After the 2 day trip to Loch Arkaig a rest day was had on the Thursday with a visit to the climbing walls at the Ice Factor.
To finish the week and get the average up a 3 Munro day was in order so Creag Meagaidh was chosen and the weather was supposed to be OK.
Started off in reasonable weather and was hoping for the clouds on the tops to dissipate through the day, how wrong.
A pleasant walk up the valley towards the Lochan along a well made path. A Dipper was seen along the river along with a large herd of Red Deer on the slopes up near the window.
As we approached the window there was a flock of around 25 birds the size of Thrushes but very grey, could not decide if these were late Ring Ouzels or Fieldfares, but very high up for them. Anyway the jury is still out on that. Up into the window and the bulk of the height had been gained already. We ended up going up the slope directly entering the window as we saw a bit of a track there, this was very dodgy towards the top with the wet ground collapsing underfoot. Got to the top of this and realised we had come up too early and the easier descent was further on.
We then got onto the plateau with little visibility and took a bearing towards the summit.
Mad Meg's Cairn came into view and we mistakenly took this as the cairn marked on the map. After much confusion and eventually deciding to ignore this and sticking to our original path we found the summit, by now it was cold due to the stopping and starting trying to find it. We headed back to the window and made quick progress on to the next summit. There was little in the way of views and the wind was picking up all the time. Making our way along the wind made progress difficult, at one point both of us were blown over, thankfully the ridge was a wide plateau at this point. A sheltered spot with a view was found for a brew and lunch. 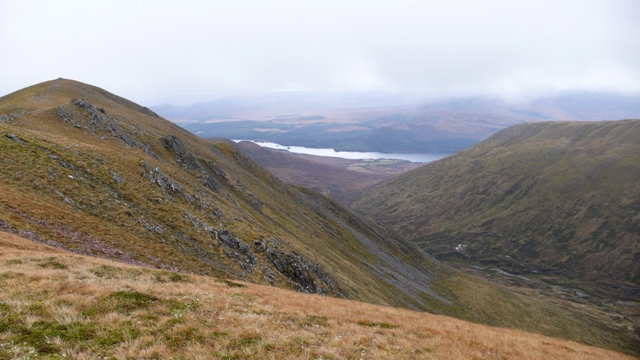 Then it was off to the final Munro of the week, Carn Laith.
This was achieved in extremely strong winds, forcing the need to drop to our knees to await the wind to abate before moving on.
The summit cairn was a brief respite from the wind. We located the start of Na Cnapanan and made good progress although it was longer than expected. On the way down 3 Black Grouse were seen and an immature Golden Eagle flew across the ridge below us and put on a bit of a display, a good way to finish the week. Back to the car and Fort William where several beers and a good dinner were consumed.

Well done Steve ,looks like you had some tough weather during your week but still managed a good tally of hills,enjoyed your reports

Both blown over but carried on to the summit

great report again Steve, real shame that the week turned out a bit grotty weather wise but you captured it really well throughout the week. I have genuinely enjoyed all 3 reports, thanks for taking the time to share your fight with the weather this week

[fingers crossed] I've not yet had the pleasure of being blown over yet on the hills... however, it is fair to say I'm more than a little fed up of the seemingly constant near gale force winds we are currently experiencing

. There is something mentally exhausting about the constant noise, chill and general relentlessness of it that wears you down.

With that in mind, much credit for your 3 reports and on sticking with the task in hand in what were clearly challenging conditions

Well said young Steve
Like others I have not been out a great deal...suffering badly from wind

Your reports are not only enjoyable, they are also motivating.... and very helpful for the Arkaig route I am planning...many thanks