The clocks went back for Winter, so an early rise sees me pick Peter up in Glasgow at 7am, knowing darkness was coming at around 5pm. As usual, we headed West, the Aonach Eagach Ridge was our aim but as we turned up the A82 after Tyndrum it became clear that the weather out west was poor.

So, we about turned and backtracked heading for Killin, where the falls of Dochart were in full flow. We couldn't resist getting the cameras out and here is my best shot: The Falls of Dochart, Killin

Ben Lawers etc had their heads in the clouds, so we just kept driving through Aberfeldy to the A9. As we approached Pitlochrie we could see Ben Vrackie and our mind was made up. Driving up, just after the Moulin hotel we got the photo of the day, which shows the beautiful colours of Autumn in the trees, suitably lit by a low sun: The car park seems very small indeed, accomodating around 12 cars, we managed to squeeze in at the end. The walk is very straightforward, a nice section through the woods, then onto open terrain with a very well defined path. Being from the west, we were then shocked to find the pair of park benches with the view down to the meandering silvery Tay. We stopped for a bite to eat and a cup of tomato soup (we'd been on the go for around 5 hours by now). We regain a view of the summit: It was then onwards up to the wee Lochan, where the summit of Ben Vrackie comes into view and the terrain changes from wide dirt track to a solid staircase all the way to the top. I suppose because of the hill' s popularity it's a necessary measure, but it's not really my cup of tea. At the top we were confronted by someone flying a stunt kite, and due to the wind level it was fair zipping around. The Indicator - not that we could see any of these markers! We stayed ontop for around 30mins hoping for a view, but began getting cold so made our descent. On the way down, we got a bit of a view: The Reflection of Ben Vrackie in it's Lochan: 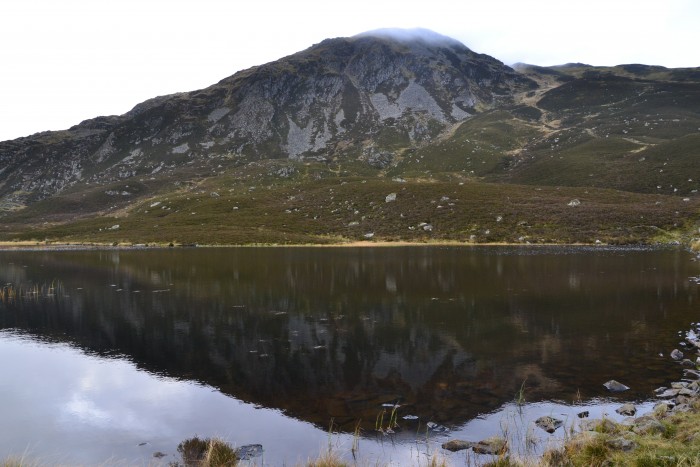 Reflection in the Lochan

The colours in your second picture are pretty much the ideal set to describe autumn.

This is a hill I've been meaning to do for some time now - looks really nice and fairly easy. Love the pics especially the Autumn colours. The kite pic is great as well but where did the giant rabbit come from? - Ha Ha

Beautiful photos JW. Looks like a great day out, bet you're happy with your choice

Looks ideal for my pre-bothy meet hill on Friday. Thank you!

That autumn scene pic is superb!! What a great time of year this is

Lovely photos. When I was up Ben Vrackie in the 1990s we were stalked by two billy goats who had serious designs on the contents of our rucksacks. They were hilarious but very determined!

I have added a video now too.