The last Munro, a cautionary tale.

The last Munro, a cautionary tale.


I had been planning this for a while, and now here I am, standing on the seashore looking up at Ben More on the island of Mull – my last Munro.
It had all started innocently enough when my father-in-law offered to take me up a hill after discovering I had taken to walking. What followed was a spectacular day on An Teallach in bright sunshine and unbelievable views. We arrived back in Inverness that night grinning from ear to ear and the colour of lobsters. I was hooked.
From here on this would be a largely solitary pursuit, a great way to defuse and reduce stress – or so I thought.
For the next few years the family trip north from the South Midlands to see the in-laws were peppered with odd day trips to climb more of those fine mountains of the North West – Slioch; Liathach; Beinn Eighe.
In between the annual Scottish trips I made frequent trips into Wales which is nearly on my door step, and so my stamina increased.
When I did return to Scotland, I began taking on groups of hills such as the South Glen Shiel Ridge and the Mamores.
I had notched up just under 150, when disaster struck, the in-laws were moving from Inverness to the Lake District! Cue a quick dash to the far north to tick off Ben More Assynt, Ben Hope and Ben Klibreck.
What was I to do? Leave it at 150 and start on the Wainwrights? The Munro itch needed to be scratched, I couldn’t stop, I just had to go back.
My wife was amazingly understanding and agreed to me taking myself off alone for a week to 10 days a year in an attempt to finish them off. Each trip had to count, there would only be so many more opportunities and I set myself the target of finishing them before I was 50. Fatal mistake, I was in my mid 40’s, the pressure was now on.
With less than 50 to go this became a full blown obsession and failure to complete them was no longer an option. Why did it matter so much? No idea, it just did.
Nothing was going to stop me in those final few years, and that stubborn attitude drove me into blizzards on Ben Chonzie and Geal Charn; stupidity such as 9 Munros in a day in Glenshee and Glen Lyon; but also fabulous days above temperature inversion cloud on Sgurr Mor, Creag Meagaidh and Ben Challum.
Back to Ben More. Why was it the last one? Perhaps not very original but it is a solitary mountain, not hard, not long, but most importantly had the added interest of the ferry trip to the Island of Mull. I had camped on the beach at its foot, and woke at sunrise on a beautiful clear warm day. I was away by 5am, I wasn’t sure about how I would react at the end, and didn’t want too many witnesses. I had chosen a route to savour rather than the straight dash to the summit, so began the steady climb across short firm grass alongside the burn Abhainn na h-uamha with its pools and cascades. However, try as I might, I could not prevent myself putting my head down and just going for it. I occasionally glanced right towards the face of Ben More, but only to check on progress.

On reaching the grassy pass at the head of the valley I turned right to begin the delightful but straightforward scramble up the rough staircase to the outlying peak of A’Chioch. Next came the sharp ridge that leads to the final rocky climb to the summit of Ben More. I climbed those last few hundred metres like a fell runner; nothing was going to stop me now. Blowing hard, sweating profusely and red in the face I made it to the summit alone….. only to be met by a man with his small son.
‘You okay?’ he asked, ‘Yes, this is my last Munro’ I gasped. ‘Oh. Umm, Well done’ he offered. ‘I wasn’t expecting anyone to be here at this time of day, could you take my photo?’ Looking back he could have told me and my attitude to push off, but being a fine Scot he duly obliged. I have to say I would not frame the resulting pictures, far more use for frightening horses or small children.
That done I walked away a few yards to leave them to their morning. How was I feeling, did I feel elated that I had finally reached my goal of climbing all the Munros? No, and I didn’t feel much at all. It took me a few moments to work out why, I had only climbed up, I hadn’t climbed down again. The job wasn’t finished yet.
The descent down the grassy slopes is a blur – partly because I was moving that fast.
I was practically running when reached my car parked at the bottom by the seashore.
I stopped, dumped my bag, and looked around almost in a state of confusion. A few yards away a young woman was sitting on the grass playing a fine melody on the fiddle. 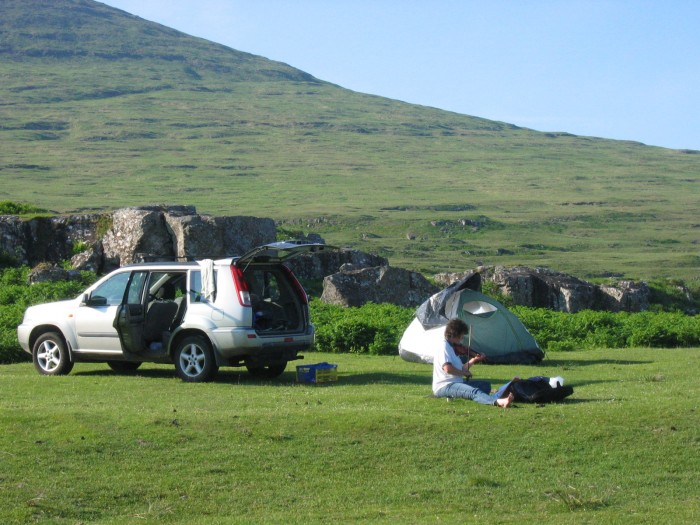 Suddenly the image of the piper on the mountain on page 5 of the SMC Munro guide came flooding back with its caption – ‘Celebration. The last Munro deserves a good tune on the pipes.’ I can tell you a good tune on the fiddle is just as good, and the floodgates were opened. I stood there with tears streaming down my face, at the age of 49, it was finally over.

There was a post script to that eventful day, my ignition lock failed whilst on the Corran Ferry, and I found myself being shuttled back and forth across the water whilst the engineer beat lumps out of my steering column. They finally freed it enough to allow me to be dumped on the landing stage, only for me to be towed up the slope by the RAC just in time before the incoming tide engulfed the car. Far too much excitement for one day.

I hope I haven’t put would-be Compleatists off, just be warned - this is additive.
What were the real highlights? Skye; winter climbs of the Forcan Ridge and Tower Ridge, and definitely An Teallach. Perhaps more on those another time.

Was it all worth it? Absolutely!

An excellent tale of an emotional roller coaster with a great ending, some lovely photos to round it off too. Congratulations seems inadequate somehow but it's all I have so........... CONGRATULATIONS Clive, it is a great achievement requiring dedication, determination, stamina, self discipline, sacrifice and just a little madness, I honestly believe that the older you get, the more this will mean

from one lone wanderer to another, well done

Very well done to you Clive and congratulations. It was great to read your reflection of working towards a goal and achieving it.

Congratulations Clive on completing your challenge, and before you turned 50 too.

Lots of things I could relate to as I was reading your report, doing most of my walking solo, having to travel great distances to bag a few more ticks, and the strange feeling of needing to finish the list. I haven't decided on my last one yet, too many to go, and I am already trying to think how I'll feel when on that last summit.

Your report is so beautifully written and you've such amazing pictures.

What an achievement, this hill has given a lot for so many people and in such a sweet location...? Abso-blummin'- lutely

Congratulations and a very enjoyable story to boot

Oh that bit with the fiddle nearly brought a tear to my eye...
Congratulations !!!!

on doing them all

What a fantastic achievement. Well done

Great stuff Clive!!! Congratulations on completing, especially with all the travelling that was involved, a truly amazing achievement

and what a fantastic day for your final one

Well done, hope you're very proud of yourself

A report I thoroughly enjoyed ! Was great that you got the weather for it !

Congratulations on a great achievement