Not enough daylight to consider the full Fairfield horseshoe, and wanting options to bail-out early if anyone wanted to, we decided to do the western side of the horseshoe, with the added advantage of ticking off Nab Scar which I had not climbed before.

Ascent to Alcock Tarn was slow but enjoyable, pausing frequently to admire the ever-changing views and marvel at how Helm Crag looks different every time. AW describes Alcock Tarn as 'dreary' but I have to disagree - I think it's lovely, and the dogs certainly enjoyed swimming in it.

Path on to Nab scar was very easy gradients but a little slippery. No sign of it on the map but reasonably distinct on the ground. Views of eastern arm of the horseshoe appeared at the last minute as the ridge was reached. Uncle Michael decided his hip had had enough and headed down to Rydal, while the rest of us continued up Heron Pike.

Set off up Heron Pike - Sarah managed to carry the rucksack for all of 50 yards before declaring it too heavy for her. A steady climb up a good path. We weren't really sure which top was Heron Pike - we ate our lunch on the second one we reached though I suspect the first is the official top.

Lovely ridge walking along to where the ascent to Great Rigg starts, then a climb up to the summit - with lots of false alarms where the next cairn really MUST be the top this time... great views from the top - weather looked a lot grimmer over to the west so we were glad we had chosen to head slightly eastward.

We had originally thought we would drop down to Grisedale Hause and down Tongue Gill, but I wasn't sure how to find the top of the path down to the hause, and Lorraine fancied bagging another Wainwright by descending over Stone Arthur.

We skirted the top of Great Rigg - not sure it was actually any easier than going over the top would have been as there was no path and it involved a lot of walking at an angle. Once we regained the path the descent as far as Stone Arthur was easy enough. An interesting feature on the top of Stone Arthur looked like someone had mounted a round table there - it turned out to be reflections from a circular puddle with an island in the middle.

Descent from Stone Arthur to Greenhead Gill was steep and tiring. The thought of the Swan Inn at the bottom was appealing, until we realized neither of us had brought any money. After briefly considering trading one of the kids for some refreshment, we headed for home satisfied with our day's walk. This was by some margin the longest and hardest walk the kids had yet done, and they coped with ease. Looks like we can get more ambitious next time we visit. Grasmere from above Alcock Tarn Windemere from the ridge above Nab Scar 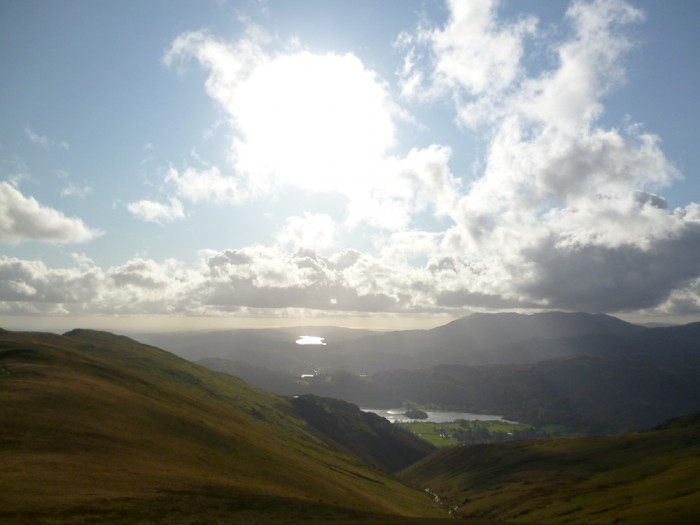 From further up the ridge Helvellyn and Fairfield from Great Rigg I enjoyed reading your report. Next time I hope you get to do the whole Fairfield Horsehoe

I've done it several times and in both directions but prefer ending with Nab Scar.

I have done the full horseshoe a few times in my youth - always starting in Ambleside and finishing in Grasmere, but coming down before reaching Nab Scar. It's a lovely walk - one of my favourites.

The advantage of the half horseshoe on this occasion was its flexibility - it could be shortened at any of several points along the way and still return to Grasmere. That and the limited hours of daylight available in November - the full horseshoe is quite a long walk to squeeze into a short day for slow walkers like us...