A Farewell To The Majestic Mammores

A Farewell To The Majestic Mammores

I decided to go for it despite some of the route being on an exposed ridge and the severe wind warning,knowing that if it got too bad i would turn back.
The walk starts from the carpark at Polldubh,i arrived at 8am and the weather was looking ok,the tops seemed clear but it was fairly breezy,even at carpark level so after spending half an hour getting kitted up i was on my way,a quick photo of the waterfalls was taken before heading into the hillside and up the well worn path where after only 10 odd steps i slipped on the boggy ground and fell

a quick check to see no one had spotted my less than gracefull slip and i was away again,plodding up the path at a more relaxed pace than normal. 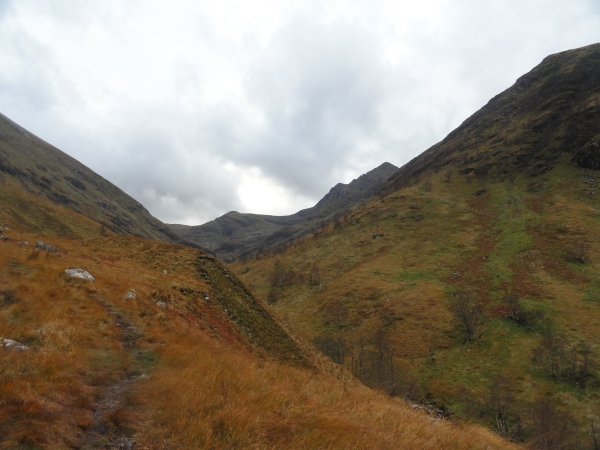 The path is easy to follow up into the glen and its gradient is also very easy going,to my left An Gearanach was dominating the views and brought back memories of the day myself and Tam followed people off of the wrong side to reach the steall bridge,what an adventure that descent turned into! Then as you continue up the glen Stob Ban comes into view and what a view it is,stunning! 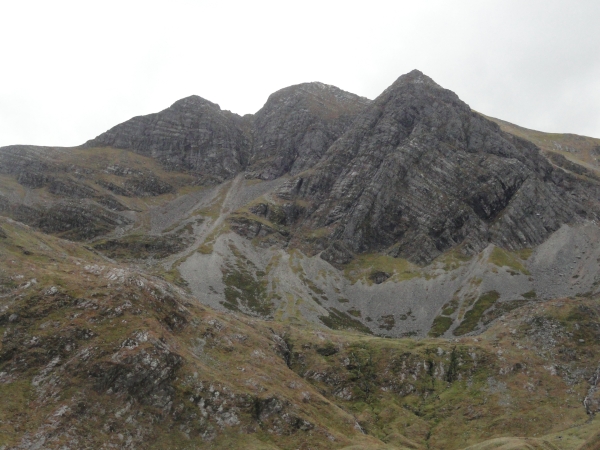 the view of Stob Ban opens up

The weather was holding out but at times the gusts of wind were pushing me off the path and it was at the fore front of my mind as i neared the bealach.Upon reaching the top of the path the wind was alot stronger but nothing too worrying yet and as i turned to head up the initial ascent to Stob Ban,the mountain itself made a grand appearance,it looks fantastic from this side although my first reaction was "geez,that looks mega steep" The views south had also opened up and it gave me the thought that today was going to continue to be a great walk with views in every direction. 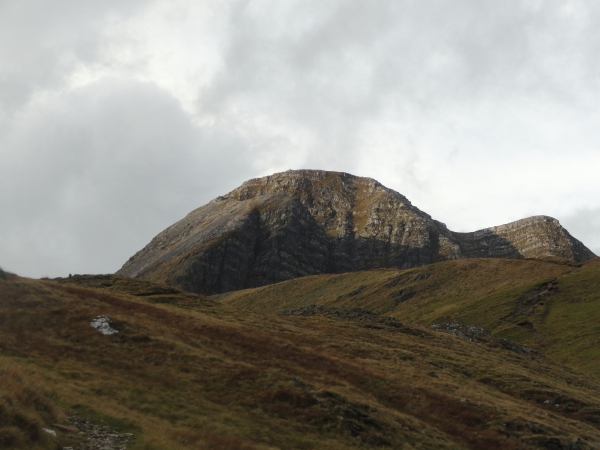 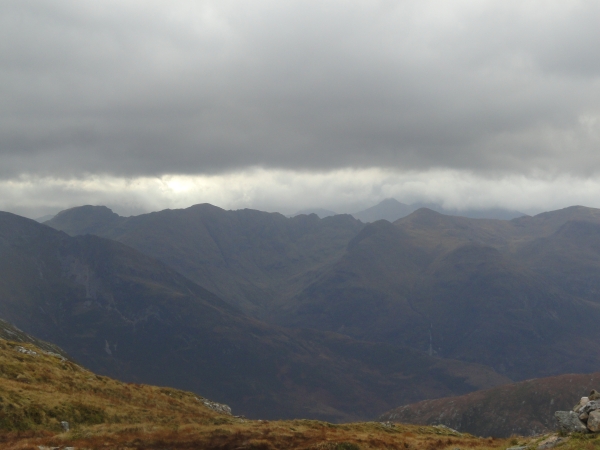 looking down toward the Aonach Eagach ridge

As i reached the final ascent to Stob Ban through the rocks the incline didnt seem to bad but because of the wind i stayed further from the edge of the hill than normal and 2 hours after leaving the van i stepped onto the summit and was blown away by the views.Ben Nevis was still being coy and hiding in the cloud but the 'ring of steall' was now apparent,i could even see the akward bit on the devils ridge,An Gearanach was proudly showing itself and looking west i could see the walk out to Mullach nan Coirean,the second Munro of the day.i sat on the summit,taking a 20 minute break to have some coffee and a snack while taking in the views and absorbing the surroundings and something that was written by astrid on a walk report recently came to mind
"When we reconnect with the natural world around us, we are focused. Time stands still because we are in the moment. In the present real time. No past, no future. Just the here and now"
i couldnt agree more as i sat there,taking it all in and enjoying the peacefull remoteness that hillwalking serves up. 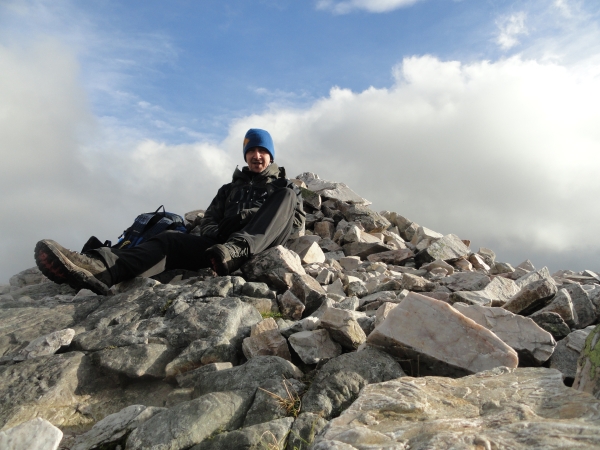 the summit of Stob Ban 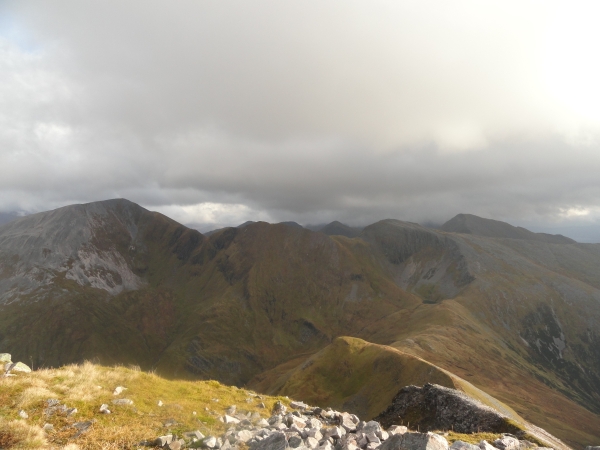 the 'Ring of Steall' 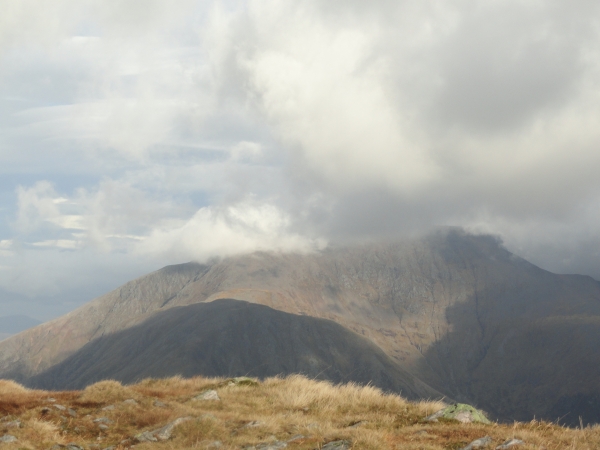 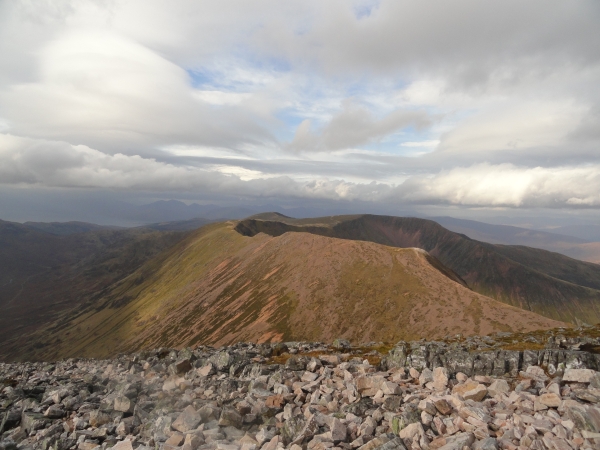 I'll admit,i had to drag myself away from the summit,probably due to the fact that upon heading to Mullach nan Coirean i would be finishing the Mammores which had started with an ascent of Na Gruagaichen in blizzard conditions almost a year to the day and that i might not walk in these fantastic hills for a good while.

Off i went down the path and it was a very enjoyable walk despite the gust of wind knocking me off my feet every so often and again i stayed off of the ridge for safety reasons.The walk to Mullach nan Coirean was fairly short with gentle inclines and before i knew it i reached the second summit of this glorious day,Mullach nan Coirean. 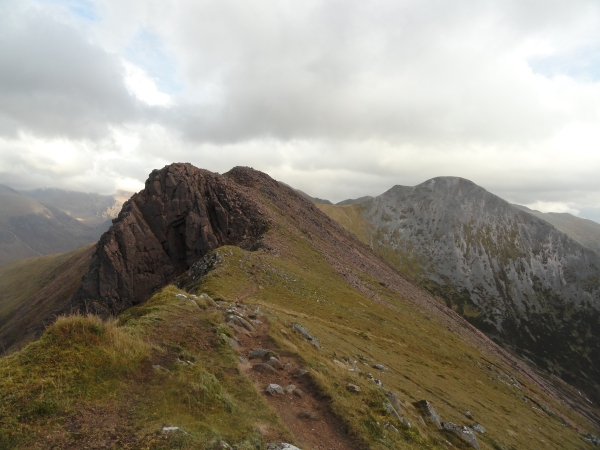 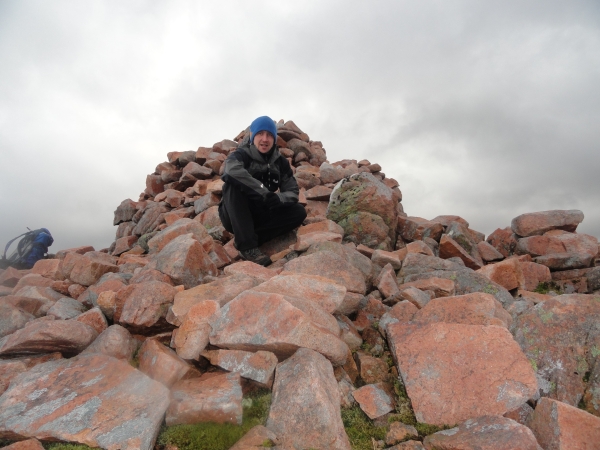 Upon reaching this summit the wind picked up and the gusts were throwing me about,it was difficult to stay standing so i huddled in to the summit cairn to enjoy my lunch and get some shelter from the elements,still absorbing the surroundings and the beautiful views i was getting.i sat for a while hoping the wind speed would ease but it showed no signs of letting up,infact the gusts seemed to be getting stronger so i cautiously set off down the narrow ridge,occasionally having to stop and hold onto some rocks to prevent myself from being blown over the edge and once i got further down and as the ridge broadened the wind died down which was a relief.the path down to the forest soon became very boggy and slippy and slowed down my progress. 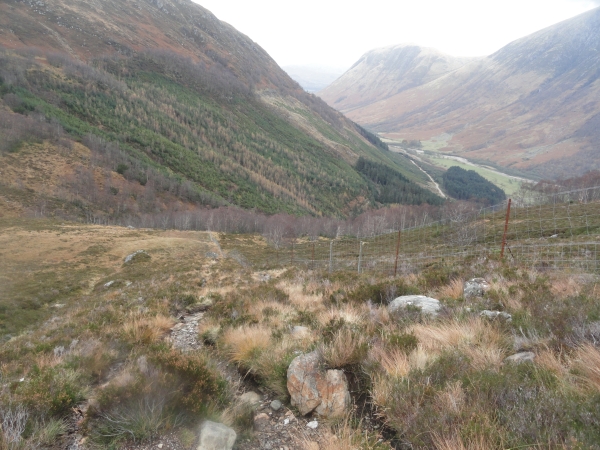 the path to the (felled) forest area

After a while i reached the stile and entered more boggy ground where the trees have been felled,which was murder to walk through.there are bits of the path here which have been re-done and are very good but for the majority its a bog-fest until you reach the track which takes you into the forest and once at the end of this,just as it turns back on itself i took the path down through the forest toward the road which comes out a short way from the carpark.

after getting changed i left the carpark with a heavy heart,the Mammores have provided 4 days walking for me and i loved every one of them,they were all done in different weather conditions.the first time in the snow and blizzards where i got to use my crampons for the first time on Na Gruagiachen,before taking the wrong route off due to the snow and no visibility, 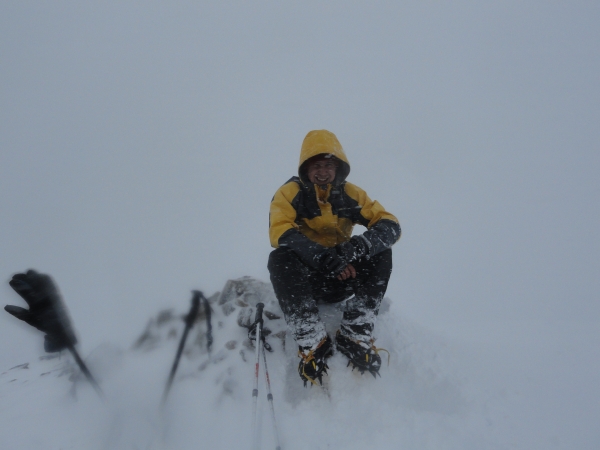 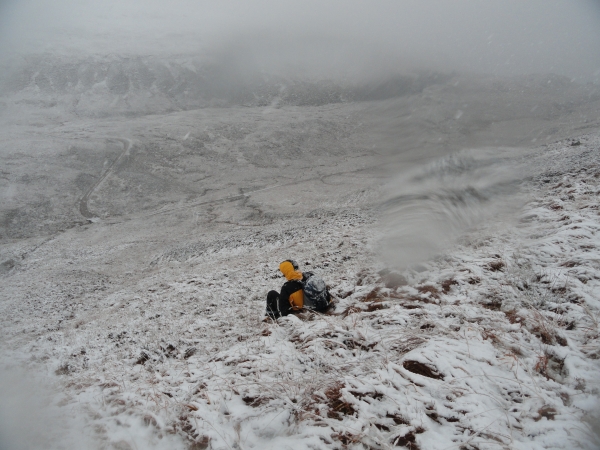 our route off of Na Graugaichean 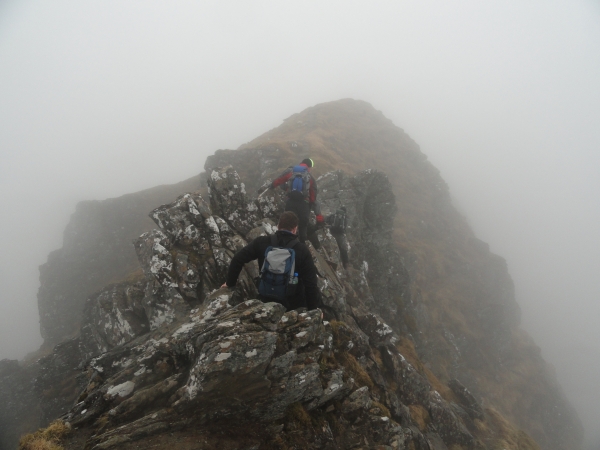 the devils ridge on the ring of Steall 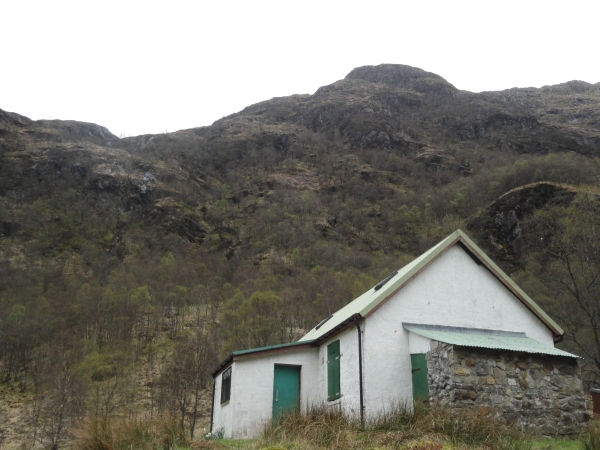 and the 3rd day where myself and Tam had a great day walking Sgurr Eilde Mor, Binnein Beag and Binnein Mor,a day where i took one of my favourite photos ever of Sgurr Eilde Mor and will never forget the views of the pap of Glencoe as we walked out to the lodge. 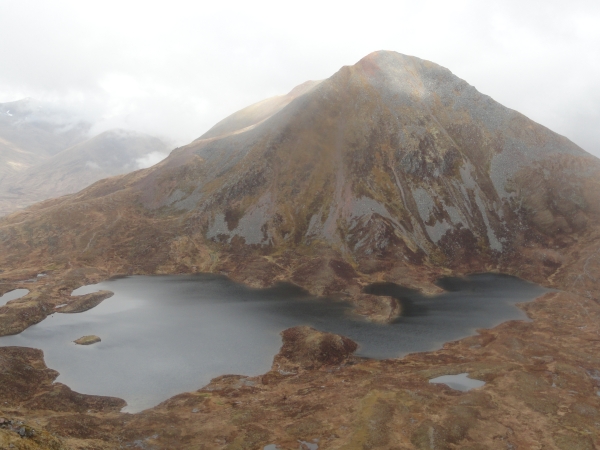 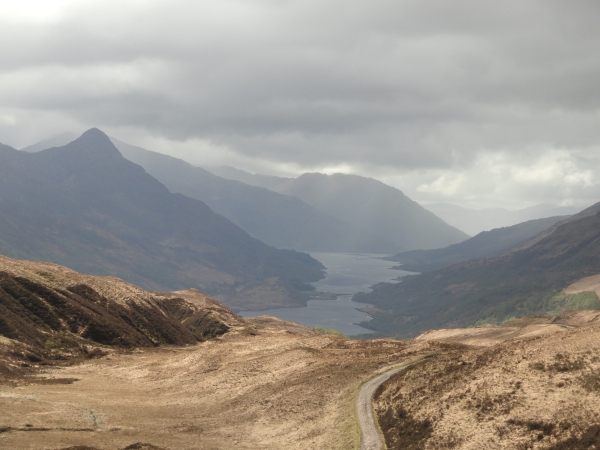 the Pap of Glencoe

The Mammores are a special place with great hills and scenery and an area i will look forward to walking in again,although it may be a while before i get back here to enjoy some more fine days walking but i'll never forget the days i've enjoyed here and the memories will last forever

Another day without getting soaked!!!! Fair enough you did nearly get blown to your death a few times though

Loved your photos, especially the older ones

I'm with you on these magnificent hills. I've loved every walk I've done on these hills, even though my knees might not agree. Loved ther picture of Sgurr Eilde Mor

And as for Stob Ban

One of my favourite hills

An amazing view of those cliffs as you walk your ascent path up.

Great report Iain, and a great read with fine pics ..... Well done.....you've inspired me to get back and finish them off too....

polly- the weather was great (which to me means no rain

) but its amazing how much the wind gusts can move you 2-3 feet no problem.the older photos bring back great memories

peteR- got to agree on the views on the ascent path,such a nice walk in to the bealach and a really good ridge walk out to mullach with extensive views

bod- they are great hills and on a fine day like i had its a fantastic walk,cant wait to go back on my second round(if i ever finish the first one,lol

by the way peteR.....did me and tam happen to meet you on the walkout from an castiel and beinn a'chroin in april '10'?

iainwatson wrote:by the way peteR.....did me and tam happen to meet you on the walkout from an castiel and beinn a'chroin in april '10'?

Hi Ian. Unfortunately I made the mistake of saying to MrsR I couldn't remember what I was doing in April 2010 and she reminded me in no uncertain terms that we got married that month

Ooopps Had a look at my walk diary after I'd picked myself up off the floor, but it wasn't me on these two in April 2010.

sound peteR,must have been someone that looked like you,hope your wife has stopped slapping you

Good to meet you yesterday - mountain goat that you are. I too would like to have chilled out at the summit but we knew we had that long walk out - never got back until 1830. Congrats on the 142.

cheers kev,was good to meet you too and i enjoyed having company for a change on what was a fairly big walk

sorry for not saying goodbye properly,i was convinced i would have passed you guys on the way out.i arrived at the carpark for 4:30 and got home for 7

was a smashing walk

Jeezo Iain, the walk out was grim by the end. Mr Blobby would have passed us and by the last few miles we wouldn't even have noticed. It was like Night of the Living Dead! Good to catch up unexpectedly on Alder and share a bit of the walk with you.

Hey Ian,
Good report. My favourite area of all the Scottish mountains. Been there a few times. Some nice photos, you posing as usual

Your getting around them quickly.

Need to meet up again soon.