Deepdale Horseshoe with a twist

Deepdale Horseshoe with a twist


This was my first serious walk sine July but I couldn't resist the prospect of a long day on the fells in such glorious November weather.

I started at Dockray and headed up over the many summits of Common Fell, Watermillock Common, Brown Hills and then up to the first proper summit of the day on Birkett Fell at 756m. That climb reminded me how long it had been since I had been up a hill and took much longer than I had planned and once up there I could see the round I had planned for the first time, which looked very daunting. But the weather was fabulous and I still had lots of hours before dusk so off I went across the grassy ridge towards Hart Side and Stybarrow Dodd. By the time I got to that point I felt more comfortable about finishing the round so decided to go for it.

The remainder of the ridge to Watson's Dodd, Great Dodd, Calfhow Pike and Clough Head is easy walking on grass but a little boggy in places. Just as I was approaching Clough Head summit there was a cold breeze coming up from the west which suddenly shrouded me in mist. It was a strange experience on what had been such a clear day but it cleared as quickly as it came. From there I headed north east to White Pike and then down onto the old coach road that runs below Wolf Crags back to Dockray. The five miles along the coach road was probably the hardest part of the day, but that is only because I'm so unfit and my legs were starting to seriously object to being asked to travel so far after four months of doing nothing

Here are some pictures I took on my BlackBery, which is why they aren't very clear. The picture of Clough Head cairn was taken during the only 60 seconds of bad weather in the seven hours I was out!

It's good to be back 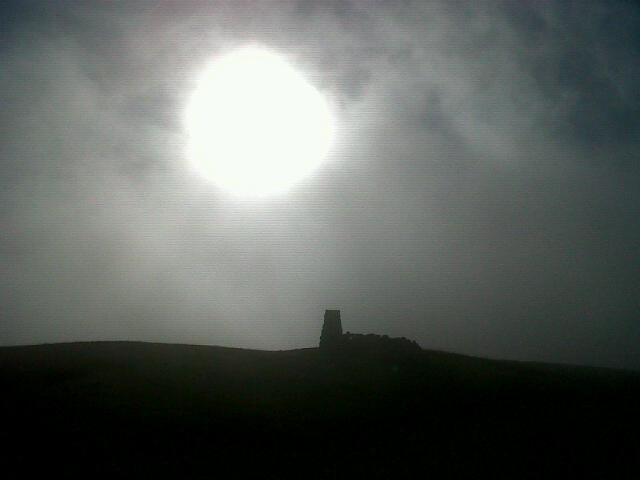