After many years of looking up towards Cruach Ardrain whilst driving from Tyndrum towards Crainlarich on my many trips home from West Coast ventures, it was time to climb the mountain. It always amuses me the random pattern of events and circumstances that determine your next mountain destination. Yes, I do plan trips to an extent, but there seems to be a element of destiny and fate that decides where to go next. This adds even more to the satifaction of exploring our wonderful mountain landscape.......

Valerie had informed me last week that this weekend was to be the best opportunity for a while with fair weather conditions and low winds, so we were up and away from the house at 7.15am and were walking by 9.30am. It was a fine run through via Loch Earn and then we headed to Balquhidder. The early morning setting a long Loch Voil was beautiful with lingering mists and then we arrived at the carpark just a few hundred metres back from Inverlochlarig. Cruach Ardrain and Beinn Tulaichean are two lovely mountain summits each with their own very fine characteristcs, and a good path connecting them. This path is obvious and well used at the high bealach/summit levels as many walkers tackling the hills from the Crianlarich side also use this a route to and from Beinn Tulaichean. I would point out though that the main climbing and descent roues from Inverlochlarig Glen are not obvious and are steep and boggy. Worth noting depending on how at home you are when walking off the beaten track. 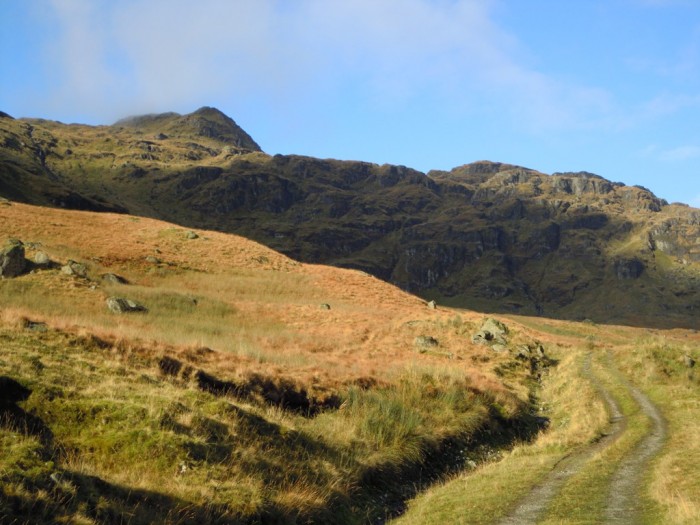 Cruach Adrain with the crags of Creagan Duhba below. 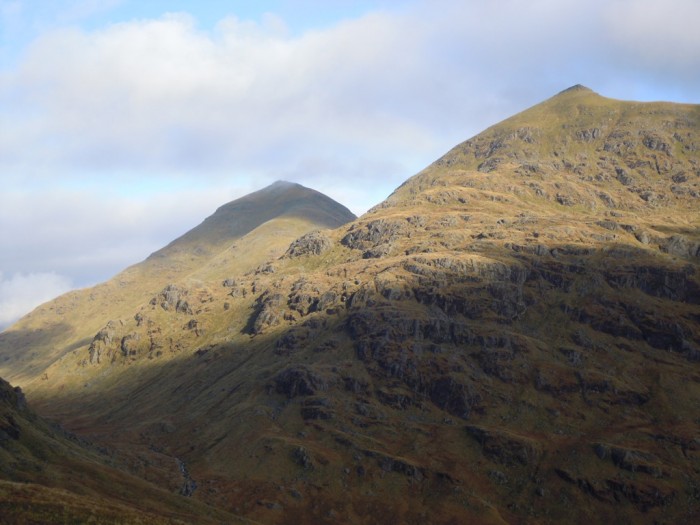 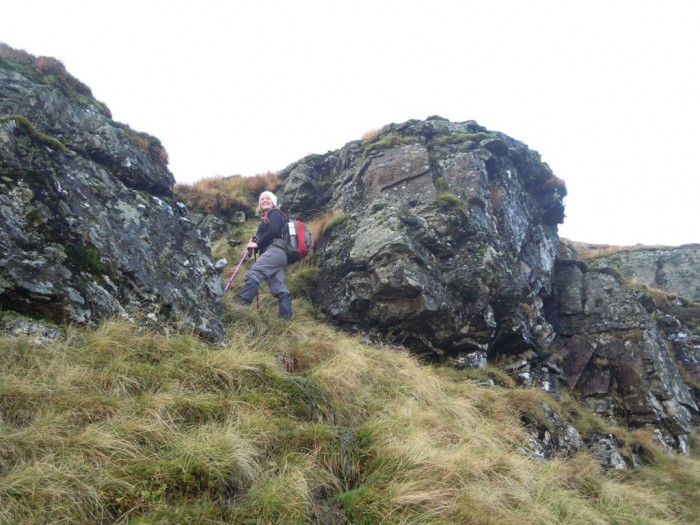 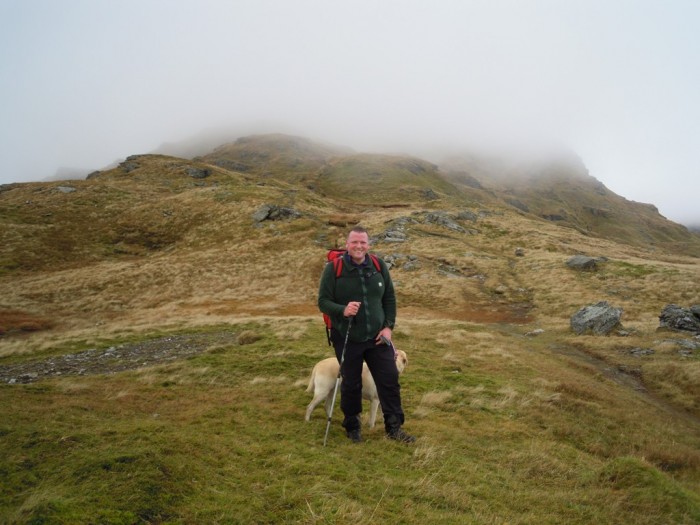 On the bealach and 'oh is it about to cloud over?' 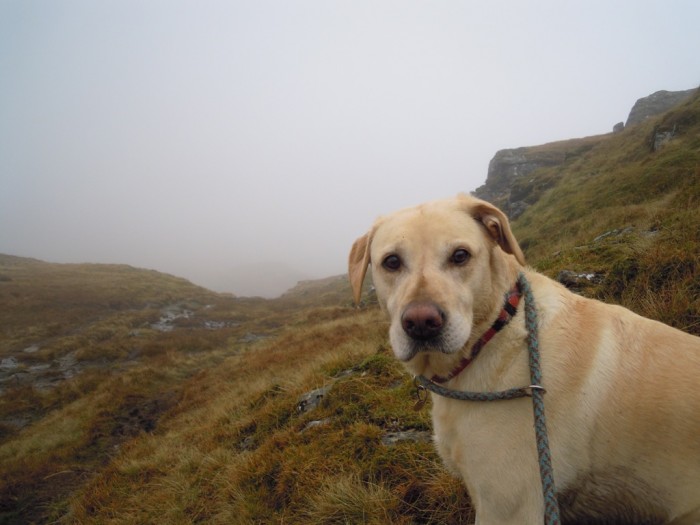 Ritchie thinking 'Where is she?' 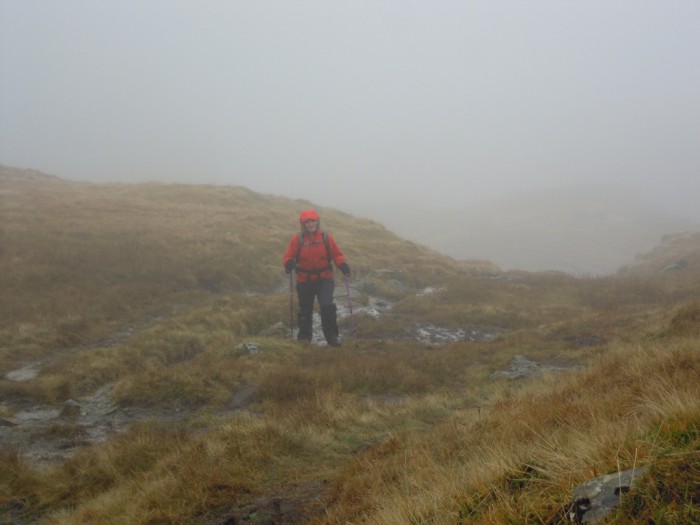 Oh here she comes, having put on her over-trousers back to front! 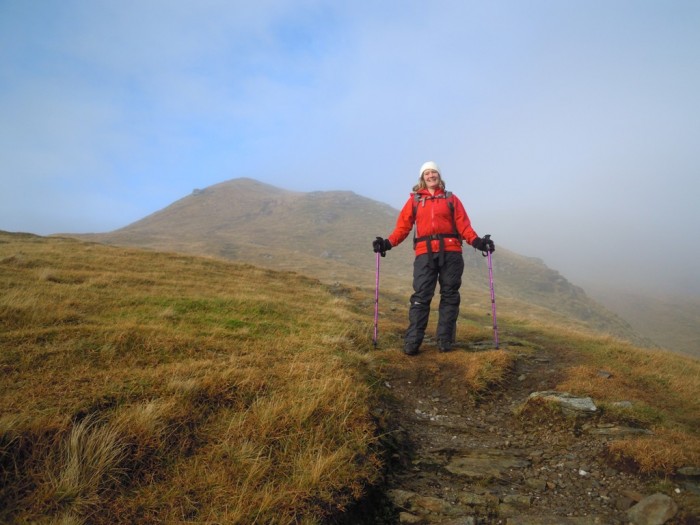 Emerging out of the cloud again, after some great chat with fellow walkers heading back down. 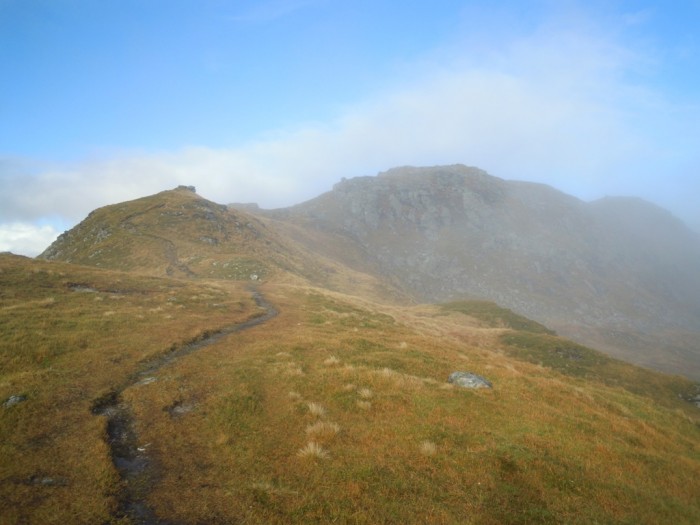 A nice swinging round approach to the summit of Cruach Ardrain. 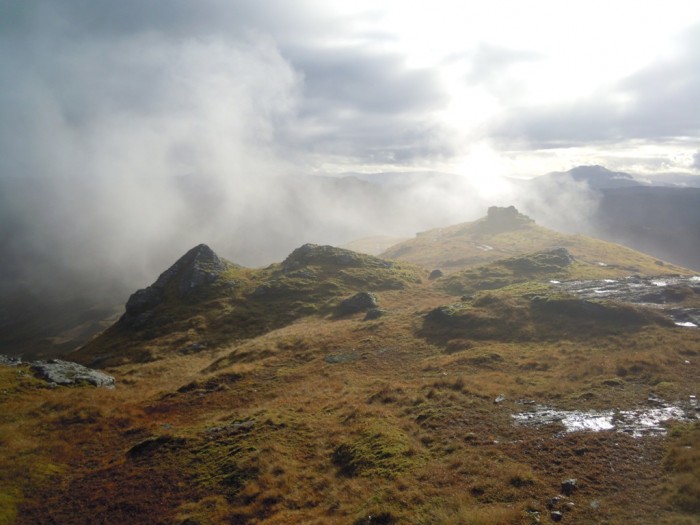 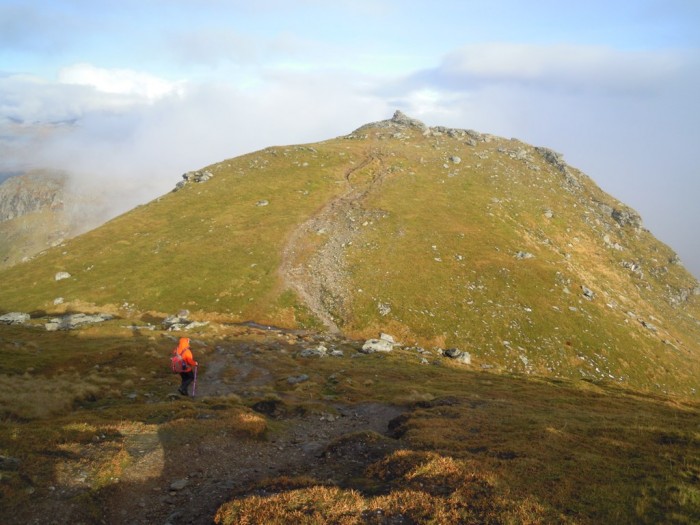 A final drop then up to the summit cairn. 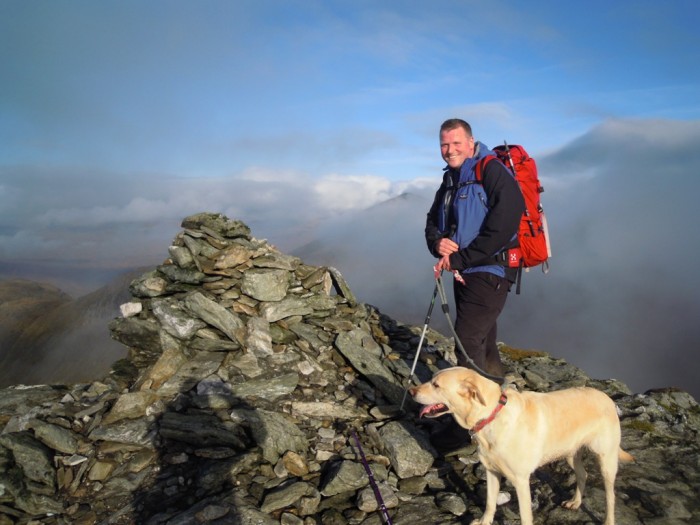 As happy as ever and ready for a bite to eat. We were able to sit for a few moments and savour the moments. 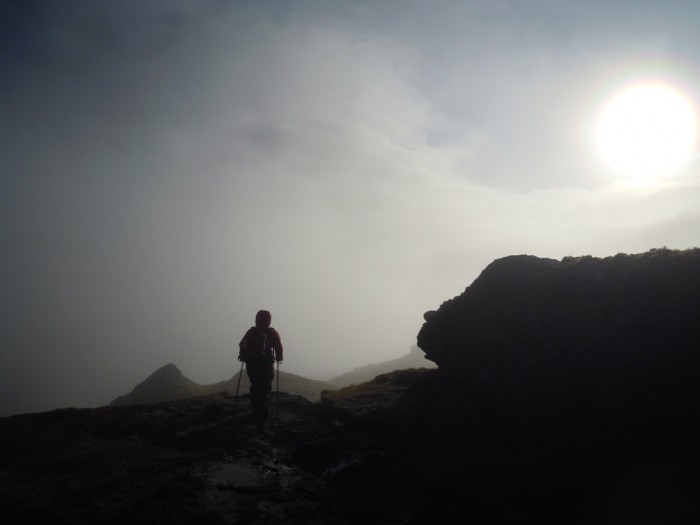 On our way back round this magnificent mountain top. 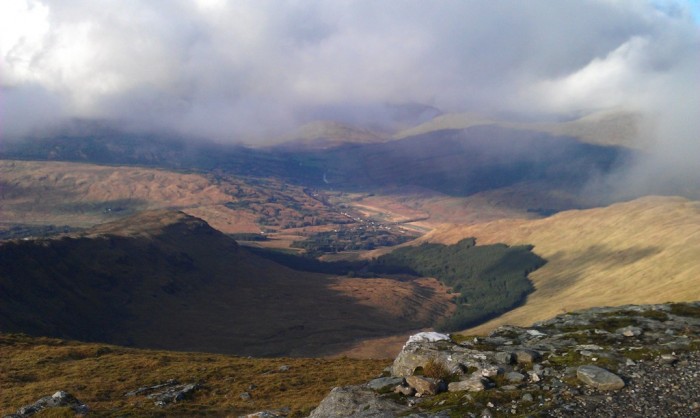 Retreating back to the bealach with Beinn Tulaichean in our sights. This lochan was shrouded in cloud on our way up. Now a chance for one of my favourites - the lochan shot! A view back to Cruach Ardrain. The summit cairn with beautiful surroundings. Loch Voil appears, from where we approached this morning along the lochside single track road. A rugged and fascinating area just south of the summit. A view back down into Inverlochlarig. Quite a view to say the least!

We were back down off Beinn Tulaichean in good time as we were due back for a party at neighbour's house in the evening, and I don't like to miss out when there's a wee hoolie on the go, but first we had a small rescue operation to carry out. Earlier that morning we had met a nice lady with her dog Jack. They had driven up the glen to park up and conduct test samples from the burn as part of an on-going study. They have a red car that you are able to spot in one of my later photos. Anyway, when we initially met earlier, Jack had attempted to follow us up the mountainside and had to be coaxed back to his owner. We met again when coming off the mountain as Jack had jumped onto his owner's lap as they retreated down the glen and the car swerved into a muddy ditch! Between ourselves and another walker who was able to get his 4x4 from the carpark all was eventually well with no damage done.......some good banter and stories to tell.
We also met some lovely people during the day on the connecting ridge, spent much time exchanging tales and this all added to a great day. Where to next? The Cobbler I say..........

Two fine hills , some nice photo's and a rescue to finish up , a good day out !

Fantastic to see you, Valerie and Ritchie having a sunny day out on the hills for once

Not done these for a while but your photos are enticing.

Cheers folks, looking so forward to getting out again!

Thanks for posting Bod, I was planning to get up these two last time home but things changed and now I'm hoping to get there next week when I get back on dry land and hopefully this mild weather has held.
Your photos have shown great looking hills and given me a good idea what to expect, cheers again.

nice one bod(and val),good to see you were out enjoying the good weather,did these ages ago and never got many pics due to the weather so its great to re-live this walk through your pics

see you in Arrochar next week

Great report. I did these hills 7 days earlier and it's nice to see what views I would have got if the clag hadn't hung around all day.

A fine report Bod of two fine hills, i had the pleasure of doing these in in the snow with clear blue sky. It's allways good to meet fellow walkers on the hills who are willing to have a chat. There have been a few tales recently of walkers being ignored so good to see they are the minority

Nice to see what it looked like from those two summits!

That's the great thing about this site - being able to share experiences as no two days on a hill are exactly the same.

Nice one Bod, Fine report, thanks for sharing.

We did this walk yesterday too from the Crainlarich side,didnt have time to do Tulaichean though as darkness was closing in when we were descending from Cruach Adrain.Was a perfect day for it..some cracking views. Rather than return via the ridge we dropped down into the valley to follow the river back to the layby and had a huge battle with really wet,boggy land untill we got on to the landrover track...was a nightmare, and the last couple of miles was in darkness....great hill though.

dogplodder wrote:Nice to see what it looked like from those two summits!

That's the great thing about this site - being able to share experiences as no two days on a hill are exactly the same.

Hi Dogplodder,
When there are sheep close by I always have Ritchie on the lead. He takes absolutely no interest in them when on the lead, and I don't experiment in case he took a whim whilst running loose. So some hills he gets plenty of freedom and others I take great care depending on the nature of livestock. (Learnt that from my days on my Grandfather's hill farm as a child)
Totally agree about us sharing our days,
Cheers the noo, Bod