With my four-year stint in Scotland coming to an end in two weeks I wanted to try and make the most of the great weekend forecast, do a couple of the higher munros, and visit Glencoe/Ft William one last time. I chose the Aonachs and also came up with a plan to do the Braeriach traverse on Sun/Mon which would give me the ten highest munros before I head home and 150 total. Needless to say, the Aonach's zapped that plan. Aside from climbing Snowdon with the WH gang back in Oct, I hadn't been up a hill since the Kintail meet in early Sept. Come to find out, my fitness level had fallen off and my absence from the hills came back to bite me.

I was up and away from St Andrews by 5:30. By the time I hit Rannoch Mor and Glencoe the sun had started tickling the hills. It is an image I'll keep with me for a long time. What a perfect morning. I love Glencoe, it was a love at first sight thing, and I will take a lot of fond memories of the place back with me. Sadly I didn't take any pics through that stretch of road because I knew I had to get to Glen Nevis and start my walk so I could finish by dark. This was also my first trip down Glen Nevis, shame I didn't make it there before - very nice. I started my walk around 9 and soon I caught my first glimpse of Steall Falls. From there it was an easy stroll to the path that breaks left and heads up toward Sgurr a' Bhuic and Aonach Beag. 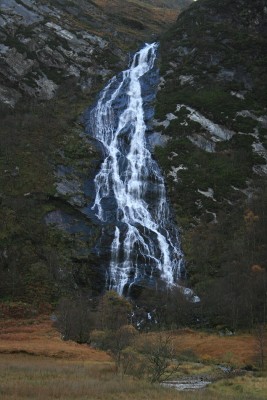 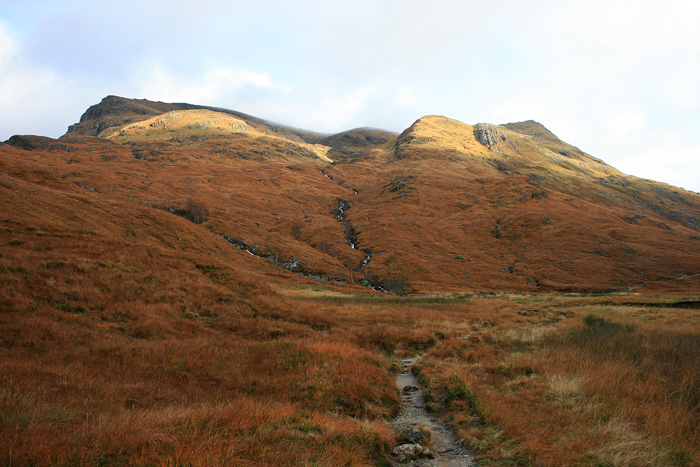 Just after the bridge at the Steall ruins I followed a good path heading up toward the coire. Halfway up my two month layoff started catching up to me and I started huffing and puffing. Finally I made it to a point just below the ridge of Sgurr a' Bhuic and I cut right and climbed up onto it. From the top the views toward Sgurr Choinnich Mor were very nice so I snapped a few shots and took a bit of a break to ease the pain I was now dealing with. On my way up the ridge to Aonach Beag I started cramping in both legs - drats. At least I got to see my first brocken spectre on the final ascent. By the time I reached the summit I had already convinced myself that the Braeriach traverse and wildcamp I had planned was not going to happen. At the top I had a chat with two friendly walkers and sent a text to Gammy Leg Walker. I told him I wouldn't be sticking with my plans and asked if he could get out to do something easier Sunday. Then I made my way over to Aonach Mor which was actually the easiest bit of walking I did all day. Cheers to the walker who snapped a photo of me at the summit, there is no telling how long it will be until I stand on another munro summit - flights aren't cheap these days! On Aonach Mor I figured I was about 30 mins behind schedule so I didn't linger very long. The path down to the bealach between Aonach Mor and Carn Mor Dearg is very steep and I wouldn't want any part of it when it's frozen. I took my time and got down ok but it seemed to take me ages. Then I began the 'eternity' of walking out across the very wet and muddy glen back to the Steall ruins. There was hardly a dry place to step in this section of the route, but I really enjoyed the views of the Mamores and that took my mind off the slog a bit. By the time I reached the path at the Steall ruins I was completely knackered. But I had to keep moving as I knew it was getting late. I had planned on meeting Paul and Helen at a pub in Ft William after the walk as they were in the area. So I shuffled back to the car and finished my walk in 7 1/2 hours - 30 mins more than I expected. I was filthy and wore out, more so than I had been after a walk in a long time. I got in the car, turned off Viewranger on my phone, and tried to get a signal so I could text Paul. At that point my phone died. Hmmm, where is my spare battery . . . oh yeah, I took that out after the Kintail meet in Sept. Ruh roh. Not only could I not contact Paul, I also couldn't let Gammy know that I was safely off the hill. So I did what any American would do - I headed to McD's to hatch a plan to contact them both. After two tasty cheeseburgers I decided I would drive to the Clachaig in Glencoe and see if they would let me use their computer so I could send the guys a PM on the site as I didn't know their mobile numbers from memory. It was about 5:30 at that time. Thankfully they had no problem with my request and I was able to send them a message saying I was ok. Gammy responded quickly and noted that he was beginning to 'twitch'. Very glad no one had to alert the police, but I felt pretty dumb for leaving my spare battery behind.

I'm heading stateside with 146 munros under my belt and a nice handful of Corbetts to boot. Over basically a 2 1/2 year period I've managed to have some incredible experiences on my hillwalking journeys. Without them, I'm not sure I would have lasted in St Andrews as long as I have. These two hills made for tough going, but I won't forget the challenge or the views I had on this day. It was certainly bittersweet driving back home and reflecting on all the great times I've had in the highlands and in Scotland as a whole. This is truly a fantastic country, with equally fantastic people!

Certainly a more contemplative/reflective tone than your usual reports. Sure you'll be back many times in the years to come

. How long does it last for?

Its been a pleasure to be in your company this year and a pity I never made it on more trips with you and gammy.
Hopefully you can get back over in years to come so I can experience more wild camping with you

I wish I had been out with you guys this weekend, And im sorry I cannot make the trip to the cobbler next weekend

All the best mate
Alan

Great way to go out....for the time being anyway esp that you got your brocken spectre

Maybe no munros for a while but least you'll have your McDs. Best wishes

Sorry Ive just noticed I put a wee confused smilie on my post, dont know how I managed that

Great report by a great man

.
Glad you finally got to see a brocken spectre!
And also that you had some decent weather before you left...fingers crossed for next weekend also.

Cheers everyone. This certainly got me in a more reflective mood Dougie, I'm sure I'll spend the next two weeks reliving a lot of my best moments here.

Looking forward to seeing some of you Saturday for the Cobbler, fingers crossed for a repeat of this weekend's weather.

its amazing how much fitness you can lose from not being out regular so a great effort here andy,the pics are really good as always and its such a nice area to walk in

bring on threading the needle next week!

Great pics, especially the spectre. I saw one (not as good as yours though) on Fuar Tholl on Saturday, but it disappeared by the time I got my camera ready

We tried to climb Aonach Beag and Aonach Mor last year but we had to turn back half way, weather was really nasty. Hopefully next year...

I haven't met you but feel I have through all your postings and banter on this site.

You will be missed but I'm sure you'll keep posting. Good luck.

Great report there buddy, the quality of your photo's are fantastic. Like they have been hand painted each time !!!