These 2 were fairly straightforward, was a bit breezy though. Didn't take too long which was nice as the nights are fair drawing in.

The head of Loch Awe is about 14 miles after Tyndrum, and after Dalmally it's the road signposted Stronmilchan with Loch Awe on the left. There's a makeshift layby/passing place just before the bridge with limited space (3 cars?) and possibly room for a mini or something after the bridge.

Over the bridge and through a cattle grid gate then you can see basically the entire route: Landrover track, then faint path uphill to the ridge between 2 Munros. Plenty of cattle & sheep to keep you company lower down: Looking back to Kilchurn Castle: There's a small cairn marking the path leading up to Beinn Eunaich. This is a steep path & it might be easier to go up it, I came down this way & fell over a couple of times. The Landrover track descends to cross a burn, then upwards again and turn right at the fork. Soon you reach another cairn marking the start of a very faint path uphill to the ridge. Gets a bit steeper now and you gain height quickly. Looking over to Beinn Eunaich: MWIS had forecasted stong winds but it hadn't been too bad up till this point, the winds were picking up as I got higher and were quite severe up on the ridge. I tried making it along to this rocky bit but was getting blown about too much for comfort so I sensibly decided to go back down instead. As I went back I realised the wind was being channelled onto lower parts of the ridge so I had been at the worst part and the wind might ease off further along. One Mars Bar later I decided to go back up & test this theory - still gusting up there but not too bad so I made it to Beinn a'Chochuill cairn. Ridge path to Beinn Eunaich looked OK but climb to summit looked steepish & might be tricky in wind. Was getting a bit of experience in windy conditions so went onwards. Camera wasn't out too much as everything was getting blown about. There's a steep scree path up to summit, low cloud had come down by the time I got to cairn. Then it's a gentle descent on the path past a couple of peat bogs, not too muddy though. 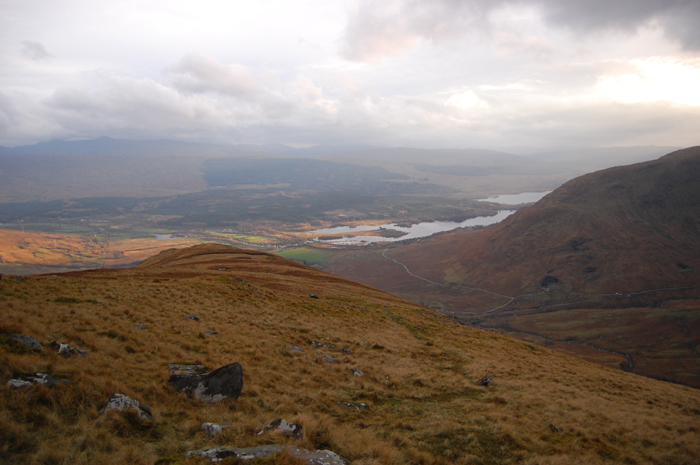 The path then turns to the right to steeply descend after about 1.7km. This was probably the dodgiest bit for me, the ground tore away under my boots a couple of times & I could see divots where this had happened regularly. I would definitely think about going up this way instead - there's a cairn marking the start of ascent on the track below. Straightforward back to car from here.

Nice report have to agree about the route here. I did the same yesterday and went up in between the two Munros. Very steep descent when you come off Eunaich lost my footing a few times....westie did fine though