First report in quite a while...

The realities of shorter days and lack of remaining holidays meant I was unable to resist the propect of good weather over the NW. Aside from an aborted attempt on Beinn Liath Mhor a couple of years ago, I hadn't made much impression on the vast mountain land around Glenn Carron. The route taking in these 2 Munros fulfilled my criteria for this late autumn walk - namely that the long walk out on landrover track would be easily done in the dark if necessary.


our_route.gpx Open full screen  NB: Walkhighlands is not responsible for the accuracy of gpx files in users posts
I set off from Craig just before 10am in cool conditions under ever-changing skies. The track to the wire bridge across the Allt a' Chonais is uneventful but pleasant and a nice way to ease into a hillwalk. 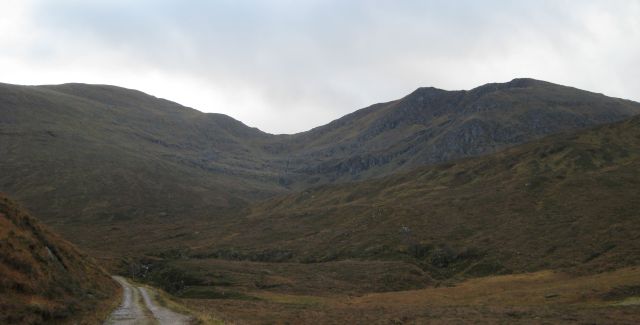 . Fortunately, the river was low and easily crossed on stepping stones. The next section was on a decent path up to the Bhealach Bhearnais with Sgurr Choinnich a constant companion on the left. 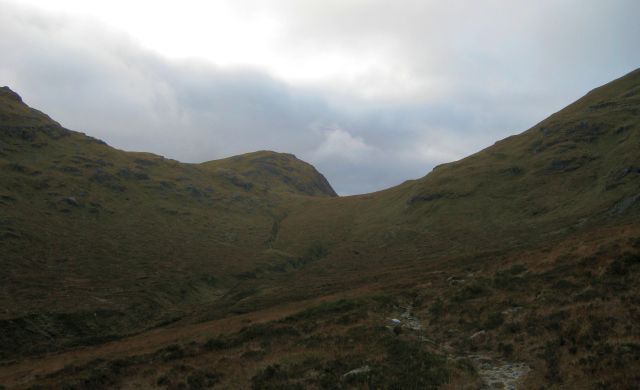 The onward route was an enjoyable 400m climb with a couple of easy scrambly sections to the summit of SC. 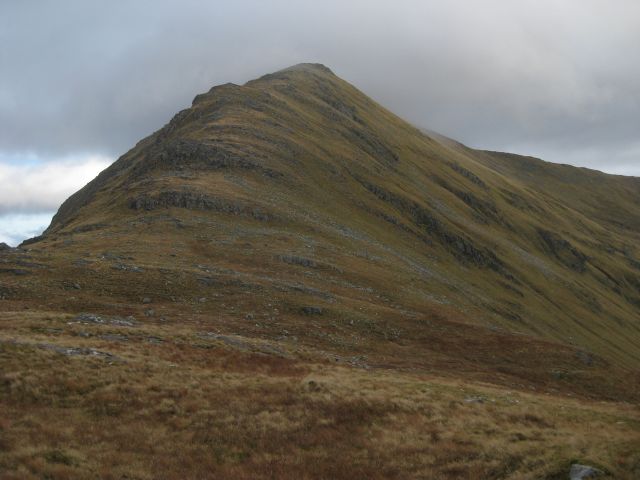 The final ascent was along an airy ridge with the cloud pouring in from the SW over Lurg Mhor then down and up over the summit. 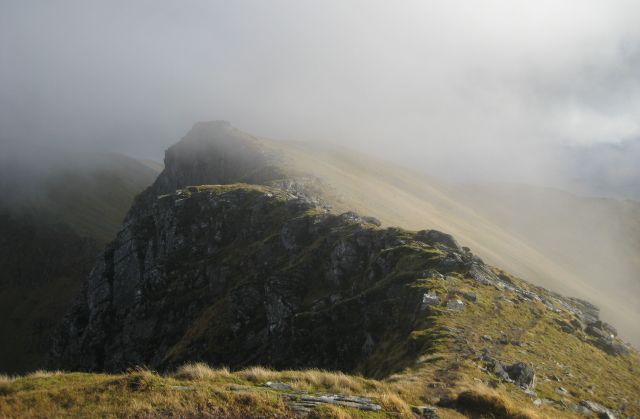 It was windy and cold and I was happy to take shelter in the lee of the hill just a few feet below the small summit cairn. The short next section down to the col between the 2 Munros was a struggle as the wind had really picked up and my hands temporarily lost circulation! Despite that, the view SE along Loch Monar was worth it. 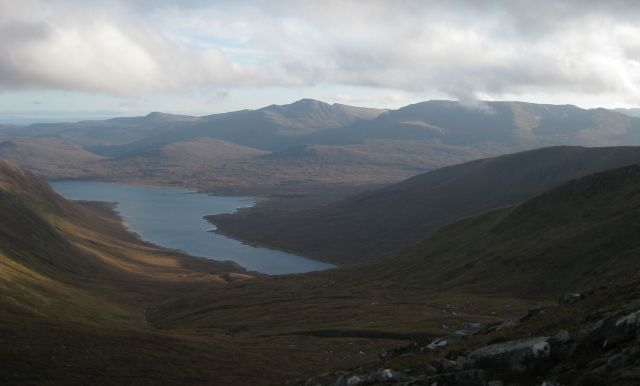 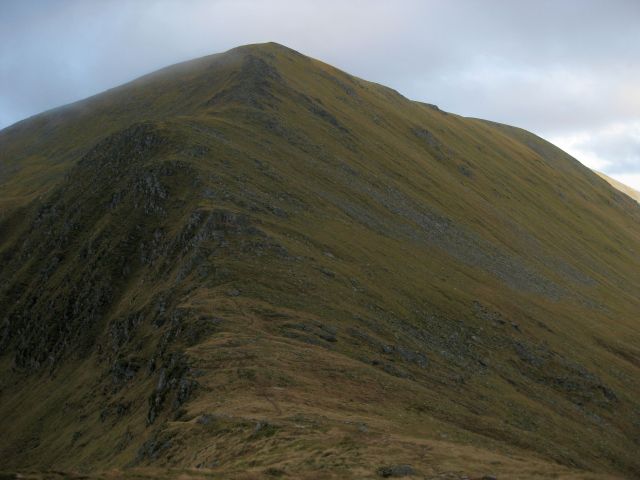 From the col it was just a short climb to the summit of Sgurr a' Chaorachain, again in cloud. However, the wind was strong enough that I thought it might blow over and I was also well ahead of schedule so took a seat in the summit shelter in the hope of things clearing. After about 10 minutes I was ready to leave when the cloud suddenly lifted 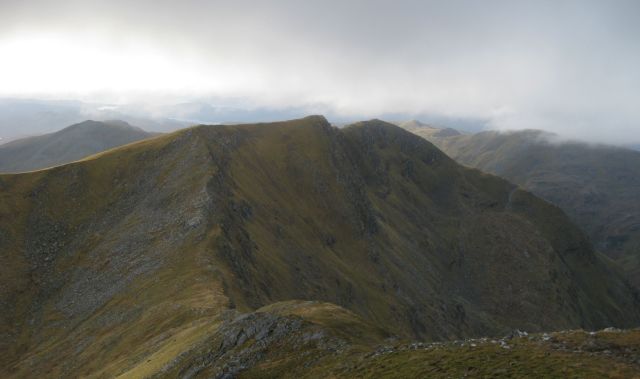 I started snapping away and finally got a few decent shots of Maoile Lunndaidh, Glenuaig and across the glen to Sgurr nan Ceannachain and Moruisg - good things etc etc. 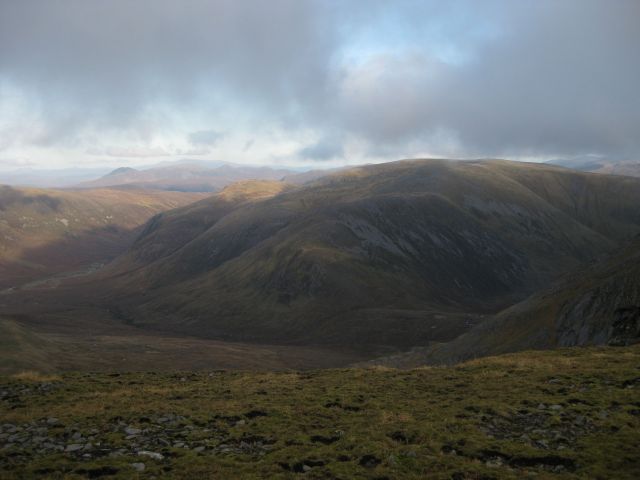 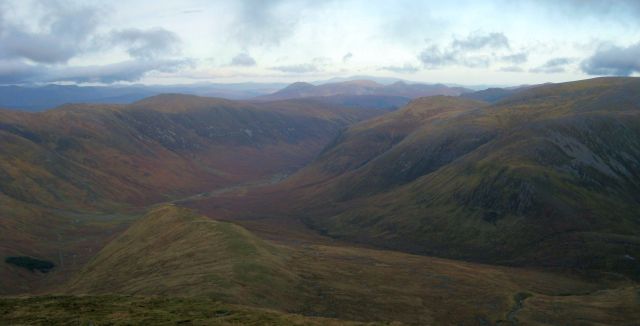 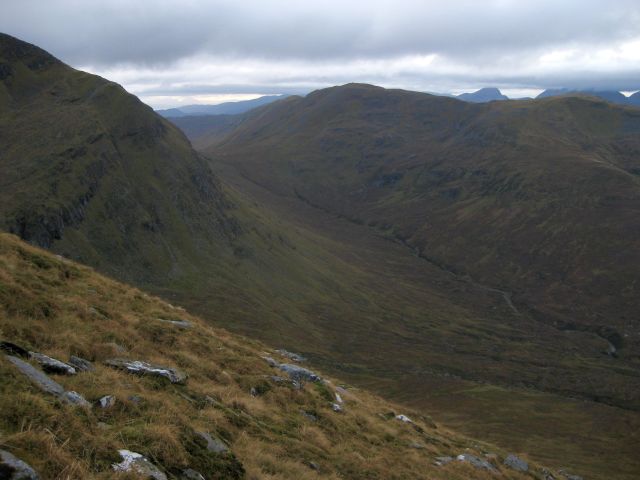 The descent N began easily enough but soon steepened. It may have been grassy but was still unpleasant and I was relieved to reach flatter ground above the Allt Leathad an Tobair. I crossed the stream and bog-hopped to rejoin the Bhealach Bhearnais path. I was back on the track by 4pm, a good hour before I thought I might be. 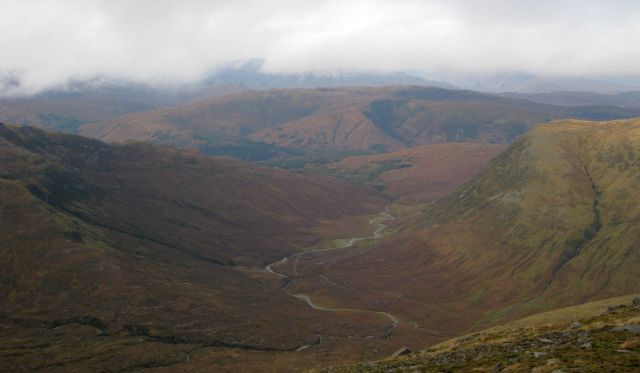 . I got back to the car just as darkness fell. The weather may not have been quite as good as forecast but this was still a really enjoyable day out

. Even the 3.1/2 hour drive back to Midlothian couldn't dampen spirits.

Well done Leithy, a long way to travel but looks like you had a good day out. Thanks

You should have good reason to be pleased with a walk like that, even if the conditions were 'hand-numbing' I think we have all been at the mercy of windchill at times

Excellent stuff Dougie, afraid I never made it to this area, but it looks fantastic.

Nice report and some excellent pictures

This is an area I haven't ventured into yet, so your report is an excellent reference for planning for 2012

Nice report Leithy, I am hoping to do these two Munros before the end of the year so thanks for some beta, I did Moruisg last week and had a few glimpse towards these hills, i also suffered the same chilling winds

. It certainly is a fantastic area.

. I am lucky in that my partner's family live in Moray so I can escape at short notice without worrying about finding or paying for accomodation

. It's not right next to any hills but about an hour's drive from Cairngorms/Fannaichs/Torridon and - as in this case - Glen Carron.

Haven't climbed up here yet but must get round to it sometime.

and my hands temporarily lost circulation!

Nice one, been eyeing these up too this year.....maybe a definite next year. Been reviewing gloves too, cheers the noo.....

D'you know leithy I don't think I've ever seen a report for these two. Nice one.

Nice one Leithy, still got a lot to do in this area including these two. Is the landrover track good for cycling?

Wow Leithy, that's some walk. You really enjoyed your day out in spite of the cold

Nice report from a part of the country I have never been to, very handy having family staying close by

Yes, it is very smooth.

You got some good views there - and piccies.

Cheers - here's to the start of the better half of the year for walking.

I have been looking into this area recently, I'm sure your report will come in handy when the time comes.

Nice report and pics by the way.