I absolutely love Kintail and just recently have enjoyed some great days on the hills to the north of Glen Shiel, which I’ve decided will be tackled from east to west – that way I get to salivate over the 5 Sisters as I make my way west!!!! I’ve already had great days on Sgurr nan Conbhairean and A’Chralaig/Mullach Fraoch-choire, as well as my slight misadventure on the South Glen Shiel Ridge (least said, soonest mended as my old mother would have said). Now it was the turn of the Corbett Am Bathach and its somewhat reclusive bigger cousin Ciste Dubh.

I’d also had it in my mind to attempt the Brothers Ridge as part of the same day (via Sgurr an Fhuarail), but for reasons which will I’ll explain later on I decided to kick that plan into touch. And in retrospect I’m glad I did. Rather than rushing around like a blue bottomed you-know-what trying to get the hills ticked off and down before losing the light I was able to relax a bit and take it easy. And despite the reason the Brothers got dingied I had a great day on two good hills.

Not that the trip up had been that pleasant. Thick fog on the way up had made it slow progress at times with visibility as good as to the end of my nose

And the wildlife were doing their bit too to slow me up. Jonny-the-fox playing chicken, young stags not following the Tufty code and some flapping thing flying out the darkness and straight at the car veering off at the final second over the roof (I ducked for some unknown reason

). Oh, and a fair way into my journey I’d remembered my lithium battery was still in the charger at home, so my camera was out of action. I had a reserve that took AA batteries, but it’s not as good so before I’d even started I was feeling a bit peeved with myself

But eventually I arrived and parked up. Time for the usual Sunday breakfast of porridge, get myself suited and booted and then head off back along the main road a short distance to the old metal gate in the fence and the start of the excellent path that winds its way up the steep slopes of the Corbett. The start of the day - looks promising Autumn colours on Am Bathach ascent Fair to say this path was boggy in places. When have I said that before? Oh, yeah.....on pretty much every walk I’ve been on recently, and I’d be saying it again on this walk too. And oh, how I’d be saying it. I just didn’t realise it yet

I had one rather spectacular sip on the way up (which I’d probably score 10 for artistic interpretation but only about 3 for technical ability), but I managed to spare myself from getting too filthy

Anyway, back to the ascent up Am Bathach. As well as its boggy patches it also seemed pretty steep too. Nothing technical, just energy sapping steep. I got caught by a young chap who had been parking up just as I was heading off and stopped for a few minutes chin-wag about the hills, other hills and even more hills. He then left me for dust and I didn’t see him again until I was huffing and puffing up Ciste Dubh and he was heading down to attempt at least Aonach Meadhoin of the Brothers.

Back to Am Bathach, again

Soon enough I was on the ridge itself, enjoying a pleasant stroll along the easy grassy path to the Corbett summit. Despite being a diminutive hill amongst such illustrious company the views from the summit were spectacular Toward the Am Bathach summit

Back down the ridge to Loch Cluanie View back along Am Bathach from summit

Ahead to the big bulk of Ciste Dubh Ciste Dubh - the next destination - from Am Bathach summit

And also to the bealach between Ciste Dubh and the Brothers After a short break it was a steep descent down to the Bealach a Choinich and onward to Ciste Dubh. And here is the reason why I decided to ditch any plans of attempting the Brothers Ridge on this walk and instead concentrating on the circuit of Am Bathach and Ciste Dubh only. You see, the bealach is an undulating and increasing boggy place, which to be fair I didn’t mind despite another impressive slip which saw me execute a partial bum slide (I managed to graze the bog rather than go for the full blown sit down protest

But it was when I started the steep climb up onto the main ridge and the intriguing summit of An Cnapach that my love affair with the bog ended. It was awful

A perfect hideous mixture of steep, extremely boggy wet ground on what felt like a vertical incline made for very slow going. My energy levels just seemed to be drained from me

And the thought of a return trip down this muck and across the bog fest of the Bealach a Choinich didn’t appeal. No, the Brother’s Ridge was definitely for my next instalment of Kintail Adventures, when I could approach them from the main road and avoid that bog. It's amazing how a bit of sunshine can make the worst bog look somehow appealing :( For now I was content to continue at a leisurely pace to the summit of Ciste Dubh and then descend via it’s east ridge into An Caorann Mor and back to the car that way.

Once past the bog the path was actually excellent. I enjoyed the diversion of the route up onto An Cnapach, rather than the bypass path. An Cnapach and Ciste Dubh Ciste Dubh from An Cnapach Loch Cluanie and Am Bathach from Ciste Dubh An Cnapach and some Brothers from Ciste Dubh Stopped here for a while and just enjoyed the peace and quiet. I was joined for a short while by a chap who had been up in Torridon and was heading back to Glasgow and had stopped off to tick this hill off. We had a good chat about hills, as you’d expect. He was heading back via the bog land we had both endured on the way up, by I was sticking to my chosen descent route.

The initial descent is steep, on grassy slopes. It feels almost vertical, but wasn’t difficult. I just picked a route down finding footing on grassy ledges. My descent route off Ciste Dubh 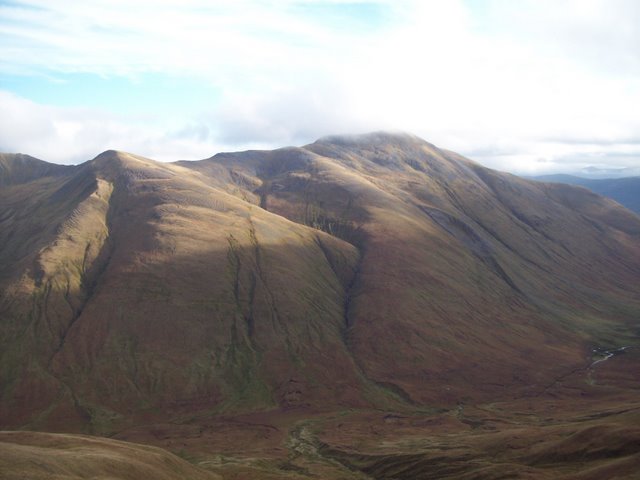 Soon enough I was on leveller ground, but rather than head almost immediately right on gentle slopes I decided to carry on along the ridge. Hindsight’s a wonderful thing isn’t it? Basically I was on more steep ground descending off the ridge, which slowed me down a bit, but eventually I was down and heading back to the car through An Caorann Mor. Rather than make my way to the path I initially stuck close to the Allt a Chaorainn Mhoir, which gave some good views back to Ciste Dubh. It got a bit boggy in places, but nothing like as bad as earlier and I was able to motor along. Ciste Dubh from An Caorann Mor Last look back to Ciste Dubh

Eventually hit the landrover track and made quick time back to the road.

All in all, this was a great day out. The weather wasn’t as good as some had had elsewhere at the weekend, but I was happy enough. Can’t wait for my next Kintail Adventure......

Another good one Pete, you're not have getting out and about. When i did these i saw very little.

Having not been on Am Bathach I can't comment

, but Ciste Dudh is a absolute peach

The views are magnificent,well that can be seen from the photos

We had been across the Brothers' and decided to cross the bealach to Ciste Dubh- glad we did, magic.
Cheers for the reminder

Great stuff Pete, glad to see that no serious drama occurred this time (other than 'grazing' the bog

) seems bog is all around now......time for the big freeze I think. Some great shots on a beautiful day in the hills, my kind of weather

The mountains in Kintail are second to none and I look forward to every report from that area. I've recently climbed Am Bathach and Ciste Dubh, using almost exactly the same route as you (only a different descent from Ciste Dhubh, directly below the rocks of The Chest) and I absolutely loved the experience.
The 3 Brothers don't take that much time, I managed to do them in 7.5 hours, climbing from Bealach an Lapain, and that allowing plenty of time for breaks and taking pictures

Outstanding photos Peter,
You have produced a score of reports lately all good.

Have you considered moving up there

Well done again pete ,you're no half racking them up

A great read Pete. Not done Ciste Dubh yet, but Am Bathach is certainly one of the finest of my 40 Corbetts to date. Got a good eyeful of Ciste Dubh that day and cannot wait to get up there.