With the forecast for the beginning of the week looking good, I drove up to Achnashellach on Sunday and stayed for two nights at Ledgowan Lodge Hotel bunkhouse. I had it to myself on the Sunday evening and on the Monday evening there were two guys up from Shrewsbury.
The bulk of the Munros that I have got left to do are in the N.W.Highlands so this was an extra bonus at this time of year to get a couple done and a lay of the land.
I arrived at the red telephone box at the beginning of the track that takes you up to Achnashellach station, cross the railway line
then follow the track taking a left turn shortly. 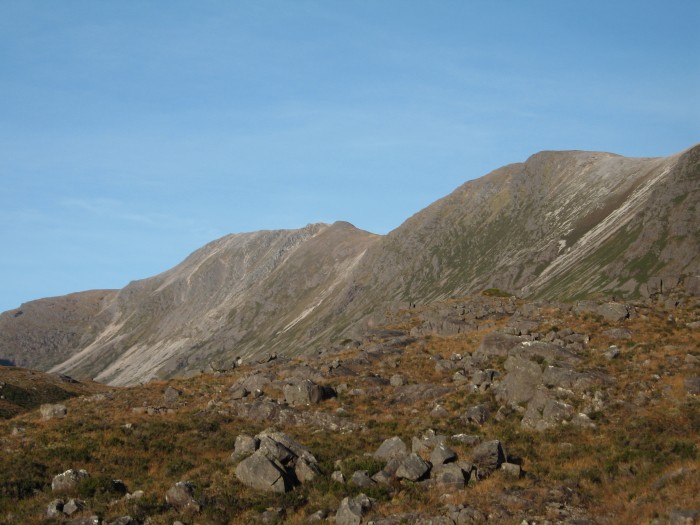 Eventually you pick up a path that follows the east bank of the river up through the forrest then coming onto more open hillside and at about 370m you pick a path going off to the left, cross the river and headed up to the bealach. This was where I had a problem. I could not find the path that would take me north to the summit. I worked my way across past some lochans and Loch Bhealaich Mhoir. Still could not pick up the path to take me to the summit, so worked my way up the steep slope until I reached the summit ridge opposite a small Lochan at 904m. Turned left to go up the ridge to the summit cairn. It was hard to believe that it was early November as the views were excellent and could see for miles. Stayed there for about 30 minutes having lunch and taking photos. Skye in the distance

I took the same route of ascent for the decent and still taking photos. On the road down from the summit ridge I picked up the path for the last quarter of the steep slope which took me too the track just below the bealach though it is difficult to see. Any how was a great day out in superb conditions.

Great report. Love the pics. Hope the weather keeps for next week.