Did this route on Saturday; out of the house in Alva at 0630, picked up my mate then straight up and ready to go at 9am.

Walk up the valley was fine, steep in places but nothing too dramatic. Got more interesting nearer to Stob Ban : Took us two and quarter hours to summit Stob Ban. The weather had been grey all morning, but no rain. Also it was mild for Novermber, but was feeling the winds at the summit, so didn't linger. 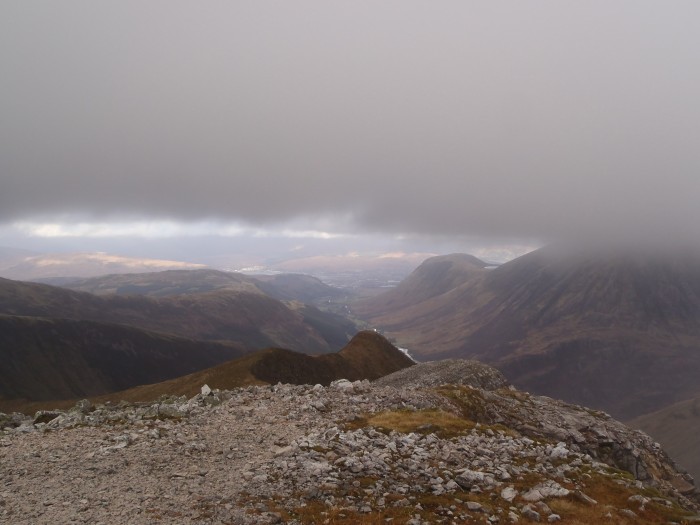 Descended through the boulder field and onwards to MnC. Stayed clear, so walk along the edge of Coire Dearg was enjoyable. Took another hour to get to MnC. The two guys that were ahead of us had gone on to Meall a Chaorainn, but was feeeling pretty done in by now. Also I am mega conservative when it comes to short winter days, so quick bite to eat then prepared to descend. Descent was straightforward, although a bit wet. But when you climb the stile into the forest section it became a bit of a bog fest. Would've been completely fed up had we done the walk in reverse and schlepped through that at the start.

Had a pass for the evening, so after a coffee in Fort William, headed off the Red Squirrel to set up camp. Was more or less dark by 4.45, so where else to go but the pub?

Claghaig is in the middle of some refurbishment, so only 2 ales on tap, plus Carlsberg. Was standing room only later as the Lancaster(?) University Hiking Club were in town. Apparently there were 50 of them?! Anyway was good to have a lively atmosphere.

Will build up to the Ring of Steall - maybe next year after my New Year resolutions turn me into a bronzed athlete.

We'll be doing this tomorrow (Sat) in similar fashion, leaving from Larbert 06:30 and doing the same route.

Nice to know to do Stob Ban first and miss the boggy terrain.

Great pics for this time of year as well.