Hungry horse on Hope and romantic sheep on Loyal

Hungry horse on Hope and romantic sheep on Loyal


We climbed Ben Hope on 15th October and were on Ben Loyal three days later but since I don't have too many pics from either day I'll post them together.

We started the ascent of Ben Hope at Alltnacaillich farm which is not far north of the beehive-shaped broch Dun Dornaigil (worth a visit). Our dog then was a lab Danny who couldn't get enough of water and as soon as he was out the car made straight for a muddy ditch for his usual wallow.

There was a loose horse hanging around who seemed rather taken with our dog and perhaps with the benefit of hindsight I made the mistake of being a bit too friendly with him. 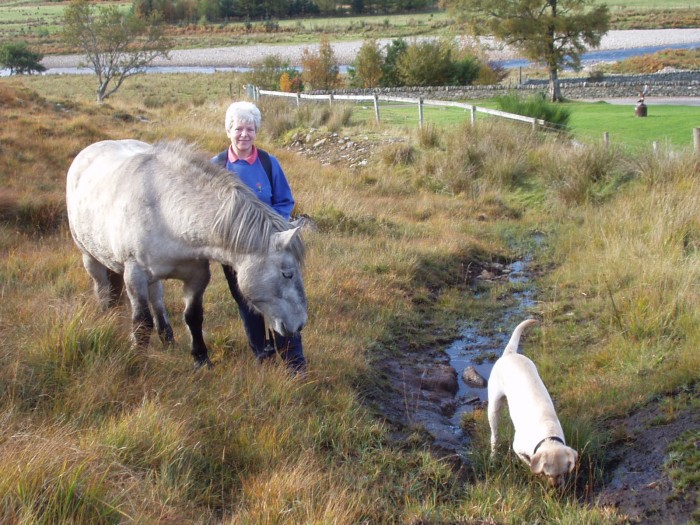 I say too friendly because he decided to join us on our climb up to the ridge and when we walked faster to try and shake him off he just broke into a trot to keep up!

Horse on a mission 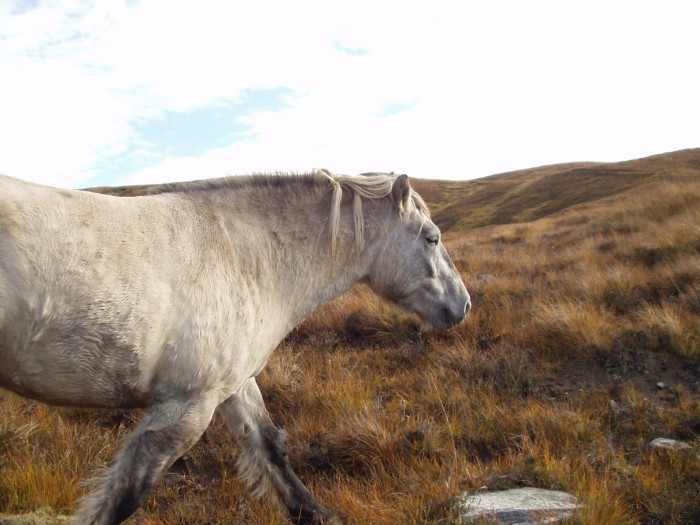 We followed a path up the south side of the Allt na Caillich burn, which means old woman's burn (so good route for me then), and has some fine waterfalls cascading down from Leitir Mhuiseil ridge. 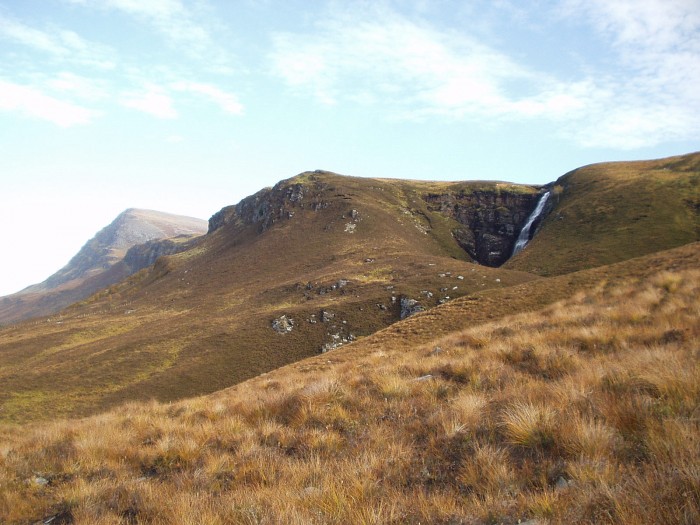 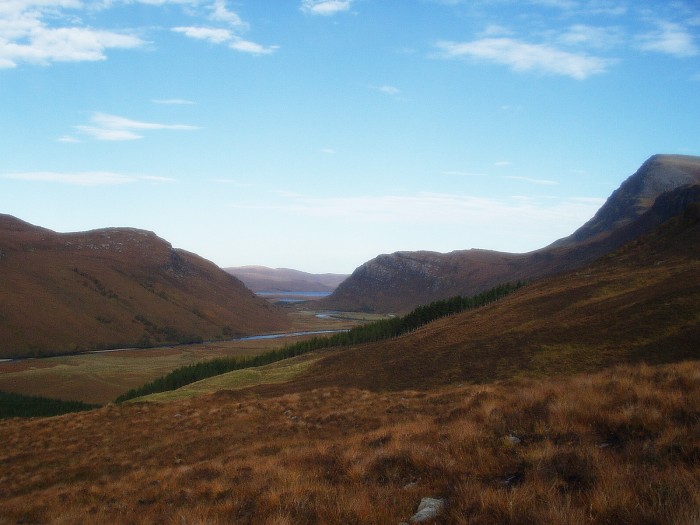 I'm no horse whisperer (more of a dog person) but I tried everything I could think of to suggest to this horse that horses shouldn't be going off with people they don't know and they certainly shouldn't be climbing hills like this. I spoke to him quite firmly and said in my most calm and assertive voice (Cesar Millan would have been impressed) "Go home" pointing down the hill to the now distant farm. But he was having none of it. In fact he was becoming increasingly focussed on Pete's rucksack and at one point made a bit of a charge for it which neither Pete nor Danny much liked. 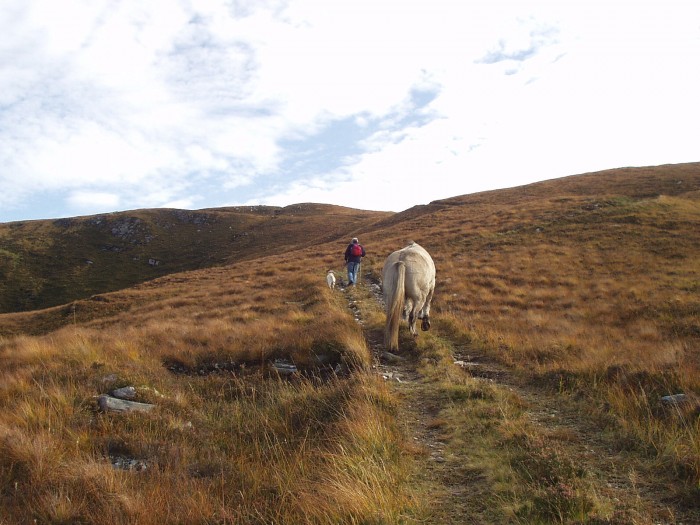 The penny then dropped. This gentle equine giant had met hill walkers before and he was hiking with us in hope - stirred by fond memories of cheese and ham rolls and the occasional apple. The poor chap was hungry! But he evidently felt we weren't getting the message quickly enough and made another spirited charge after the red rucksack. It was at that point my long suffering husband delivered an ultimatum. "If you want me to climb this hill with you (big concession in the first place) you have to get rid of this horse! It's either him or me!" 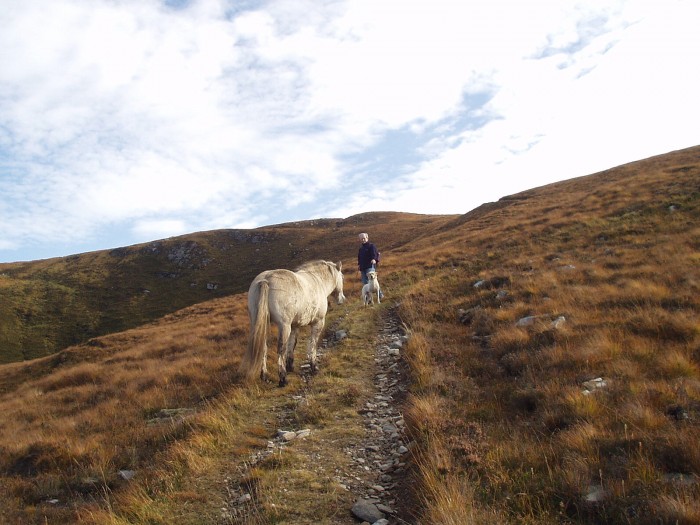 So what do I do now? Then I saw my chance. We were almost on the ridge and about to cross the burn which involved a bit of rock hopping. It wouldn't present much of a barrier to any fit outdoorsy type equine but I thought it might give me the pyschological edge. I hung back so Pete and Dan were out of sight then took up my position on a prominent rock at the crossing point and shouted in the nastiest scariest voice I could muster (wasn't a teacher all those years for nothing) and waved my pole threateningly at him.

I felt a brute doing it, especially when he stopped and looked bewilderedly at me. But I had to maximise my advantage so kept on hollering like a banshee and brandishing my pole and I could just see the poor chap thinking "Good grief, get me out of here" as sadly he turned and started his long plod back to the farm.

The rest of the walk north towards the summit was problem free on a broad grassy ridge with the occasional boulder. As we followed the edge of the cliffs on our left we saw an eagle soaring just below us but I didn't have camera out in time. The summit cairn felt impressively airy with great but hazy views of the Kyle of Tongue, Ben Loyal and out to the Pentland Firth and Orkney Islands.

Summit cairn of most northerly Munro 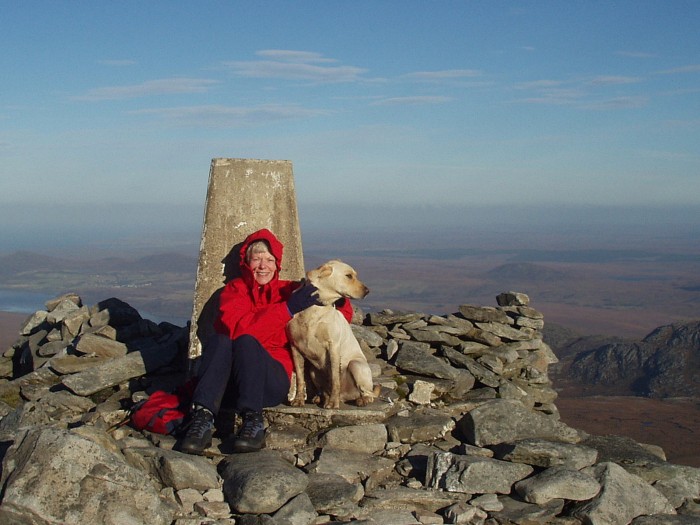 Our descent route was west down through a break in the cliffs following a steepish path by a burn that joins a burn from the Dubh-loch na Beinne. At the point we reached the road there was a sign indicating the way to Ben Hope so this is evidently the more frequented route, which if we'd taken we wouldn't have met HHH (hopeful hungry horse). We had a couple of km to walk back to the car and in the gloaming became aware of a large stag with an impressive head of antlers walking along the road just ahead and upwind of us. I had Dan on the lead and stood still not wanting to give the big fella a fright. But sixth sense told him he had company and he suddenly wheeled round and careered off the road before stopping and eyeing us warily. We just stayed still until he decided we were no immediate threat and trotted off, his head held high. What majestic creatures they are.

The icing on the cake to this fabulous day was seeing a badger running along the side of the road as we drove back to our cottage near Tongue.

Ben Hope with a sprinkling of snow from Kyle of Tongue 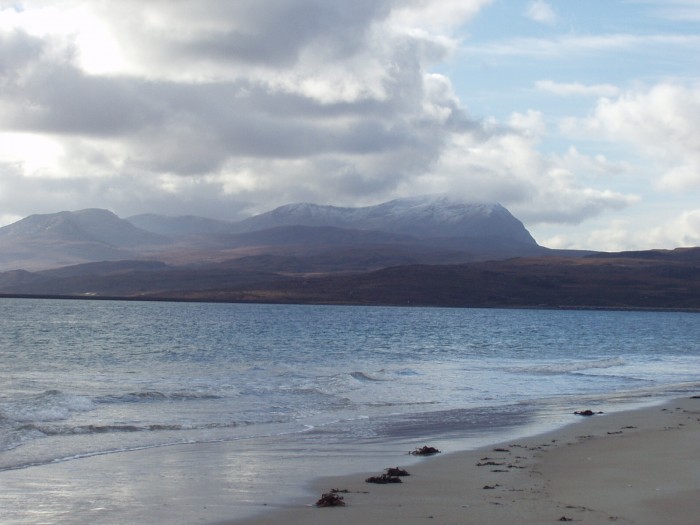 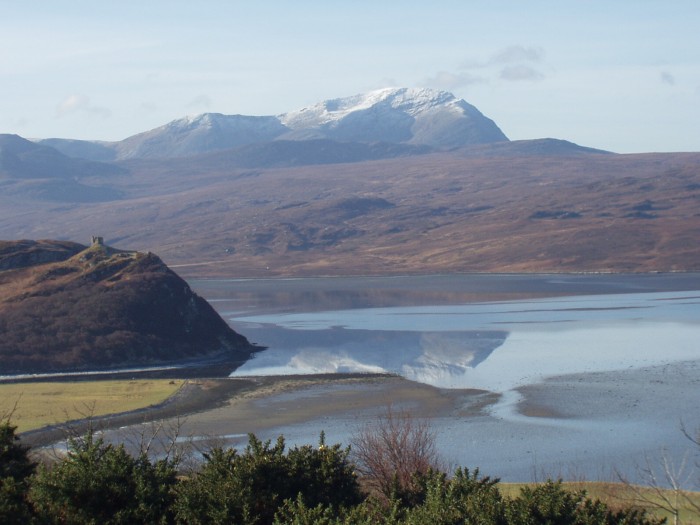 Three days later we headed off to Ben Loyal - not ever intending to climb to the top but just for a relaxed wander on the lower slopes to give the dog a walk. 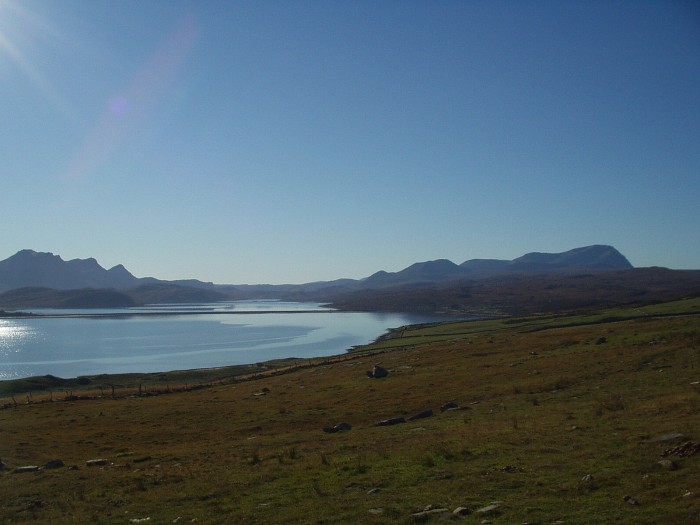 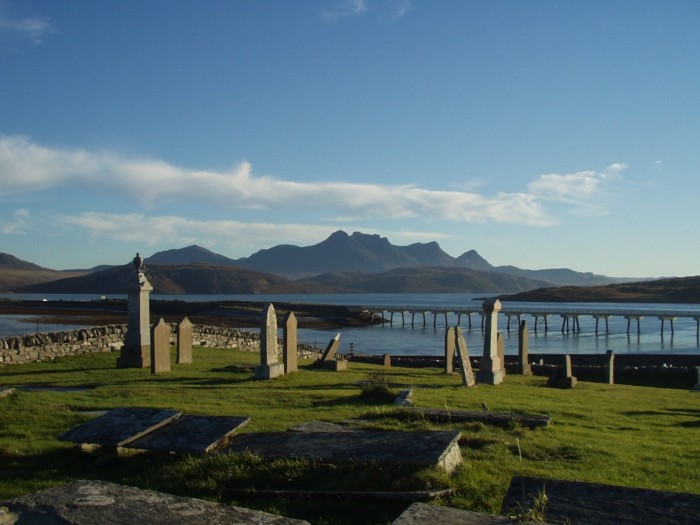 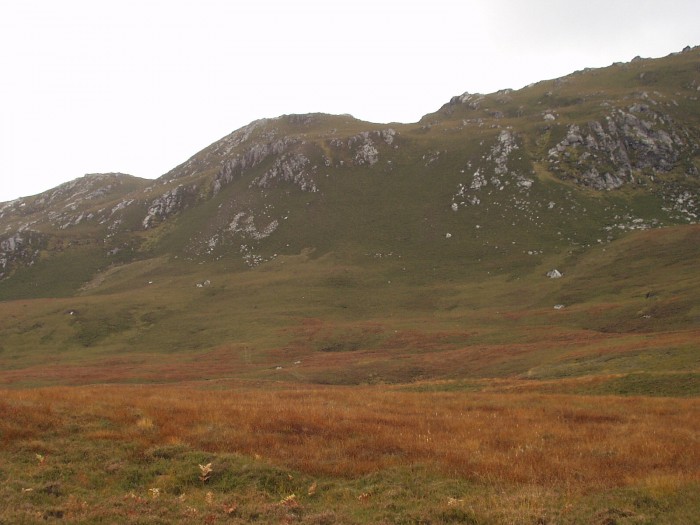 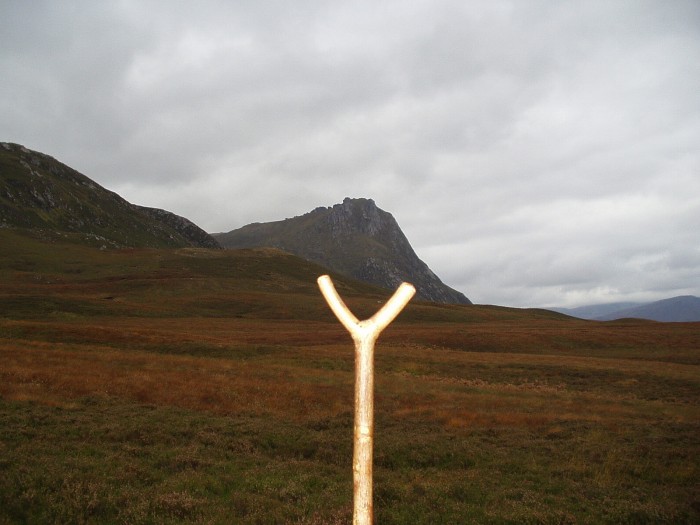 Hill sheep being gathered in for winter 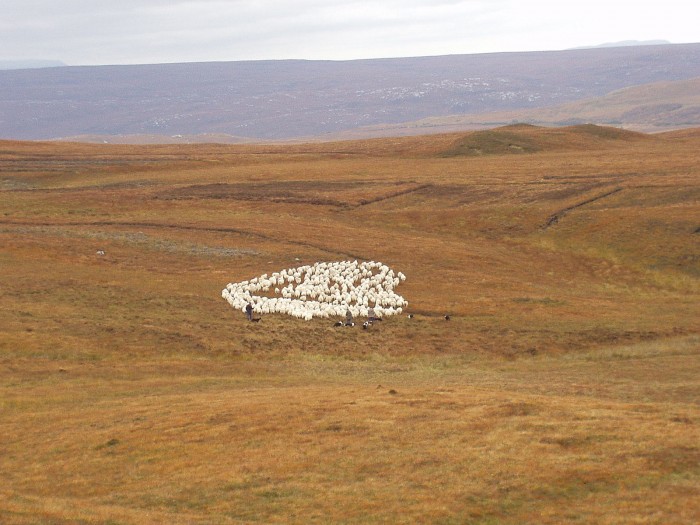 Ben Loyal from Kyle of Tongue Ben Loyal from a loch I've forgotten the name of where gold to help the Jacobites is meant to have been dumped! Around the Kyle of Tongue is a stunning part of the land - one we've returned to again and again.

What a great story! Just love the bit about the horse following you up the hill and trying to get into your husband's rucksack

I have always loved horses but sadly dont go riding any more, never quite lost my fear of them. When you're in the saddle you are very high off the ground

Such a better day than we had

Stalking ponies often seem a bit bored on days off - been followed a short way by a few but not so far.

morag1 wrote:What a great story! Just love the bit about the horse following you up the hill and trying to get into your husband's rucksack

Thanks Morag. He came so far with us I got quite attached to him and didn't like having to scare him off like that!

kinley wrote:Stalking ponies often seem a bit bored on days off - been followed a short way by a few but not so far.

He was lovely and very placid, if a bit determined to get his nose inside Pete's rucksack!

Of course he probably was a stalking pony and that's why he was unfazed by the terrain. What workaholics they must be to get bored on their days off... Owners should at least provide them with a TV in the barn!

Great report and a lovely set of pictures

Having done Ben Hope the previous year, now I have my eyes set on Ben Loyal - such an interesting shape of this hill.
The far north of Scotland is a beautiful area, I think a wee bit underestimated...

BlackPanther wrote:The far north of Scotland is a beautiful area, I think a wee bit underestimated...

Thanks BP and I couldn't agree more. But in a way that's part of the attraction - the far north isn't heaving with folk and you get stunning beaches all to yourself.

I'm happy to keep it that way. I've heard of having a monkey on your back but not a horse!!!!

pollyh33 wrote:Splendid photographs but I must say that the heart-shaped sheep is my favourite

Another idyllic spot in far north.... but not saying exactly where. I had to laugh so much about that horse! Thats brilliant I woudl have loved to see how far it would have followed you...would have been an easy ride down I guess

Great pictures of Ben Loyal....did that one in August this year but didnt managed to see the top due to clag....lovely report!

Haven't been on Ben Loyal, but it is a rather imposing monument in profile