After my complete whiteout on Schiehallion on Sunday I decided on Sunday night that I was going to make the most of my Monday off work and hit the hills again. MWIS was saying there was an over 90% chance of cloud free munros so with the last bit of energy I had in my body I went about chosing the hills I would hit the next morning. Once I decided on Cruach Ardrain & Beinn Tulaichean I noticed that Inverlochlarig was the recommended starting point and not the lay by on the A82 that I had been expecting. To add to the confusion my SMC munro book described the two hills as being linked when coming from the Tulaichen side but didnt say Tulaichen could be done when heading from the Ardrain side, how can they not be linked in the other direction I thought? Anyway my tiredness was probably the deciding factor in the starting point as I decided I couuldnt be bothered driving to Inverlochrig in the morning and that I would tackle both hills from the lay by on the A82.

The next morning I left the house at 6am and was parked and on my way for 7am. I headed up the familiar path along the route of the River Falloch before veering left down towards a rickety bridge across the river which coincides with the edge of the forrest on the left. From here it was a big squelch all the way up the hill towards Grey Height. It didnt stop being really boggy underfoot until I was almost at Meall Dhamh. The views up until now had been great with a lovely sunrise and clear hills all around but for some reason I wasnt enjoying it. The hill was steeper than expected and I felt like I wanted to quit and turn around and go home. Im not really sure what was wrong with me, perhaps I was still fatigued from the day before, but I continued on anyway trying to motivate myself by saying things like "well ive came this far I may as well see it out" etc.

The final section before reaching the fork in the path was an absolute killer. I was really struggling but got a bit of a second wind when the summit came in to view across the way to my left. I continued across and took some pics and admired the views. It took me 2 Hrs 45 mins to this point. The wind was really strong up there and the clouds were starting to dance around the hills all around. Beinn Tulaichen had a cap of cloud over it and the cloud on Ardrain was coming and going pretty quickly by now.

After a quick bite to eat and more photos I started heading across towards Beinn Tulaichen. The way it was described in the book made it sound like a short jaunt between the two but it took me the best part of 45 mins and again I was feeling knackered. After yet more photos it was time to head back. This was the worst bit of the day as I had to pretty much retrace the route I had just made. Down the valley back up Ardrain, Down Ardrain back up Meall Dhamh, down Meall Dhamh back up Grey Height and then eventually back down the boggy hill, across the bridge and down the path to the car. The walk back took me 2 Hrs.

What should have been a really enjoyable hill ended up feeling like a bit of a slog but at least the views were good, hope you enjoy the pics 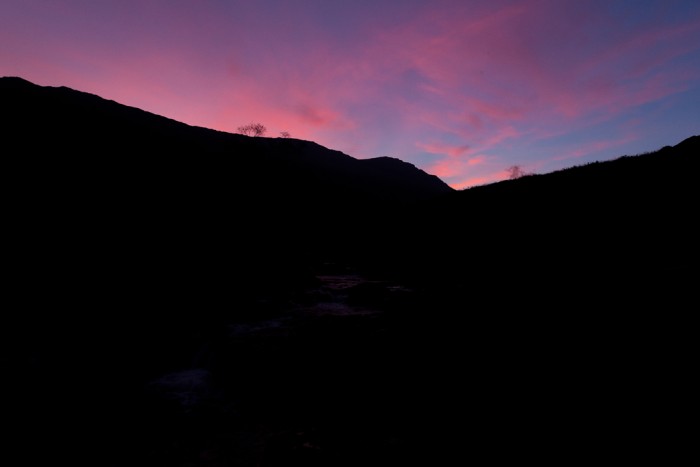 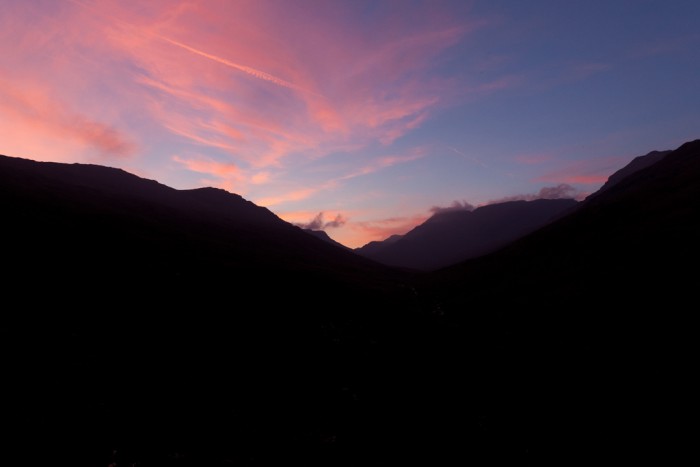 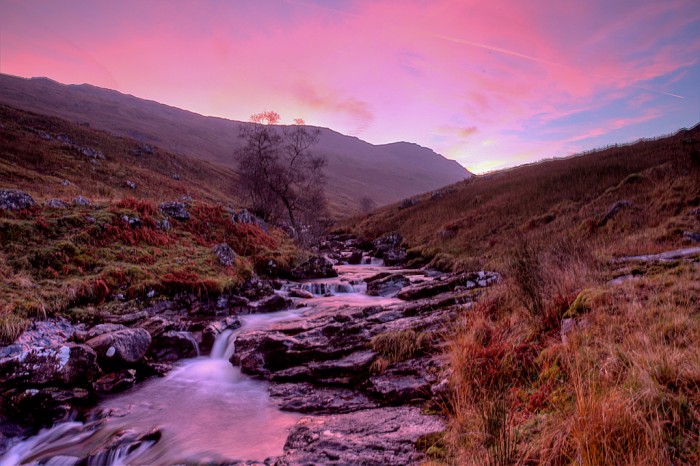 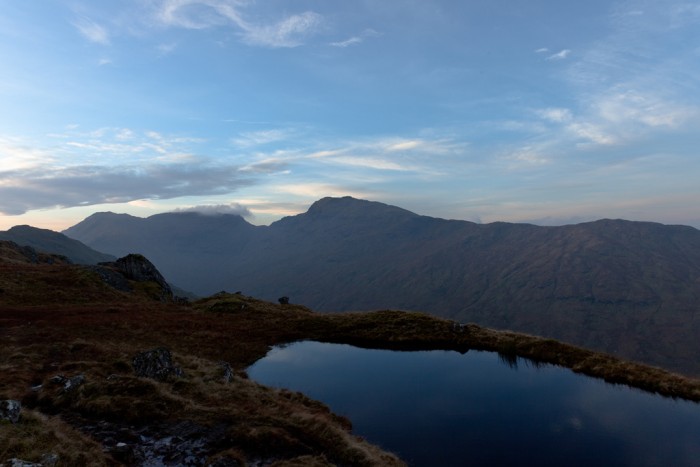 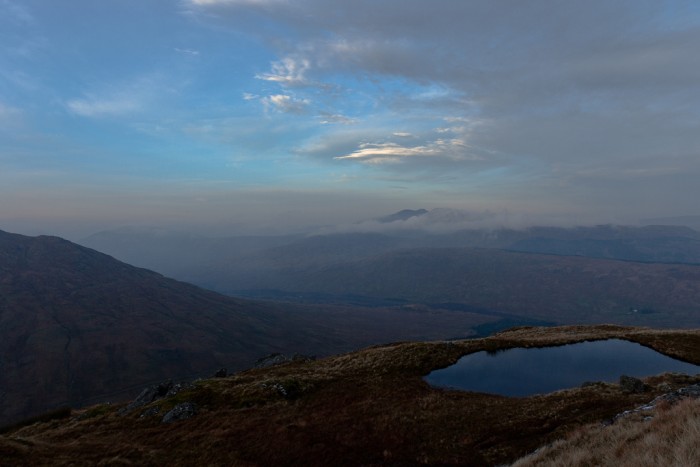 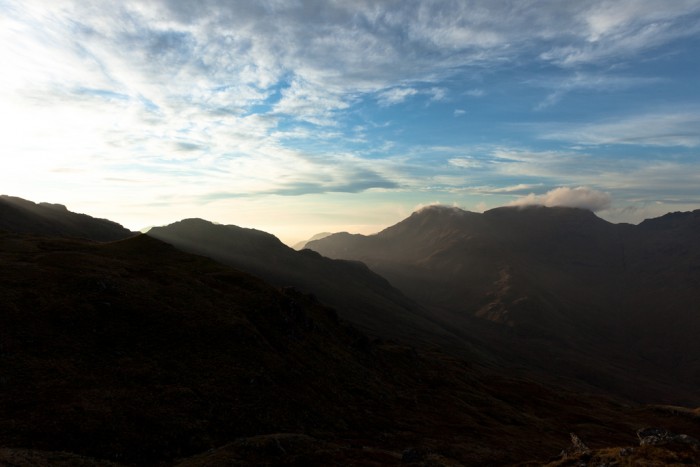 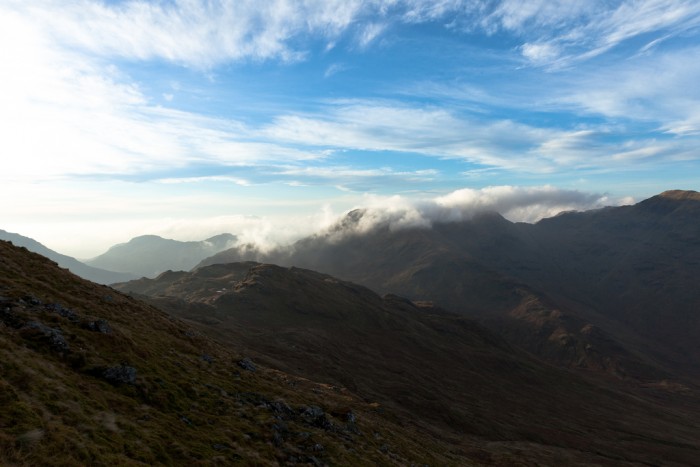 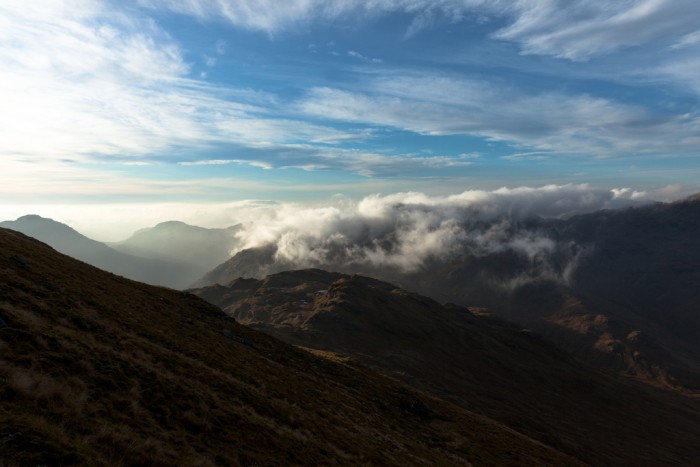 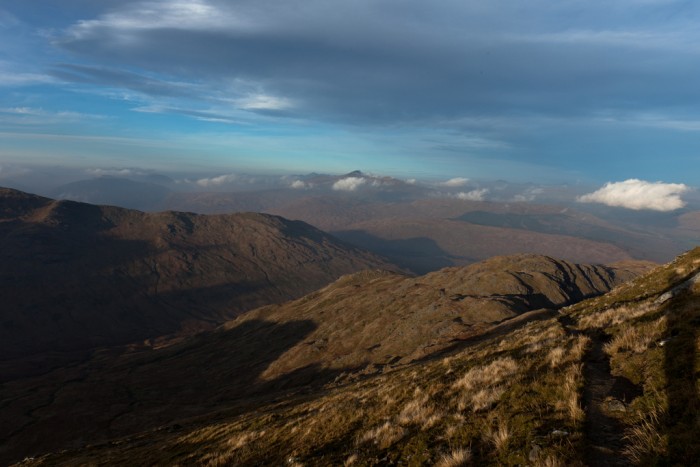 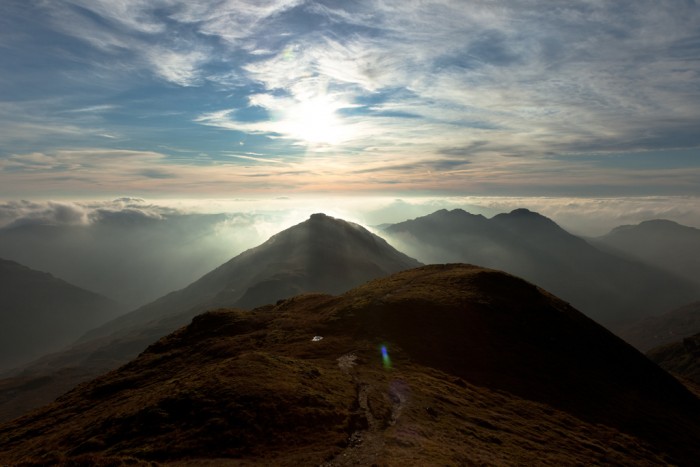 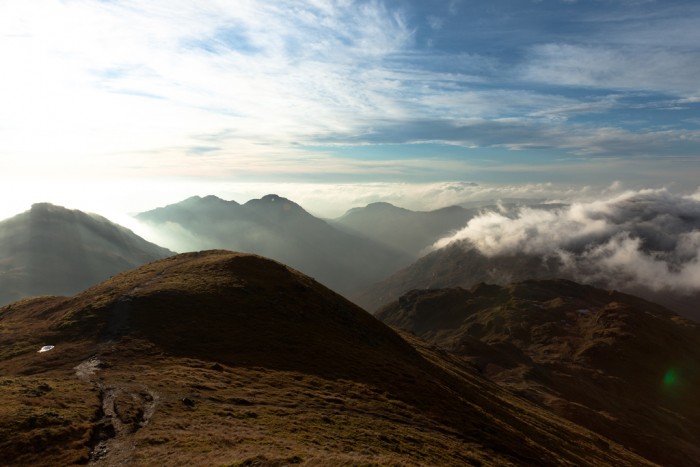 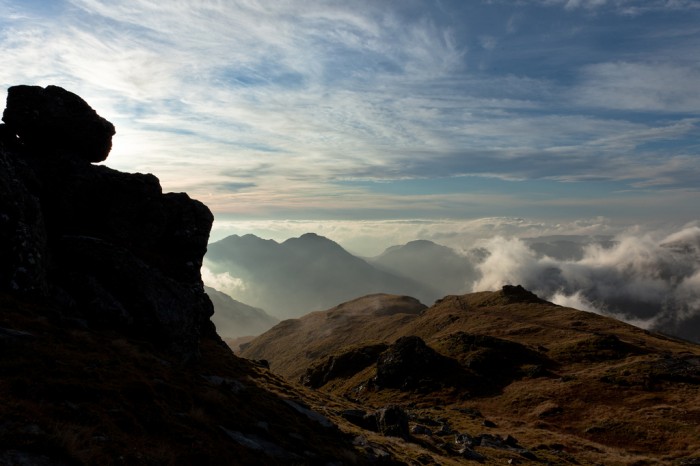 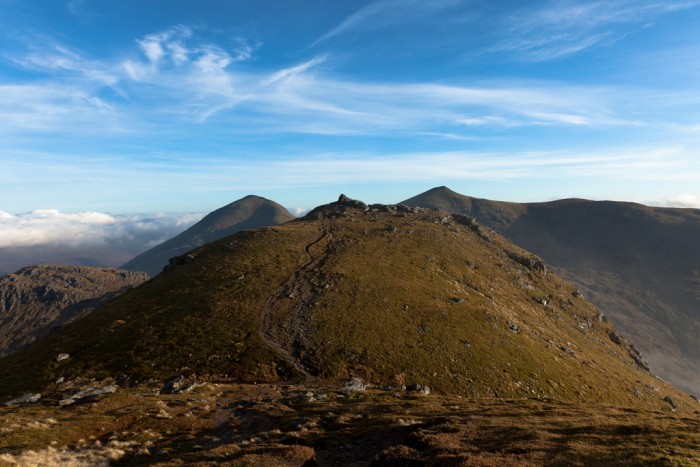 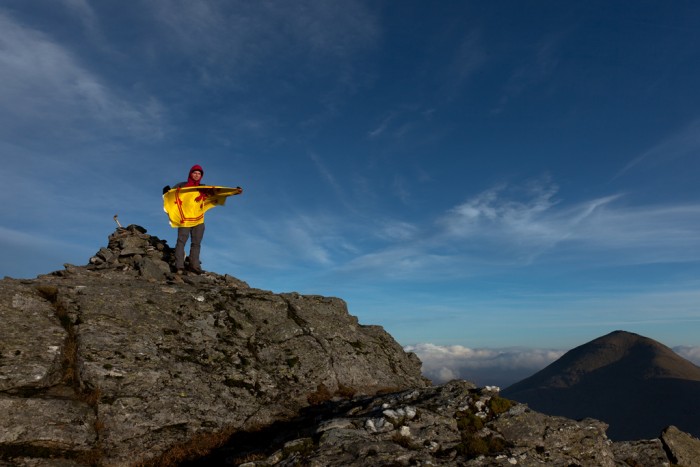 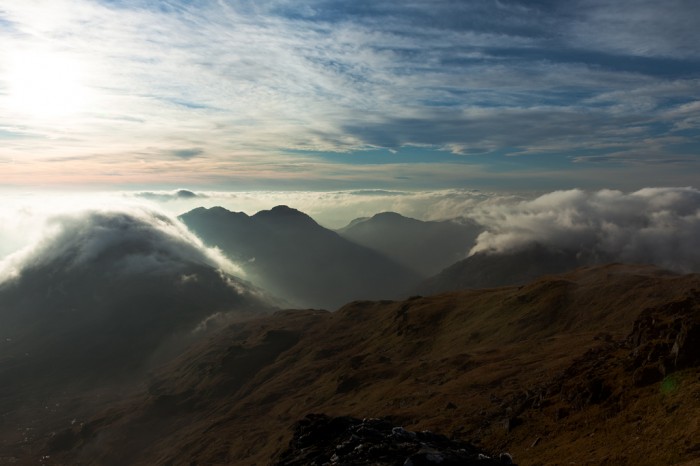 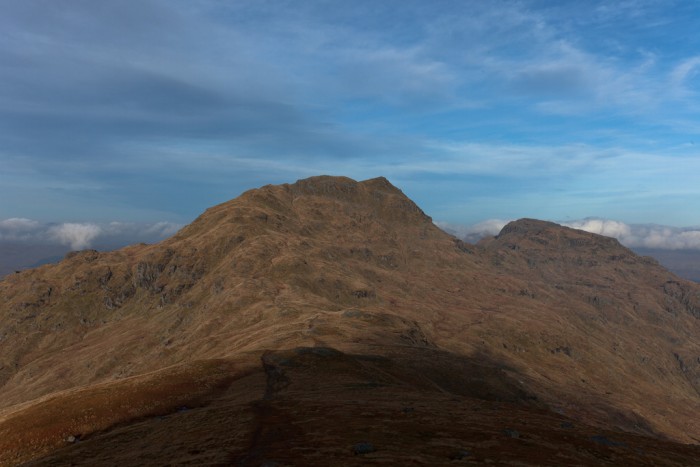 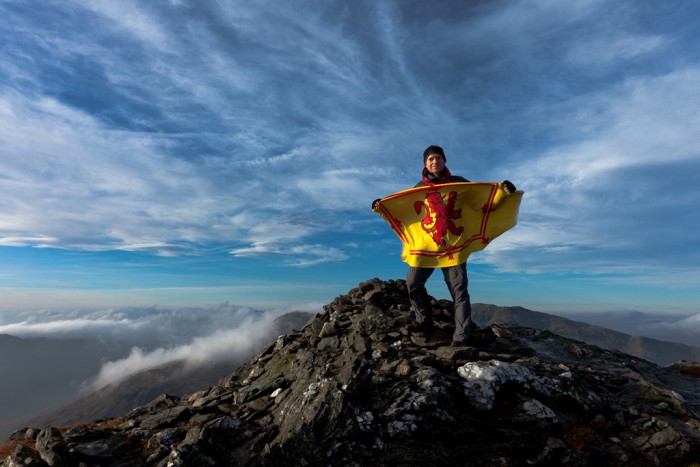 _M_G_ 4876 is a cracking picture. Good effort from you to keep going after the day before.

Thanks mate. That one and 4881 were my two favourites

Great pictures specially the early morning ones! Like the idea with the flag

Started that habit years ago and find it hard to stop now. That flags been everywhere with me.