Son, Daniel, and I had managed the early rise and the run up from Cowdenbeath had gone well. We had an fairly early start on our walk, leaving the car park at Victoria Bridge at 8:45am. It was already good daylight as we headed up the track beside the Abhainn Shira. Early morning on the Abhainn Shira

Our first landmark was the Green Hut at Clashgour. It was time to head north towards the hills. The waterfall to our left, on the flanks of Stob Ghabhar was to be out final descent route later in the day. We left the Allt Toaig behind and made our way up the stalkers path on Stob a'Choire Odhair. The zigzags made the going easier and we started to gain height in a serious way! 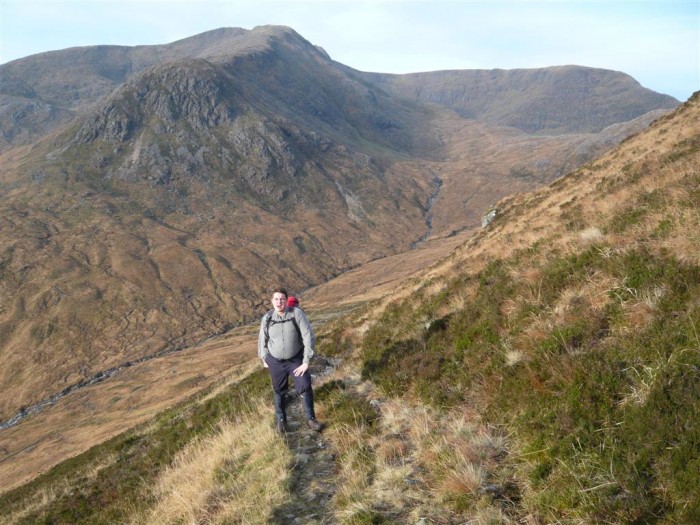 On the zigzag path.

Soon the view was opening up to the mountains to the east of us. There was some rocky ground to cover. But with a final push we were at the summit. There were great views from here. We were looking down on the great expanse of Rannoch Moor - and we couldn't help noticing the faint wisps of cloud starting to form way below us! The mountains of Glencoe and the great bulk of Clach Leathad stood out to the west. We spent a little while at the summit, taking photos and admiring the view. Then we began our descent westwards towards the great elephantine bulk of Stob Ghabhar. In a matter of minutes whispy trails had formed into more serious clouds and we began to wonder if we were going to loose the great visibility we had enjoyed until now. So we pressed on down - hoping the weather would hold and beginning to think about having a bite to eat! And we did find a great lunch spot in the bealach - out of the wind and in the sun! It took quite a bit of effort to get going again! But we had a hill to climb and we headed towards the steep path up onto the Aonach Eagach ridge. Heading for the ridge

The dark green lochan hid from the sun in the corrie below. We weren't quite sure what to expect as we'd read this was a steep and awkward ascent. It was steep and it was rocky. Climbing to the ridge

But we both actually rather enjoyed it, and within half an hour we had gained some 300 metres in altitude and were standing on the misty crest of the Aonach Eagach Ridge. Now what would this ridge have to offer? What was the narrow section going to be like? Would we see anything in the mist that surrounded us? The last question was answered first as the cloud parted and the ridge was instantly clear!

A short walk took us to the notch and the narrow section ahead. It didn't look too bad, but yes, it was quite exposed! Nothing like the Aonach Eagach Ridge of Glencoe though! Along the Aonach Eagach Ridge

There were some jagged bits - but there was always a good way through. We made our way along the ridge, enjoying all the ups and downs! Once we were over the narrow part it was a short walk to the summit of Stob Ghabhar. By now the hill fog was rolling in and there were only occasional glimpses of blue sky. The summit of Stob Ghabhar

There were brief breaks in the circling clouds to mountains in the distance. Mountains through the clouds

We had enjoyed a break for some food in the wind shelter just below the summit - and we had waited for a little while to see if the cloud would break. But now it was time to descend as it was getting later in the day. The clouds ripped through the gap below us as we descended from the summit. Clouds in the gap

And so we descended the south-east ridge of Stob Ghabhar (Stob Maol) down towards the Abhainn Shira with the mountains beyond Loch Tulla shrouded in cloud. Towards the Abhainn Shira

We paused to admire the waterfall, crossing over below the first fall. The path down the north side of the falls was eroded and steep and involved scrambling down some very wet rocks. Eventually we were able to look back at the falls in the evening light. The falls from below

We arrived back at the track in then glen with still a little light to see by. There were deer calmly grazing beside the track in the gathering gloom. We arrived back at the car at 4:50pm having had a great day on the hills. It had taken us just over 8 hours - but we had had stops totalling about 50 minutes! The climb up onto the Aonach Eagach Ridge and the stroll along the top had been the highlights of the day - along with the Summits of the two Munros, of course!

Thanks Bod, it was your report that got me interested in these two hills!

I enjoyed your report and some good photos; particularly liked the reflection in the lochan. Glad the weather held for you which it didn't the last time my husband tried Stob Ghabhar last October

Thank you so much the photos and highly descriptive narrative

That's another two hills that I will manage hopefully, please keep in mind- hopefully!!!

SusieThePensioner wrote:I enjoyed your report and some good photos; particularly liked the reflection in the lochan. Glad the weather held for you which it didn't the last time my husband tried Stob Ghabhar last October

Thanks Susie, That looked a cold dark lochan! Better luck to your husband next time.

pollyh33 wrote:That's another two hills that I will manage hopefully, please keep in mind- hopefully!!!

Thanks! They'd be no problem for you, Pollyh, I'm sure.

Just try to get a good day - it's definitely worth it for the views! Having said that, good days are sometimes hard to come by!

it's great to see what they actually look like, it wasnt very pleasant when we went up that way. superb pictures

Isn't it great when you get the weather, the hills, the views, the atmospheric cloud and the clouds all on the same trip - enjoyed your report - was up these hills not that long ago and really enjoyed that day as well - cheers

Ah, I love these two - Stob Ghabhar especially. Had a few false starts on that one, but when I got there it was well worth it. A nice layer of snow on the AE ridge when i did finally manage to do it Stob Ghabhar AE ridge with a sprinkle of snow

Even with that little bit of cloud. At least it didn't take away from the great views you get on these two.

Thanks mrssanta - I hope you get some clear days soon too!

You are right, Rockhopper, it's great when you get the good weather!

These are two fine hills with some nicely challenging (but not too extreme) scrambles and exposure - which I enjoyed most!

Thanks for sharing the picture of the AE ridge in the snow, Pete. It will be like that again soon, I imagine!