This was our first Munro in Glencoe and although we have done a lot of flat loch walks we have only previously walked the tourist Munros of Cairn Gorm (which we did on honeymoon) and more recently Ben Nevis. We have stayed in and around Glencoe many times, captivated by the surroundings, and walked the two passes and parts of the West Highland Way, loving the solitude and tranquility of the less trodden routes. This has inspired us to take on the Munros to truely appreciate and get to know these surroundings.

We parked at the Lairig Eilde gateway car park situated off the A82 and made our way into the stunning glacial valley towards the ascent of Buachaille Etive Beag. The route is steady and the climb gives fantastic views back towards the Aonach Eagach ridge. The climb leads to the bealach at the foot of Stob Coire Raineach where we enjoyed great views of the peak, which is the munro at the nothern end of the ridge overlooking the A82 but the lowest of the two peaks on the little Buachaille. Although it is only a short climb to the summit from here we decided to push on along the ridge towards Stob Dubh, knowing that we would return later along the same route and could therefore take on Stob Coire Raineach then. Despite the great weather (ensuring the waterproofs stayed in the sac) we encountered some snow on the route up and looking across to Bidean nam Bian could see more than just a scattering. 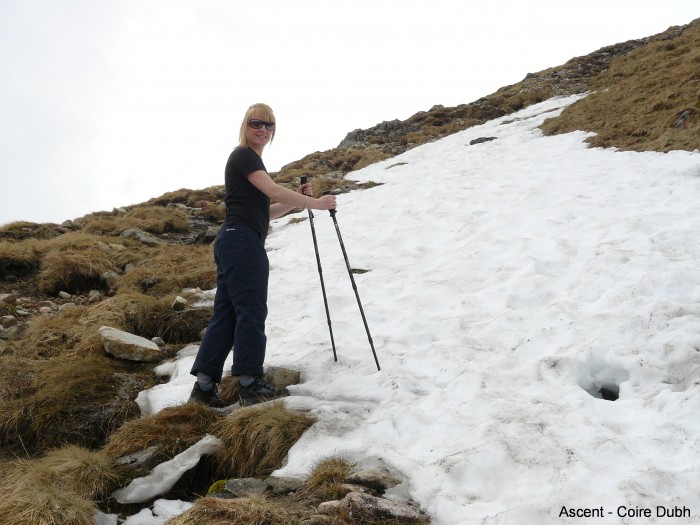 Looking back down the valley gave great views of the Glacial shaped Lairig Gartain and the summit of Stob Dearg, the highest peak on the nearby Buachaille Etive Mor (which would be a later conquest). The walk from here is relatively easy and short to the summit of Stob Dubh, where we had a break for refreshments and to take a few photos:

Summit looking back along the ridge towards Stob Coire Raineach Views across to the neighbouring massif, Bidean nam Bian with it's numerous peaks (from left to right) Stob Coire Sgreamhach, Bidean, and Stob Coire nan Lochan. 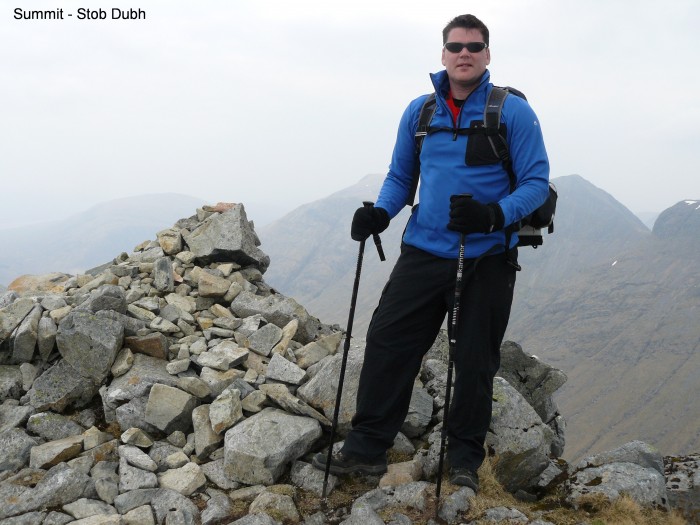 Summit views along Larig Eilde beneath Beinn Fhada and & Lairig Gartain at the foot of, and running alongside Buachaille Etive Mor. After the short break it was time to make our way back along the ridge for the final ascent of the day: Stob Coire Raineach. Another view of the Glacial Lairig Gartain looking towards Stob na Broige and Glen Etive. Upon reaching the ridge we made the short but rocky climb to the summit of Stob Coire Raineach, when upon our arrival, the sun came out through the haze to light up the impressive bulk of Stob Dearg. We spent a while on the summit knowing that the majority of the walk was completed with only the relatively short descent and walk back to the car left to tackle. The views were breathtaking, along the glen and pass, across to Bidean and on the otherside of the ridge, Buachaille Etive Mor. Following the break we made our way back down into Lairig Eilde. 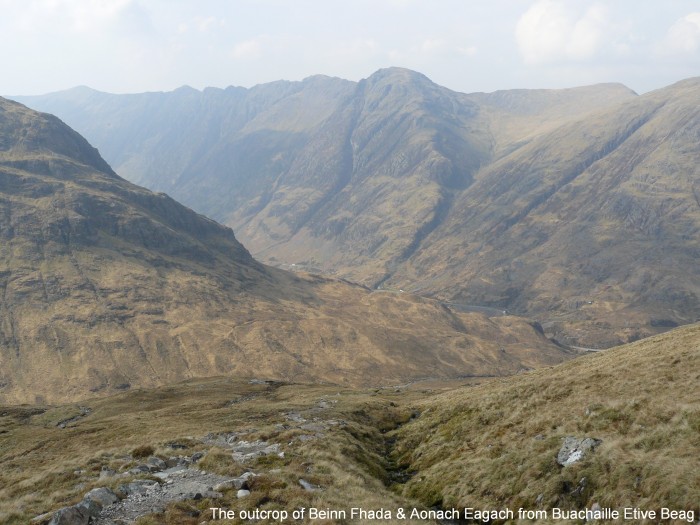 We arrived back at the car and drove the short journey back to Ballachulish, but not before calling at The Clachaig for a well deserved pint of 'Red Cuillin' - fantastic!! Nice report, and bringing back memories of my first Glencoe walk too.
Definitely a well deserved pint.

Thanks for these lovely pictures, I can show my husband that it doesnt look too dangerous to take a 12yr old up!