After our previous day’s exertion’s (see previous post), I wasn’t feeling so keen on going straight into a big expedition with heavy packs, especially as the weather was still looking dodgy and we had no forecast.

I therefore changed the plan again. Today (Wednesday 25th May) we’d just bag Beinn na Lap from Corrour. This would be an easy day to recover, and Andy could do some fishing too. It would still give us the opportunity to visit Corrour and Loch Ossian by train, and we could do our overnighter to Ben Alder tomorrow by the Southern route, when maybe the weather would have improved.

We had plenty of time, so we had a leisurely breakfast in the Moor of Rannoch Hotel and caught the later train from Rannoch Station. The train timetable seemed to be back to normal after yesterday’s problems. 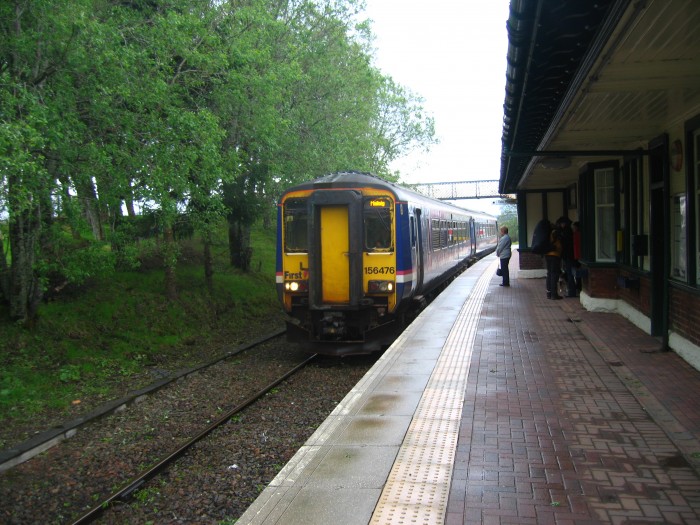 I’d been looking forward to visiting Corrour, famed as being the only station in the country not accessible by public road. Naively, perhaps, I’d envisaged this meant there would be no cars there. So I was a bit surprised to see a VW Polo parked by the station, which turned out to be ferrying people the short walk from the station café to the Youth Hostel, and later a white Transit van, which looked like it was making deliveries to the Lodge at the far end of the Loch. I wondered how these vehicles got here – were they delivered by train? 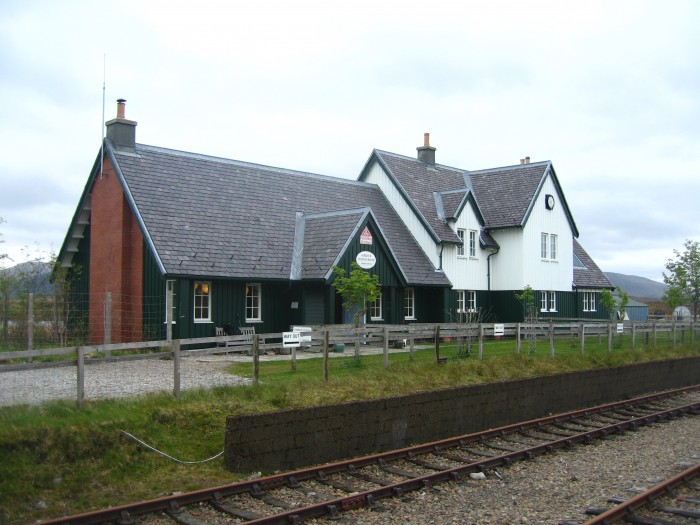 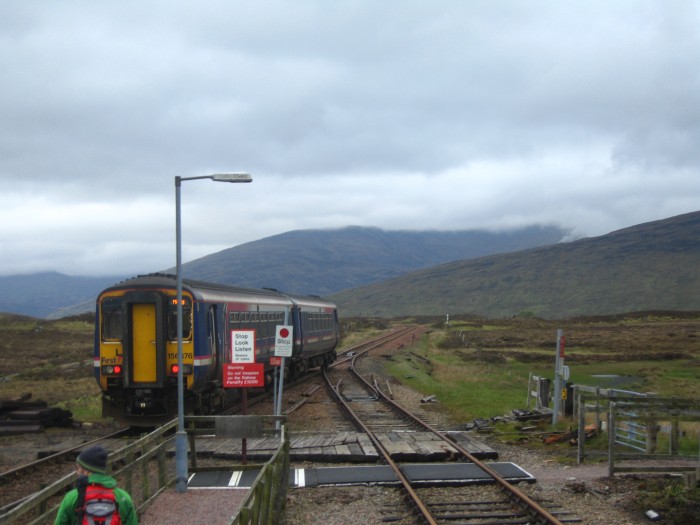 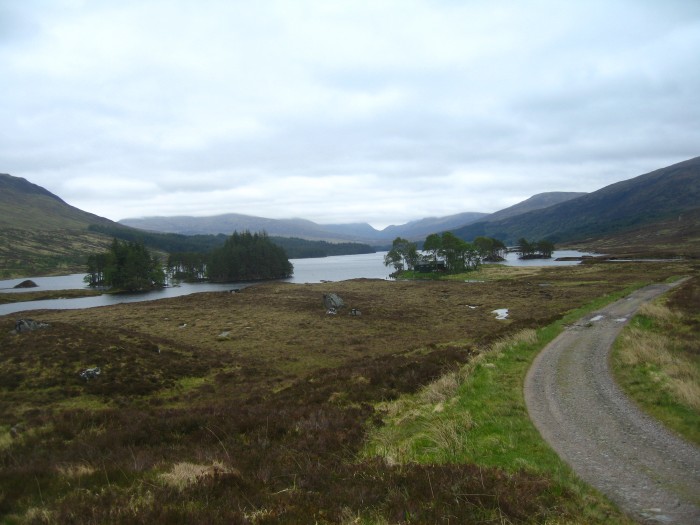 We walked down the track towards the Loch and turned off towards the foot of Beinn na Lap. Here we met an old guy with a fishing rod, who said he’d been with a party going up Beinn na Lap but had turned back as it was too windy for him. Apparently they were going over the far side of the hill to fish, but he was now just going to fish in some of the lochans here. He gave Andy some tips as to the best places.

Undeterred, we set off up the hill. It didn’t seem quite as windy as we’d experienced yesterday on the other side of the Loch (mind you, that still left plenty of scope for it to be pretty windy!). This was a straightforward bag from a high start point – up the initial slope into the clag, pick up the path and follow it along the wide ridge until you reach the summit cairn and trig. We got buffeted at points but were able to find some shelter en route. 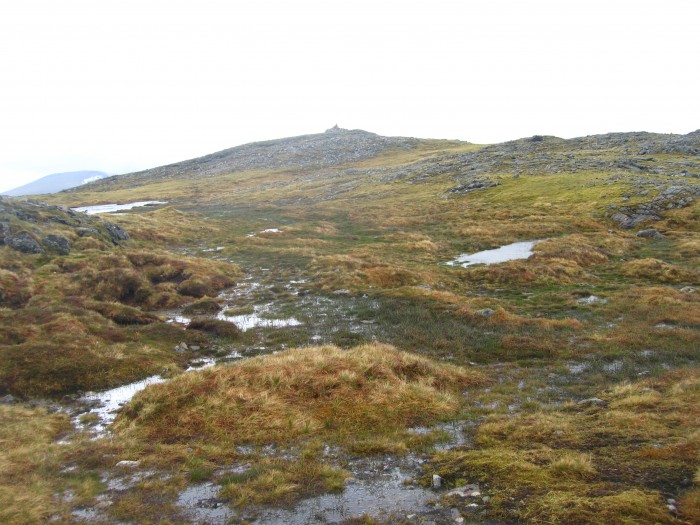 There were even some views from the summit – Ben Alder looking elusive again. 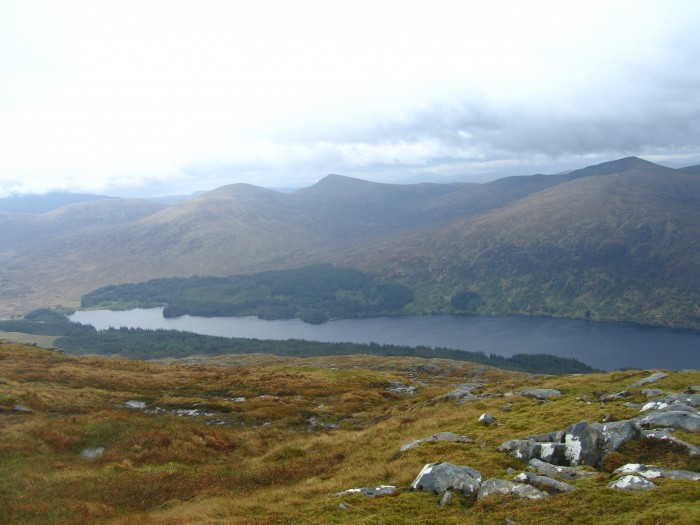 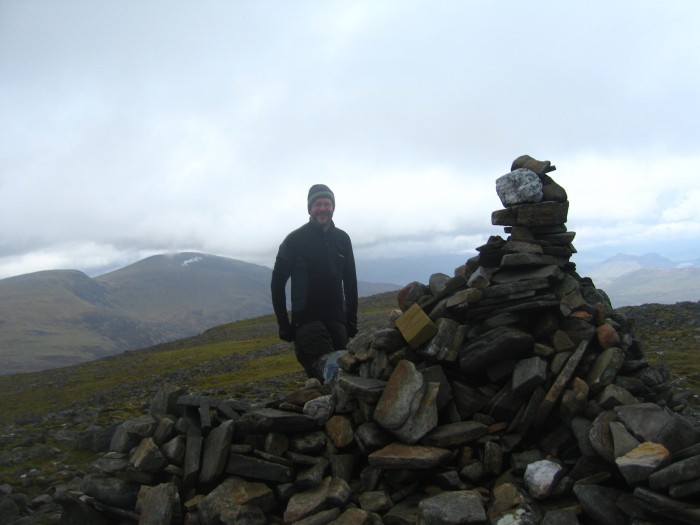 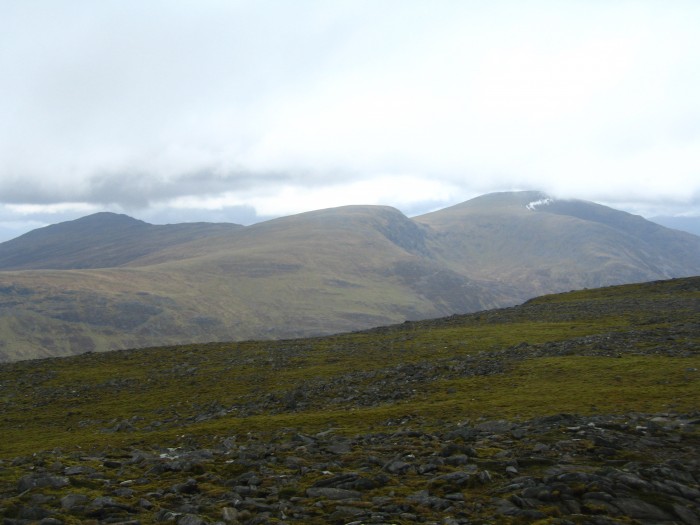 We returned the way we came. Back at the junction we met the same fisherman, now with his wife. Her party had become split in the mist at the summit and they were still trying to meet up.

Andy and I walked round the West end of the Loch and picked up the other end of the Road to the Isles track we’d walked on yesterday. 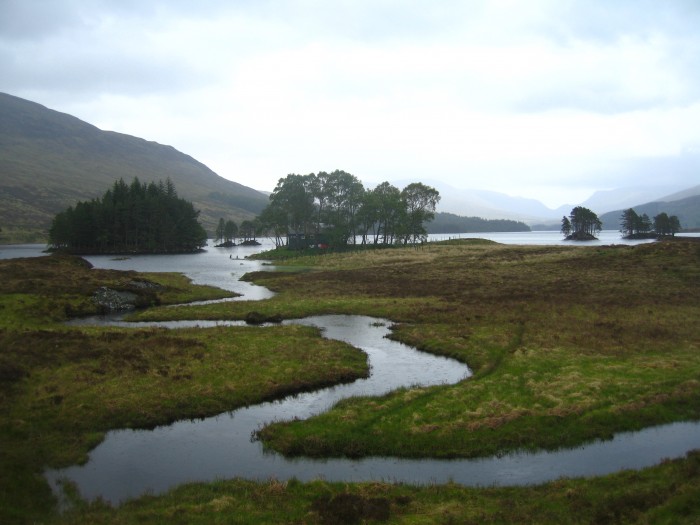 I noted the beginning of the Munro-baggers’ path up Carn Dearg from this side. I watched Andy set up his fishing gear by the lochan whilst I nibbled on a Fruesli bar, then headed back to the station café, where I had a coffee and flapjack and played Carcassonne on my iPhone whilst waiting for the train and Andy’s return. 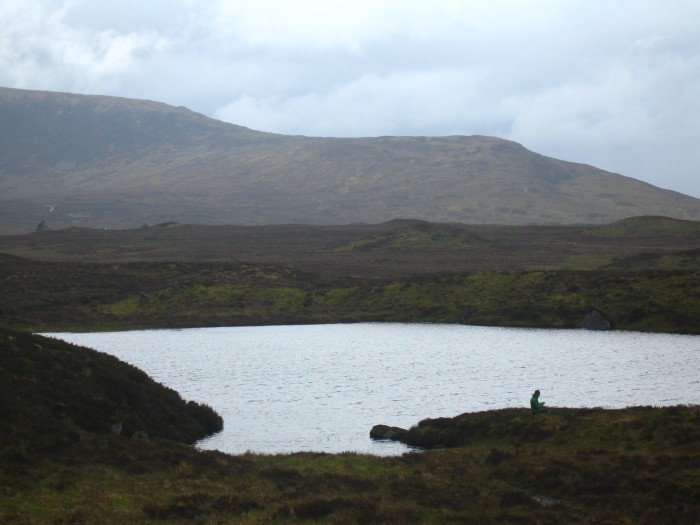 Eventually the time to catch the train approached and there was still no sign of Andy. Having finished my coffee and games, I thought I’d wander back down the track to find him. Halfway back to the junction, another car approached – this time a red Golf with a London registration. For somewhere unreachable by public road, there was an awful lot of traffic here.

I was even more surprised when the car stopped, and Andy opened the door to offer me a lift back to the station! It turned out the driver and his family were friends of the head ghillie (I think that’s the term) at the Lodge, where they were staying. You could drive in (if permitted) from Glen Spean to the North. Study of the map later confirmed this must be from the start point for the Creag Pitridh group and the Northern approach to the Aonach Beag group.

Despite all the traffic, there was still a feeling of remoteness to Loch Ossian. I could understand why the fisherman and the family in the car came regularly to spend a few days here. It must be beautiful in good weather. 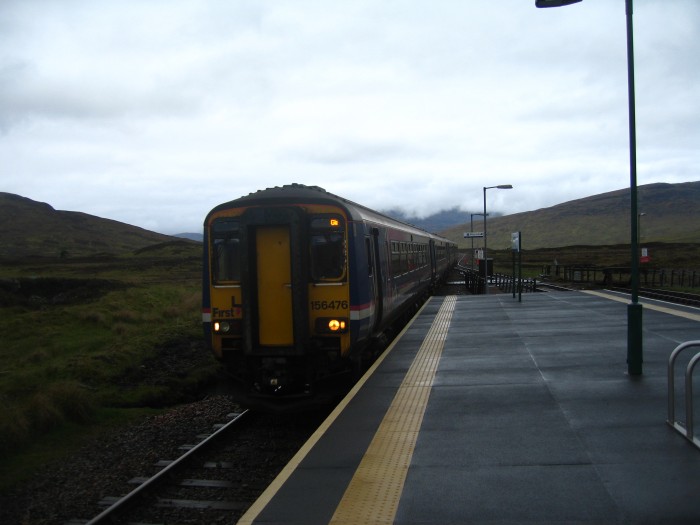 We caught the train back to Rannoch and stayed another night at the hotel. We had failed to bag Ben Alder for a third time, but we’d had another good day on the hill despite the weather and had bagged one more of our target Munros. Tomorrow we’d have another go…