The shortest Scottish hillwalk ever? Hill of Dunnideer

The shortest Scottish hillwalk ever? Hill of Dunnideer


This is probably the shortest hill walk I have ever done since moving here 4 years ago (well, I have walked up smaller hills, but not just for the sake of hillwalking).... but it was worth the effort. After passing through a kissing gate we followed the direction of the helpful sign and headed up the well-manicured grassy path, looking back towards the historic village of Insch. The hill was fairly steep.... Within 10 minutes we reached the summit, on which the remnants of the Castle of Dunnideer stand. The castle dates from circa 1260, and is possibly the earliest tower-house on the Scottish mainland (http://canmore.rcahms.gov.uk/en/site/18128/details/dunnideer/).

After the walk I learned that the castle ruins are surrounded by two lines of defence from an earlier hillfort. The inner line includes a vitrified wall, where the stone have been turned glassy by a high temperature fire burning the wooden framework within the wall. There were also earth ramparts around these walls - another line of defence..... However, being not very observant I didn't recognise any of these archaeological remains, and just thought we were walking up a hill 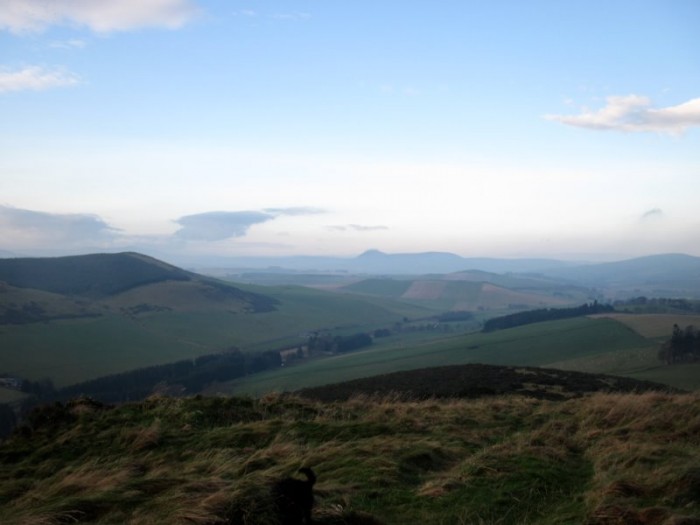 After spending some time on the summit, taking in the views and taking photographs of the ruins from numerous angles, we headed back down the way we came, passing the line of larch trees. The walk was finished almost as soon as it had began!


Track201111201000.gpx Open full screen  NB: Walkhighlands is not responsible for the accuracy of gpx files in users posts

To recover from such a strenuous walk

we then paid a visit to the new teashop at Chapel of Garioch - the Old Post Office - where I had a latte and a delicious raspberry & amaretto cake... delicious. Re: The shortest Scottish hillwalk ever? Hill of Dunnideer

I think Cairnpapple hill might beat this, i think it took me 10-15mins to get to the summit of that one