This is my second attempt at posting this up, the first one, which was a work of art honest,

was lost when my PC crashed in an extreme “aaaaargh” moment. So all you good folks will have to settle for a mediocre report instead.
I haven’t been out much lately although I did have a nice little walk up Beinn Dubh, sadly didn’t get to the top and a really enjoyable walk around Loch Leven (Kinross). So I was looking forward to Saturday and a little trip upto to Cruach Ardrain and Beinn Tulaichean. The MWIS forecast wasn’t the best but I tend to take that with a pinch of salt, also I was going to be setting off later than normal, about 11 am so a slightly strange feel to the drive up past Callander. The drive along the lochshore to Inverlochlarig is beautiful, but the road needs a bit of your attention, single track nearly all the way and its up and down all over the place. I arrived at the picnic site, with three cars already parked up, and on my way dead on 11am. The WH report mentions the signs directing you away from the farmyard, quite reasonable, but the carnage that awaited me in the field just after the bridge was something else. The whole width of the field is just muck and bog up past ankle height and beyond. Wasn’t sure if it was a initiation or right of passage, but was soon past it, and heading towards the glen. I took a line up the hill from the first gate across the landrover track and just more or less headed straight up. 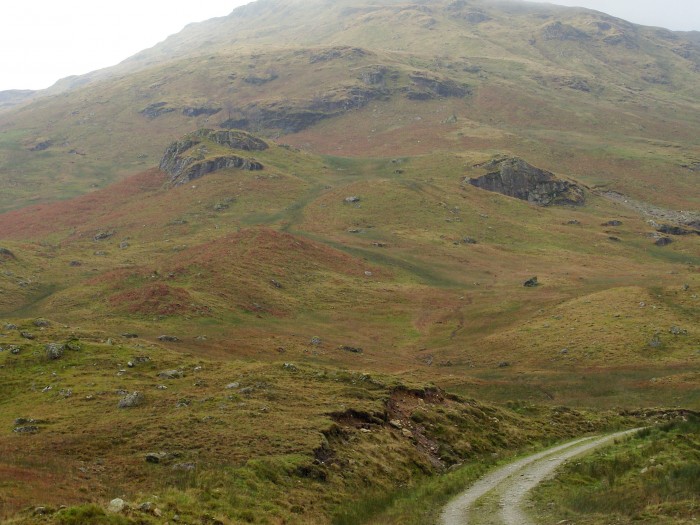 The forecast was for clag from about 650m onwards, but the winds never materialised, thankfully, so it was going to be a good day to practice my recently acquired navigation skills. At this point I also set myself some targets and so cut off points to bale out, I was acutely aware that it was later in the year and I had set off later than any of my other walks, so I knew I had to be off the hill and heading out by 1600 latest.
The plod up the hill is a total bogfest, and soon enough I had more weight on my boots than in my rucksac, and once into the cloud it was difficult to gauge progress, but I made the first of many false summits and discovered the newly named Lochan na Bog.

This was sapping my enthusiasm more than my strength at this stage but onward and upward, I soon made the path for the bealach and realised I had overshot the summit of Beinn Tulaichean. Back tracking I tried in vane to find the summit cairn if it exists, so hopefully the purists will cede that I made the summit.
A quick bite and a drink and I was heading down and across the bealach, noting a small cairn marking what I assumed to be the descent path.
All this time I had been using my compass and map and the visibility was limited, making it near impossible to see what the route for Cruach Ardrain had in store. I don’t recall the exact times now but I gave myself a target of making the top, and if not, just turning round and getting down, as I had no idea what the descent had in store for me.
The ascent was a little tougher than I would have liked, and it was still fairly boggy, then it firmed up before making the summit after passing a few cairns along the way. Got to admit at this stage I was wishing that the hills all had Trig Points on them.
I had made better time than expected so it was time for a quick sarnie, some Pea and Ham soup from a chicken and a (big) handful of Jelly Babies for dessert. By now the temperature had dropped a fair bit so it was time to head back and down, I’m glad I had been using my compass so much cos in the limited visibility it was nigh impossible to see any landmarks, and although the path is well defined it does fade in parts.
I soon made it back to the cairn I had seen early, and could clearly see sets of footprints heading down .
That route is steep in places and caution is needed, as it follows the course of a burn closely.
With the wet conditions underfoot it was a little “interesting” to say the least, and I can confirm that on more than one occasion a rolling, sliding 12stone(aka 15stone) man gathers no moss, most other crap but no moss.

I made the path at the side of Inverlochlarig burn and it was a case of head down, erse up and get back to my car.
And so I made it back to my car just as the lights went out, and was able to get changed without traumatising the local wildlife.
So a good trek, but zero views, and didn’t see a soul all day, and the conditions made photography a total waste of effort. Unfortunately I got a call and had to forego my intended pint at the Lade Inn, never mind I’m back up at Strathyre soon so I’m sure I’ll get my pint or two then.
I would be interested to know other peoples opinion……. Is this the boggiest hill ever, sure felt like it.
Take care out there

Not when i was up them Did you not try and Quo round it?

Would definately agree with quoman, my boggiest hill to date has been beinn Chabhair which i did last week and was caked in mud at the end!

And when i did these 2 in the blazing sun it was dry as a bone, and we were jumping in the burns to keep cool, shorts and boots our only attire!

Attacked from the same side as yourself, and remember the road well, being a scared to death passenger in my mates car!

Just shows how different every hill can be, depends what mood its in!

In my limited experience, I also found Beinn Chabhair to be the boggiest one yet

Did you not try and Quo round it?

Well done for bagging these two in the limited time you had and the poor visibility.
I came up from Glen Falloch and it wasn't too boggy, but that was in June... I'm still to encounter my bog nemesis, I'm sure it will come and find me.

think this is just a soggy big area ,the walk back in from Beinn a Chroin is the worst bog i've came across yet,no good likes

We did Cruach Adrain a couple of weeks ago on a fine day. Great views and a fine hill..it's a bit of a slog though at parts and I certainly felt it after not having done a munro for a wee while.

We took pretty much the same route as you and found ourselves struggling for daylight and returning via the ridge would not be on, so after finding the small cairn we decided to drop down into the valley and follow the burn back to the landrover track...to say it was boggy is an understatement!!,the bog seemed to go on for miles before we reached the safety of the landrover track...its a pure quagmire..really treacherous walking and I was on my arse more than a few times

..certainly up there as the worst ground I have walked on.

We got back to the car in total darkness,knackered and covered in mud...was probably too big a walk for the amount of light available...an interesting day though.

I nominate the return path from Beinn a Ghlo as the boggiest ever.

Whilst I'd hate to suggest that England beats Scotland at anything, in the boggiest summit category, for my money the Cheviot is the clear winner!

Get onto the Corbetts and Grahams....then you can discuss boggy with a bit of authority.

think this is just a soggy big area ,the walk back in from Beinn a Chroin is the worst bog i've came across yet,no good likes

I second that Pigeon

Although I must say its a close run thing with, er let me think, about 95% of my hills so far!!!

When I did these two in November 2010 didn't find them bad at all for bogginess.

For my money it's the walk in (and out) to Am Faochagaich - an unpredictable river crossing with large areas of pure swamp on either side!

Get onto the Corbetts and Grahams....then you can discuss boggy with a bit of authority

Looking at the map, Knockfin Heights in Caithness look like a potential winner. Has anyone been up there?