Ben Lui and Beinn a'Chleibh - return to the hills

Ben Lui and Beinn a'Chleibh - return to the hills


This was our first serious trip into the hills for years, since before having children, and the onset of midlife crisis and a sudden feeling that if we wanted to get up any more Munros we'd better get on with it, meant we had managed to arrange nearly a whole week with Grandparents in charge.
We walked in from Tyndrum the previous evening and camped at the foot of Ben Lui ready to get an early start in the morning. It's a very pleasant walk in from Tyndrum station through the forest then up Glen Cononish with Ben Lui at the head of the glen. Once we pitched our tent we enjoyed the sunset lighting up the shoulder of Ben Oss. lui(1).gpx Open full screen  NB: Walkhighlands is not responsible for the accuracy of gpx files in users posts
we were up and away bright and early in the morning, straight up the corrie, following the route described in the SMC munros book which was easy enough especially as we could see exactly where we were going. it was a frosty morning and there was still some snow left on the mountain, we were armed with our brand new crampons and my ancient ice axe, (I got it when I was in my teens, but fortunately at that time never had reason to use it seriously as I'd no idea how!) Husband was blessed with a lovely new axe half the weight of mine.
It got better and better as we climbed into the corrie, and we found a patch of snow big enough to justify bringing the crampons (although we could easily have walked round it!) 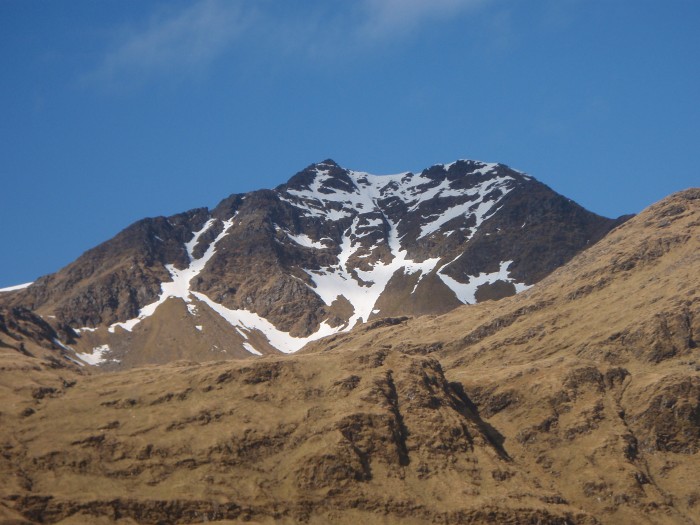 here's a wee plant high up in the coire gaothach And an inspiring view over to Dalmally with Cruachan behind. My Granny went up there so I can too. From there we walked down and up along the obvious path to Beinn a'Chleibh. the obvious disadvantage to our route choice then presented itself - to get home, the best way really was back up Ben Lui again. By this time I was beginning to realise that I was getting middle aged and/or unfit. Never mind, it was that or stay on the hill all night!
I don't really have any decent pics after that, but we did do it, coming down Ben Lui by the northern arm of the corrie. That was a very steep long descent, by the time I got to the bottom I wasn't sure if I'd ever walk again! Great report mrssanta and some good food for thought. Impressive effort camping up the glen and making two great days out of it! Thanks for the feedback on my Dubhchraig report and helping me look at the options for enjoying Ben Oss and Ben Lui ......

Fantastic, what a great place to pitch your tent! Ben Lui is my favourite hill. When I bagged it I was wondering about the ascent along the south shoulder. The path I was on decidedly went in that direction, but I didn't persue it because I hadn't researched it. Instead I went up your descent route. What is the ascent route like?
Well done for bagging these two and you had a nice day for it as well.

Well done mrssanta on getting back to the hills!

I still have Ben Lui on my "to do" list and would much prefer the approach from the Cononish Glen that you took - although I'm not geared up for winter camping! I'm wondering how long it would take to walk up from Dalrigh, climb Ben Lui and Beinn a Chleibh and return to Dalrigh. It might be a bit long for winter daylight hours. Any thoughts?

Thanks folks for your encouraging comments.
we don't go very fast and certainly wouldnt have been able to do that in winter daylight. and as far as I'm concerned the camping is part of the treat. I do like to be warm and comfy in the tent though, have a very warm sleeping bag and a downmat which are good for my sticky-out bones. the ascent route we took was as described in the smc guide book and was easy enough to follow, but of course the visibility was excellent. May is a great month for camping with long hours of daylight but no midges, as long as you can keep warm. It's also apparently the month with lowest rainfall. Down jacket is the best buy I have for camping, and it also makes a passable pillow! Since that trip we have invested in some more lightweight gear as well.
we wanted to do Ben Lui because it is such a beautiful mountain and you can see it from all over the place.