Two simple Mealls a day on the Grahams Diet!

Two simple Mealls a day on the Grahams Diet!


Having set foot on my first Graham summit (Ben Cleuch from Tillicoultry) last Saturday, I was now going for the hat-trick in consecutive weekends. The forecast seemed fair, so Lucy the Lab and I set off along the well known A85 towards Crieff heading for Amulree and the Grahams of Meall Reamhar and Meall nan Caorach. We decided to cut off just before Methven and take the scenic route through Harrietfield, bringing us out into the Sma Glen between Gilmerton and Newton Bridge. Despite having lived in Perth for the last 6 years and having been all around this area of Perthshire on various ventures, this was the first time I had been through the Sma Glen.

It was a beautiful Saturday early afternoon as I drove over Newton Bridge and on towards Amulree. I had hoped to get parked at the end of the road which turns off and heads towards the buildings shown on the OS Map at Girron, just short of Amulree. However, there didn't seem to be much scope for parking here so I continued on to Amulree itself and parked in the substantial carpark at the village hall on the Glen Quaich road. From here it was a 10 minute walk back along the main road to the track heading for Girron.

A few light drops of rain were falling as we headed over the rather new looking wooden bridge over the Girron Burn, but these came to nothing. 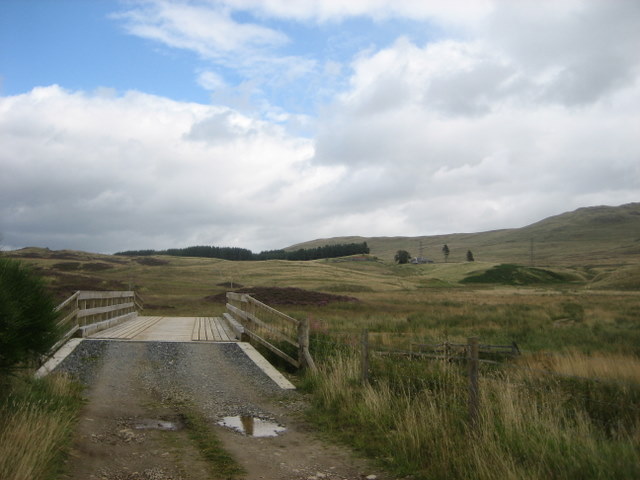 The track climbs slightly as it heads towards the buildings at Girron which turn out to be a little white cottage with a couple of ramshackle outbuildings dotted around. Just behind the cottage, the track takes a sharp left over an initially boggy section before bending round to the right, passing under the pylons and heading into open moorland. The two objectives of the day can now be clearly seen ahead on either side of the pass, with Meall Reamhar being most prominent on the right and the marginally higher Meall nan Caorach being a little more hidden and less defined on the left. 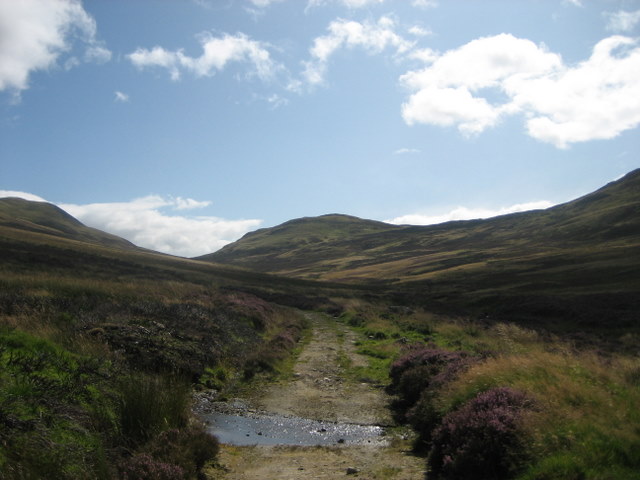 The view ahead to the two Mealls

After another kilometre or so, a metal gate is reached and a grassy landrover track heads off to the right. It looks like you could head down this track and up over the crags onto the ridge leading to Meall Reamhar. I decided at this stage to stay on the main track and tackle Meall nan Caorach first, then head over to Meall Reamhar and head back along the ridge and back out on the grassy landrover track. 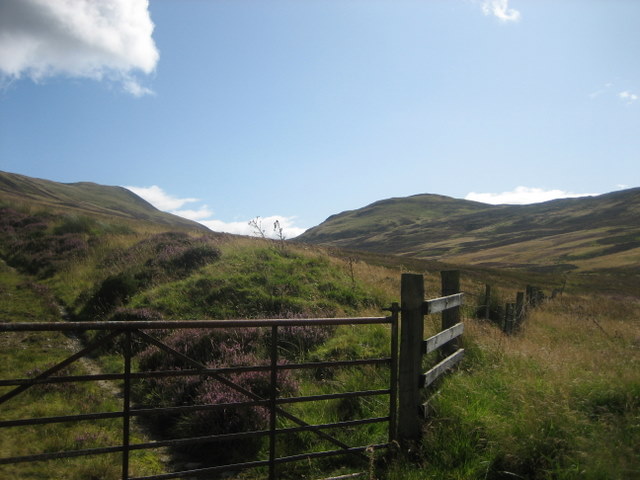 Just beyond the gate, the track bends to the left and begins to climb sharply before levelling off a bit as it begins to come between the two hills. I decided to leave the track at a broken down section of embankment and cut up the heathery hillside towards the summit of the higher of the two peaks. 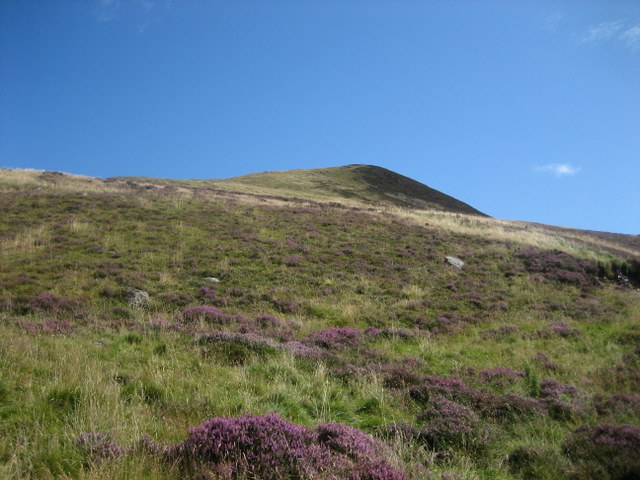 There is little evidence of any kind of a path here and the going is initially quite tricky through the heather, but eventually the heather gives way to grass, increasingly punctuated by the odd rock and small patch of light scree. There are now one or two sheep tracks which become wider and better defined as height is gained. Suddenly the views open up ahead over Strahearn and beyond into Fife, with the peaks of the Lomond Hills being (just about) visible. 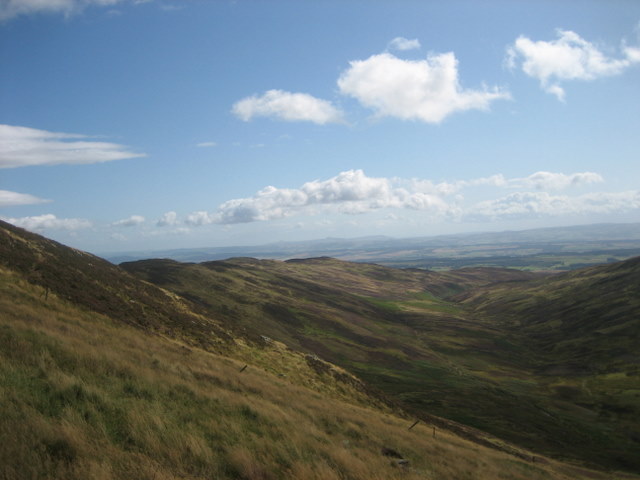 View to the Lomond Hills

The summit is soon reached by following the line of an old fence which has seen better days. It's about lunchtime now but a strong wind with a distinct hint of autumn in it is whipping around the trig point, so we take a few quick snaps and decide to head back down the line of the fence to have lunch back in the shelter of the glen between the two hills. 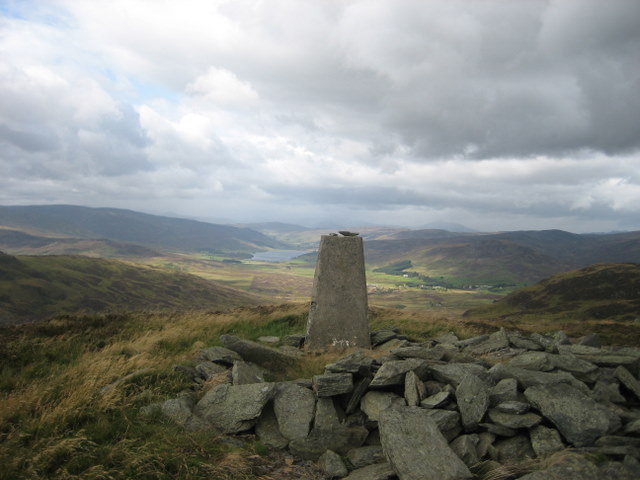 View northwest from summit of Meall nan Caorach to Amulree and Loch Freuchie. 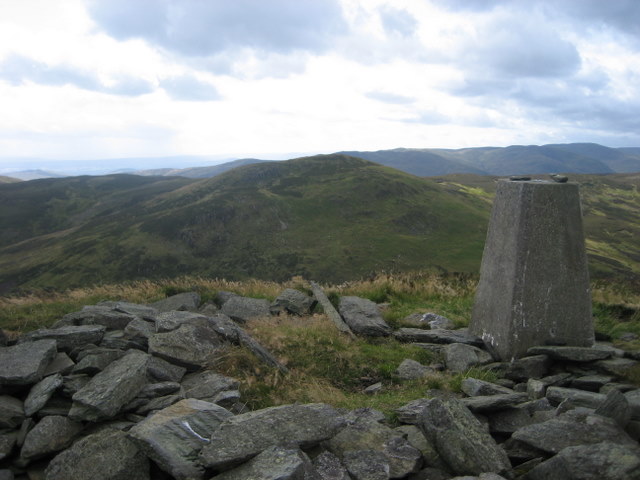 It's a straightforward descent back down the fence to the track for a leisurely lunch and a cup of tea before an equally straightforward ascent up the fence on the other side of the track onto the summit of Meall Reamhar, the lower of these two hills by a few metres. I have to resort to donning hat and gloves on the acent of Reanhar as the wind is getting up and there is a real bite to it - autumn is announcing it's imminent arrival. 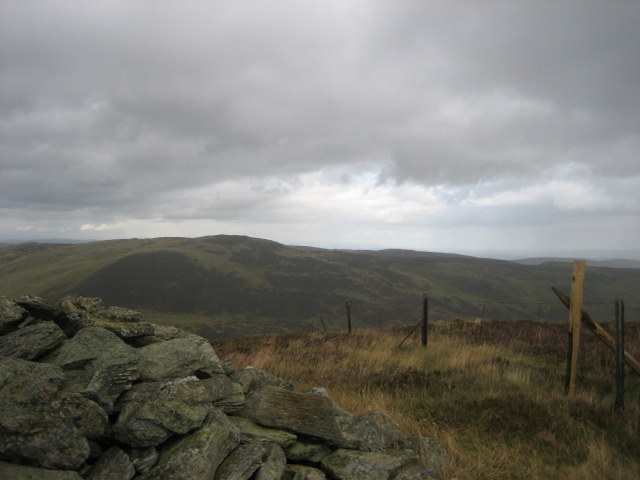 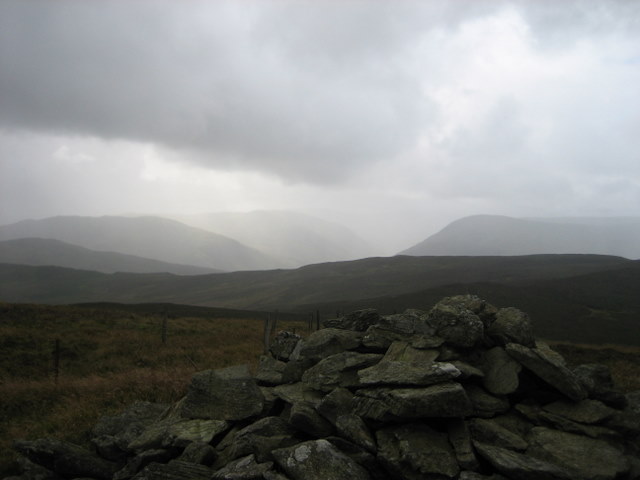 Looking southwest from Meall Reamhar into the Sma Glen

From here we continue nothwest along the ridge towards the little crags at the far end and the weather soon brightens up again, giving good views back to the two summits behind. 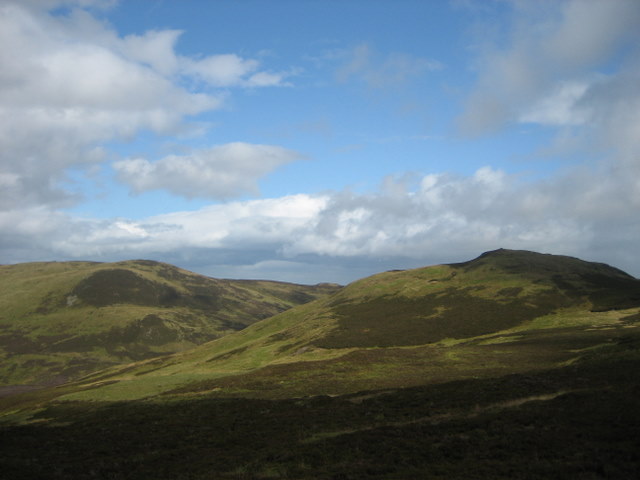 Back to the summits.

The ground here is a little softer than on previous sections and becomes increasingly studded with peat hags and tiny little lochans. This is Lucy's kind of terrain - the wetter and muddier the better! 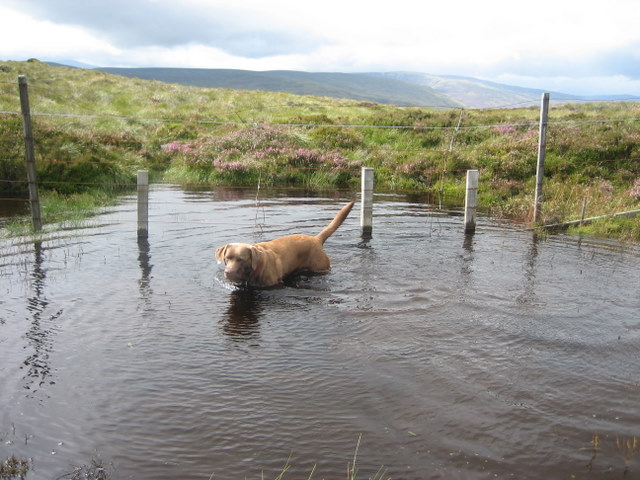 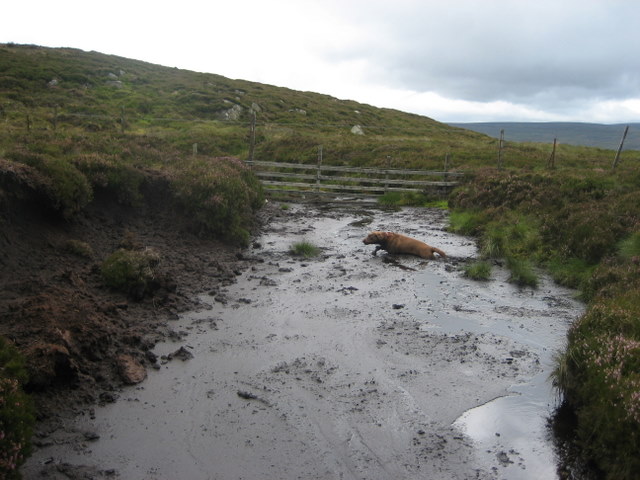 ...... follwed by a peat bog bath. Must look out the garden hose when we get home! 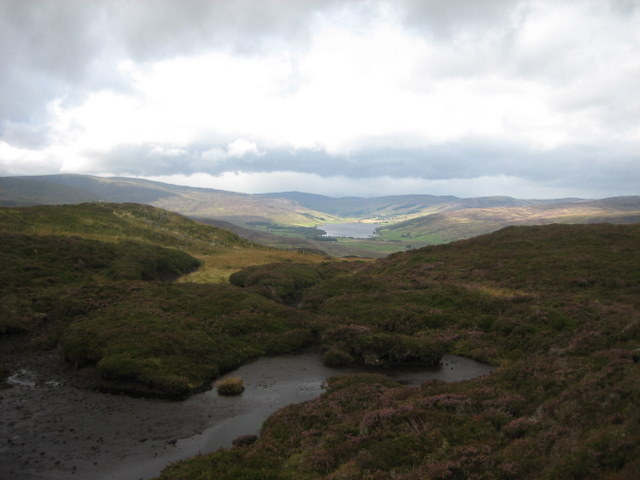 View down to Loch Freuchie

From more or less the end of the ridge, we cut down over the crags and down towards the stream and the track. The last few hundred metres of flat ground before the stream are quite boggy in places. We headed for the metal gate from earlier on, expecting to pick up the grassy landrover track, and soon enough, it begins to form. The stream is easily crossed by way of a little wodden bridge which looks a little weather beaten and rickety but actually feels quite solid underfoot. 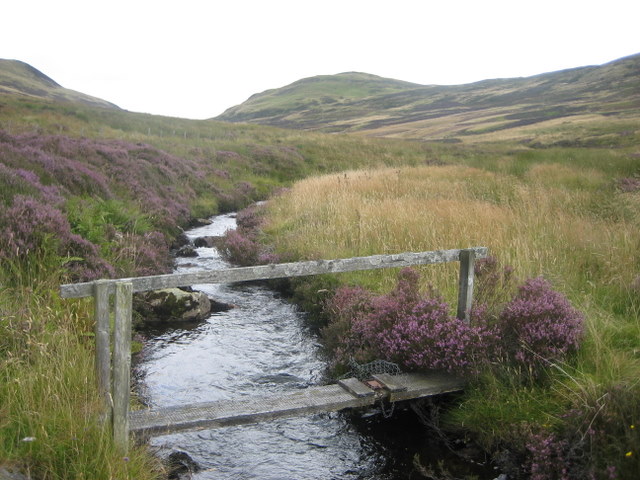 Forth Road Bridge it ain't!

From here it's a simple walk back along the track past the cottage to the main road - stopping only briefly to throw Lucy in the stream to try and remove the worst of the peat bog aftermath!

Good one - you found some sunshine as well!!

Looks like a lovely walk, and right on the doorstep - I too have lived in the vicinity of Perth all my life and have failed to venture up the Sma Glen, guess it won't be long now though before I find an excuse: the munros are getting further away!

Nice to see these looking green and tame, I did them last winter in knee deep snow in awful conditions, and ripped my trousers on the barbed wire fence. Do mind those traps though, you can see one on the bridge.