If my Granny can do it, so can I

If my Granny can do it, so can I


This was the last day of our week long camping and walking expedition and we weren't sure whether we had it in us to climb another mountain. the weather had taken a turn for the worse and we had been exhausted the night before, but after a night in the most comfortable bed in the world at the Crianlarich Hotel, and a lazy breakfast, we did feel a lot better.
We'd had several plans for what to do, and our intention was to have a nice easy day and go to the Visitor Centre under Cruachan, which I'm told is fascinating. But as we drove into Dalmally the sun came out and lit up the side of the Dalmally Horseshoe, and we were smitten! we couldnt resist going up.
Family legend has it that my Granny once climbed Cruachan when she was at school in Fort William in the twenties. She was a country lass from Ardnamurchan, but not a hillwalker by any means, and I have difficulty picturing her up there, probably wearing Sensible Shoes and a tweed skirt! So if she could do it, so could we!!
We took the usual route, setting off around noon, but up the left hand of the burn instead of the right. why? because that's the path we found! this was a steep climb up above Loch Awe initially through birch woods with the burn tumbling sometimes out of sight but never unheard. Beautiful.
First view of Cruachan dam, which is certainly impressive, although not very pretty. 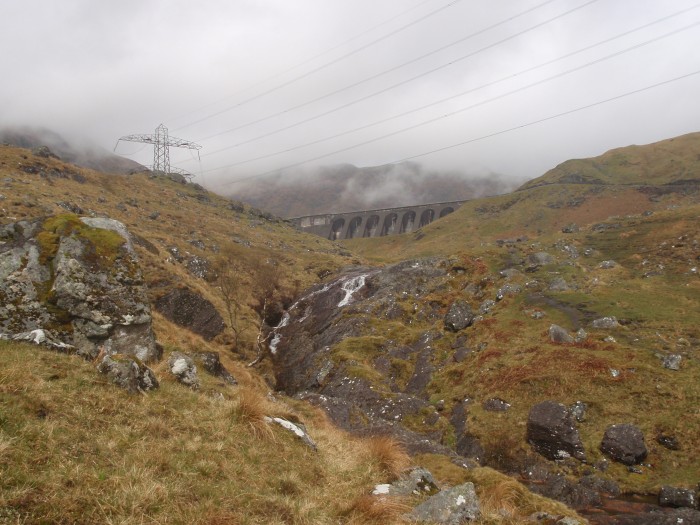 Up along the left hand (west) bank of the loch, which was a welcome respite from steep climbing. then a left turn up the steep slope to the bealach between Meall Cuanail and Cruachan itself. 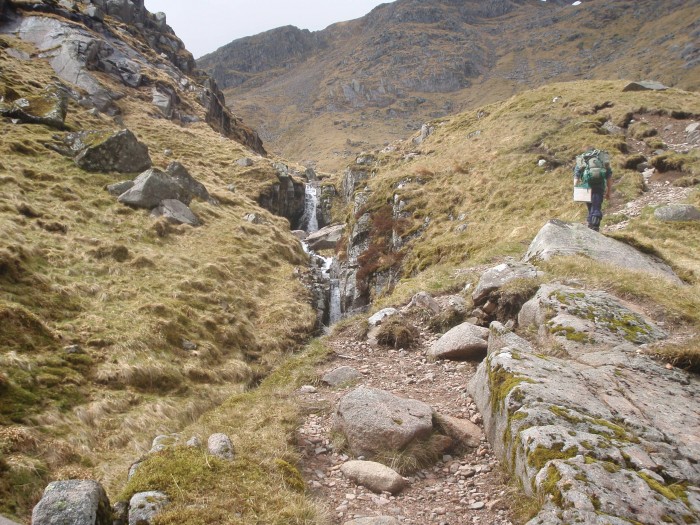 We stopped at the bealach for a wee bite of lunch before the final assault on the summit.
The summit cone itself was in cloud and was very rocky. It did feel like a long way up, but at last we were there, about 4 hours after setting off. So not much of a stop there and we set off along the ridge where there was wet snow. And an excellent rainbow, small but perfectly formed. Views back to the summit and forward to Stob Damh were now available to us. 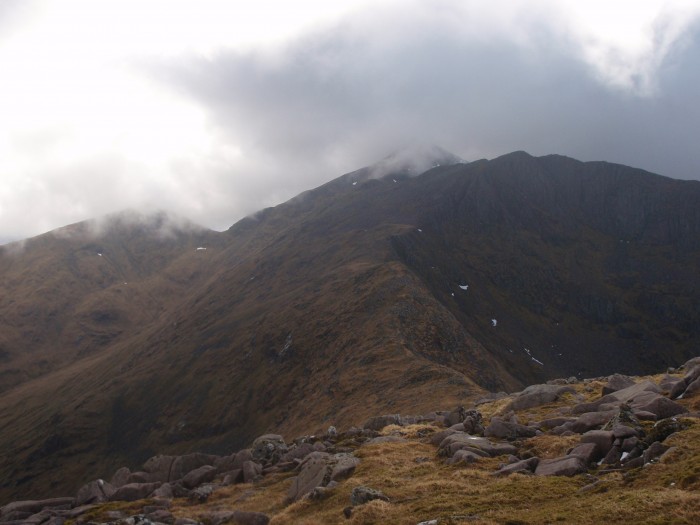 We reached the top of Stob Damh about six o'clock and kept going around the ridge and down the path to join the lochside again, by which time the sun was disappearing behind the horizon on the west side of the horseshoe. Retracing our steps down to Loch Awe station from the dam, we were very pleased with our change of plan and had thoroughly enjoyed our return to the hills.
So that will be my last report for a while, until I get the chance to be out on them hills again. Hmm, where will it be?

Your granny sounds quite a girl, so was mine

Love the "sun and burn" pic

Thanks Morag. I still can't picture her up Cruachan. My outdoor pictures of Granny involve beaches and folding chairs mostly, but family legend also has it she was a dab hand at calving. Although she really would have us all believe she was sophisticated and polished.

Cruachan is such a splendid mountain, and the loop makes a fantastic day out

Grannies ehh! Mine had a stand up fight with a male neighbour

Nobody picked on me as a child

thanks soulminer. We certainly thought it was a great walk. it's also a good hill to see from elsewhere and think "I've been up there!"