Share your personal walking route experiences in Scotland, and comment on other peoples' reports.
Warning Please note that hillwalking when there is snow lying requires an ice-axe, crampons and the knowledge, experience and skill to use them correctly. Summer routes may not be viable or appropriate in winter. See winter information on our skills and safety pages for more information.
Post a reply
57 posts • Page 1 of 4 • 1, 2, 3, 4


Having spent Saturday studying the weather forecast it was clear that with....

Cold: 0C, but will feel as cold as minus 16C directly in the wind.Wind: Severe upland gales, or across northern mountains storm force winds
Snow over 600m

It would be a wild day but on the other hand I quite like a good storm and I was keen to put me in more challenging positions than I have been in so far…after all you learn from experience!

Checking my Munro book I didn’t fancy driving too far, so I decided on Ben Ime and Ben Narnain…I didn’t do either of them so far and having climbed up the cobbler god knows how many times I felt that knowing the area would be pretty handy specially with snow storms on the agenda.

our_route.gpx Open full screen  NB: Walkhighlands is not responsible for the accuracy of gpx files in users posts
I got up at 5:30 am

and was on the way just after 6:30am. Rather shocking as I passionately hate getting up early…but things you do for the hills….

I arrived at the car park in Arrochar at 7:50am and saw 2 other cars….so I wasn’t alone.
Getting ready at my car, the first 2 men walked past me shouting a happy good morning

and carried on up the hill.
When I sorted my bag I left and made my way up the well trodden path up to the cobbler. By that time it was kind of light and within the first 15min of leaving my car I had to stop to put my waterproof trousers on….well fair enough showers were on the forecast.

After leaving the forest and hitting the open, the cobbler presented itself and it is just a great wee mountain to look at. I carried on and started to overtake the two pairs of walkers who were in front. 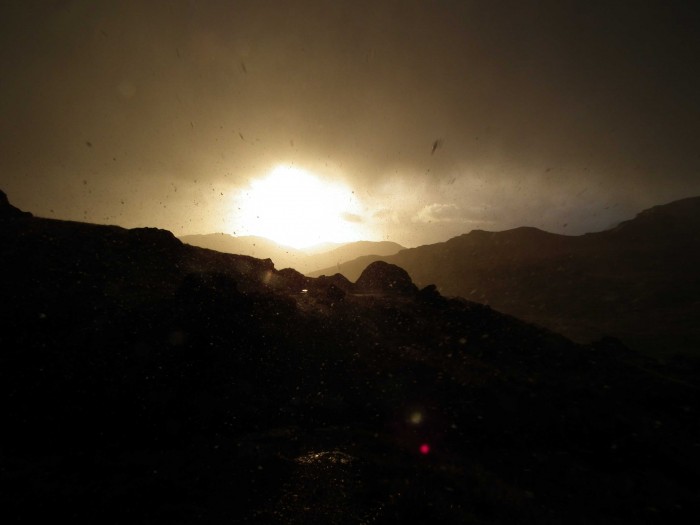 The light suddenly changed into an eerie yellow and while I stopped to try to capture the light, the first snowflake hit me. I quickly put my camera away and within second I was in the middle of a snowstorm…the snow well it was more a snow and hail mix hit my face and pulling my hood down as far as I could I marched on…it was pretty miserable as I could only stare down, as any attempt to look up made me cry out in pain…bloody frontal wind! 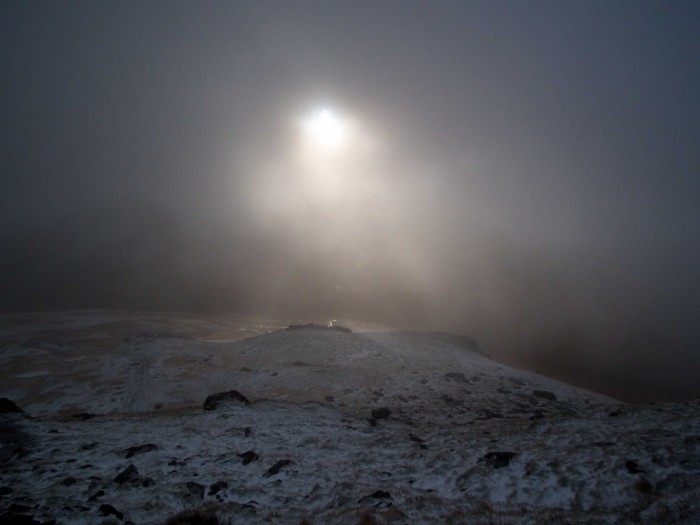 As quick as the snow started as quickly it stopped and I realized I got to the start of the walk up Ben Ime. In front of me was a field of bog and when I started walking the snow was back at full force. Trying to avoid the worst boggy places, while being hit hard with the wind I walked around like a drunk person…I looked back and realized that there was no one behind me anymore. I guessed the other ones either took shelter or went up the Cobbler. Being alone up a hill is a great feeling it just makes you realize that you have to be pretty careful. Relentless I plodded on when suddenly the wind stopped. 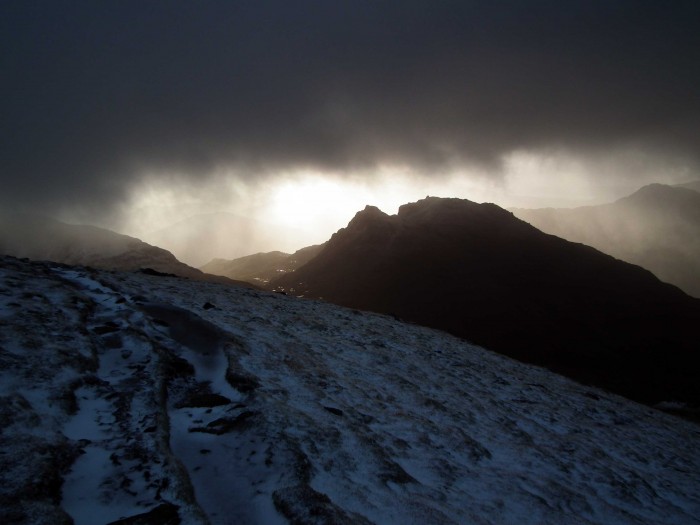 I looked around and realized I got into the lee side of the mountain. The weather all around me was spectacular. Huge clouds of snow were battering the surrounding mountains, the wind was howling and clouds were flying past me with incredible speed.
I had to stop so many times because it was just amazing. 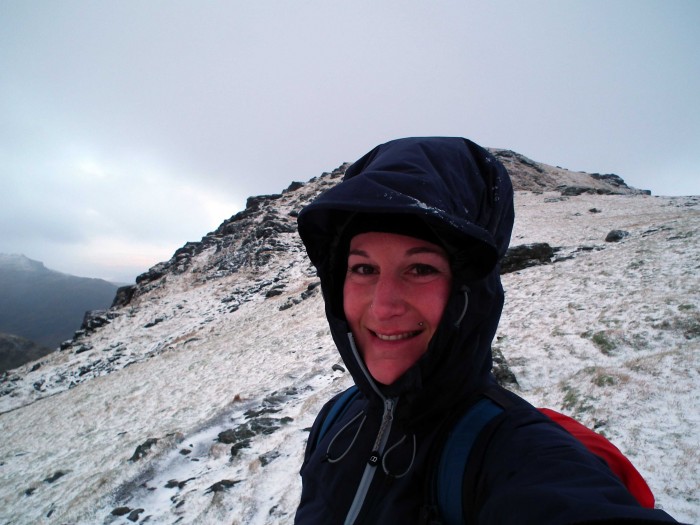 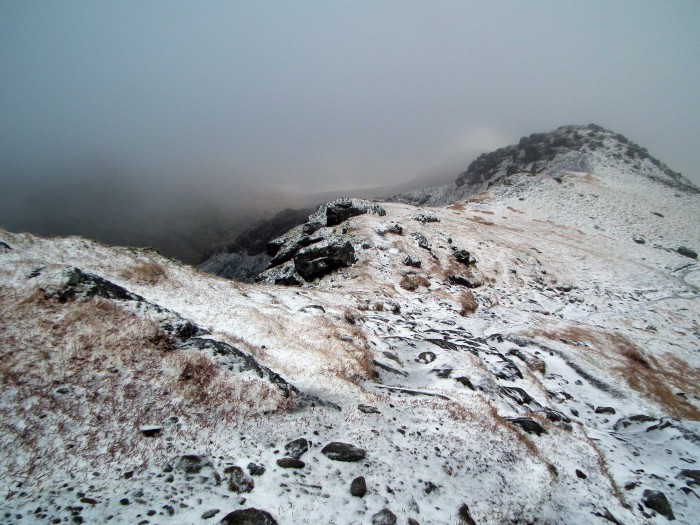 Walking amongst this with no wind and snow was one of the strangest experiences I ever had. It can only be described as the eye of the storm. I made my way to the top of Ben Ime and arrived there 2:40h after I left my car.

I stopped to take some photos when I was suddenly hit by a gust of wind which threw me backwards, crouching down I held onto the rocks and looked up again and suddenly saw an orange bag flying high in the clouds. Looking at my back I realized that it was my rain cover…damn it! 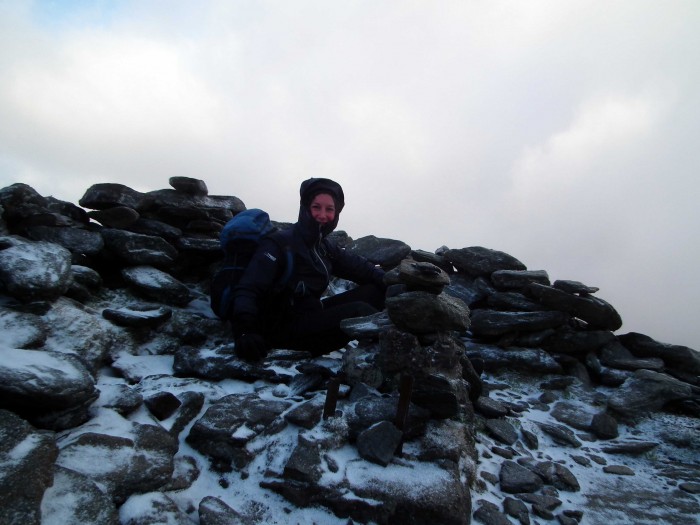 On top of Ime

As the wind was just too strong and I still had Ben Narnain to do, I turned back and made my way down the hill. On the way up I met 2 of the previous walkers and we had a chat about the hills and one of them told me that he also just recently joined the walkhighlands website…so if you read this …hello again! 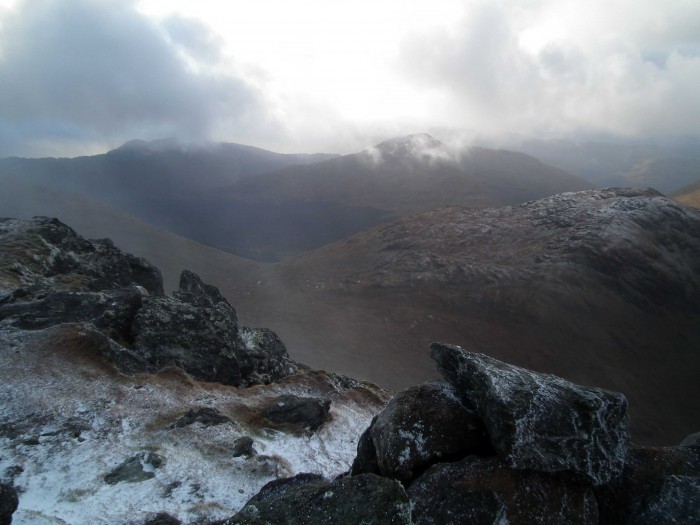 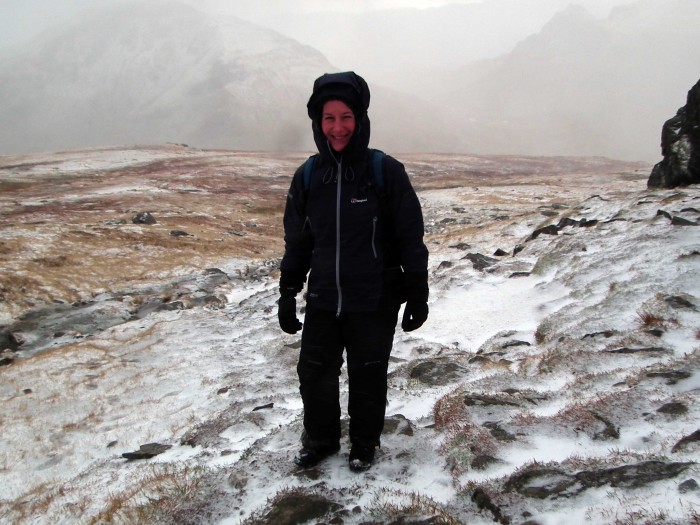 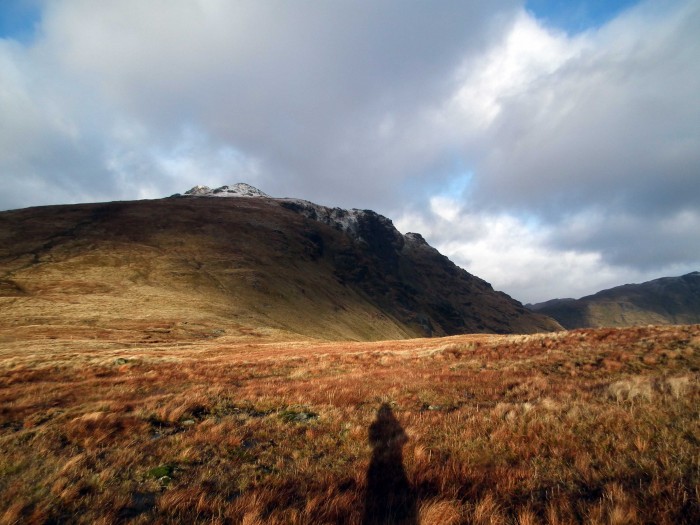 Walking down further the weather suddenly changed and within 2 min the clouds disappeared and the sun broke through the clouds….Awwwww!
If there anything nicer??? It certainly brought a smile to my face and I continued up Ben Narnain. Just before I reached the top the wind and the snow picked up again and really started to show itself in its real force. At the time I was walking over a boulder field and
the storm just threw me around. Walking was really difficult and when I reached the top I only took some photos and made my way down. By that time the force of the wind was really painful again and looking down I walked on the way down…or well that’s what I thought I did. 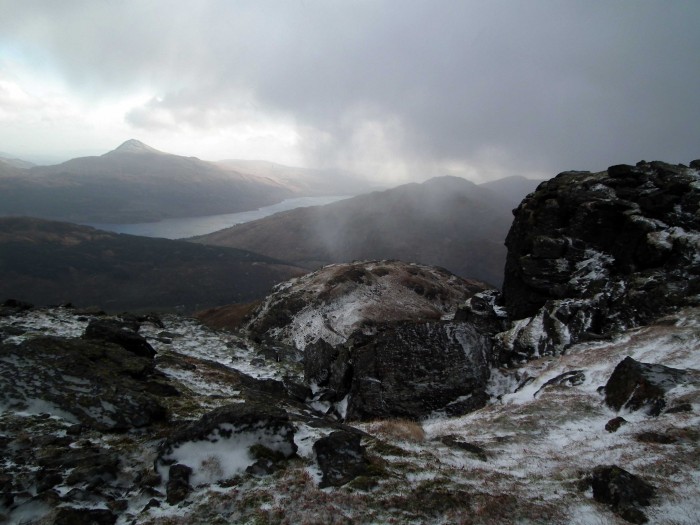 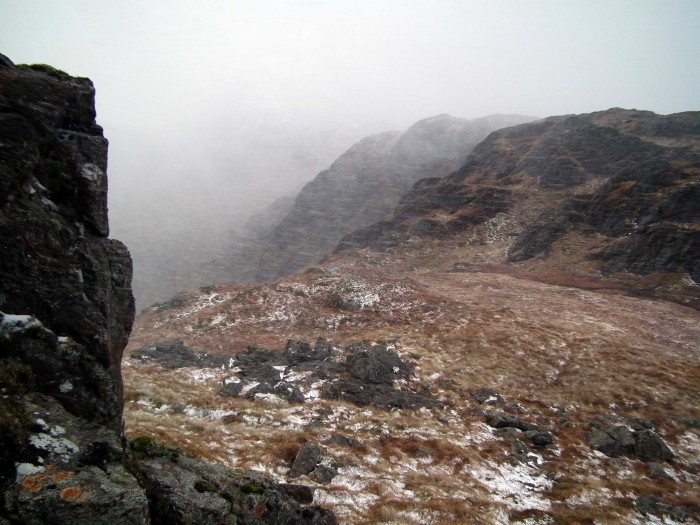 When it got bad 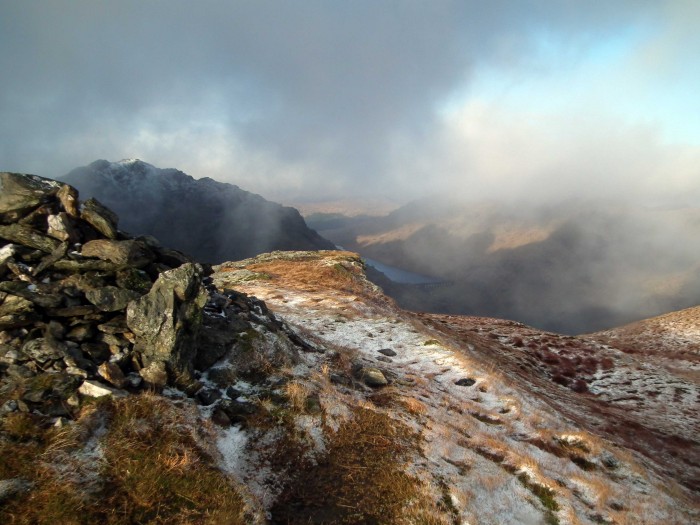 I walked for a quite while and realized that I was pretty hungry. It was after 12 and apart from a bowl of cereal at 6 am I didnt had anything. Around the same time I looked around and realized that the surrounding looked rather strange….I really wasn’t sure where I was anymore ad looking back I saw no other walkers.
Confused I decided that I needed food first. I found shelter and had my bagel and a flask of hot coffee. Feeling better again I picked up my bag and walked to a nearly cliff to see where I was. Putting my bag down on a big rock in front of me I was suddenly hit by a gale….next thing I realized was that my backpack (which weighted about 4-5 kilos) was lifted up in the air and was on the way down the hill…I tried to stand up, but the gale threw me down on my knees again. Crouching down while digging my poles into the ground I made my way down the hill to get my bag (luckily my bag landed in a wee hole) The cairn on top of A'Chrois Ben Narnain on the left and Ben Ime on the right....in the middle the walk I took

I put it back on my back and while looking around I realized the mistake I made. Apart from heading towards Cruach nam Miseag, which would have brought me back to the path, I continued up to A’Chrois.
Standing in the storm I considered my option…I could try to make my way down from there….without a map maybe not that easy or I could walk back…
I looked ahead and saw the cairn on top of A’Chrois and the decision was made…I had to get up there.

I continued walking and crossing the shoulder when the storm reached its strongest point. At times I could hardly breath and I struggled to put my poles down as they kept on flying side ways….completely and utterly mad!
There were times when the wind pushed me over and I actually had to throw myself to the ground in order not to fall. What I had experiences at the top of Narnain was nothing in comparison further down.
The wind finally calmed down to a more walkable condition and I reached the top of A’Chrois. I have to say the view from there were amazing…Loch Sloy towards my left, Loch Lonmond and Loch Katherine next to Ben Lomond and Loch Long towards my right. Knowing in which direction I had to go as Loch Long was to my right I made my way down the hill….there seemed to be some faint paths but they seemed to stop and towards the end there were only grassy sloped rather waterlogged but doable. I got to the forest and when I decided that it was probably best to walk along the fence I saw a path…I couldn’t believe it but the path definitely existed and lead me down a pretty steep path along some beautiful waterfalls, all the way down to the forest road. From there it was an easy way back to the car. Hey ur a very brave lady. great report. Thanks Enjoyed reading and the pics.

Well done you! Love the mushy pic too

Lol wasnt surprised not to see wee dogs flying past, after my rucksack took off! A'Chrois is really lovely...would do that one again as well!

Was this saturday or today?

sometimes these days are the best,can't wait till more of this: Excellent report and the pictures are fantastic,especially 'Ben Ime and Ben Narnain 056.jpg (112.99 KiB)',the photography skills in that one are astounding

It was pretty wild up there today,my face still stings. Well done on continuing on to the other hills. We did have a wee scout about looking for your parachute....sorry rain cover,it might be in Loch Lomond by now.

Good to meet a fellow 'Walkhighlander' out and about.

We were up The Cobbler today and we are two heavy guys ...after the ascent up the front the weather was deplorable ... We could hardly stand and decided to go back out the wind....
Once we cut off the path down we took the ridge walk back along high above the A83...which was challenging in the gusts of wind

I watched from the summit of The Cobbler as wave after wave of prilled snow ..needle like..swathed over it

U are very very lucky that fotune favoured you today

Well done in those conditions ! Im ment to be away on Tuesday but it may be cancelled due to the weather.