After checking the forecast for Saturday which was for 40-60mph winds,gusting to 70-90mph,snow and rain with a 30% chance of cloud free tops i decided that as i hadnt been out in two weeks that i was going to go for it and the Eassains ridge was the one for me.
Cue sleeping in till 9:30am on the saturday so my plans were knocked back by 24hrs which ended up no bad thing,the weather report was no different for sunday and i was up and away for 6am for the 3h30m drive to Fersit.As it was dark until i reached Fort William i didnt really know what the tops of the hills were like,would there be snow? would it rain all day? but on departing Fort William for Fersit i could see that the majority of hills were snowcapped and my excitement grew,you see winter is my best time of year for walking,a time when,for me,the hills look more like mountains and the scenery becomes even better and the hills also become quieter....just as i like it!

I arrived at the car park further on from the Loch and followed the track toward the dam,turning off at the fork and following it for another wee while before noticing a path that would take me into the hillside,i say path but it was more of a boggy burn to be honest so the choice of winter boots was a good one-dry feet all day! I followed the path up to the start of the ascent of Meall Cian Dearg,and briefly it started to snow-yipee!! there is a decent path that snakes up the hill although i did cross one extremely boggy section here but i made good time and soon the views toward the two Munro's opened up and what a view it was! both tops were covered in snow and i now had fantastic views to the Grey Corries and Stob Ban but it did strike me how dark the sky was over these hills and i realised whether it was rain of snow,it was heading my way. the arrival of the blizzard I continued on and at around 900 odd metres the dark sky swept in on top of me,the wind was as strong as i've ever felt on a hill and i found myself in the middle of a blizzard which was stinging my face as i struggled to stay upright so i decided to sit it out hoping it would pass and after about 5 minutes it did,much to my joy as the first summit was clear and i was keen to get there before the cloud or snow came back in.Shortly after i reached the summit of Stob a'Choire Mheadhoin and the views were breathtaking! but with the wind still trying to push me over i retreated to the side of the hill to get some shelter and have some coffee,admiring Stob Coire Eassain as the blizzards came and went over it,watching as it dissapeared and re-appeared.I then set off for the next summit,which is really close but it ended up taking me an hour and a half due to the winds which were now much stronger as i approached the bealach and again i had to just hunker down when it was uneasy to stand up and let the worst pass before setting off again.Soon after i reached the top of Stob Coire Eassain
and just as i touched the cairn another blizzard enveloped me and this made hard work of trying to get a summit picture as everytime i set the camera down with the timer on the camera kept getting blown off the rock i had it perched on,cue many many attempts at this and eventually i got what i was after 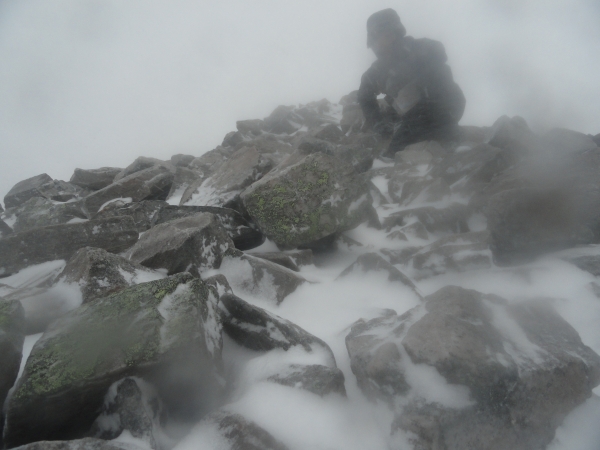 so i hastily retreated down the path a bit so i could have my lunch and take in the views of Stob a'Choire Mheadhoin which looked awesome in its winter setting. Not long after i headed down to the bealach and had a choice to make,go down the path into the glen and around the hillside toward the van or take on another ascent of Stoba'Choire Mheadhoin,i chose the latter although i did find this hard going and my legs were starting to tire from wearing much heavier boots but i plodded on and was up and over the summit and heading back down the way i came up.The only thing of note on the way back was finding the path down Meall Cian Dearg,i reckon there is quite a few different paths here and i ended up on the N/NE side which was steep,wet and slippy but i took my time and arrived safely on the path which led me back to the track,then back to the van. Loch Treig and the dam her is a short video clip i took on the walk [youtube]youtu.be/INspz-U8Mhc[/youtube]
All in all this was probably the walk of the year so far for me and i look forward to many more days having fun in the snow,

winter has officially arrived for me-bring it on!

Reminds me of a few trips last year.

I have been looking at trying these 2 hills for a while and will hopefully manage in the not too distant future.

Nice one Ian - hard but rewarding work by the look of it. The summit photo of you on Stob Choire Eassain is a classic of its type

"Winter has arrived!" - unfortunately it seems to have buggered off again! No sign of the blocking high pressure over the near continent shifting any time soon

A fine old medley of pictures, a cracking pair of hills to boot. Did you say it was snowing

Lots of cracking photos but my fave has got to be the one with the snow flying past your face. A bit sore for you but a treat for us

I noticed your Garmin etrix i have one, the only thing I find useful with it is height reading. Can you use it to get you to summit on cloudy day. How do you input walk routes

it was a super day!
polly- i never ever get flustered when i'm out and i've done alot of solo walking in terribly bad conditions,the etrex gives me the confidence to do this as i can never get lost(theoretically,lol) and i feel i have enough common sense to deal with bad conditions,as for the summit pic...i was loving it but annoyed that i couldnt get the camera to sit long enough to get a photo

darren- i use it for grid reference's to check where i am on the map if the cloud is in on me,checking i'm on the correct summit or you can input summit co-ordinates in advance by
1-go to mark waypoint(i think) and press enter
2-scroll down to the co-ordinates and press enter
3-now manually input the grid ref of the summit(or any particular point you want to head for) and press 'ok'(note what no. of waypoint it is)
4-go to waypoints and when you find the one you want,click it and select 'go to' it'll point you as the crow flies mind you but also gives you the distance to your waypoint and expected time of arrival
i wouldnt be without it now

Cheers mate. That's what i always thought about summit co-ordinates it will obviously take you in straight line. You yourself would have to pick the route there, do you find the co-ordinates you are reading of unit are close to actual position

yeh,its pretty accurate to about 5m or so

Looks a little chilly up there Iain and good to get out in conditions like that. I'm half hoping to get these two done before the end of the year

well done on getting anything done with the weekend forcasts. im not too sure about winter having arrived just yet though, well done again.

Ha ha,like the 1st attempt at summit pic Iain,well done on sticking those 2 out,yet to do these ones,would they be straight forward enough on a good winter,s day?

You are one commited walker Iain

Love the picture of you mid blizard. Great report