beinn ime a winter warm up

beinn ime a winter warm up


with our lomond mc club weekend meet in the cairngorms cancelled milesy phoned and asked did i fancy a little winter warm up with his brother in law craig. an attempt at beinn ime was proposed and with 80 mph winds and snow forcast it would get us into winter mode. we set of from the car park with clear skies and a bit of sunshine ! could mwis have got it wrong ? emerging from the forest track at the dam we headed up the alllt a bhalachain past the narnain boulders. the cobbler looked alpinesk with its dusting of snow, i never tire of looking at this beautiful mountain. as we headed up into coire a bhalachain the sky darkened and the winds picked up, gloves and hardshells on we crossed the bealach a mhaim, we met a walker with his dog who said he had to abandon his attempt at beinn ime as the wind driven snow was blinding him and he didnt have any goggles or glasses. we continued up the boggy path the snow and wind was picking up pace with every metre gained. at about 850 metres the snow was about a foot in depth obliterating any path and the spindrift being blown about made visibility poor. there is a little rise about 900 metres and once over this the wind really picked up, we were having difficulty standing in some of the gusts and the spindrift made route finding difficult. milesy and craig on final rise to summit

we went up through a little craggy area thinking it was the summit but it was the little ring contour to the south east and at this point the snow shower passed over and gave us a view ahead to the summit. dont you just love those little windows that let you see what youve been missing ! we made our way up the last little rise to the summit, having a good laugh trying to get a summit pick in an absolute hoolie. no stopping we about turned and headed back down looking for somewere sheltered to stop for some food. our first real sheltered spot was the narnain boulders over 3 km away ! we sheltered there and had some grub before heading back down to the car and home. a testing day with the winds, the snow was thin until about 800 metres and even then hadnt froze enough that we needed ice axe or crampons on, but it was good to get into that winter zone and im hoping for some good winter walking and climbing this season. craig and me at summit

well done guys in getting out in those conditions

Good for you getting out there and having a warm-up.......hopefully that's for us next weekend!

Well done guys on getting out in these conditions. Note to myself..must do more winter climbing. Good info
on the glasses/goggles. What a difference a couple of weeks make when we were climbing The Cobbler in perfect conditions!
I guess that what makes Scotland great!

mountain thyme wrote:well done guys in getting out in those conditions

you were invited mt, but heard you looked like an oompaloompa !

Bod wrote:Good for you getting out there and having a warm-up.......hopefully that's for us next weekend!

not been out for a while bod, was suffering from cabin fever.

it wasnt that tough monty, the wind and visibility from 800 metres up and back down was entertaining, but the snow was soft so we never got the chance to don the crampons and use the ice axe, carried them though and with all the extra winter gear in the rucksacks it was a useful execise.

Jockstar wrote:Well done guys on getting out in these conditions. Note to myself..must do more winter climbing. Good info
on the glasses/goggles. What a difference a couple of weeks make when we were climbing The Cobbler in perfect conditions!
I guess that what makes Scotland great!

goggles are a very useful item in winter jockstar, i used my sunglasses and they did the trick until the visibility lowered, and yes what a difference a few weeks makes, here im standing on top of the cobbler 4 weeks ago in glorious sunshine. Crazy conditions so well done on getting to the summit, eventually.

Il reply to your goggle question on my TR here, also on mine incase you miss it.

My goggles are cheapos from Decathlon at the Fort, paid about £10. Think TK Maxx do goggles also.

Best ones are with vents but cost more.

Great fun and great warming up for winter again! Had my sack stuffed as heavy as I could in training for soul sucking winter climbing walk ins

Even spotted a cracking wee line on the cobbler to climb but cant find it in the guidebook. 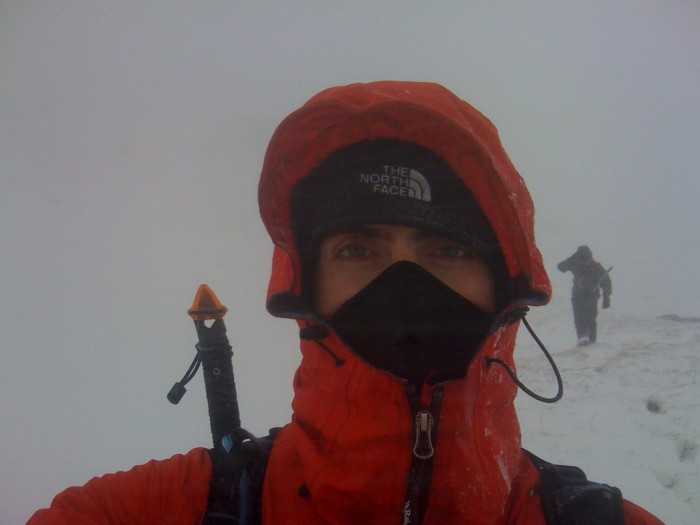