BBC Radio Cumbria Weatherman got it soooo wrong this weekend ! He promised me that Sunday would be the better day & plans for Saturday were changed to comply. 08:00 on Sunday did indeed look less windy and relatively cloud free but with forecasts for snow in Scotland. He got that a few miles wrong as well, as when myself and Damson climbed out of the car for the start of todays walk, within 15 mins the wind picked up and horizontal sleet tried to drive us back to the car. In fact I think Damson was quite up for that as she did not like the weather at all.
To stay out of the wind a little we climbed up the right hand side of Causey and left of Outerside up to the col between Scar Crags and Sail. This was green as we set off but most definitely white in the couple of hours climbing up there.
Heading left we climbed on to the tops of Scar Crags & Causey Pike keeping low to prevent being blown off and taking a few pictures when the cloud broke for long enough. The sleet had turned to snow now which actually improved conditions and so the plan for Barrow was resurrected (I was planning on going straight over the tops and home as the views weren't great).
Back tracking slightly we took the steeper descent path directly towards Outerside and then out onto Barrow trying to prevent ourselves dropping to far by taking paths through the bracken rather than the main paths. From Barrow down towards Braithwaite and back along the road back to the car. 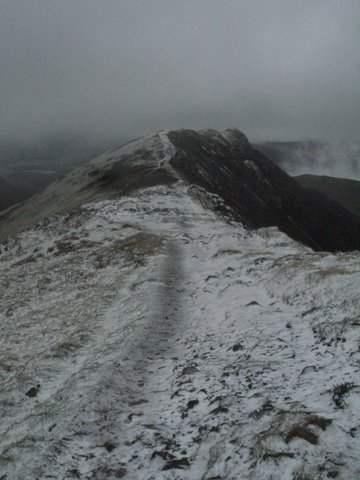 View down to Derwent from near Causey Pike summit At every key decision point / junction today, the weather turned worse as soon as I'd chosen a path which made me doubly doubt whether I should have been up there in the first place. It made the day feel weird, as though I was making the wrong decision on every turn. Still !! another 3 for the book and now I'm back and starting to warm up again, I quite enjoyed the cobwebs being blown away and completing the challenge.
Not sure Damson agrees with me though!! She seems to like sitting in front of the fire more than sleet and snow. I think Damson might be glad that Barrow is the last of the day !!

Enjoyed reading your report and some good photos

Last time I walked Barrow just did it on its own before going back home from a week in Keswick. It was so hot we ran out of water.....a big mistake

We had a couple of snow showers this morning and don't remember the forecast saying that!

I did Grizedale Pike round to Grasmoor and back over Sail before dropping to Outerside earlier in the year. It was pretty warm that day as well and I was worn out well before getting back to Braithwaite. Today was about finishing that little corner of Lakeland but the weather prevented me from venturing across to Ard Crags, etc.
Gives me another excuse to wander about for a few hours though.

Pics weren't brilliant because of the weather conditions.
BBC says we are in for quite a bit of snow in next 2 days.

Phooooey wrote:Gives me another excuse to wander about for a few hours though.

Phooooey wrote:BBC says we are in for quite a bit of snow in next 2 days.

They've probably got that wrong as well

Looks like you were right ! Dalton & Barow are damp and windy but no snow as yet ! Had a slight fall last night but didn't stick. After yesterday, I don't think I'll be in the fells for a couple of days. Brrrrrrrrr!!

Phooooey wrote:After yesterday, I don't think I'll be in the fells for a couple of days. Brrrrrrrrr!!