With stretch now home this was "life after stretch". Alan s only had Sun free so we were heading out no matter the weather,the only decision to make was where.Glensee,Glencoe,Cairngorms,too many to choose,in the end Cairngorms won & Bnyack More was the luck bugger.
Had been keeping in touch with "pollyh"on FB and asked her if she fancied tagging along(much better looking than stretch)Tomyboy also said he would join in the fun,so plans were laid & of we set heading for the "gorms".Just after Drumochter it started to snow and slowly became a "white out" and doubts had started to appear weather we would make or destination,this was soon answered when we managed to drive into a layby on the A9 without even knowing

This made our mind up Bnyack More would have to wait for another day,but where to now.1st shout was Ben Vrackie,but on the way there I had an even better idea.Why not Carn na Caim & A"Bhuideanach Beag,why these two I hear you ask.Well I have done them before & none of the others had,but even better I had always said to alan s I would come back and climb them in winter conditions with him,but he would then need to go back over Ben Cruachan with me which I have never done,so here was my chance to make sure I kept my part of the bargin

Anyway suited & booted and on our way for 8.45am Nice easy start following the landrover track,where you gain height fairly quick & easy with some nice views opening up over to the Mondhlaith hills The snow at this point was fairly thin in most places with the odd drift here & there but nothing to worry about.The wind was starting to blow a hoollie,but helping us from behind,and soon we were nearly on the bealach 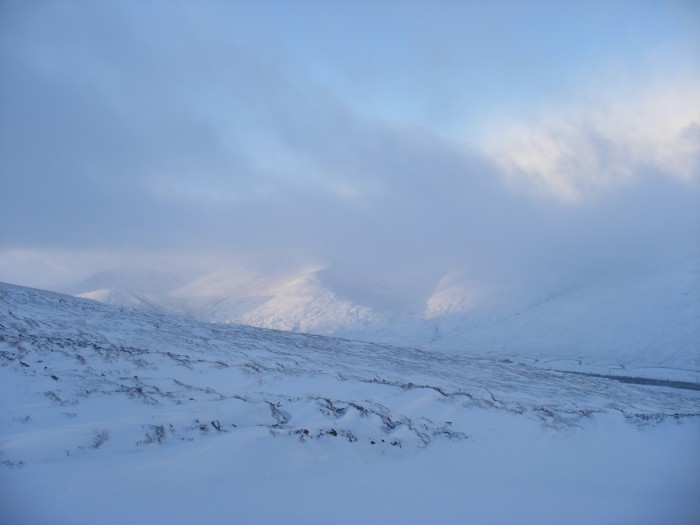 Back from where we came

Once we reached the bealach,the snow started and gave us some "white out"conditions for a short while,but everybody was enjoying the test,with polly showing some nifty footwork when conditions allowed Fairly soon the summit was reached & a few pics taken Not sure how cold the wind chill was,but we tried to drop into the lea for some food, where it became apparent to me at least that not much food would be eaten.Water reserve frozen,Rolls frozen rockhard,Bananas frozen enought to snap

and battery in camera died with wind chill.Once I/we had eaten we made our way back to the bealach,where a show of hands resulted in us heading for home rather than heading for A"Bhuideanach,probably the right choice,with the snow drifts in some parts 5/6ft deep in places.
Once back at the car,a quick change was done,then a drive down to Pitlochry & the Moulin Inn for steak & chips for Alan & me,steak & ale pie for Pauline & French onion soup for Tommy

before the drive back home & a warm bath.
Great time had by all and sundry,with a promise to meet back up soon for some more winter fun.

Nice one Gammy - in those conditions, I commend you.

You must have been on the A9 about the same time as us Gammy,driving in those conditions worries me more than the walking

We were just over the way from you on other side of road and also cut our walk short,i'm 6 ft 4 and the snow in places was up to my waist

Did get some cracking views though,must return soon,well done on getting out


Alan, Tommy and I had a cracking day out in the snow all because of this self-less act by you - very much appreciated

Oh and cheers for the geography lesson too! xx 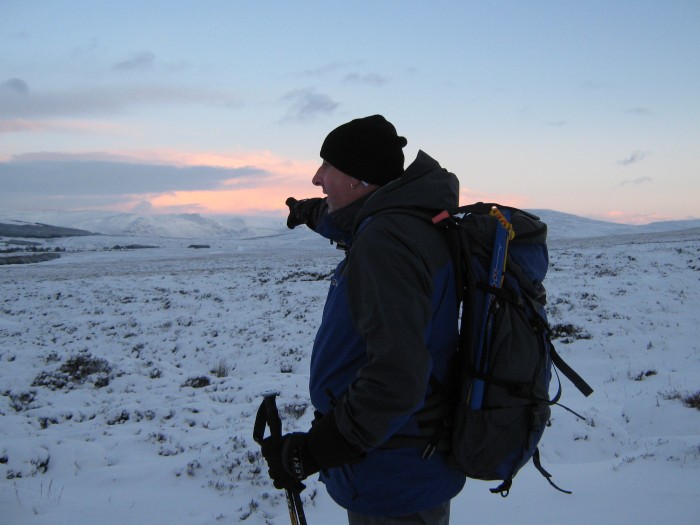 Listen to what I'm telling you, it may come up in the Kintail Quiz!!!

Er how many letters???

Hi gammy,
wee were up these two hills just in front of you wee left the lay by at 8.30 done A'Bhuidheanach Bheag fisrt then on to Carn na Caim wee thought about turning back at the bealach as the dug wasnt liking it very much,still nice to get out though.

Ah, the Moulin Inn. Cannae whack it wi' a big stick! As for the outdoor part of the day, looks like you had a similar windchill as i was getting on Ben Tirran! Nearly froze my eyeballs over!

congrats on reaching any hills on sunday,looks like you all had fun

saturday was better roads wise but had a tough walk due to the snow further up the road at newtonmore,going over the three Monadhliath Munros

Nice one mate, Thanks for letting us bag this one even though you have already done it (also it puts me one up on the munro count)

Look forward to the next meet up

Looks like polly is going to punch you in first photo.

rocket-ron wrote:Looks like polly is going to punch you in first photo.

Oh aye, Gammy was getting too close to my chocolate

Remember polly moment on the lips. Life time on the hips