Catching up on walk reports again......this one’s for Sunday 27 November, not the winter wonderland that some of you have enjoyed the weekend just gone (Christmas shopping for me

), but a good wee walk all the same. Forecast winds of 100mph+ for this particular weekend didn’t bode well for the toupee. Plays havoc with the Velcro fastening you see

So, rather than suffer the usual 2.30a.m. Sunday morning alarm I decided to take advantage of a wee lie in, to 8.10 a.m.no less, and head south (or what we like to refer to where I come from as ‘saaarrff’).

The hill of choice today was White Coomb, via the circuit route suggested on WH starting at the Grey Mare’s falls. Due to a slight oversight at Moffat went the wrong way and was heading back north (or what I like to call ‘norf’). Eventually got myself sorted and arrived at the Grey Mare’s car park just before 11.30a.m. A bit breezy, but with plenty of blue sky I was thinking a god choice had been made. Overall I wasn’t disappointed either. The start of the day at the car partk Another view of the Tail The excellent path up by the Tail

Arriving at the top of the falls and the path levels off nicely, following alongside the Tail Burn to the lovely Loch Skeen. There was a fair amount of water flowing down the burn, and I was realising that at some point a little later on I would be needing to cross this gentle flowing stream Drumlins and view toward Mid Craig Oh well, that was for later. At the Loch I should apparently have found a path taking me slightly to the right of the Loch and picking up a fence line and dry stone wall. For some reason though I ended up following a rather boggy path alongside the Loch itself. It was a nice walk though, being right next to the Loch, but eventually I got fed up of the bog and decided to work my way over the boggy heather to pick up the path I should have been on alongside the wall and fence. Things improved from here, but there were still plenty of patches of bog to navigate.

Then came the steepest section of the day, although in reality it’s a teeny weenie little section and soon enough the path was swinging to the top of Loch Craig. Great views south and east 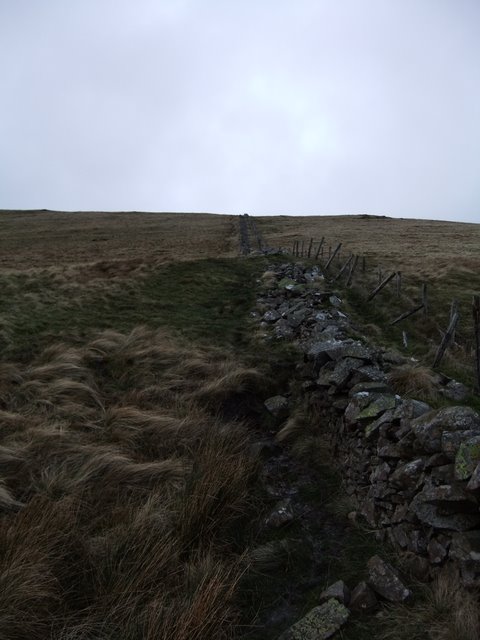 At this point I probably had the strongest winds of the day, but never anything to compare with what was forecast for the Highlands. Blinkin’ cold though all the same and my pinkies were certainly feeling it when removed from my trooser pockets to take photos (yes, I did have gloves but didn’t feel inclined to stop and put them on). I was certainly happy to be avoiding any great adventure in the North this weekend, that was for sure.

From Loch Craig all the way round to White Coomb was a fantastic, relaxed stravaig

No pressure and I was just wandering along and enjoying the views as I headed over Firthybrig Head , Donald’s Cleuch Head and Firthope Rig View back to Lochcraig Head as I was a wanderin' Ahead to White Coomb More views on my wandering View back the way I had come

Given the late start the sun was dropping out the sky eventually, but all this was doping was adding to the quality of the views as I was heading toward the Corbett summit and the moated cairn. The sun starting to descend in the sky The moated cairn of White Coomb :) The setting sun effect ....... wished I'd have been on the summit still as I reckon the view from the top would have been great

There seemed to be a higher point a little away from the cairn so I dutifully made my way over to check it out. Looking back at the cairn that suddenly looked to be higher than the point I was standing at

How often does that happen, eh

By now it was ‘brass monkeys’ on the top so I was quickly making my way down via Rough Craigs. A very easy, but interesting descent. Ended up on my backside once again, adding another bum slide to my increasingly varied repertoire Back toward Rough Craigs

The route followed the line of the dry stone wall which I had been following round in the circuit fro Loch Skeen. This brought me to the side of Tail Burn just above one of the small

falls above the Grey Mare’s Tail. No chance of crossing at that point, but the path seemed to be heading back up stream, so I dutifully followed. After a while I was thinking I could be back at Loch Skeen and still find nowhere suitable to cross the burn. The water was pretty fast flowing and was clearly pretty deep too. Eventually I thought to myself “If I’m gonna get wet feet at some point then I’m gonna get wet feet at some point, so here’s as good a place as any to get wet feet”. So I simply launched myself into the water

Knee deep at worst, but I was in and over the other side in next to no time. The right boot did ok and the foot wasn’t too wet. Left boot didn’t fair quite so well.......and the result was a very wet foot

Never mind, I was on the correct side of the Burn and now it was just a quick walk back down to the car, where I could get out of my very wet sock.

For me this was a quick walk and pretty easy too, but a really good one all the same. And the lie in was just a bonus

Missed walking this weekend due to Christmas shopping duties

, but hopefully normal service can be resumed soon enough – I’ve got plans for more 2.30a.m. Sunday mornings before the year’s oot

Reminded me of when doing this in winter few years back.

Great spot to have a bite to eat.

Great TR....even if on the short side

Enjoyed reading your report and some brilliant views in all directions

good report, we were there back in Summer(ish) and did same walk up until descending from White Coombe, I couldn't tell you which path we came down but ended up back at Loch Skeen as I was unsure of crossing points and didn't want wet boots for entire long weekend.

That looked good pete,got this down for a winter walk so could be heading down that way soon

Great place, was there in january and the whole place had a slight sprinkling of snow was braw loved loch skene!good stuff!

Nice one, Pete. Little less awkward for you from Carrickshire.