Left Aberdeen at about 4.30am wasn’t sure of the conditions on the way to Dalwhinnie via Aviemore to pick-up Spiderwebb and RocketRon. Just past Inverurie everywhere covered in snow but the road was still good to drive, until I got to turn off for Dufftown near Huntly after about a mile had to turn back and take the Keith road, which wasn’t much better but had some kinda grip. After a few slides down the road arrived at Aviemore about 6.50 an hour early, and texted the lads to say where was parked, got about 20 mins kip. Left once the lads arrived and a slight skate past exit for A9 were back on track, the A9 was ok but didn’t know if I was being over cautious or folks overtaking were just in an awful hurry. We parked at layby 94 and walked 80 yards back and over the gate to take up road that leads to Scottish Hydro, a quad and 4x4 passed and weather was ok until about 30 mins later a blizzard started, but wind was behind us, at this time quad was coming back down track and stopped to ask where we was headed Ron said the top, which he replied are ye nuts Yes said Ron haha. When we came to a fork we took left path and then once we reached the bothy, theres a small bridge that we crossed and kept a straight line until we reached the faint path on hill. Snow had stopped and sun was out, but once we were about 15 mins into climb, the wind picked up, it was blowing in from the west cant say how strong it was, but couldn’t turn to face it. We did have cover in some areas from it, but it was nice to look at the snow dust on the hill to. We stopped for a few breathers on the way and had a laugh as we or Ron tried to navigate through the deep snow, lying flat to use arms and legs to get over parts. At the summit we sat behind the high carn as wind was still strong, sun was out and good views, after a few photos and a bit to eat, we headed towards Creag Ruadh. The descent was steep at this side and snow waist deep but made it more interesting and a few laughs as we took a few tumbles to, once we were down took another break before deciding which way to climb Creag Ruadh instead of diagonal we went up by the fence looks steep and is, but looked shorter too. Wasn’t long into to this and I decided to try going diagonal thought it might be easier, but bad move as ended up trying to climb over snow covered boulders, after getting word to the lads I was struggling headed back down to Loch Cuaich and followed path back to car. Drive back home was quicker as roads had cleared of snow. 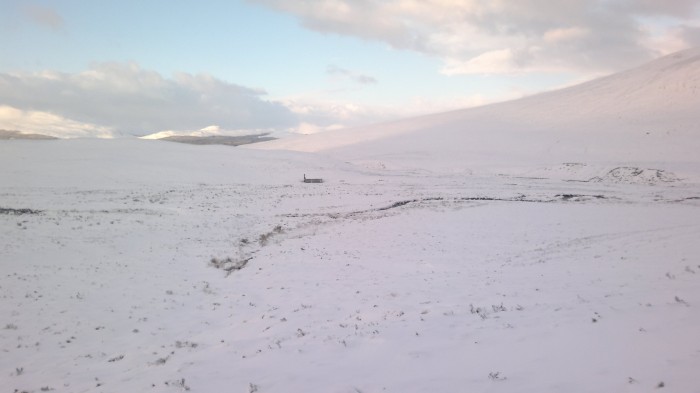 What time did you end up getting home last night tomsie

Was about 18.45 which wasnt bad, Dufftown road was opened only had snow on one side on higher ground for about 2 miles, other then that was all good, 2 tins of Stella and out like a light

Glad you got home OK, you must have been writing your report as I did mine !!

Cheers Dave enjoyed it too, we got lucky with the weather.

Great effort given the conditions. Its the driving about when its like this that puts me off. Due to pick up a new (to me) car next week that will have winter tyres. Should give me a bit more confidence.

Alastair S wrote:Great effort given the conditions. Its the driving about when its like this that puts me off. Due to pick up a new (to me) car next week that will have winter tyres. Should give me a bit more confidence.

Cheaper to buy winter tyres and stick on your old car

Another great report on what looks like a fantastic day out

So did you have three nationalities out on the hills together? Who was who?

I'll reply to that one Polly as RR has gone to bed...maybe thats his secret early nights, found out he did a round of the 4 munros (Beinn Dearg - Ullapool) in 7.5 hrs in winter, took me 11 hrs in April !!! He even beat a bloke up the forestry track who was on a bike !! We've no chance...any ideas ?

Anyways back to the question.

and me, Barnet, Norf Lundon !

But all now resident in Scotland !!

Yeah am born and bred inverness

Come on Dave am not that fast. When i go out with my mate garry. He makes me look like a snail. The speed he walks at

Come on Dave am not that fast. When i go out with my mate garry. He makes me look like a snail. The speed he walks at

That will make me a big fat sloth then

Come on Fatty dont be so hard on yourself

Glad you saw more than I did on this hill