Old Aberdeen. 'Fittie' and the Beach

Old Aberdeen. 'Fittie' and the Beach


We started the walk from Aberdeen Railway Station and headed towards Castlegate, which is dominated by the imposing Salvation Army Citadel, which was modelled on Balmoral Castle by architect James Souttar and built in 1896. Following Beach Boulevard, we soon reached the beach. The sky was blue and there was only a gentle breeze, and pebbles and the waves had combined to made attractive patterns in the sand. There were several brave souls, canoeing and surfing on the surprisingly large waves. 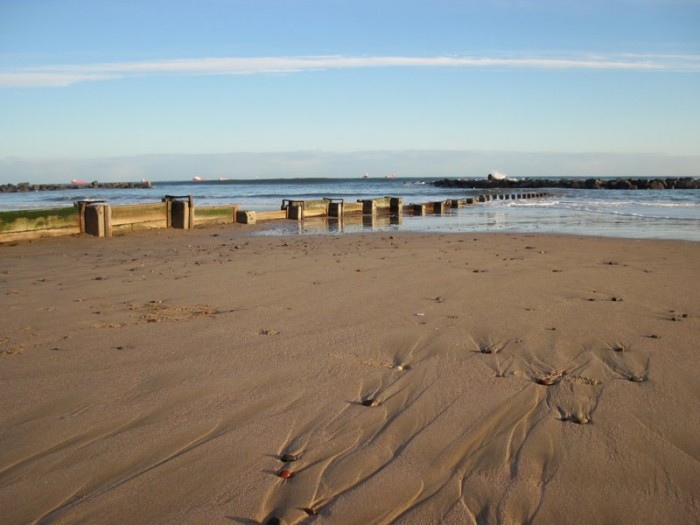 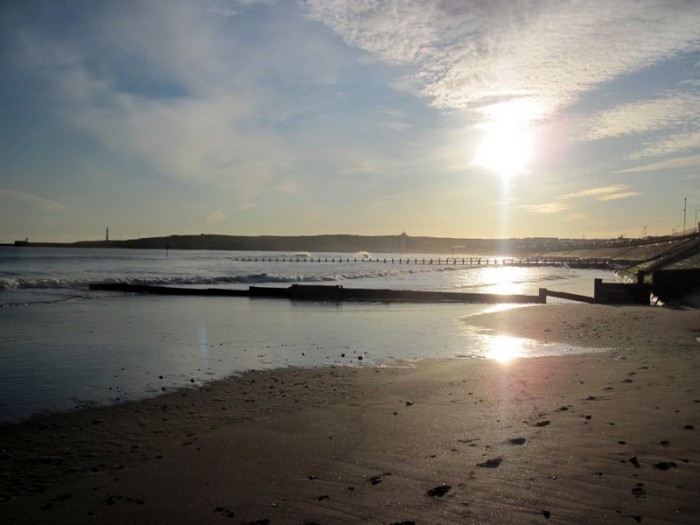 Footdee (pronounced 'Fittie') is an old fishing village and each of the terraced houses seems to have its own postage-stamp sized area of garden within the square, each with individual outbuildings, sheds and huts, personalised by the residents. Leaving Footdee, we passed by the 'Roundhouse' (the old Navigation Control Centre for the harbour) which may have been built in the late 1700s, and the old Customs House, before retracing our steps up the beach towards the mouth of the River Don. 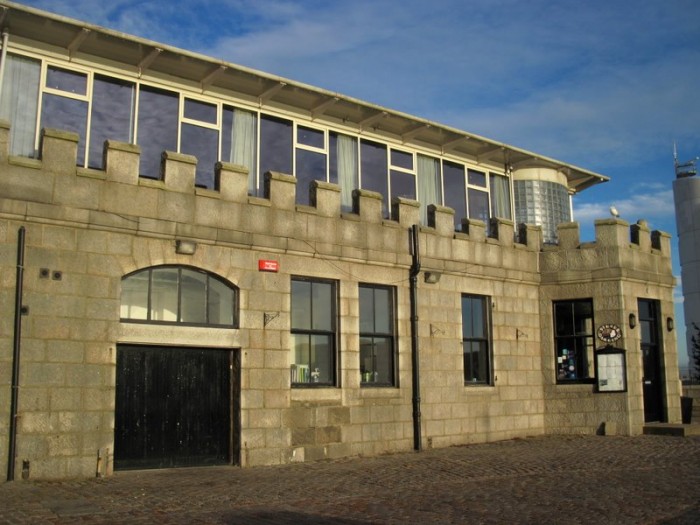 Heading inland past the Donmouth Nature Reserve, the view was now dominated by the lofty and imposing skyscrapers in Seaton - such a contrast with unassuming, compact Fittie. 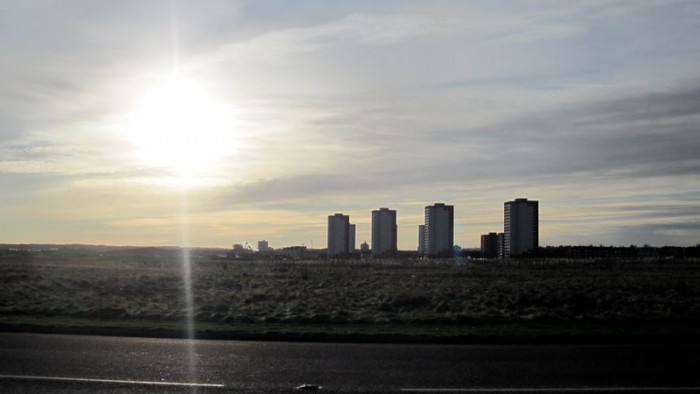 We crossed the Bridge of Don then immediately turned off down a path alongside the river, then through Seaton Park, eventually arriving at St Machar's Cathedral. The recent gales had clearly taken their toll on several trees within the kirkyard. From there, we walked down the Chanonry, which was once home to the canons of the cathedral, perhaps since before 1240, and then down the historic, cobbled High Street which is terminated at its northern end by the Townhouse. This Georgian building was designed in 1788 and has had many different uses - two schools; a hall for different societies and the Incorporated Trades of Old Aberdeen; a Masonic hall; a council meeting place; and as police cells.
Many of the historic buildings along the High Street are now part of the University of Aberdeen, and King's College is perhaps the most impressive. 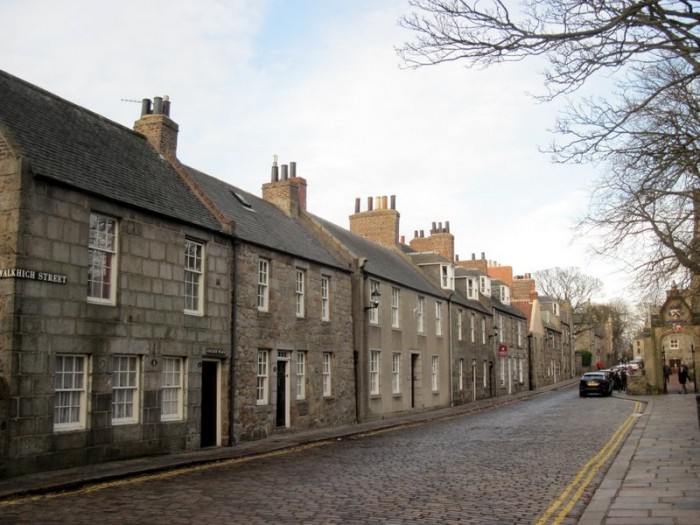 Further down the High Street there are some impressive gates - the Powis Gates - topped off by Turkish style minarets and erected in the 1800s. 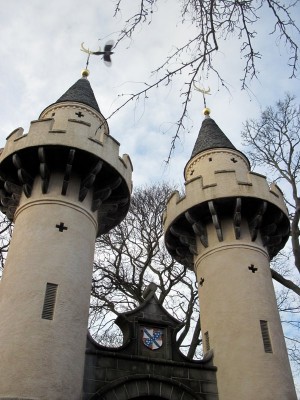 A walk of great interest and diversity - who says Aberdeen is just 'the Grey City'?

fittie-beach-and-old-aberdeen.gpx Open full screen  NB: Walkhighlands is not responsible for the accuracy of gpx files in users posts

Cheers. Some good memories of my 12 months living in the Granite City!

Really like this report, I've spent many happy days on Aberdeen Beach which I think must be one of the most beautiful beaches in Scotland. Unfortunately also the coldest

Great to see Fittie, your pictures really give a feel for the place, well done

Excellent report and pics - I used to live in Aberdeen; I've often wandered along that very route. If you can dawdle by the pier, there are often dolphins to be seen, sometimes right inside the harbour. And you forgot to mention the St Machar bar in Old Aberdeen ~ Purveyors of Light Refreshments to the Gentry !

One of my favourite walking routes around Aberdeen...you must have gotten lucky at the Citadel as there are usually groups of 'jakies' congregating there annoying everyone as they wait for their turn in court across the way...I spent many a happy childhood moment in Seaton park...possibly even more beautiful now than it ever has been and giving the Duthie park a run for its money regards floral displays.

I have heard of this bar but dont think i've ever been there. My husband and his mates all used to drink in the Prince of Wales, thats when they were poor university students, they certainly weren't the gentry!! Nowadays I dont go out that much in the city but I do like the Lemon Tree, also the Boat Inn but thats way out in Aboyne.

Ah, the Duthie, my favourite place in the whole north east

Memories....fan I was a loon in Aiberdeenshire, I never fully appreciated my upbringing. The Northern Lights.....

Caberfeidh wrote: And you forgot to mention the St Machar bar in Old Aberdeen ~ Purveyors of Light Refreshments to the Gentry !

Although it is a bit like having a pint in a corridor.

I do love Old Aberdeen though.

morag1 wrote:Really like this report, I've spent many happy days on Aberdeen Beach which I think must be one of the most beautiful beaches in Scotland. Unfortunately also the coldest

when I was working at Foresterhill in my first job I looked after a man who swam in the sea off Aberdeen Beach every day - he was desperate to get out as he hadn't missed a day in 50 years. Mad.

mrssanta wrote:a man who swam in the sea off Aberdeen Beach every day

Sounds like my father in law, although he was never in Foresterhill

We have all heard stories of the Glasgow Hard Man, but make no mistake, Scotland's real hard men come from the North East, it's all those years of battling the elements and the North Sea.

mrssanta wrote:when I was working at Foresterhill

Are you a nurse then?

morag1 wrote: Are you a nurse then?

'fraid not, worse than that, I'm a medic

Tomsie wrote: I'm not 100% but think its John Smith father of William smith that designed the citadel out at balmoral instead of James Souttar

Hi Tomsie, I'm no good at names but I just had a quick look at the Historic Scotland and it seems that James Souttar did design the citadel in Aberdeen. But John Smith was indeed the architect of Balmoral Castle

Thanks for all of your comments

and Caberfeidh - I'll have to go to the pier and watch out for dolphins, and go to the St Machar Bar afterwards - not before, otherwise I'd have no chance of spotting the dolphins