Heading back to my parents for the weekend, I had planned to borrow a car and head out to do a couple of short walks on isolated hills - Carnedd y Ffiliast and Foel Goch specifically. I was rather surprised to find both parents interested in joining me on Carnedd y Ffiliast, which put the lid on the second hill, as a) they are slower and b) they seem completely incapable of making an early start. So despite the fact that we were up by 9:30, and the hill was only an hour's drive away, we started walking at 13:20. Work that one out!

our_route.gpx Open full screen  NB: Walkhighlands is not responsible for the accuracy of gpx files in users posts
Driving through Nant Ffrancon and Betws y Coed, the weather had looked worse than the forecast, but our hill was out of the cloud at least, and had a dusting of snow down to 450m. The first section involved a walk up to a col at 430m. Unexpectedly, this was tarmac the whole way. The wind was howling, and we were hit by a few spots of rain, but on the other hand, there were some atmospheric views towards Snowdonia, with the odd spot of sun. Most of the higher hills were in the clag, so we hadn't made a bad choice.

Cwm Penanner at the start of the walk: 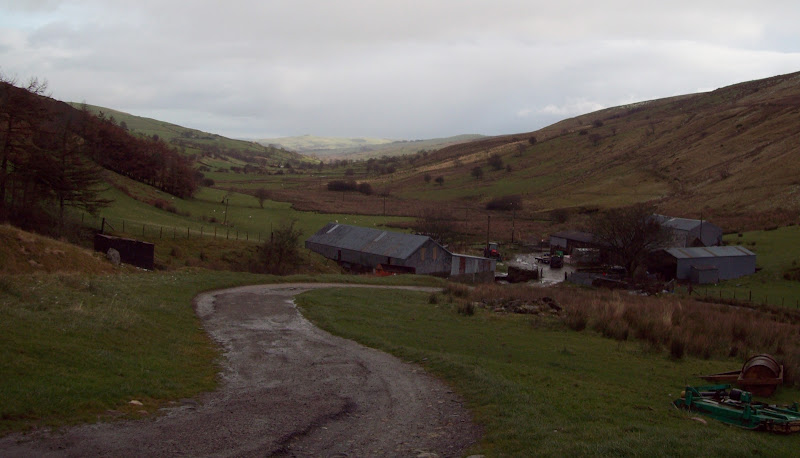 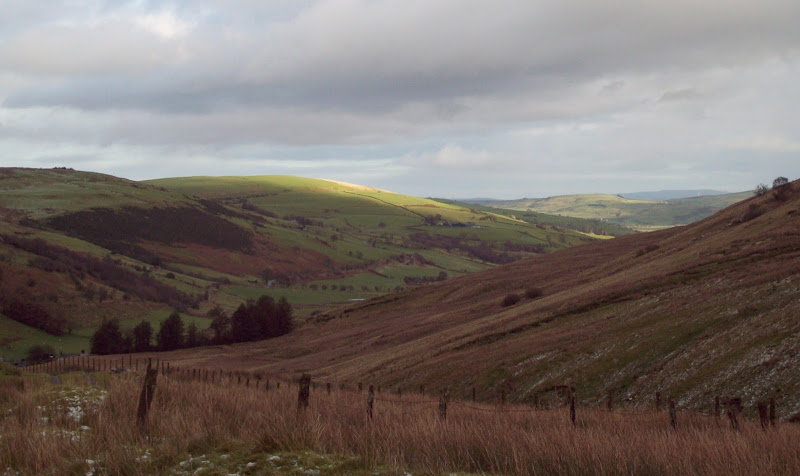 Gylchedd from the top of the pass: 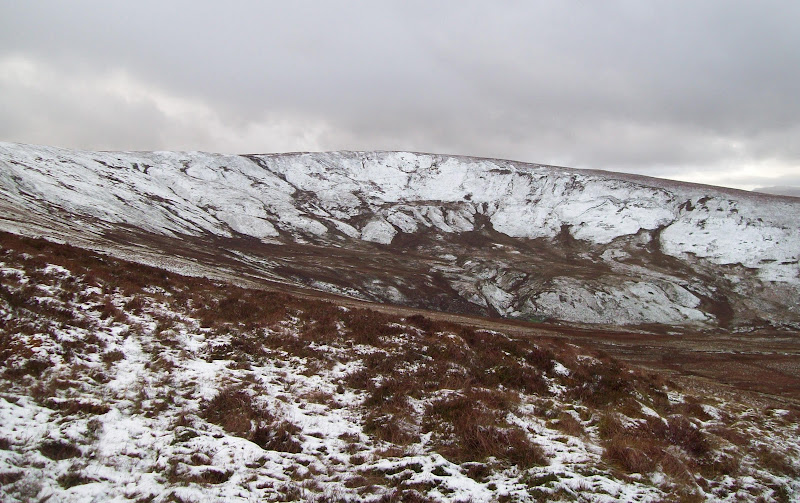 A faint 4x4 track led us easily up the NE shoulder of Waun Garnedd y Ffiliast, where it abandoned us in deep heather and overgrown peat hags. Some atmospheric sky, but heavy going and clearly mum's least favourite terrain. A fence led us over Waun Garnedd y Ffiliast towards the main summit. The wind was easy enough to walk in, but cuttingly cold.

Moelwyns and Moel Siabod from the ascent: 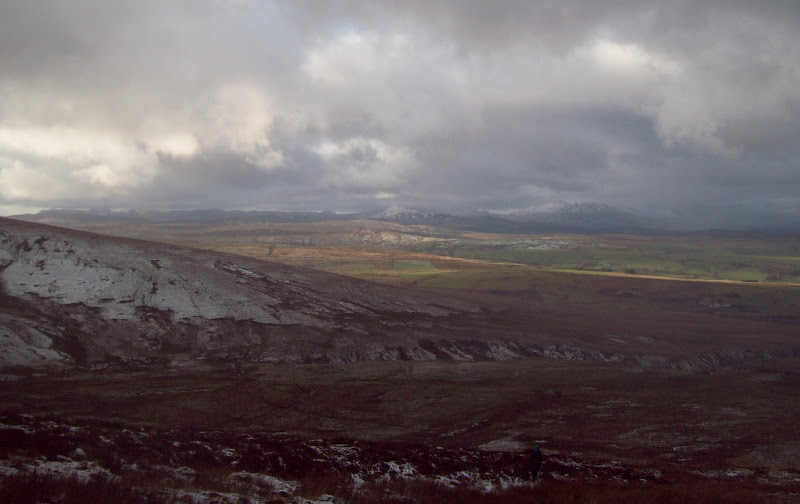 Carneddau from the ascent: 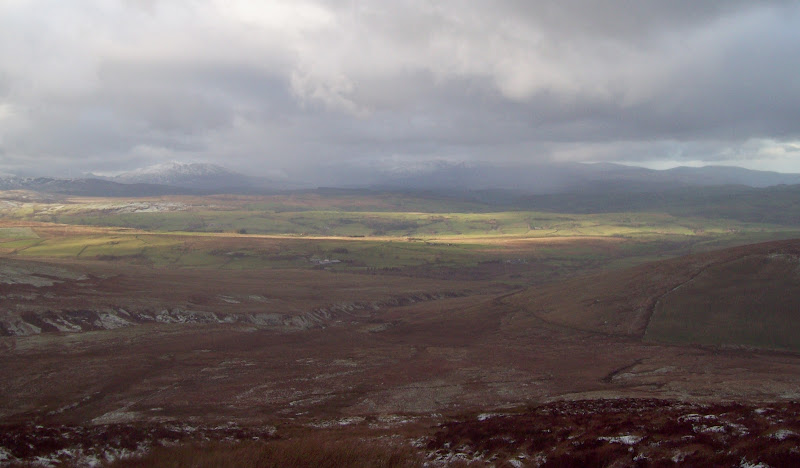 Back to Garn Prys and Mwdwl-eithyn: 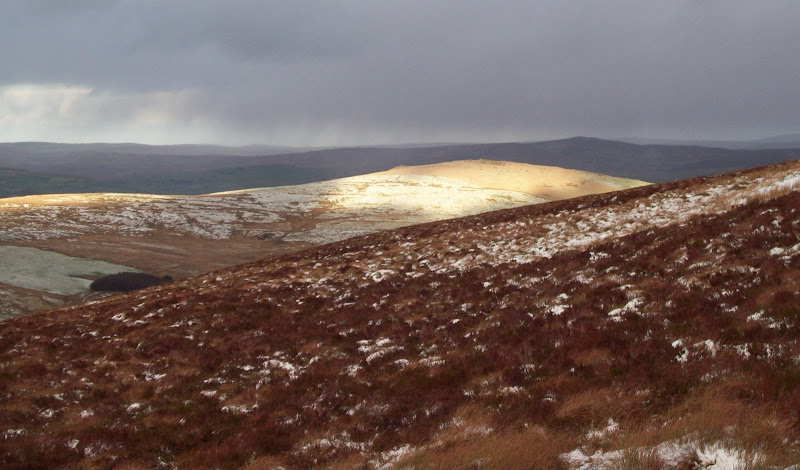 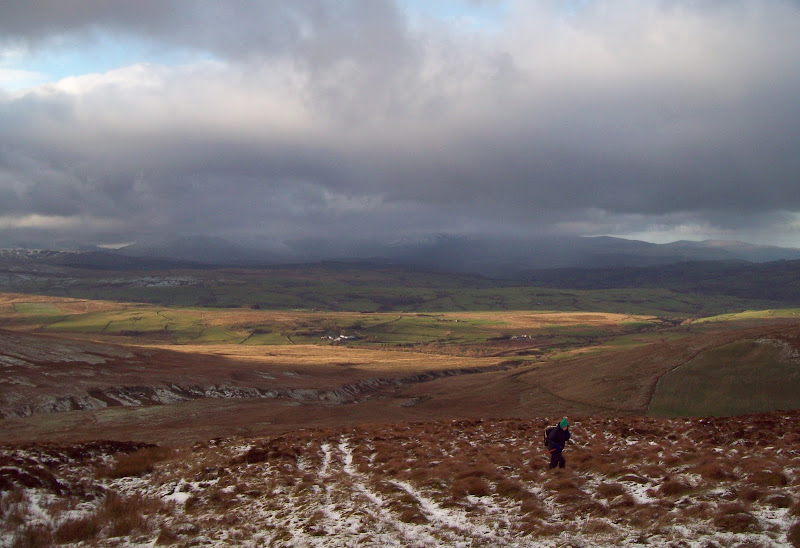 Atmospheric light on the plateau: 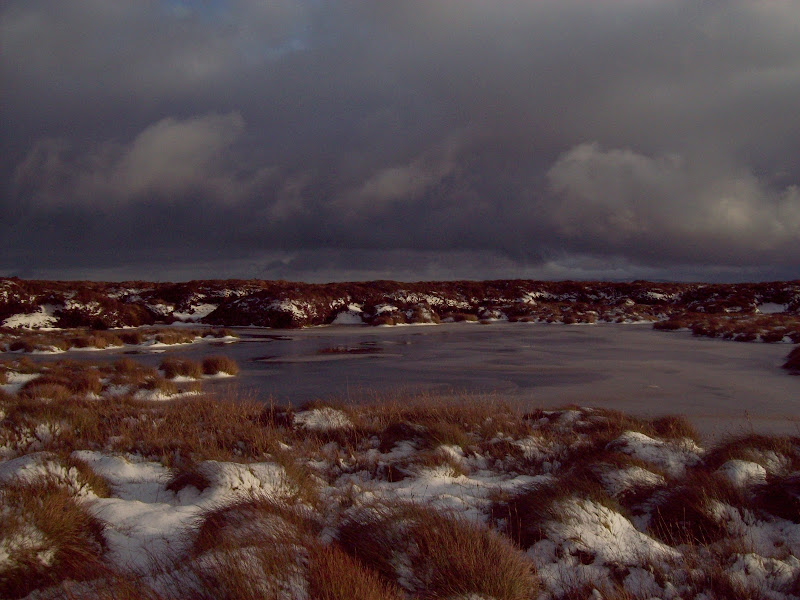 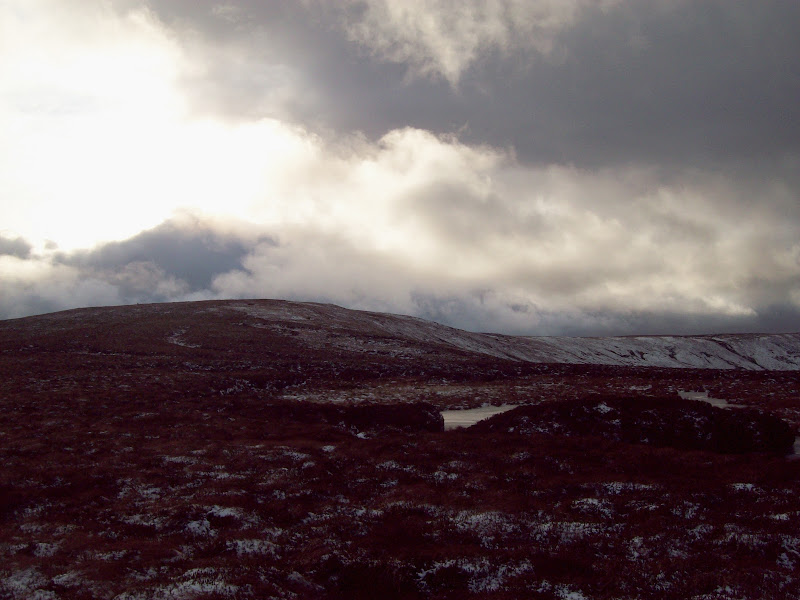 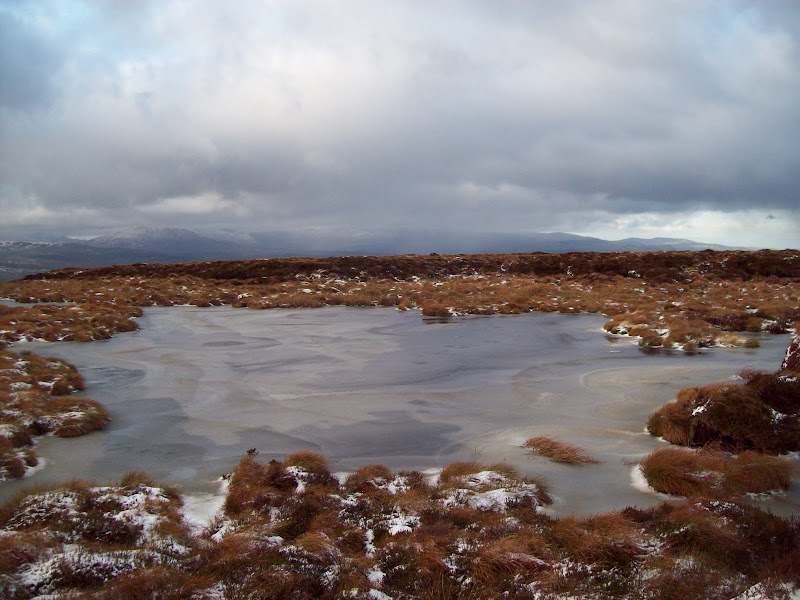 Hard going on the plateau. Mum about to add this to her "20 walks never to do again" list: The main summit with Aran Benllyn in the background: 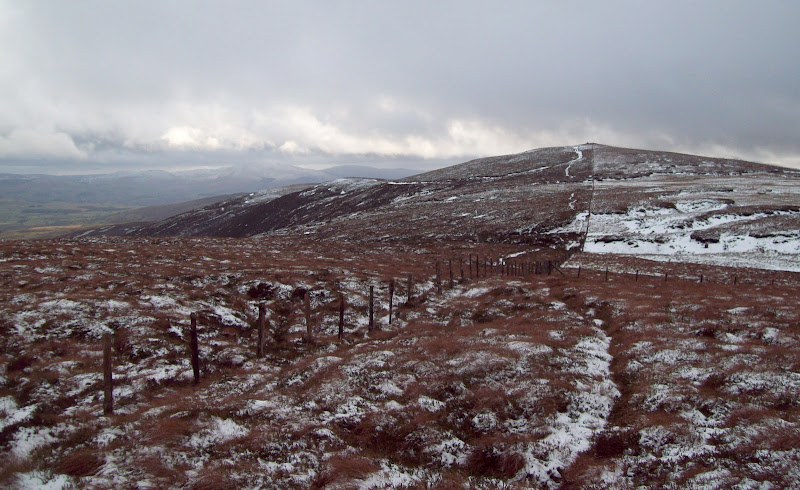 We met the vehicle track up from the south just before the summit, and had a quick look at the views. Aran Benllyn and Arenig Fawr were looking well covered in snow, but also cloud unfortunately, while to the east, the Berwyns were visible. I had wanted to visit the western tops of this hill, but rapidly lost interest in this idea. Dad had the idea of heading NW to the edge of Cwm y Gylchedd to avoid some of the heavy going ground, and this paid off nicely. In the end, we took a descending traverse into the cwm to get out of the wind. A bit squelchy at the bottom, but before long we were back on the tarmac. A good blast of the heating was needed in the car to warm up numb fingers and toes, before heading to Betws y Coed.

Arenig Fach from the summit: 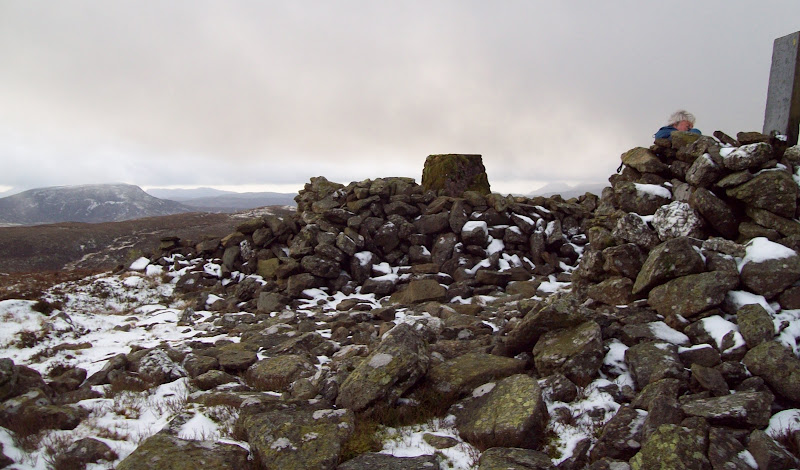 East across Foel Goch to the Berwyns: 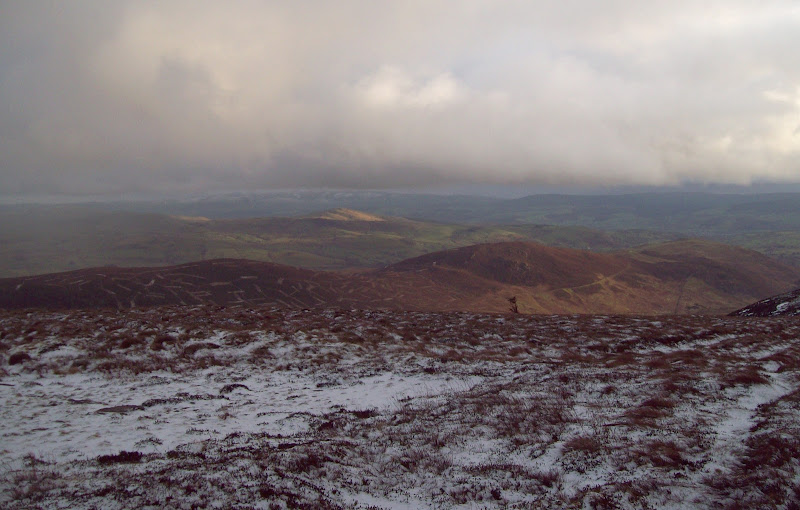 Last bit of atmospheric sky on the plaeau: 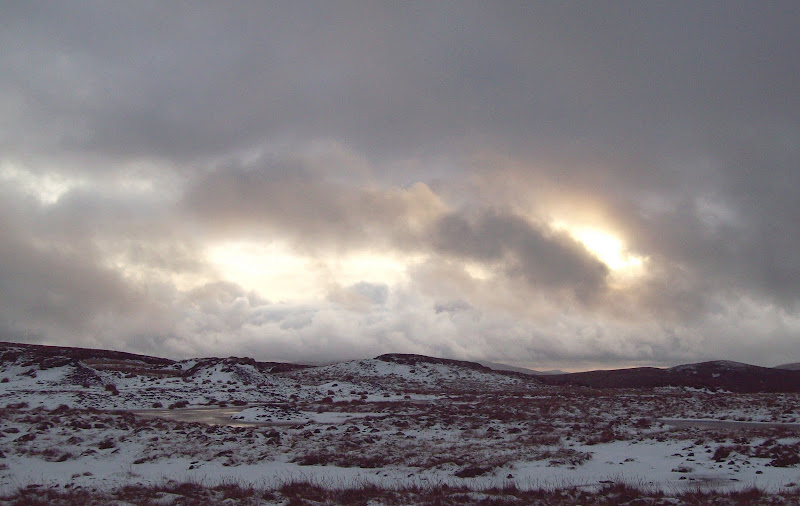 A fairly featureless hill in the end, but one which gave us some different views, and promised an unusual panorama of Snowdonia on a nice day. The weather and conditions weren't quite up to the current Scottish standards, but it made the walk feel a lot longer and harder than it was.

Nice report, Malky. I can relate to the weather conditions you had, as I was only a few miles south of you that day, over on Rhobell Fawr and Dduallt. I know what you mean about that wind - not particularly strong but very cold. I too had a bit of snow on the tops, but was surprised to see none over on the Rhinogs. These early snowfalls must have been quite localised.

Here's a photo from the summit of Ddulallt looking over to roughly where you were - Arening Fach being the dark peak visible between what I take to be Moel Llyfnant and Arenig Fawr. Cheers. The Arenigs seem to have more sunshine on that side! I think the snow was much lower down further inland. We noticed a slight dusting on the very summit of Mynydd Mawr (higher than our hill) on the drive out, but the snowline was about 200m lower on Carnedd y Ffiliast.

Funnily, we were just discussing doing Rhobell Fawr and Duallt between gusts of wind. Sometime in the spring probably, unless I go on my own (giving me a slight chance of starting before midday

Hi Malky, Its been many years since I've been up here, and only once. I had plans of a wild-camp on Carnedd y Ffiliast or Carnedd Llechwedd Llyfn earlier this year, but it never came off, but still would like to re-visit and camp sometime soon, so my question is, did you see any short flat grassy area's about and suitable near to the summit?
Thanks Alan.

It was a very rough hill apart from the top part of our descent. Much of the ground between the summit and point SH869452 was surprisingly flat and grassy. There were some peat hags, but I reckon you'd find somewhere along there, maybe near the edge of Cwm y Gylchedd. I can't remember much about the vegetation around the summit itself - it was lightly covered in snow and we were too cold to take much notice!

I climbed Carnedd y Filiast via the track from the south, and I suspect the terrain that side is at least a lot drier, albeit generally more heathery than grass. (Definitely forget the area to the west towards Llechwedd-Llyfn - you're lucky to find even a single dry footstep that side!). From memory the area between Foel-Boeth and Y Drum about a mile to the south might be the most hospitable.

(Great photo, Red Peak, by the way - and probably a good choice to take Dduallt on with a bit of frost in the ground!).

Thanks Guys, perhaps Foel-Boeth would be a good alt. and not so far to walk

It makes me tired just trying to read or even pronounce those hills = I'll stick with the Scottish hills.

kevsbald wrote:It makes me tired just trying to read or even pronounce those hills = I'll stick with the Scottish hills.

LOL of course Gaelic names are easy to pronounce!