my original plan was for some winter climbing in stob coie nan lochan with some members of the lomond mountaineering club. we met at the car park at 9 30, burly and ben were climbing the day before and said most of the routes were banked out ! climbing talk for too much snow. so harry suggested the aonach eagach ? too right i said this has been on my to do list for a number of years. me being the least experienced of the group became rope boy, that means i get to lug the rope up 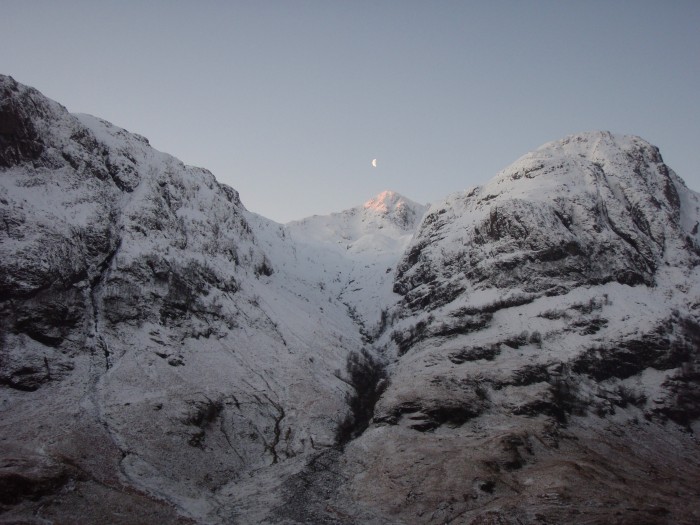 there seemed to be some people in front of us as there was fresh footprints, a joy that someone else has broke the trail. 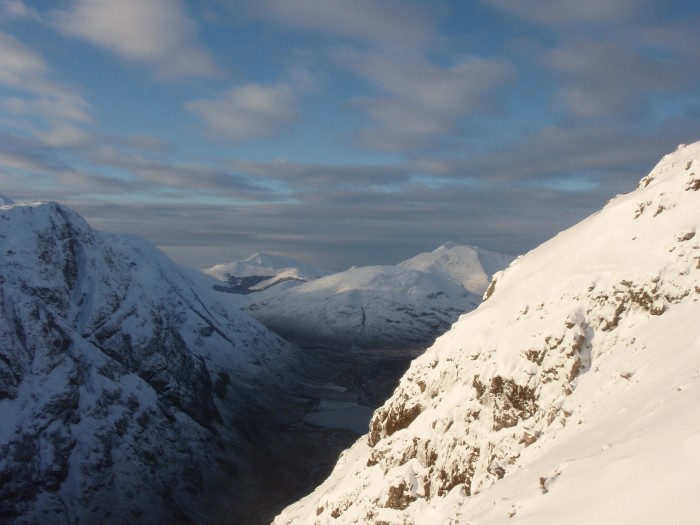 the sun was out views all around were spectacular as we continued up steeply towards am bodach. 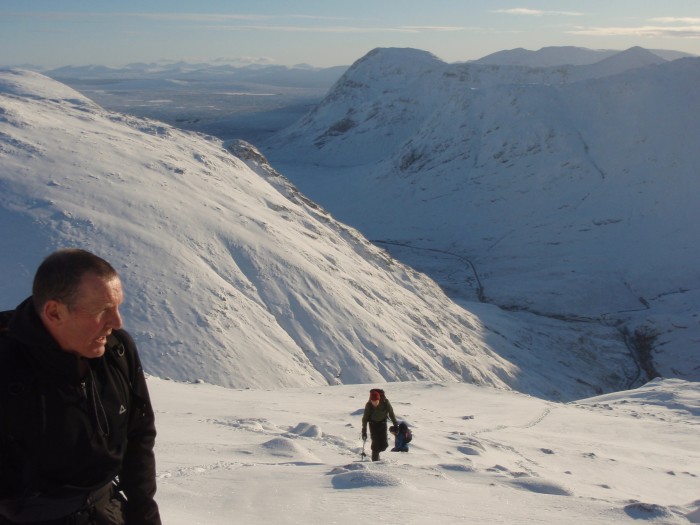 sun out on the ascent 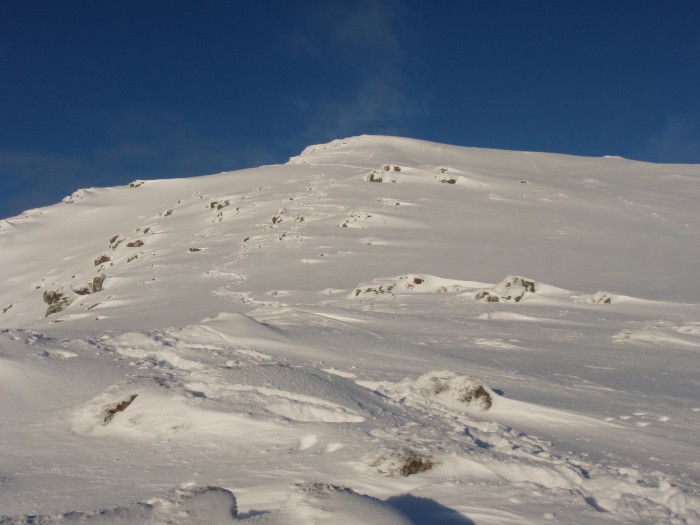 we stopped at the top to don crampons, helmets and harnesses, a single technical axe was the weapons of choice. we start walking westward towards the start of the ridge, sun still out and excitement building. 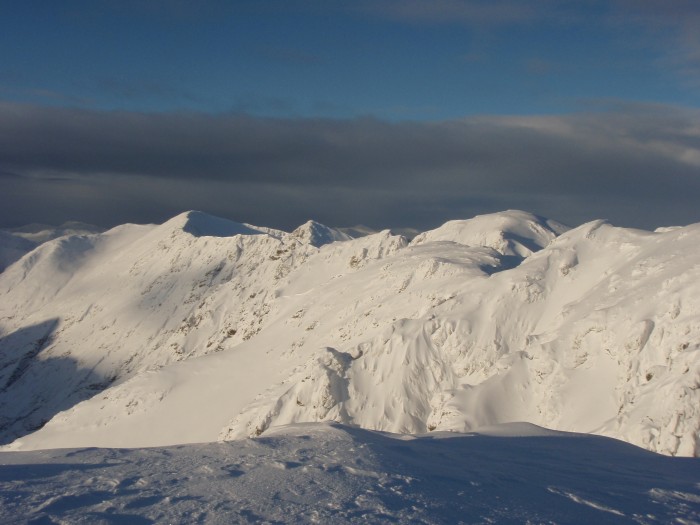 1st look along the ridge

the going was good, soft snow and the way ahead marked out by the people who were ahead of us, but we hadnt seen them yet. it wasnt long before we came to our first akward bit, a difficult down climb, but a sling had been left in situe, so we abseiled down, i felt we were now getting into it. 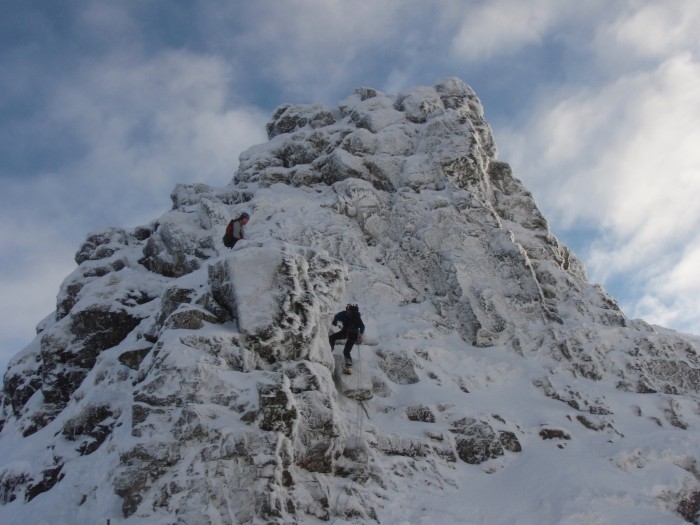 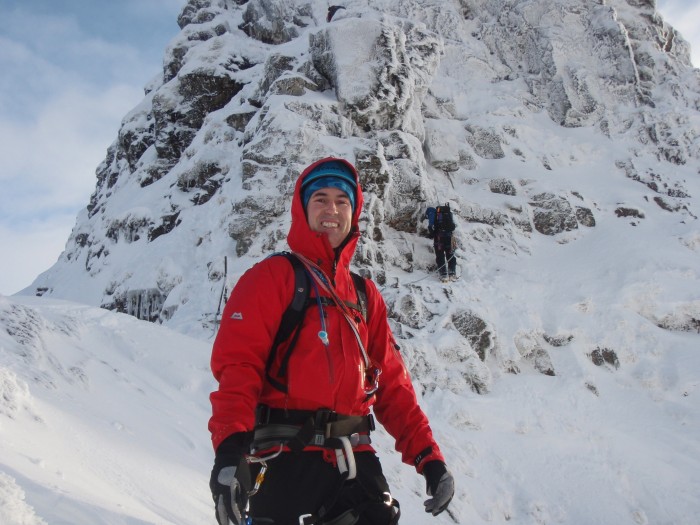 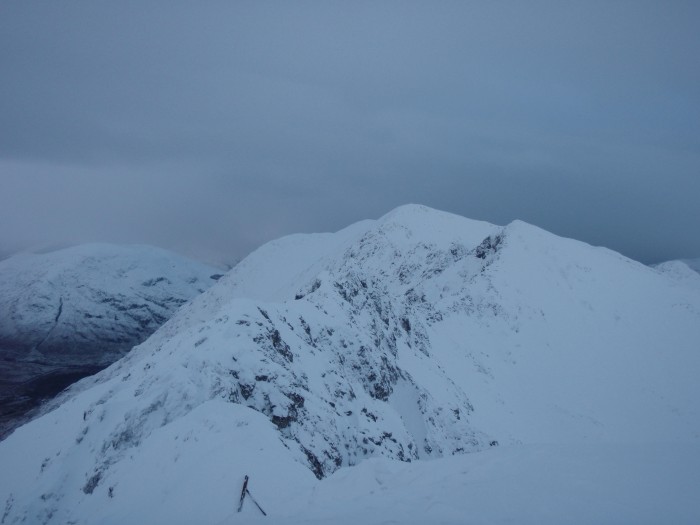 harry was leading the way, he is very experieced and no slouch speed wise either, he seems to glide up rock and ice with ease 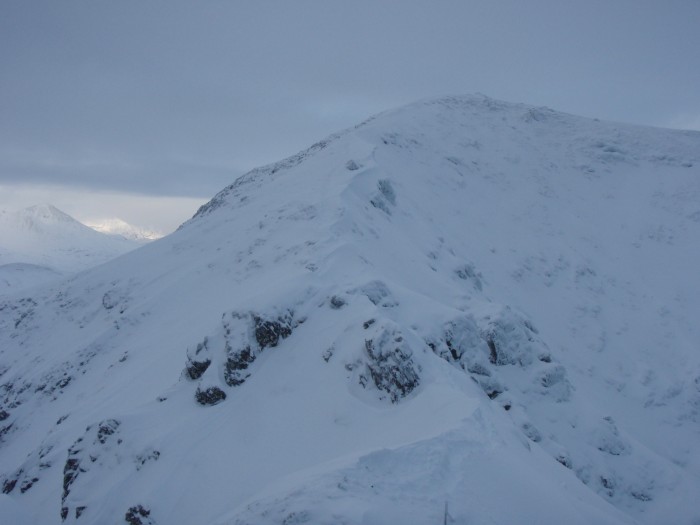 after meall dearg, things start to really hot up, lots of ascents and descents and of coarse the pinnicles, to make matters worse the clag came down and we had a few snow showers to contend with. 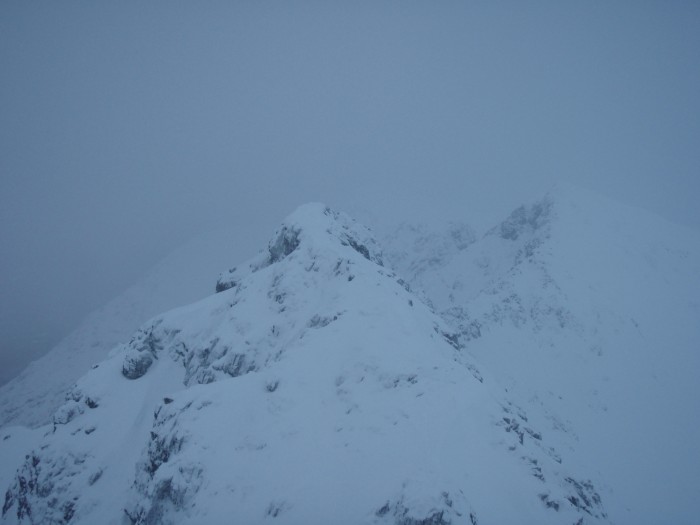 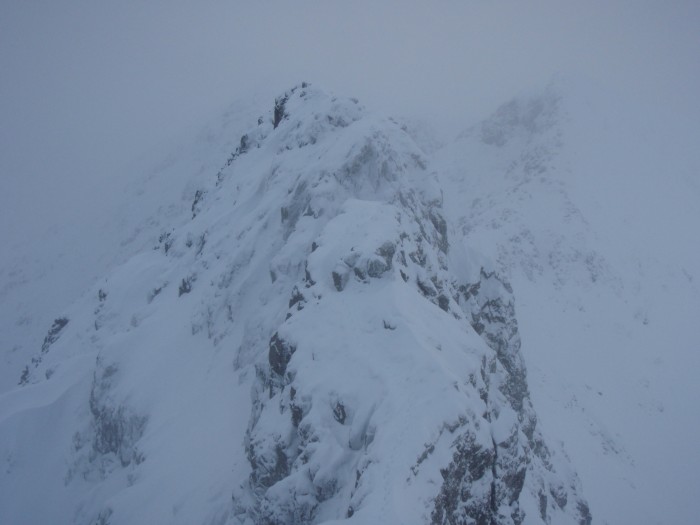 the ridge now becomes well definned, in some places no more then a few feet wide, and maybe the clag hid some of the exposure on either side. 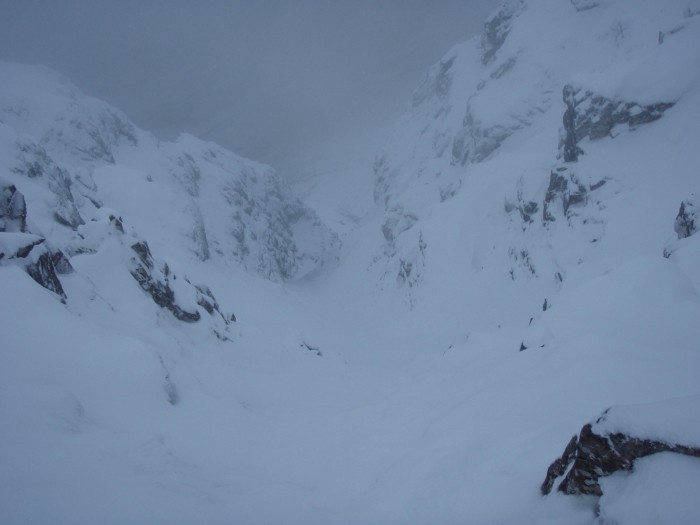 it was around here we met the couple who were in front, a man and wife couple from kinlochleven, we overtook them and broke the trail for them, wasnt long before the next tricky section, the pinnicles .ben is a rock climber and asked we get the rope out again, so out came the rope as we tackle a few tricky steps. 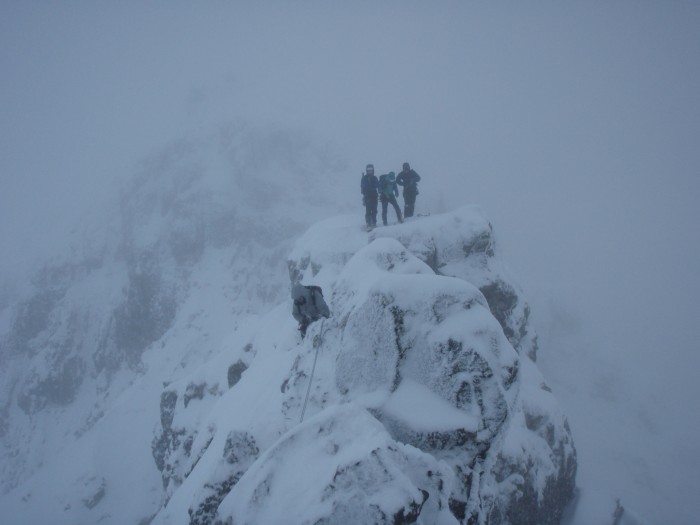 it seemed now to be quite challenging, the soft snow giving way and ice axe placements few and far between. downclimbing was especially difficult and another abseil was set up. 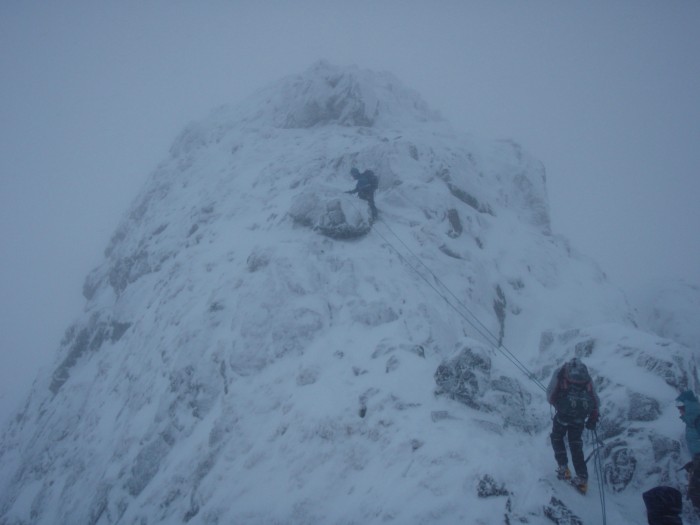 it was now full on, narrowing ridges, soft snow, steep climbs and harry like a mountain goat, makes it look so easy. the next bit was pure squeeky bum material, a difficult downclimb to a snow ledge a foot wide with a 10 metre steep ascent up soft snow and rock. i solo,ed it behind harry, ben and the lady ( who ha caught us up ) wanted the safety of the rope back up. 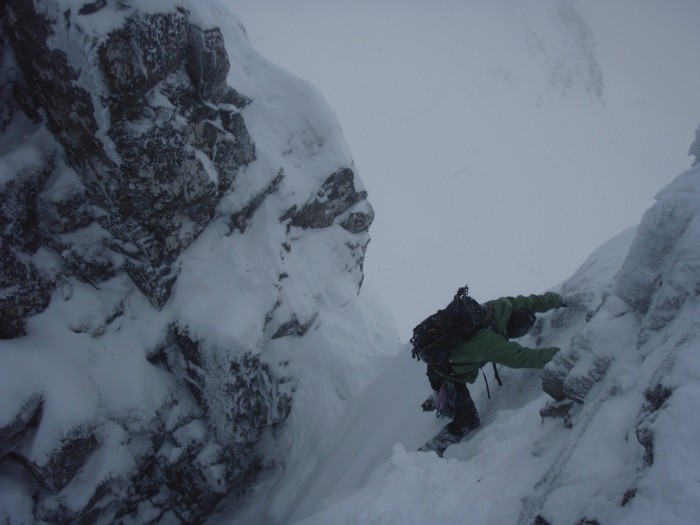 but it just kept coming, another pinniclem another ascent 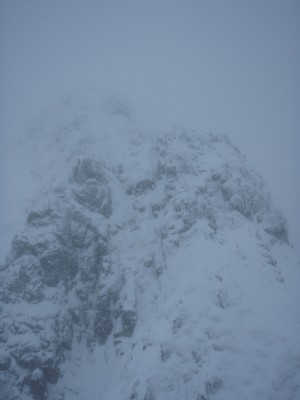 harry kept taking about a little arete he remembered, ah here it is he says as he dances over it, the rest of us taking care of feet placements and more slowly. 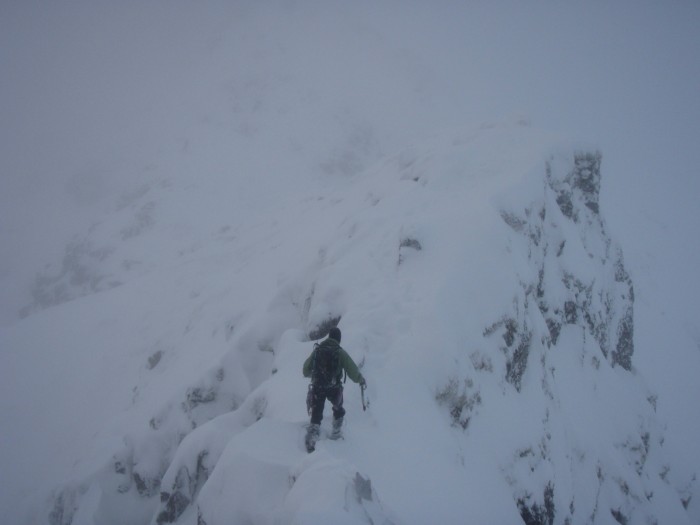 harry on the aret 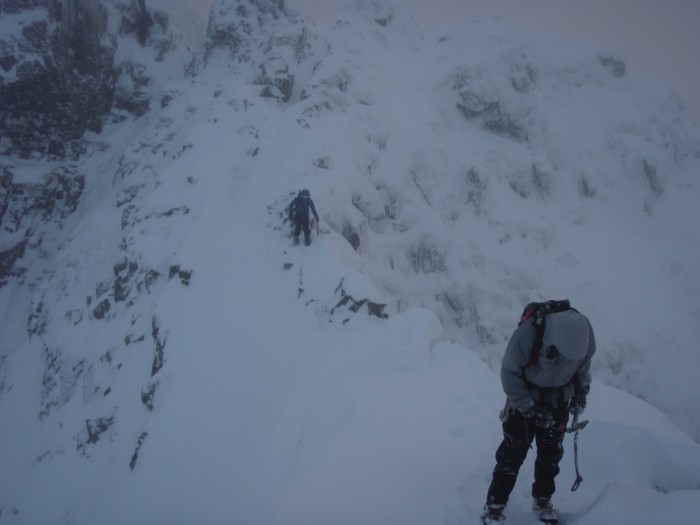 ben and burly on the arete

that was the hard stuff over and we soon reached stob coire leith, the snow was extremly deep here but we new the end was in sight, although we couldnt see it. we stopped at the coll before the final rise to sgorr nam fiannaidh for a drink. 200 odd metres of ascent later and we were on the summit. 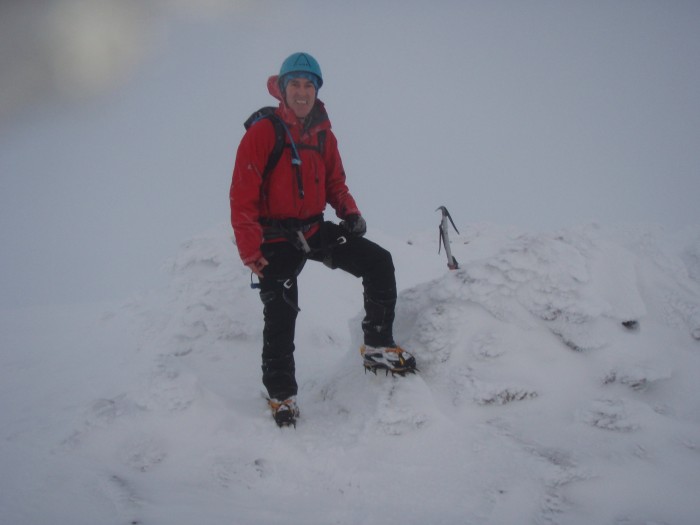 one contented chappie at the end 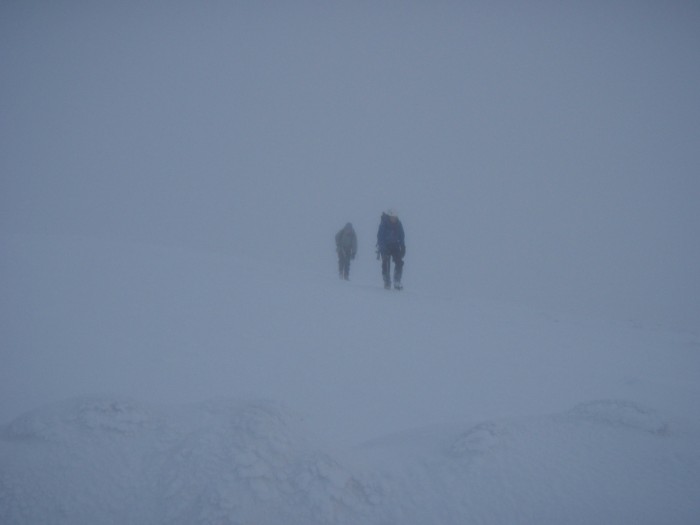 ben and burly aproaching the summit 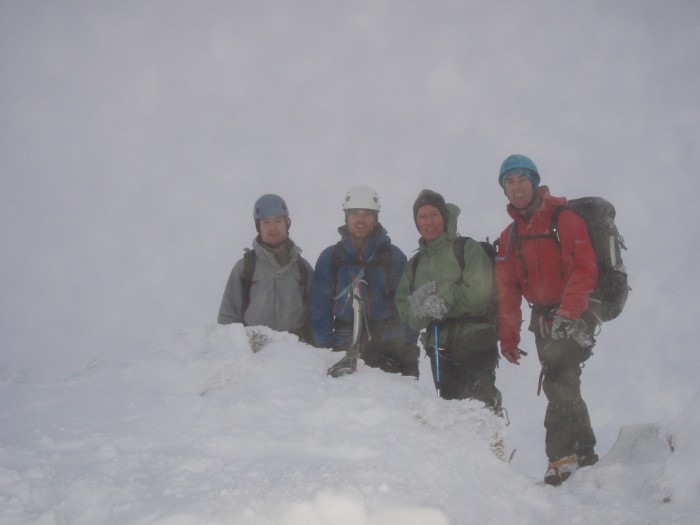 we descended straight of the summit in a southerly direction, taking care in the steep snow, there were enough rocks visable through the snow but care was needed as the slopes were very steep. in no time we were back at the car, just a tad over 7 hours, really good considering the conditions. it was one of my best days in the hills, the aonach eagach holds a special place for me, it reminds me of a friend i once walked and climbed with in glencoe, who sadly died in glencoe. i thought about him lots today, he probably brought the clag and snow showers in for me, he wouldnt have wanted it to be too easy!!

Sweaty palms just reading that - epic stuff and absolutely no way would I ever try anything like it !

Certainly a fitting way to remember your friend.

Was scared just reading and looking at the photos.

Would love to give that a shot one day but no way I'd attempt it just now!

Great report and well done! Something to aspire to, perhaps!? Sounds like you all made a great team with a good balance of experience

That blew my mind! Looks like heart thumping excitement. I would have LOVED to be out there with you. I'm a tad on the inexperienced side for such antics at the moment - for shame - but this report has really inspired me to keep getting out into the hills and pick up new skills!

Jaw dropping stuff, something I'll happily experience from the safety of my sofa

Go Ape was enough for me.
Thanks for posting

BRILLIANT!!! I so want to do that in the snow!!! Really enjoyed the pictures!! Its good to see what it is like...even though some of them left me with a feeling of OMG! Obviously I am already started thinking if I could do that solo in winter

But I guess I need to learn a few more skills before hand!

Great report and having done the AE in winter i do remember some of the more interesting moments.I went with a few experienced guys too and that made a big difference although i felt i slowed them down at times.Well done and whenever i drive on the glen good to look up and say i have done that

I'm thinking about braving that in the summer never mind in weather like that. Well done.

Brilliant MGMT,takes a big pair of b***s to do this under winter conditions.

Thats is , in equal measure, one of the most amazing and most horrifying reports have seen. I'm sitting here shaking and feeling sick on your behalf

Great report. I'm still sitting here making buttons.
That's the way to do it with experienced guys and all tooled up.
How were the other 2 you met geared up for the conditions.
A fitting tribute to your friend...well done.