Headed out to the Storehouse near Evanton with the missus for a late breakfast. She had lots of studying to do so I negotiated an hour away to bag a local Marilyn or two. The low Marilyns to the east of the Struie road are on my list of hills to cycle to, but somehow I hadn't got around to that yet. My initial plan was to head for the Struie itself, as this is the most impressive, and would appear to have good views over the Dornoch Firth. However once I turned off the A9, it became clear that the condition of the roads was much worse than I thought. As I eased down the steep hill towards the right-angle bend at Dalneich Bridge at about 5mph in first gear, I decided it would be prudent to go for the closest hill instead

our_route.gpx Open full screen  NB: Walkhighlands is not responsible for the accuracy of gpx files in users posts
I'd already used up almost half of my time driving the 8 or 9 miles to Stittenham, so I bolted up the forestry track towards the summit. The snow was deep on the track, so although a fastish walk was possible, running was out of the question. With the sun and blue skies, the forest was very pretty.

Start of the walk: 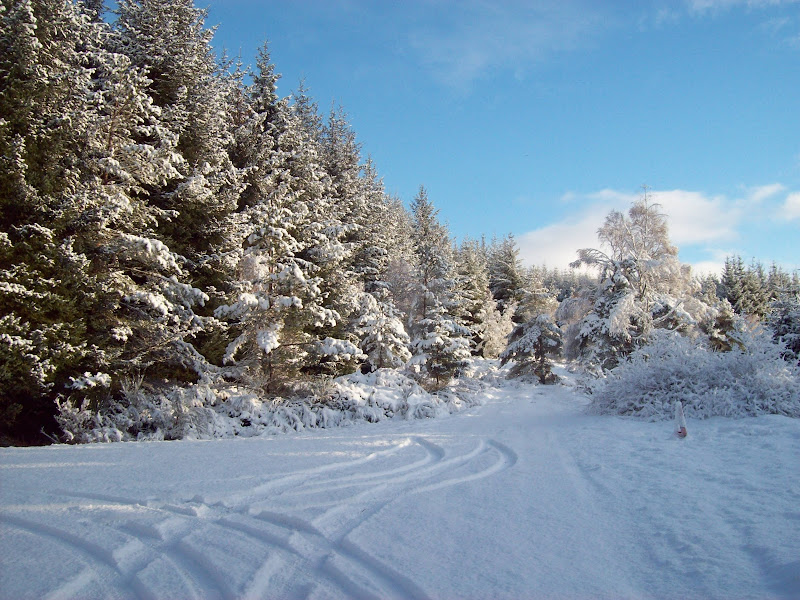 Looking across the Black Isle: 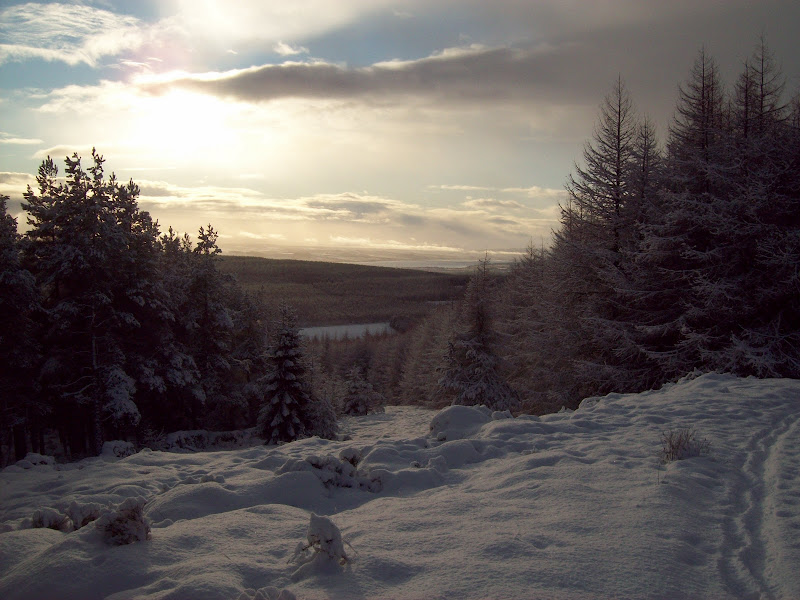 Eventually reaching the point where I had to leave the track to ascend the last 50m to the summit, I realised I was going to be late. I thought I'd make a phone call, but my phone wasn't in my pocket. I had either dropped it or left it in the car. I decided that since I would already be in for a bollocking, I might as well climb the last little bit and visit the summit anyway. This was much slower, plodding through knee deep soft snow atop heather, and disappointingly, the summit was surrounded in trees, meaning no views other than back towards Invergordon where I had been able to see lower down. There looked to be better views following the ridge westwards, but I didn't have time to plough a new path back down, and the weather was beginning to close in anyway.

Invergordon and the Cromarty Firth: 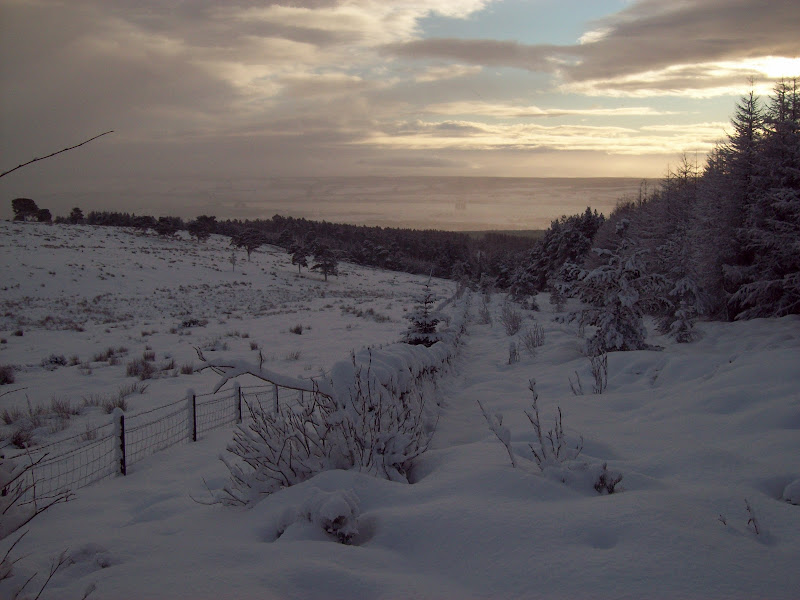 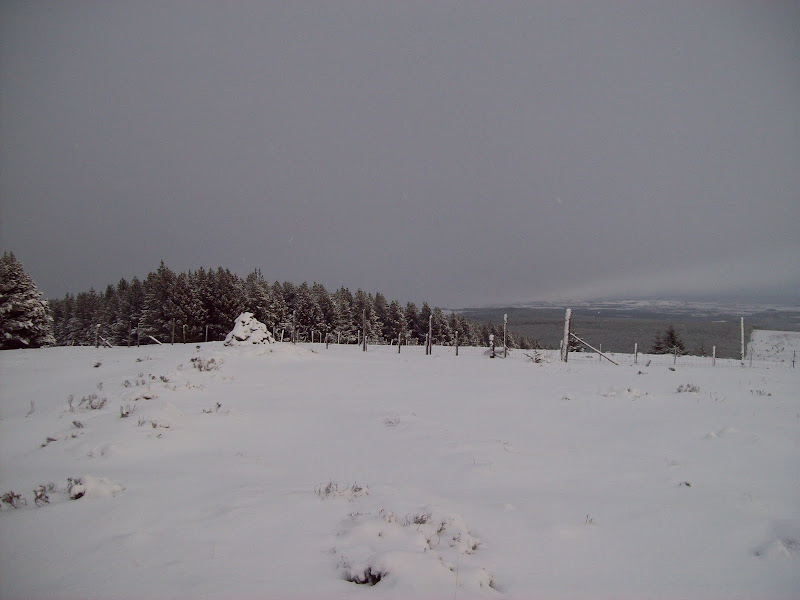 Cromarty Firth from the summit: 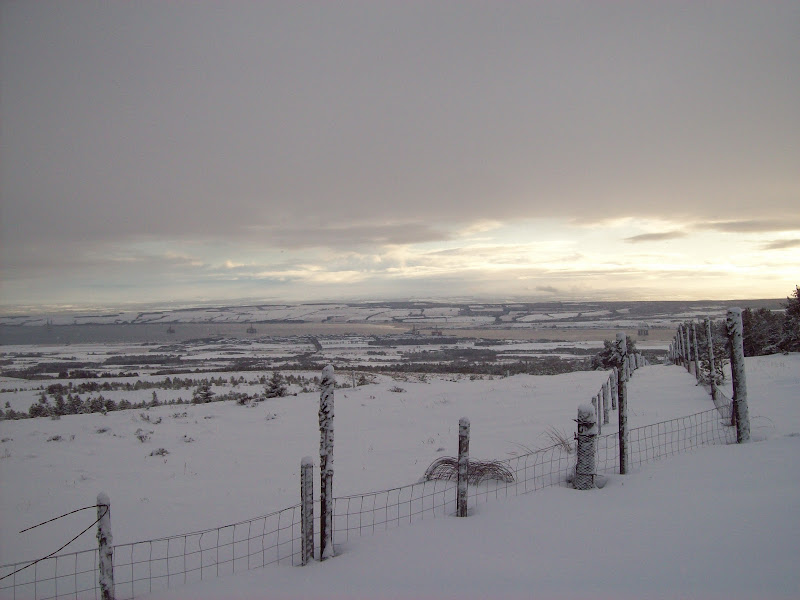 I retraced my steps, almost missing the forestry track as the snow was so deep (I did idly wonder why footprints went off to the right before realising they were mine!) No sign of my phone on the descent (although with the fresh snowfall I had little chance of spotting anything). Fortunately when I got back to the car, it was on the back seat, although with no signal, so I still couldn't phone and apologise. The car was nicely covered in snow now, and I had to do some interesting wheelspins to get it pointing downhill, at which point I was able to drive back to Alness at about 15 mph. By the time I got back to the Storehouse I was over an hour late (not bad when I was only supposed to be gone for an hour!) and got a fair ear bending for my troubles. Wish I'd gone for the Struie now - would've got some nice views for my pain

Weather turning on the descent: 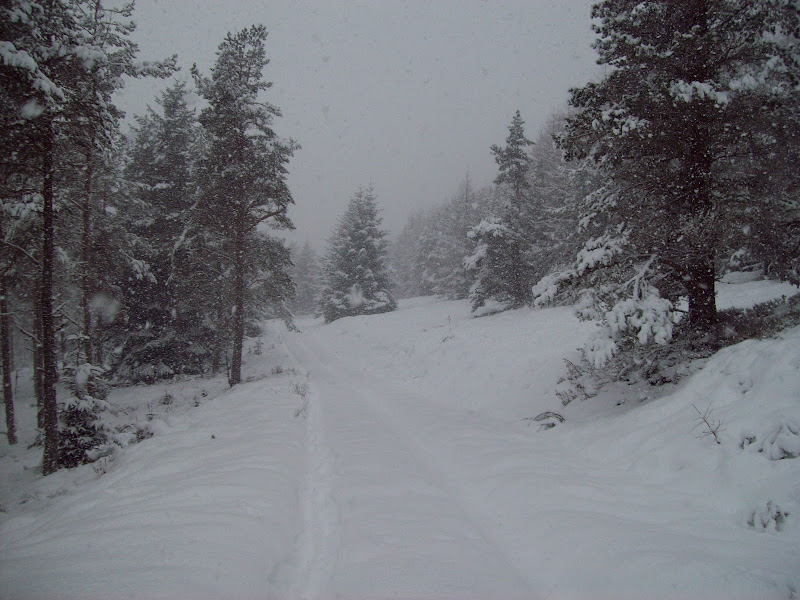 Drive back should be fun: 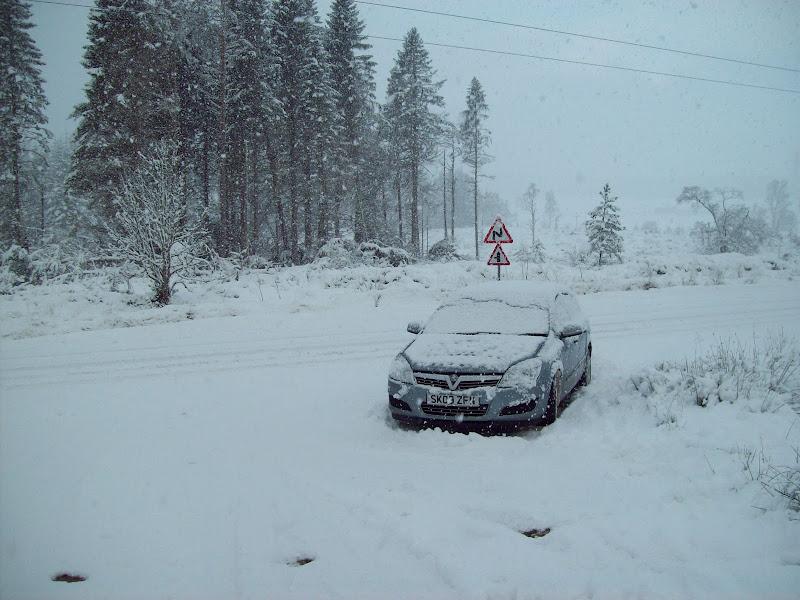 Looks a good hill for those conditions

Wouldnt have fancied trying to get the car out of that

and a withdrawal from the Bank of Wife.....

The city would tremble with the interest rate

I'm itching to get out after reading this!

You and others are responsible for major mental conflict as I've got so much going on just now I don't have time to get out walking apart from the usual dog walks!

Back in the motherland Malky

. Wonder how much snow will be left after this week

Nice one malky - bet it's good to be home for Christmas

Some nice views of the Cromarty Firth! My folks stay up this way and the last two years I've had nice snowy views of the firth are while driving up a far from snow free A9!

Cheers all, great to be back. Funny how much attention a slightly over-the-top report title attracts. Sorry if you were looking for an epic 30km crossing of Seana Bhraigh here