Wooow, at last, at last, a short break in that pre-Christmas madness. Since Sunday morning it's all been shopping, choosing gifts, wrapping, parcel-sending, baking Santa cookies, tree dressing and heaven only knows what else

Don't misunderstand me, I love Christmas, just hate all the preparations

So let's get back to my main subject: winter walking. We haven't had any opportunities to climb hills "in white" this year so far - either weather was rubbish or we had other duties and simply couldn't find time. So with the last weekend before X-mass looking promising, I started nagging my husband for a jaunt up a snowy mountain.
Carn na Caim and A'Bhuidheanach Bheag, the two "drive-up Munros" in Drumochter area became our first target. These hills don't look very impressive when seen from the other side of Drumochter passage so I've been saving them for a white day - and there was one.

our_route.gpx Open full screen  NB: Walkhighlands is not responsible for the accuracy of gpx files in users posts
I knew from earlier info exchange on the forum that Dooterbang will most likely be lurking somewhere up on these hills and I wondered if we happen to run into each other. When we left Beauly there wasn't a single flake of snow in sight but as we arrived at the big layby just past Dalwhinie, that's how everything changed: 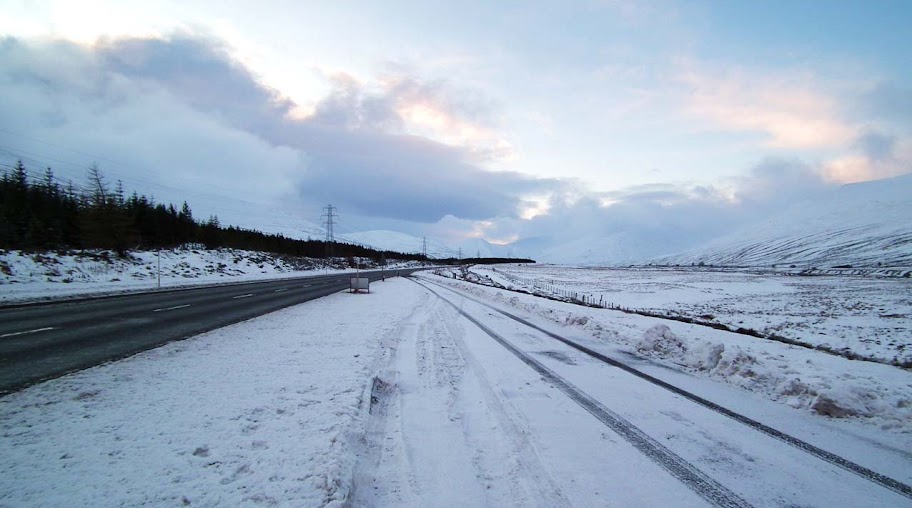 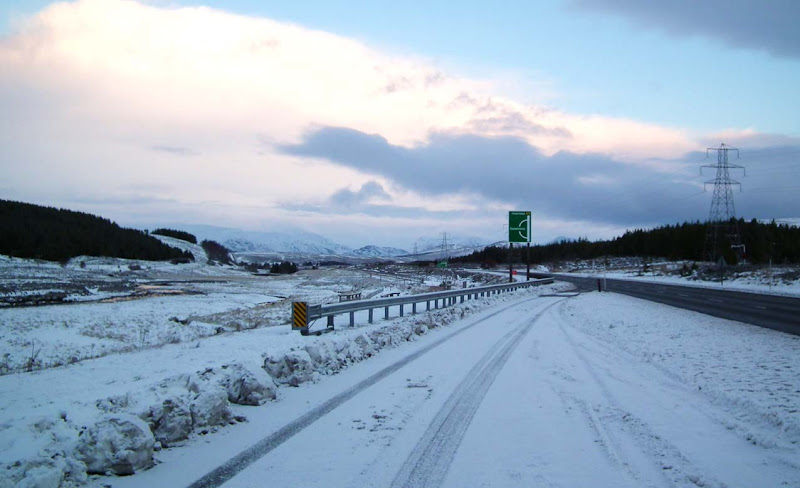 Getting ready for the adventure: 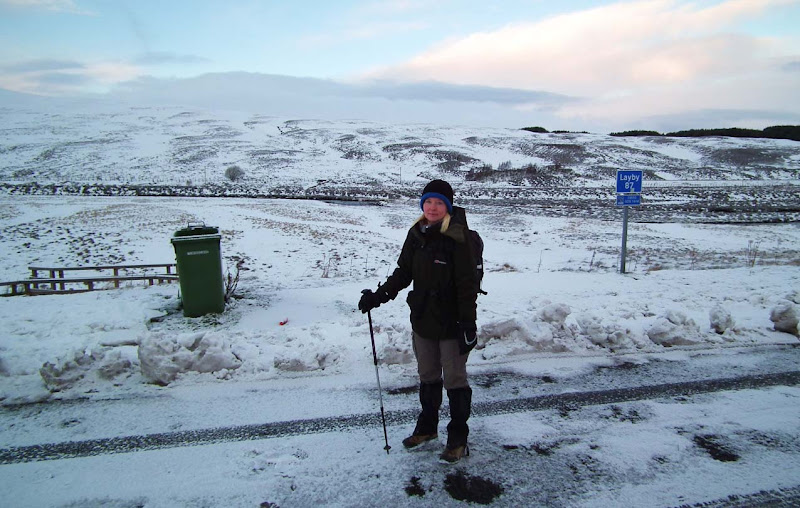 We crossed the A9 and walked through a gate onto a vehicle track which heads up to the disused quarry. Even though snow was quite deep the track was easy to spot. We began climbing the hill, laughing and joking, enjoying the winter wonderland...
The track still visible: 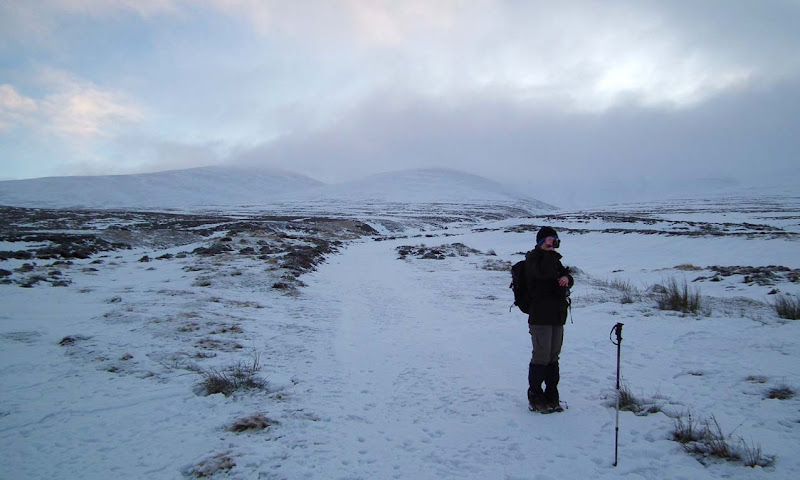 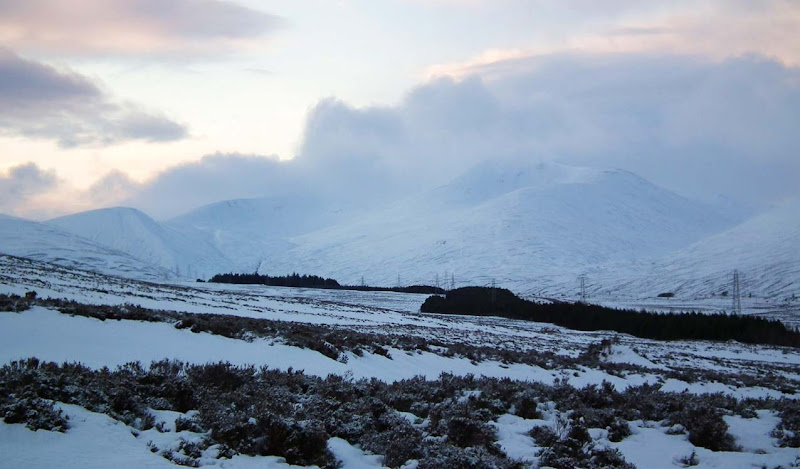 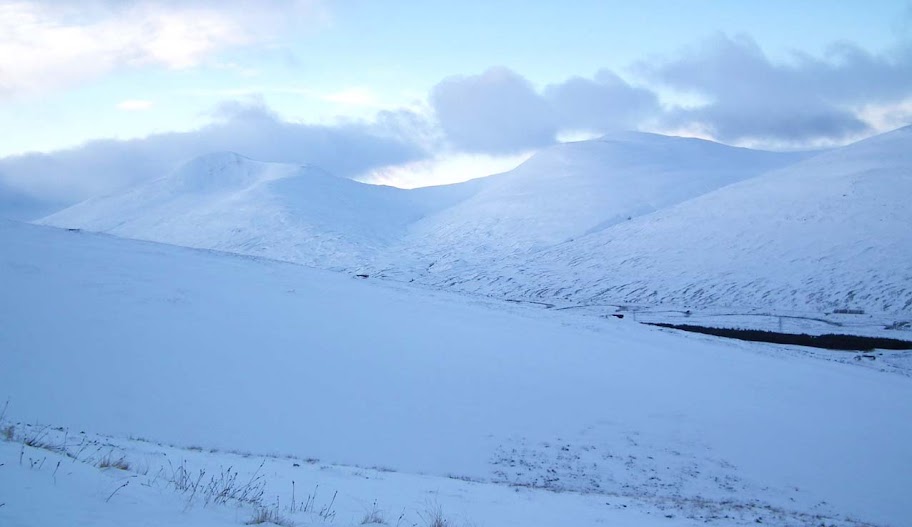 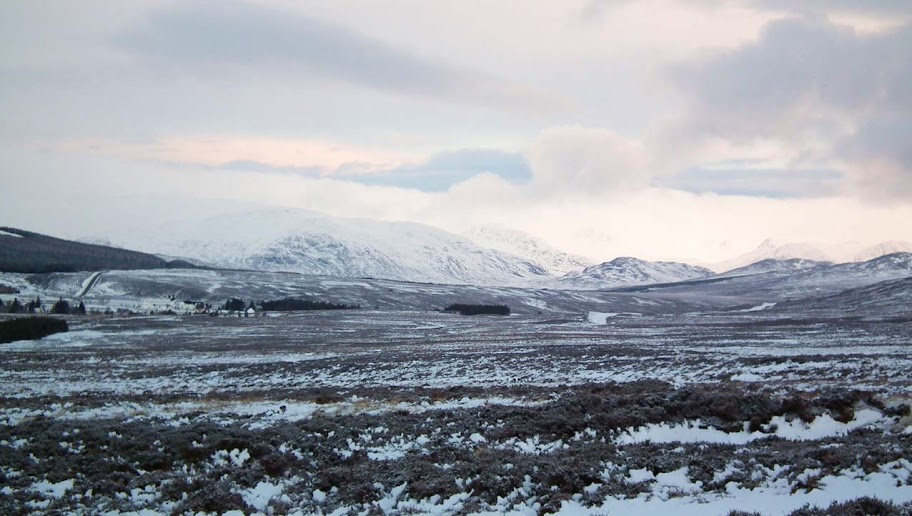 The view down to Drumochter passage and distant Cairngorms: 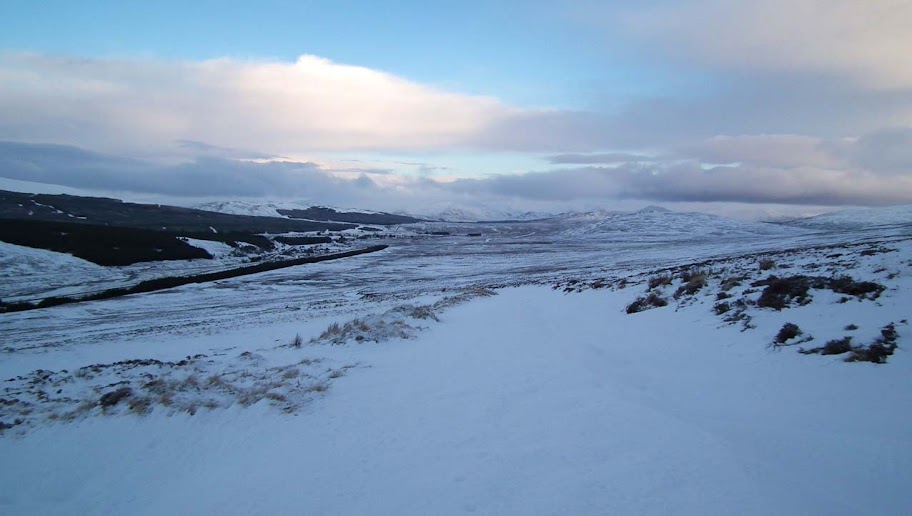 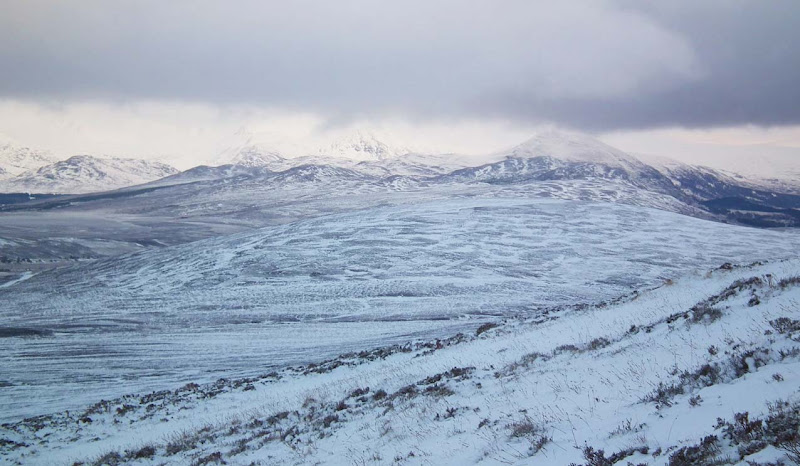 The summit plateau was covered in thick cloud and as we neared the quarry we started feeling a bit uneasy: 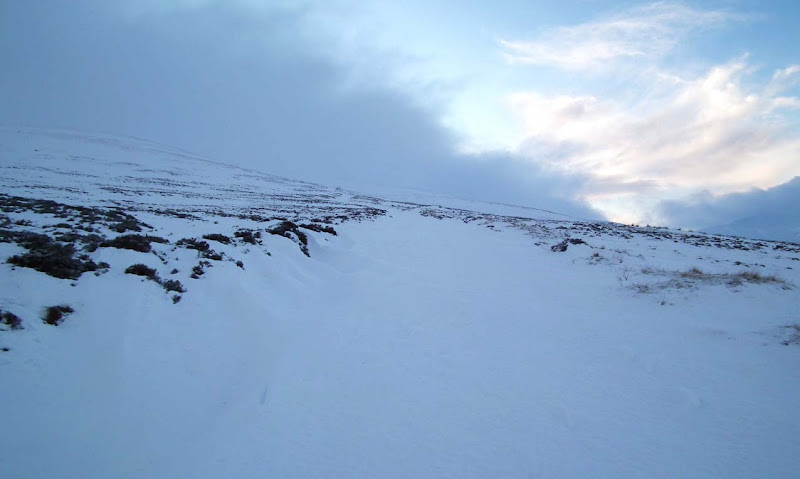 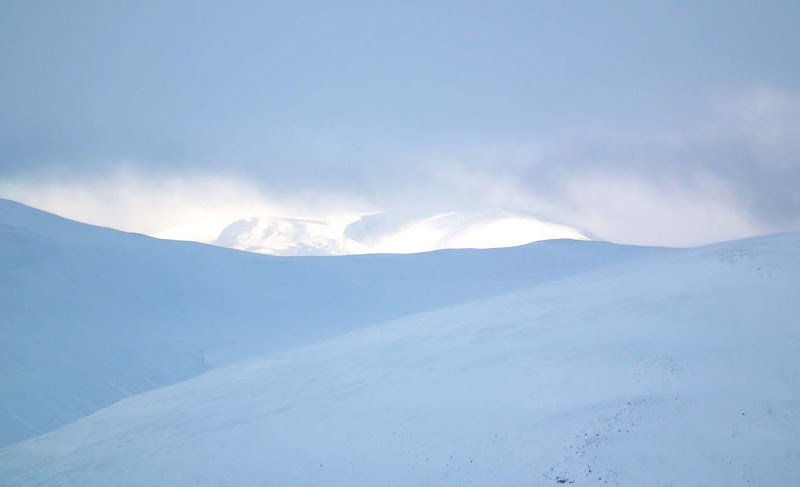 I was beginning to understand how difficult the navigation will be in such conditions: 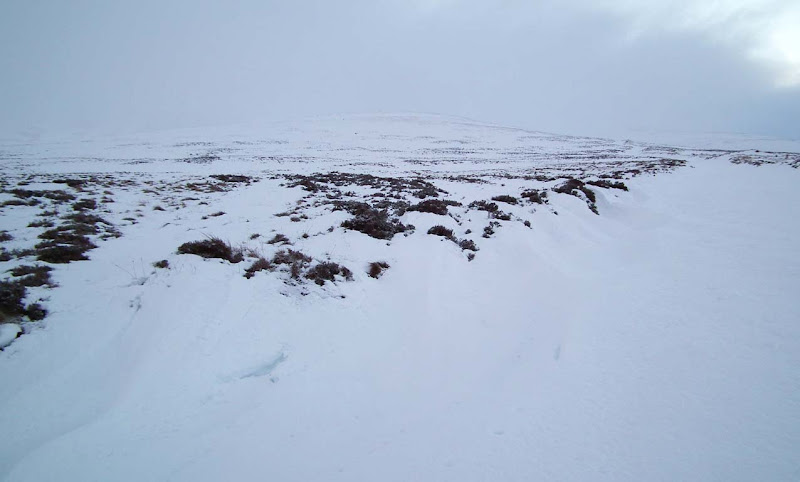 One last glimpse back before we dived into the cloud: 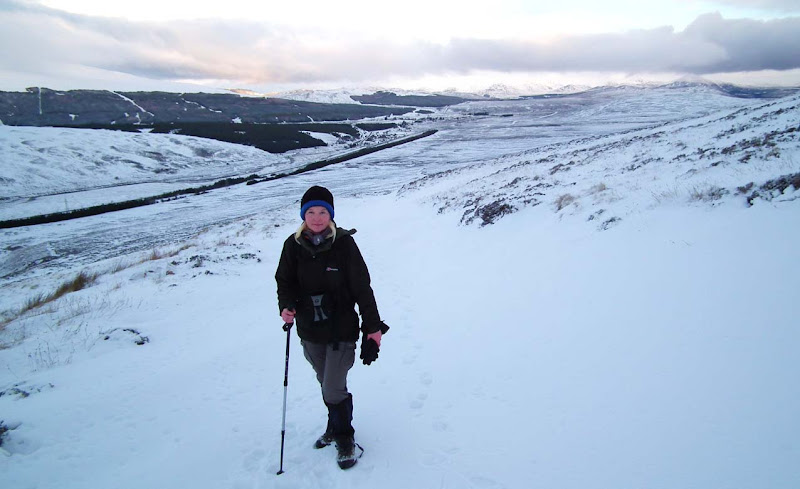 Once we lost the views it was all blind going, soon we also lost the confidence in where exactly we were. Somehow, after walking around the plateau near the quarry (which wasn't visible either) we managed to find a tiny cairn under the snow which, as we assumed by analyzing the map, was a 902m minor top just south of the quarry.
At this point Kevin concluded that it would be easier to go to A'Bhuidheanach Bheag first as it lies due south from the point where we were standing...
Somewhere on the summit plateau, not really sure where to go next 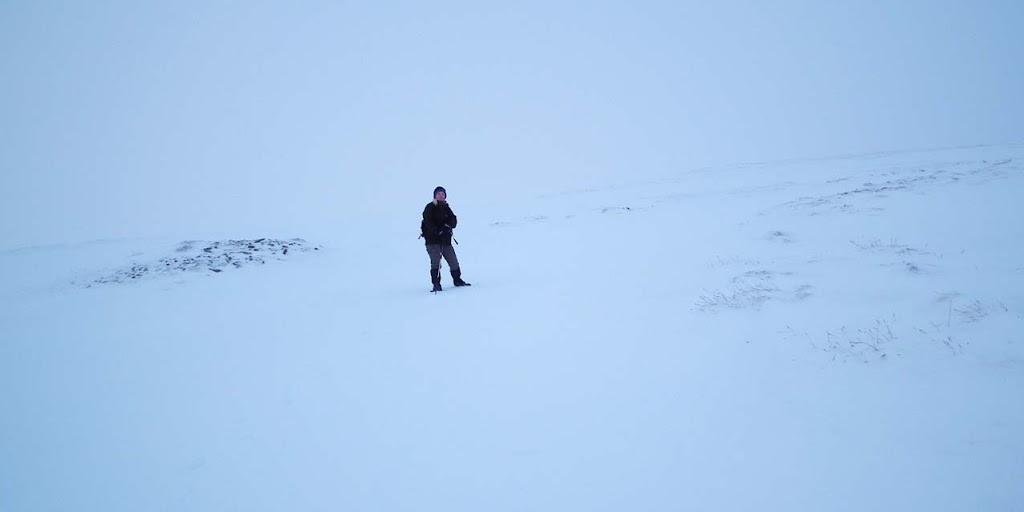 I still wasn't convinced if we'll we able to find the way in the conditions. These hills are completely featureless and navigation can really be a challenge even with map and compass.
Suddenly we saw three other walkers emerging from the mist. I waved to them and asked if they knew where they were going

We started chatting and decided to join forces to find the summit of A'Bhuidheanach Bheag.
It was a crazy walk and thank you guys for accompanying us! It was great to have met you.
Half way across the plateau, in a complete whiteout, we met Dooterbang and his band. It felt like a WH meeting up there! Shame about the weather otherwise we could have had a WH picnic 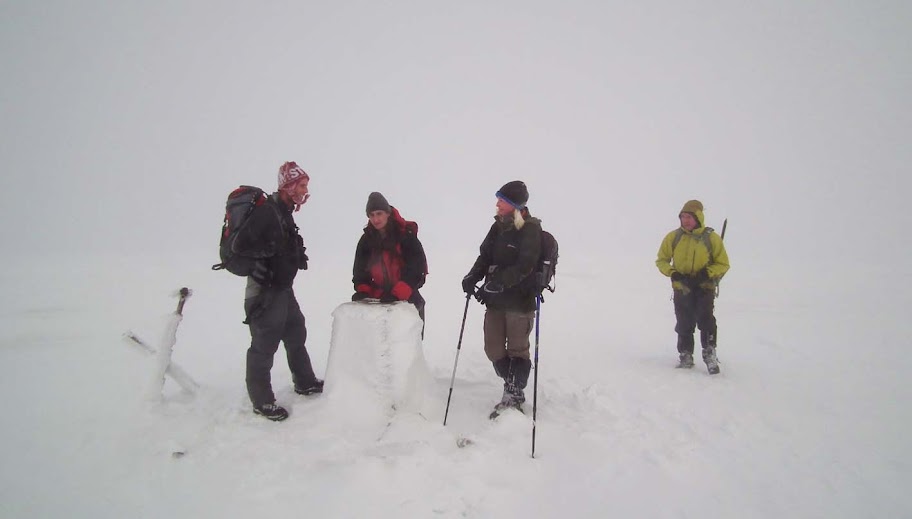 It was still relatively early and we calculated that we had enough time to bag the second Munro so though my lunch bun was stone-hard and I struggled to chew it, and water in my bottle was frozen, I was eager to continue.
Walking back across the plateau was harder than I expected. We pushed against the wind and soon it started snowing - we all looked like snowmen and I began to look around for polar bears

Just as we were maybe 1mile away from the summit of Carn na Caim, my husband who was the map holder, dropped the map - and it flew away with the speed of light! Chasing it proved to be pointless (too much soft snow). Luckily, the other Kevin was wise to take a picture of the map earlier on - so we could still navigate with gps and the picture displayed on the camera screen. We were on the second summit at 3:45 PM though I was falling behind a bit towards the end - sorry folks! My legs are too short and I struggled to get them out from the deep snow

By the summit cairn it was so cold that we just stroke a few poses and quickly began to walk back...
Black Panther transformed into snow leopard: 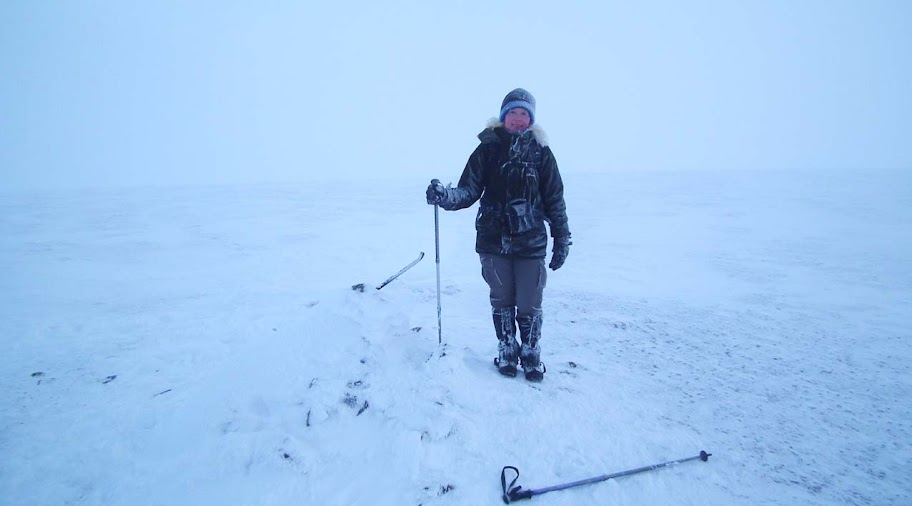 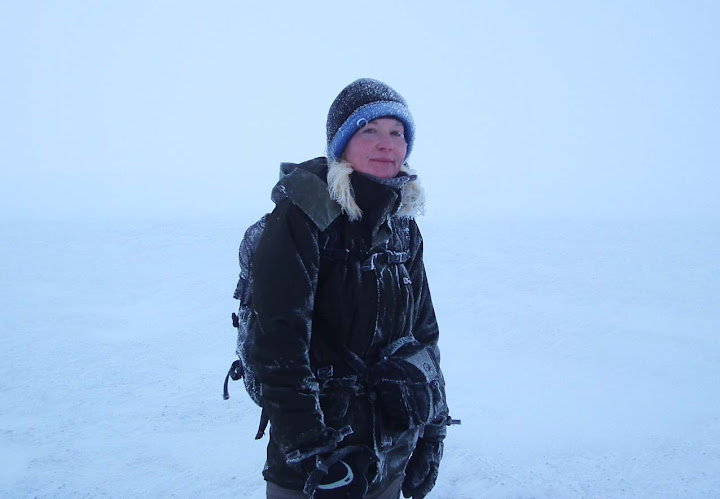 On the way back we decided to descend due west, instead of trying to find the quarry track. It was another wise decision as we didn't have much daylight left. Going straight down Coire Uilleim saved us both time and distance. 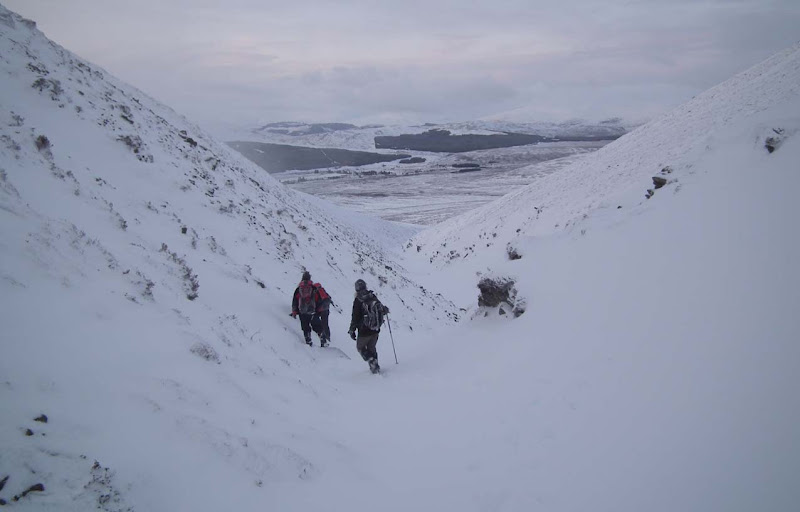 One more glimpse back up the gully, to the unfriendly frozen world we left behind: 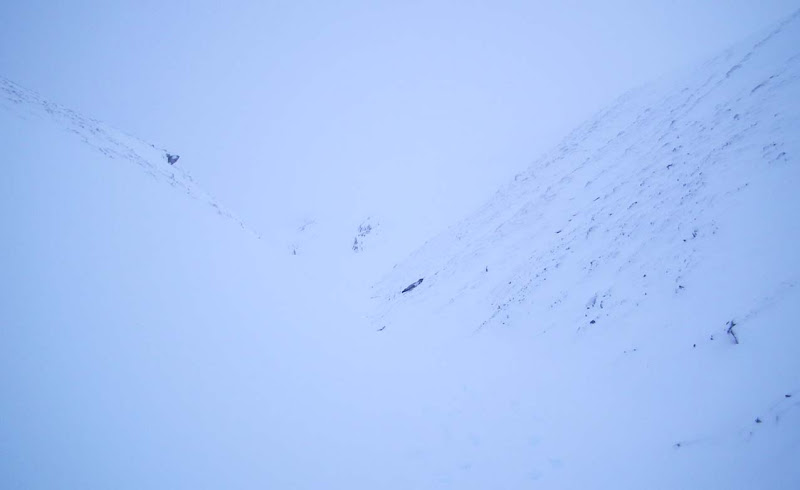 The descent down the corrie was relatively easy with maybe too much snow in places and a few cornices to avoid, but most of the time it was fun and eventually we could see something more than white-milkness: 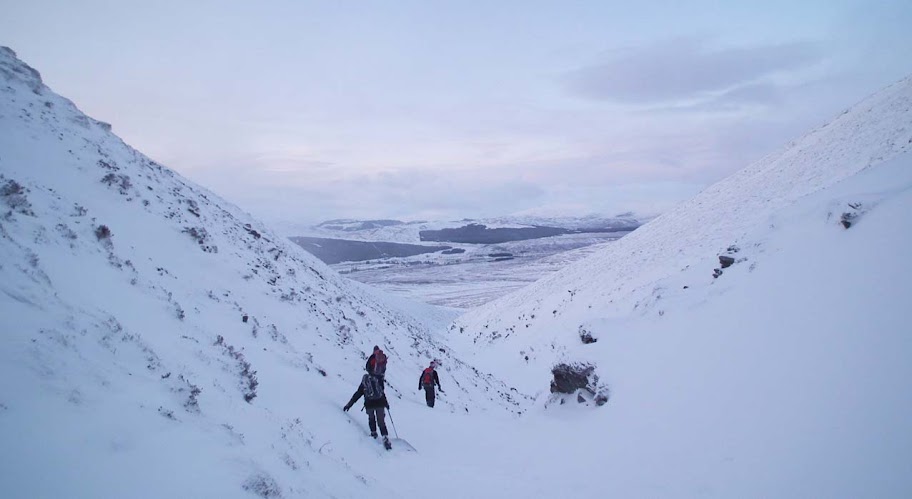 Soon we were out of trouble and back into winter wonderland: 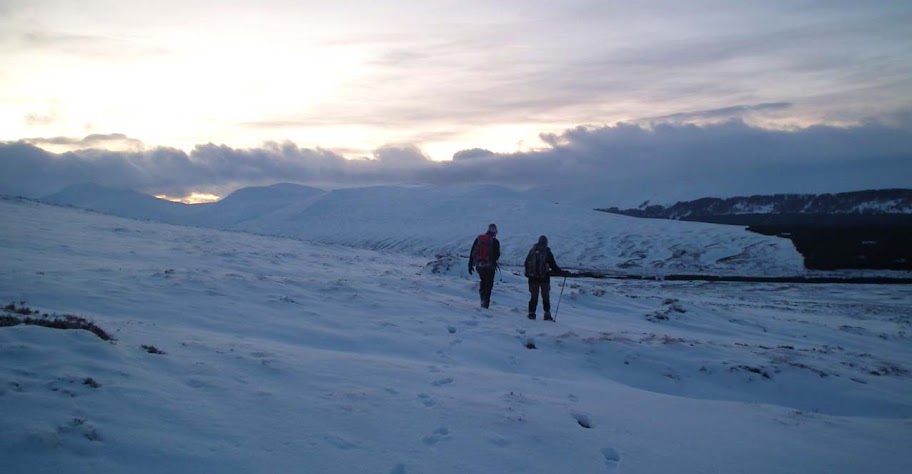 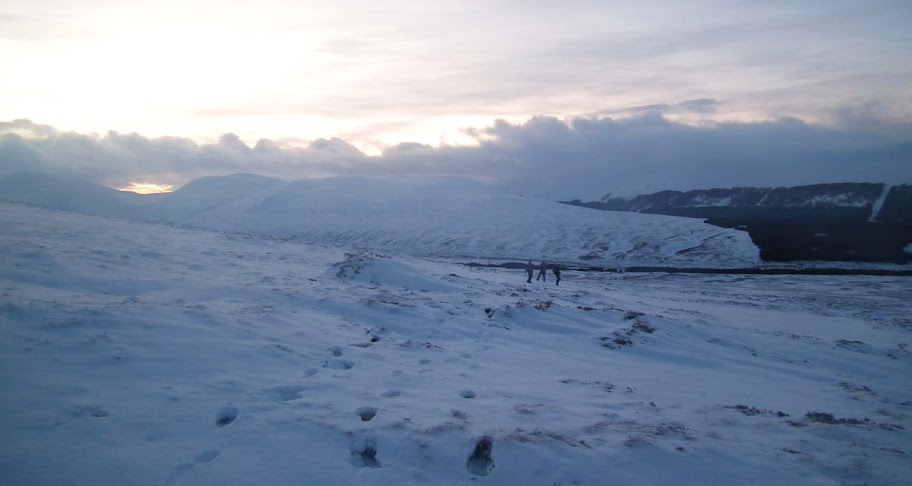 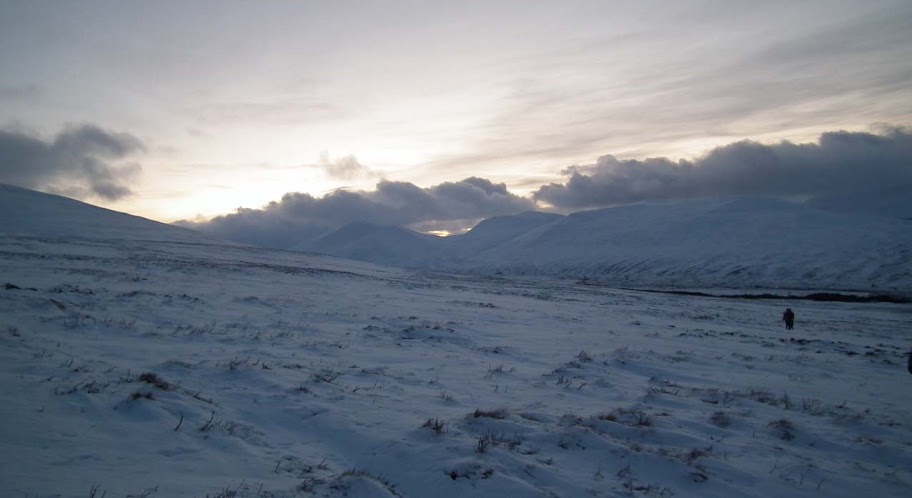 The last minutes of daylight with some wonderful scenery around: 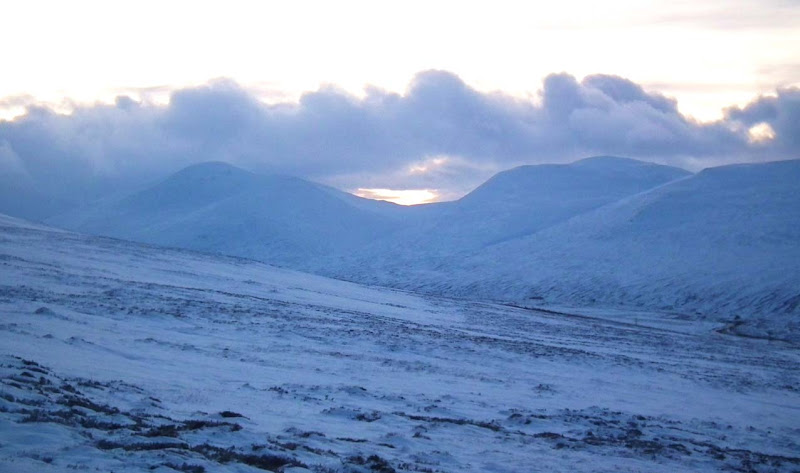 We got back to the car park just about in time. My hair was frozen and I had icy mascara on my eyelashes but apart from that I was still OK and in one piece

Summing up, it was a great, great day - no views from the summits but a fantastic adventure and we met some nice people

One of the most boring Munros gave me a good story to write about. Meow!

well done BP and pals - definitely nicer in the snow

certainly hard to navigate up there when the track runs out - had similar problems in the clag - and the wind can be very strong with no cover !

nice report and well done on the navigating in the conditions,

i cycled these a wee while ago and i now wish i had kept them for winter,looks so much better up there with a covering of snow

Well done the snowy stuff is harder than it looks. I have these to do yet & will do in the snow also

Well done on bagging the 2

It was very cold on Saturday, you'll had been fine with your leopard skin eh

Nice to see you manged some photos also as wasnt a day for having the camera out.

Nice two these despite their reputation, cheers for sharing

Lovely report and great story of an eventful fun day-out. Just goes to show you when things like maps just blow away! I once lost an over-mitt that just disappeared into nowhere just as I was needing it more than ever. Anyway, thanks for fine read and pics, cool that you met the other guys ....

Looks like you had a great day out with lots to keep you on your toes.
Photos are fab, and you get to make new friends.
You did well cos you look like you were really cold !

Good you met those WH guys when you did. I always think if there's difficulty navigating it's more reassuring to be in a group.

I gave up on these two when i first attempted them in similar weather to yourselves as at the time i was a novice so well done in continuing in the conditions. The winter is definately the time to climd this pair.