In March 2008, I’d just got back from the Aviemore area where I’d finally managed to acquire a sledge suitable for adult use (you can only buy kiddies ones in England I think) – I’d been after one for years! I was off on a trip to the Lakes with my friend Richard and, as it had been snowing a bit at home, decided to take it on the off chance as I have had a burning desire for quite some time to sledge a great 2000 foot slope down the back of Skiddaw!

I decided that it wasn’t worth going up Skiddaw as it’s a long climb if ‘my slope’ wasn’t in condition so we decided to go up Blencathra. Richard couldn’t believe I was willing to cart a sledge up Blencathra but the new plastic ones are very light. The only trouble I had was that it was very windy and that meant I had to watch I didn’t get blown over crags as the sledge acted like a sail when you carried it under your arm.

We parked under Mousethwaite Col and set off up the non-snowy lower slopes, getting funny looks from other walkers as it was a weekend so there were plenty around. Richard told me not to be so silly and hide the sledge under the hedge until we got back down but I refused (think he was feeling severely embarrassed to be walking with such a big kid!)

Now Richard is definitely a reluctant winter walker and hates snowy mountains so I decided I’d best take him the easy way up the back of Blencathra from the Glenderaterra col and break him in gently, or I’d just have a revolt on my hands and he’d go back down. This worked a treat! There was a little hesitation on the col when he saw the snowy slopes heading off towards the top of Foule Crag (the top of Sharp Edge) but he plodded on. We were soon at the top of Foule Crag (I had a little short sledge down the first bit of snow we got to as I hadn’t been on a sledge for years – the new plastic sledges go like a bomb!)

We then plodded across the snowy saddle and up the back of the summit. This area was “wick wi’ snow” as we’d say in Yorkshire and very hard frozen so I decided this was the ideal spot as, with it being a saddle, you had an uphill bit before you flew over Foule Crag and a few hundred feet to your death! I was assuming the sledge would stop somewhere in the dip!

At the summit Richard again asked me not to be so silly as to sledge on top of a mountain but I said I was going to so he said he was off back down again to the pub! I had a quick look at the Scales Fell descent and it looked okay for an uncramponed bloke so I gave him instructions as to the route and to stamp his feet well and he set off down.

I lined the sledge up for the iced over tarn below me in the middle of the saddle, hoped I could keep it straight and not plunge over the eastern crags, hoped again I would stop before taking off over the northern crags, sat down, put my feet up and tore off down the slope! The sledge seemed to be going at a terrific rate and I couldn’t see a thing due to the ice crystals hitting my face. I could see the odd astonished walker to the side though as I sped past them shrieking half with fear and half with exhilaration. Just before the tarn I slowed to a halt, nicely in the middle of the saddle – great fun!

I must have had about 20 runs before I was totally exhausted by plodding back up the slope (it was quite a way) – there was only once when I ended up heading east but stopping before the crags over Scales Tarn. Lots of people looked really jealous and said it looked great fun – I said it was! Then some kids turned up with their parents and said ‘awww - cool sledge’ so I decided to let them borrow it while I had a rest (looking to their parents for approval – they didn’t seem at all interested). I instructed the kids that on no account must they go towards the eastern edge, to try to head for the icy tarn and preferably not go left off the saddle. What did they do? Went left and I didn’t see them for another half hour while they plodded most of the way back up the mountain – parents still looked totally unconcerned! I wouldn’t mind but I was getting cold by then plus they never even thanked me!

I set off back down Scales Fell on Richard’s route and absolutely everyone who passed me in either direction stopped and asked me what it was like for sledging – I said great! So you never know, maybe soon there’ll be loads of walkers on Blencathra in winter carrying ice axes, crampons and sledges!

(Unfortunately, no pics of me actually sledging as of course my companion had buggered off in disgust!) Our ascent was up the gentle snow ridge in the distance 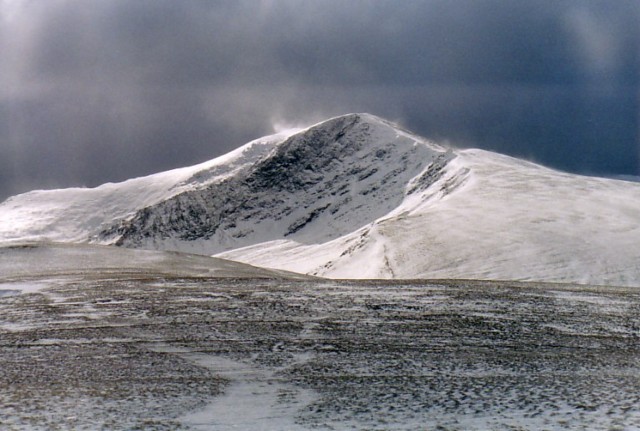