Beinn Lora - a great wee walk in any weather.

Beinn Lora - a great wee walk in any weather.


I’m surprised that none of the WalkHighlands regulars haven’t already filed a report for this walk – it’s great.

I hadn’t been out walking for a month or so and decided to tackle Beinn Lora. It’s been on my hit list for a while and thought since the days are so short and the weather so poor this was an ideal quickie outing which would keep me below the cloud base.

Route guidance from the web site was pretty spot on. However there were loads of fallen trees due to recent storms and the way was barred in several places. I say barred – I mean the trail offered excellent scrambling over wood rather than rocks! 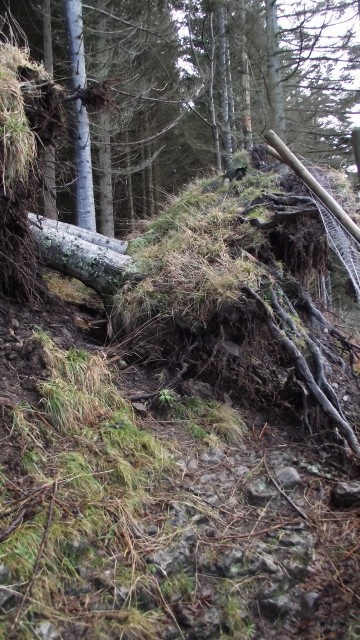 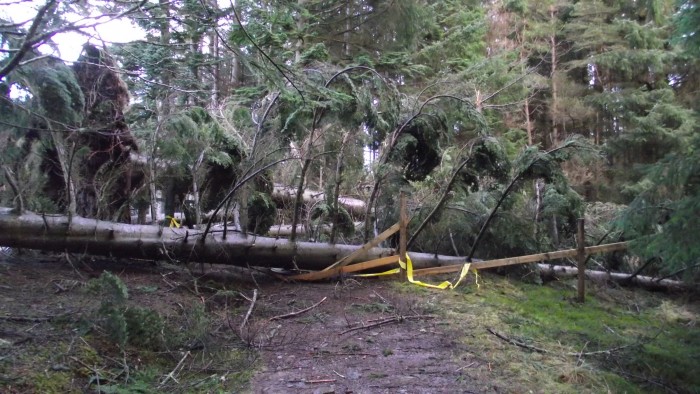 The first two thirds of the route up took me through commercial pine forest. Normally I’m not crazy about such places but this was quite pretty. Almost immediately there were glimpses of really good views through the trees across the Firth of Lorn towards Mull. 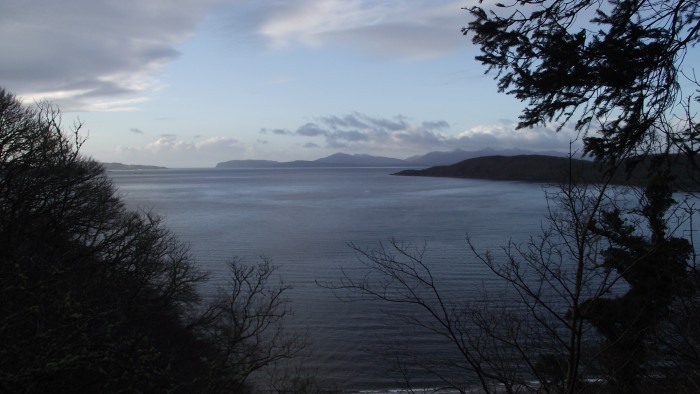 When I emerged from the forest the views were great although in the distance low cloud and mist obscured the view of Mull somewhat. 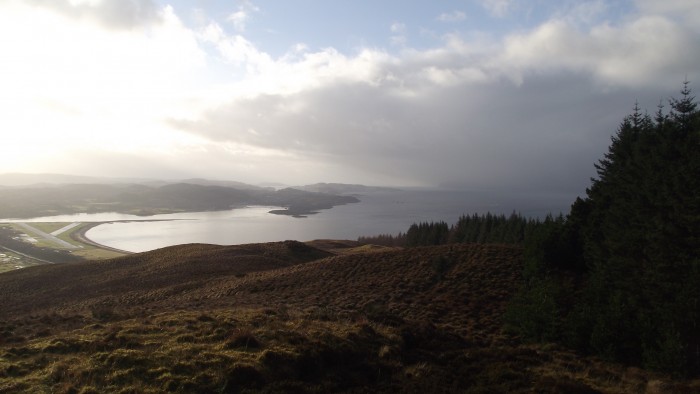 You can see Connel airfield to the left of this pic.

At the actual summit the all round vista was marvellous and included everything described in the web site and more. 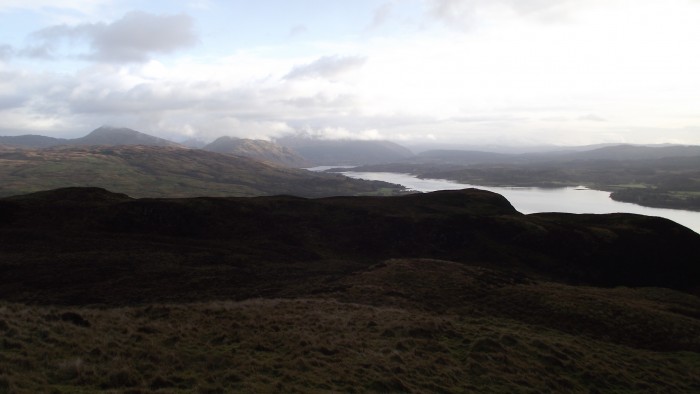 looking back up Loch Etive - Ben Cruachan is in those clouds somewhere! 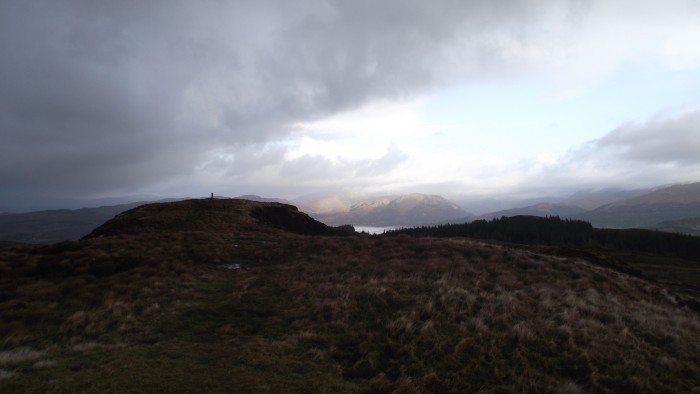 Back towards the summit and a wee glimpse of Loch Creran.

After only two minutes at the top the bad weather I’d seen over Mull suddenly arrived on Beinn Lora. Gale force wind and very painful hailstones lasted about five or ten minutes then disappeared as suddenly as they’d arrived.
On the return I took the wee detour to the “Eagle's Eyrie” viewpoint. (No eagles and it didn’t seem very eerie) The detour takes only three minutes and again the view was great – north over Loch Creran towards Ardgour and northwest across Lismore and Loch Linnhe to Morvern. 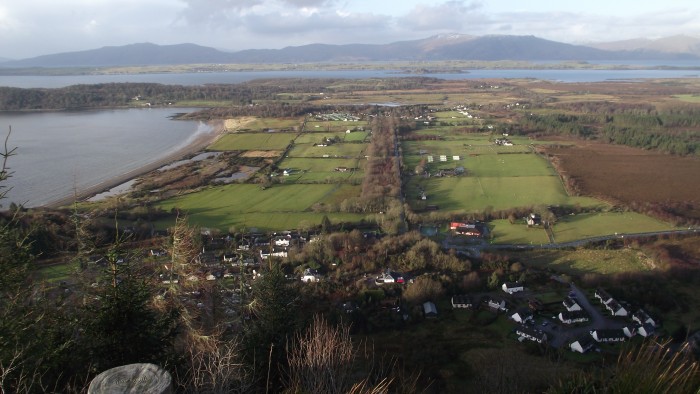 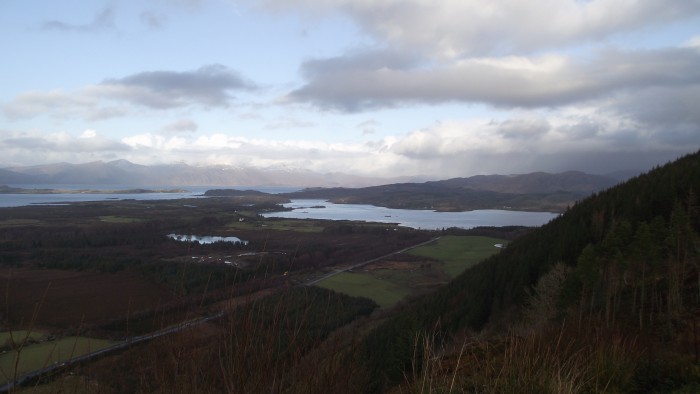 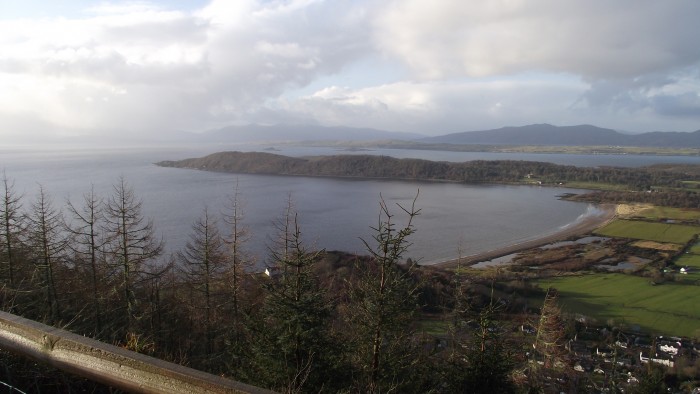 For any budding divers amongst you this is Ardmucknish Bay. 25 metres below the surface lies the wreck of the SS BREDA – sunk by German Heinkel bombers during World War II. Included in the cargo were two race horses belonging to the Aga Khan which managed to swim to safety on the north shore of the bay. Check this link http://www.youtube.com/watch?v=hMP9J703jW8&feature=player_embedded#!

All in it took exactly two hours, including fifteen minutes at the view point. I didn’t have time for any treats afterwards otherwise it would have been worth the short detour to go to the Holly Tree at Kentallen.
A very nice afternoon out which I would highly recommend.
Alastair

Enjoyed this walk a few months back.
It is a great wee hill, with excellent views.

Wahay! This is my local hill, my dad has walked three generations of our dogs up there every morning for the past 25 years.

Later I took up the habit and started pushing/riding my mountain bike to the top of the forest track. The complete, no stops ascent always eluded me though as there was always one 'crux' I couldn't get up without wheel spinning or losing the front end.

In the trees you'll find countless downhill mountainbike trails, these have kept two generations of local kids entertained and probably accounts for the highest ratio of downhill mountainbikers to old age pensioners in any village on the west coast (one of whom still regularly races on the world cup circuit, Ben Cathro). The trails are all in various states of repair and some will have suffered horrendously with the windfall, but for anyone who fancies getting the heart going they make for interesting, if steep and muddy, diversions.

Building some of these trails took up much of my time when I was a teenager. Instead of going out and learning to drive/drink/meet women (the latter two were a bit tricky in Benderloch, nae pub!) I was up in the forest cutting and placing fallen trees to support the thin and greasy trails we would then skite down. Sometimes my imagination exceeded my skill and one of the best trails I'd ever built was quickly left to go fallow after we all realised it was an absolute nightmare to ride... There's still a hatchet and sledgehammer of mine buried in the leaf litter up there somewhere!

There are plans afoot to clear fell much of the forestry in the new year. While I doubt it will spoil the hill too much (there will still be stands of trees left untouched, and thankfully there have always been areas of non-commercial forest) it might make a bit of a mess of the paths for the next wee while, so if you're planning on visiting I would suggest doing it sooner rather than later!

Did this last saturday. Great views from the top