Perfect day for this walk - clear, bright, crisp, mainly dry, not much wind, and I'm told I officially became a mountaineer (due to needing ice axe; managed without crampons but did wear snow/ice grips although they kept falling off!) steep steps to start with, not much snow on lower ground Straightforward climb to the top of Stob Coire Raineach, only passing smaller patches of snow on the way Not sure who won the debate about whether Stob Coire Raineach should be classified as a Munro, since it was discovered later and not on the original list of Hugh Munro - guess it depends on your definition of a Munro, as in based on height vs discovered by the man himself 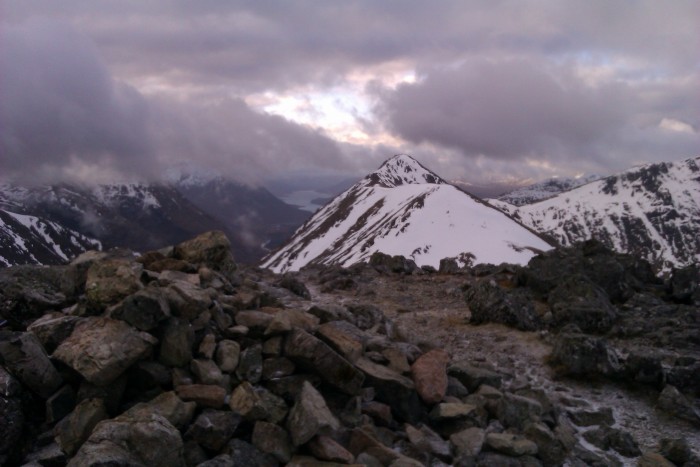 looking across to Stob Dubh from Stob Coire Raineach

The climb up Stob Dubh was a little trickier.. could have used crampons, but snow/ice was still in patches so I went with the little velcro grips I bought last week. Seemed like a good plan, but they did keep falling off as they're only fairly thin strips with a single strap around the top of the boot. Still, I didn't fall any more than usual heading up to ridge over Stob Dubh Walked along to the further view point, but clouds were coming in so didn't get great views. On the way back down, the quickest way was to slide.. so I got in some more self arrest practice and giggled like a kid all the way down slid back down wheeee :)

Re: Mountaineering at Buachaille Etive Beag

Re: Mountaineering at Buachaille Etive Beag