our_route.gpx Open full screen  NB: Walkhighlands is not responsible for the accuracy of gpx files in users posts
I had read a couple of nice reports from these hills so with only a small window of decent weather forecast I made an early start and was parked up at NS 310987 for 0800 . Walking towards Invergroin Farm I was met with this festive , if slightly bizzare scene : Just past the farm and across a cattlegrid a gap in the fence allows access to the hill and the long slog up the SE ridge of Tullich Hill . My last day out had been on an ill-fated expedition to Beinn Bhreac-liath when five of us were blown backwards off the hill by a screaming gale . Three days later and here I was wandering up a hill in the dark in flat calm , down to a T-shirt and overheating , what a change ! As I climbed the sky slowly lightened and the views opened up . As I reached the summit of Tullich Hill the sun started to break through the low cloud ,with great views of the Alps to the north and Loch Lomond to the south . 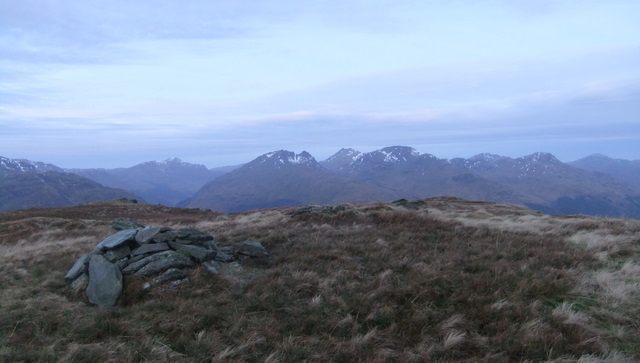 From Tullich hill I headed NE , descending through crags to reach the bealach at An t-Sreang , losing a lot of height which would have to regained on the short and steep climb up to Ben Reoch . From the bealach a line of iron fenceposts leads uphill through the crags towards the summit . Arrochar from descent to bealach Looking back to Tullich Hill The cairn is a great vantage point, looking south along the ridge to Beinn Bhreac, east to Ben Lomond and north along the loch to the munros around Crianlarich . 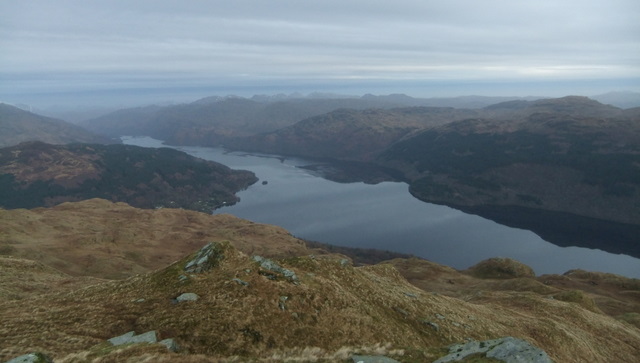 
The route to Beinn Bhreac is straightforward but crosses through an area of peat hags and bog , before long the ground improves as the ridge rises towards the summit , passing above Firkin Point on the lochside far below. The ground to the east of the summit is not a good place to go wandering , split by fissures and cracks, evidence of massive rock slope failure. By the time I reached the final summit the temperature had dropped and the wind risen so jacket, hat and gloves were back on , a quick snack at the trig point and I set off SW to descend to the corner of the forestry above Invergroin . 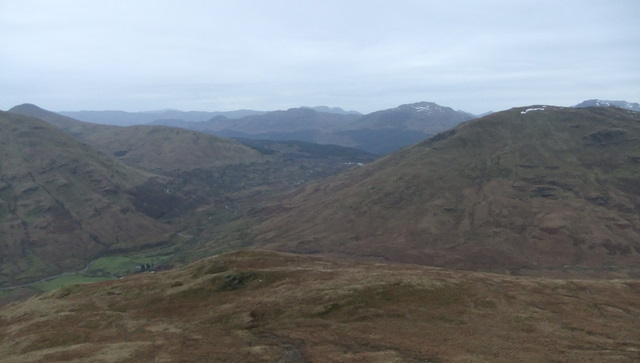 Invergroin , the mornings ascent to the right Skirting around the west of the plantation on very wet ground brought me back to the layby , completing a very nice circuit , these really are lovely hills , judging by the lack of people and paths a good spot for a bit of peace and quiet too .

good report gavin, i planned on doing these a while back and got soaked in the lower part of the forest and headed home, will keep this report in mind for next time, cheers

Well done on getting so many clear photos on what will probably be the last decent day of the year.

Great report Gavin and pity i was not fit enough to join you.I remember the pull up after Tullich hill and a great wee range of hills.Interesting to note the lack of snow on the Alps at the moment but reckon that will change over next couple of days.
Dave

These hills have great views of the Arrochar Alps. Definitely somewhere to try and sneak off to next time I'm in Glasgow.

Nice one, Gav. Looks a lovely wee day out.

Hi folks, lovely wee hills indeed , just minutes from the A82 racetrack . Winds under 80 mph are a help too .

Nice report thanks for posting, i've had my eye on all the Grahams in that area for a wee while now. Hope to venture there soon