Well the day was set for the 27th, this would be the day I reached 100 Munro’s, IF we completed the full 6. Had already planned a couple of escape routes just in case, but Scoob managed to pick out one day of the week when the forecast was to be on our side.

We met up at 0830 at the start of the walk near the northern car park from the ski centre. It was a 0430 alarm for me, god I could have stayed in bed as I couldn’t get to sleep the night before…am I still getting excited the day before a big walk ?

After dropping Scoobs car off at the South car park, we regrouped at the start and were on our way around 0900 heading off towards Carn an Tuirc which looks close from the start and probably is. I had my usual trouble getting into gear and a stop on route to remove the jacket, soon found a pace to suit the direct ascent !

View back to the start and the disappearance of all the snow I’d seen just a week ago on Cairnwell was incredible… did I really need my winter boots ? 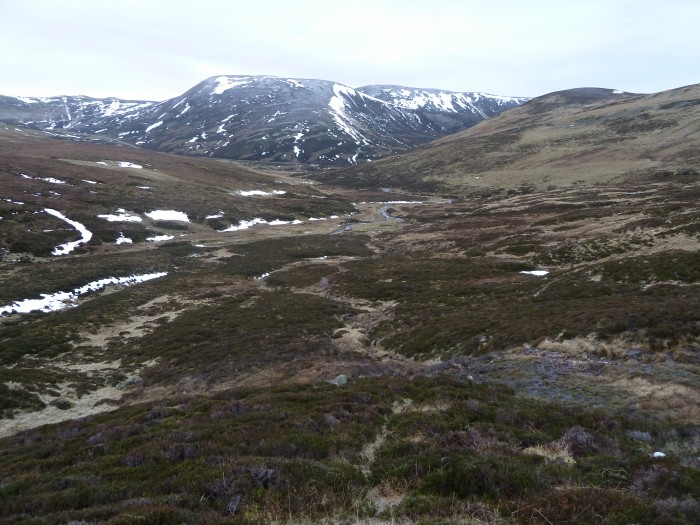 View back to the start 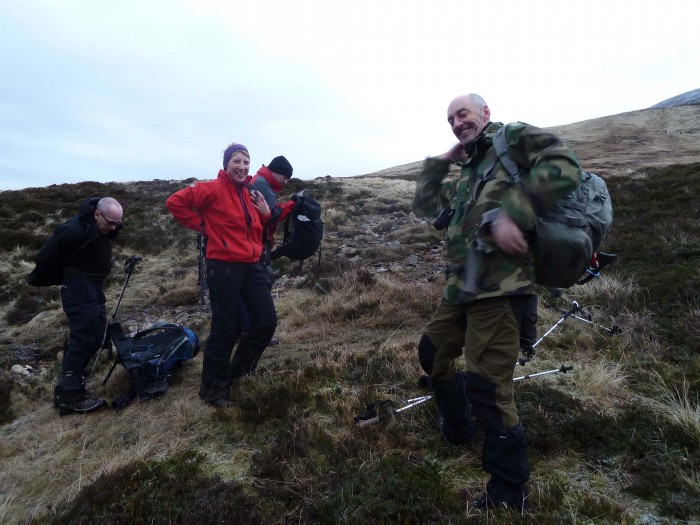 gear stop on ascent of Carn and Tuirc

Summit of Carn an Tuirc soon reached, the next part of the route could be confusing especially in the clag, but no such problem today as visibility was good despite a lack of sun. However, this section could still be confusing but having plotted a couple of waypoints in advance to keep the most level line it was onto Tolmount, which at this point wasn’t obvious in the distance. Good few snow patches, now firm, on the way and a chance for some ice axe practice on one. Good laugh here as various non recommended techniques were demonstrated, with Gary going for the mid slide hack at the snow, only to carry on down with axe embedded mid slope. Louise trying similar but hanging onto her axe, but discarding poles on route. I now had the pleasure of sliding down a gear strewn slope,, poles I could handle but didn’t fancy sliding down onto an axe so I rescued the poles and awaited Gary gingerly climbing back up to rescue his axe ! 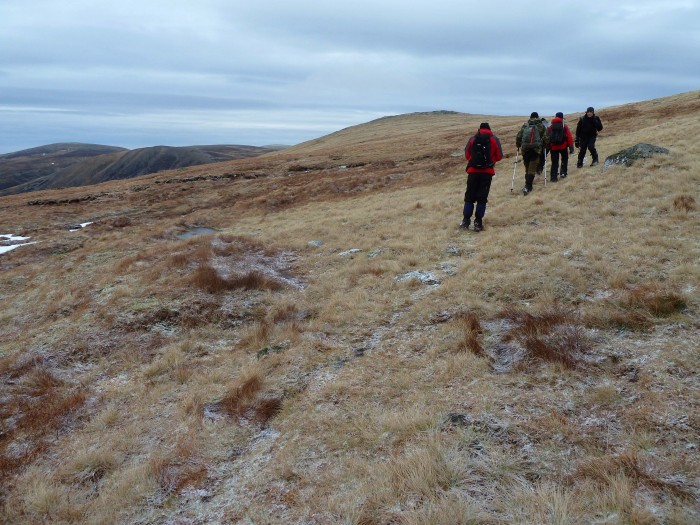 After much laughter and ice axe malarchy we continued to Tolmount now clear to us and a gentle slope to the summit with views of Lochnagar, Broad Cairn, and Mount Keen.

This was a topical spot for Scoob as this was where he had bedded down for the night at the summit, only a stones throw from a derelict building that would probably have afforded more cover than he had enjoyed whilst awaiting to be acquainted with the Braemar MRT on a past visit ! 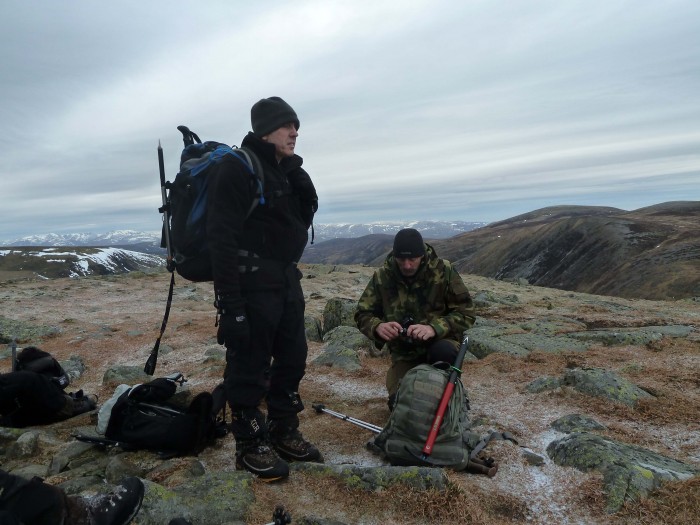 Scoob taking a close up of where he'd slept !

After a lunch stop here, well it was 1200hrs, and plenty of photos, plus a review of the ice axe video, what a bunch ! Tom Buidhe was clear and not too far off, so we headed off towards the flat area and then left to the summit, where having had lunch already we didn’t hand around as we had plenty more to do ! Next target Tom Buidhe across the dip Tom B summit me and Fi posing ! Scoob and Gary's turn to pose and Fi and Louise

It was quite a haul to Carn of Claise across the plateau but with good vis no need for map or GPS still, and the weather was holding.

Carn of Claise marked no 4 of the day and no 98 for me…getting close and nothing appearing to stop me now.

The next two are roughly the same distance apart and having just plodded across the plateau to Claise the climb up Glas Maol passed relatively easy (he says) and from there the same distance again would have us at the top of the final summit Creag Leacach. Look girls this is how you do it !

Time was on our side, although we were already reckoning on a finish by torchlight ! 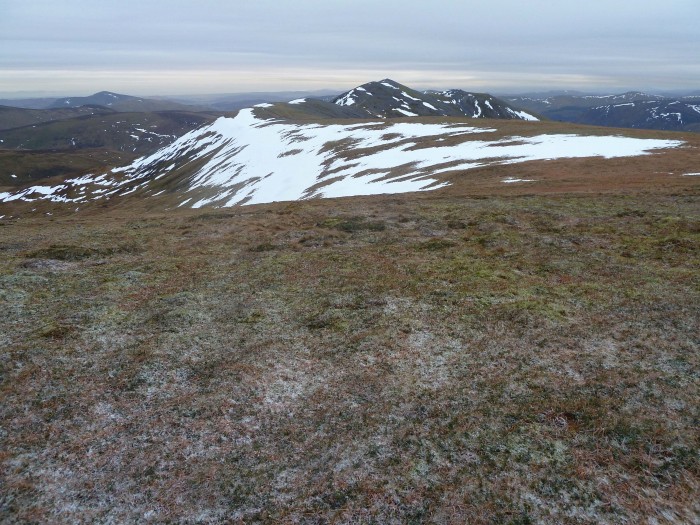 On Glas maol summit view to the last summit You all coming or what, we're burning daylight

The walk from Glas Maol was pleasant enough, a fine ‘ridge’ with plenty of snow still held in the eastern flanks, we continued up to the first rise and onto the summit as cloud began to roll in across the Cairnwell but still we were in the clear. But its not over yet as darkness drew near we set off down to the bealach with Meall Gorm before a right turn to meet the burn that would take us back to Scoobs car.

Louise had knee trouble setting in here but thankfully with Stevie leading the way, on what turned out to be a not too steep drop, across sketchy paths we reached the river. I say sketchy but that may just be due to the darkness now upon us.

I filled up with water and tried to add a chlorine tablet but the stupid tabs have a chlorine one and a neutraliser (to take away the swimming pool taste) both in silver foil with the name on each. You ever tried reading 1mm writing on a silver foil by headtorch aged 52 (well almost) !!!! Given I’d only dispensed the one tab (chlorine first) and the fact the water didn’t taste of swimming pool when I reached the car it must have been a neutraliser I’d used Doh ! Still 24hrs later and I havn’t used the loo anymore than usual !

The route out along the river was tricky, a path marked on maps but all we could find was where others had presumably made their way across the embankment through the heather and at this point in the day it was a bit tortuous. Eventually we plopped out by a proper track (maybe it was higher above the river ?) and I checked GPS to ensure we headed straight for the car (don’t want mistakes at this point) and Scoobs car came into view through the now drizzle that was forecast to set in at the end of the day.

We all bundle into the car, yours truly in the boot, and off to the start which we duely arrived at having missed it te first time and a quick u turn we were there.

A cracking day in good weather, some wind but unlike recent trips no trouble standing up, more new pals and some good laughs, couldn’t ask for more….Oh nearly forgot did I mention I reached 100 !

well done guys and well done dave for hitting 100. When i was out with you last. You where not to sure if you would hit 100

Cheers Ron, that was thanks to Scoob for picking out a 6 in one day, I must confess I didn't think there was any like that left, especially this time of year !

Next target to reach the halfway mark of 140 ish ! 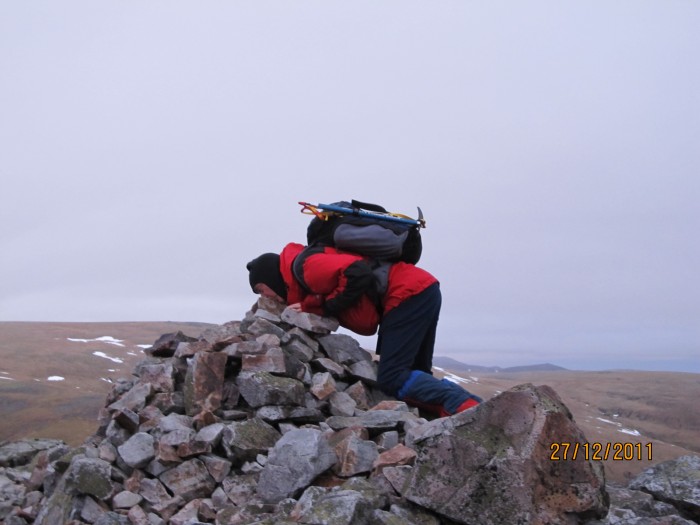 Congratulations on reaching 100, looks like you all had a fun day

Yep, congratualations and well done, 100 is a special number on your munro count! Still trying to decide which number is the next special one? Good to remember a Corbett or two as well....great stuff

Well done on the ton

Can't believe you forgot the dram though

This is a route I have planned for my trip in the Summer, you have convinced me I can do it and increase my Munro count to well short of 100

Love the video, did you mean to play human skittles????

Another great day out. Love the report Spider, makes it seems like a walk in the park lol.
es
Congratulations again on you 100th

Still laughing at video too & yes Polly, points were being scored for human skittles

It is amazing how quickly the snow has gone

Congratulations on the ton

Looks like you had great fun, especially on that bank of snow