Decided after eating too many mince pies and turkey over christmas it was in my best interest to get back out on the hills and burn off some of the extra calories. Today was the day that worked best for me and my mate so it was decided that we would tackle Ben Chabhair. I had been put off doing this munro previously due to the reports about it being very boggy but it was the closest one to home I still had to do so I thought may as well get it done. On reading the MWIS forecast for today and after the heavy wind we had yesterday I decided to pull out last night. My mate then preceeded to talk me back into it so I blame him fully for what we endured at the summit

We set off from home this morning at 7:30 in torrential rain towards the Drovers Inn and were kitted out in every bit of waterproof clothing we had with us and ready to go at 08:30. On leaving the drovers Inn car park we actually hit a dry spell in the weather and began thinking it might not be that bad afterall. We crossed the bridge towards Bien Glas farm and began following the WHW path around the burn but soon had to head back to the main farm access road due to the extensive flooding of the burn. This hill doesnt ease you in at all, as soon as you are past the last of the wig wams its a full on steep ascent up the hill at the back of the farm behind the WHW route. There are a few squelchy sections here and a few very steep stiles that must be tackled.

Once you reach the top of the waterfall and the initial hill you follow a fairly obvious path along the route of the burn towards the lochan. This section is very, very boggy. Lost half a leg a few times on route. On reaching the lochan at the head of the burn we began heading left towards the now snow covered hills. Route finding was difficult here due to the thick snow and we were also getting hit with snow and rain showers as our dry spell had now ended. About half way up the first snow covered hill the going was getting too tough and we had to strap on the crampons and get the ixe axes out.

The next section coming up through the crags was quite good fun and we still were not getting a glimpse of what was to come. My mate Gregor was having trouble with his crampons and in the end had to take them off so the going was extra tough for him. This culminated in us reaching an ice section we had to cross and Gregor not being able to take a single step without slipping. I went ahead and held my axe out to the rear and began slowly pulling Gregor over the ice. We slowly made it to within about one metre of the other side when Gregor slipped and couldnt keep the grip on my axe and slid all the way back to the starting point with an impressive ice axe arrest thrown in for good measure. This was actually quite funny to watch although the detour Gregor had to take to get around the ice wasnt as funny to him im sure.

We were almost at the summit when the madness started. The wind picked up to speeds that id never experienced before. It was impossible to stand and I had to actually crawl on my hands and knees at sections to stop myself being blown away. To add insult to injury the waterproof cover on my bag had came off and was acting like a sail behind me and my left crampon somehow came detached so I ended up crawling along with one crampon on, my axe in one hand and my crampon in the other at the same time as trying to reel in my bag cover which was flailing behind me. There was just no let up in the wind and it was belting our faces with snow at the same time (Im sitting here typing this with the reddest wind beaten face you have ever seen!). The thought of turning back came into my head loads here but we were so close. We must have been about 100m away at the worst point. With the summit cairn in view about 30m ahead of us we managed to find a bit of shelter in a rut and recompose ourselves, sort my crampons and detach the sail from my bag. With one final push we were there, copule of quick photos then away again. Visibility on the way back was zero. I would have done anything for a ski mask to stop the wind and snow pelting my eyes. The route we had taken up was now unrecognisable with the sudden blizzard that was going on around us. We decided it was best to descend quickly to a calmer level and veered off the path we had came up on. We made our way as quickly as we could down until the lochan was back in site and the wind was calmer. I was dead on my feet at this point so we stopped for some food to try and get the energy levels back up. Snow and rain would come and go for most of the way back but nothing as bad as it was at the top.

My left knee is killing me, my face is red with the wind and I have experienced the strongest wind I have ever been in but it was a great day out in the hills and a good sense of achievement looking back on it. Ill definately be paying more attention to the wind warnings on MWIS on future walks though!

Sorry for the lack of photos it was just too wild to get the camera out too many times. 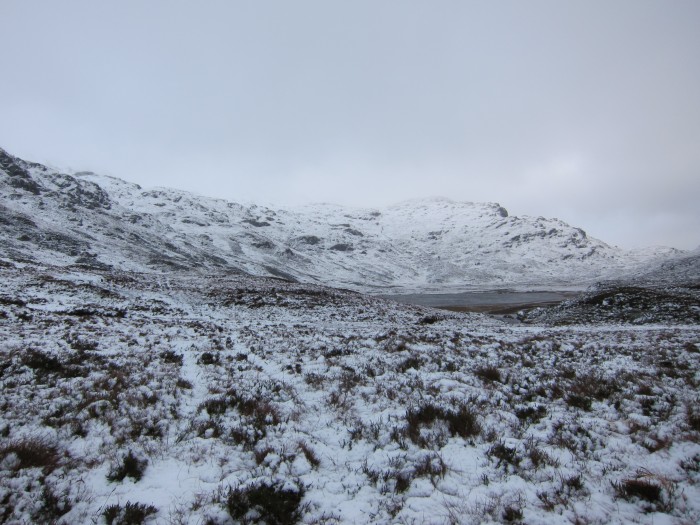 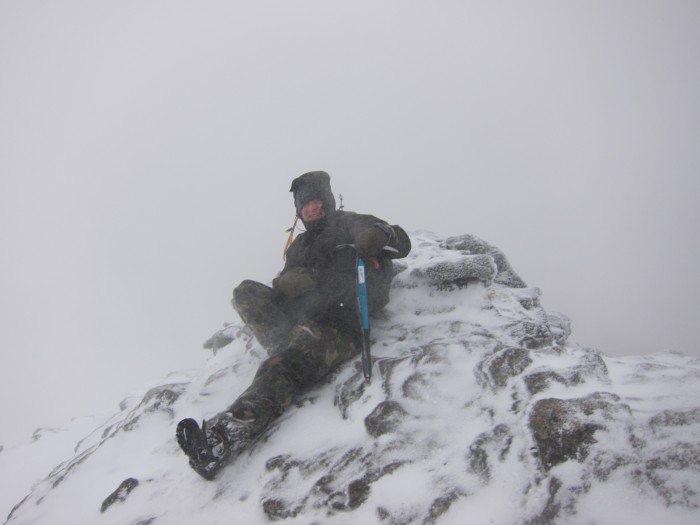 Gregor at the top Well done on getting out as that looked grim

Now you can eat double as you've burnt off them calories

Hi xpfloyd, as Taggart would say "There's been a murder"

Sounded really painful too. Well done on persevering. I am sure I would have called it quits way before the summit.

Monty, we did have a little chuckle to ourselves when we got back to the car on what we had just done for "fun"

its always great on reflection

, i know exactly how you feel me and two pals bagged ben lomond in identical conditions, we had wind all way down also and seemed to swing round so was none stop razorblades to the face, my jacket,tammy and rucksack froze because of the windchill, still had a ball canny beat it!had a lovely pint and soup in drymen to top off a gid day oot!

nice report,i thought the weather was crap when i walked this but your weather takes the biscuit(or mince pies)

well done on keeping going when everything was trying to get you to turn back,

its amazing that after enduring the weather,you reach the car and look back fondly and have a laugh,have done this many times

, i know exactly how you feel me and two pals bagged ben lomond in identical conditions, we had wind all way down also and seemed to swing round so was none stop razorblades to the face, my jacket,tammy and rucksack froze because of the windchill, still had a ball canny beat it!had a lovely pint and soup in drymen to top off a gid day oot!

iainwatson wrote:its amazing that after enduring the weather,you reach the car and look back fondly and have a laugh,have done this many times

I think we may have all lost it

Nice report m8,the photos turned out really well considering! I made a promise to myself to sort the crampon/boot situation before our next adventure

It was a great day real man vs wild stuff ye canny beat it!

wow, sounds like a wild day out ! had aright good laugh at the image of you on your hands and knees in the wind

all`s well that ends well i suppose. I`m heading out on monday to arrochar and am a bit apprehensive about the wind

Can't believe that you chose an already difficult route in such awful conditions!!!

Thanks for posting such an entertaining report

Gman27 wrote:Nice report m8,the photos turned out really well considering! I made a promise to myself to sort the crampon/boot situation before our next adventure

It was a great day real man vs wild stuff ye canny beat it!

Yeah mate itching for the next one already! But yeah get your crampons sorted for next time lol!!