I had been planning to use the last week to get to my target of 100 for the year end. However the weather has defeated me.
The only days I had available were Wednesday and Thursday and with the shipping forecast on Wednesday morning finally convinced me it was too wild out there. So Thursday it was.

I left Glasgow at 06:20 and after a Bacon Egg Roll and Coffee from the Bake House in Killin was organised and walking from the suggested car park just after 08:30.
I took the bridge over the river near the farm and headed up the track to the pump house. Full water proofs were required by the time I had got to the pump house.

The walk up by the river is really nice with a lot of impressive waterfalls. A couple of Grouse were put to flight.
Picking my way across the hill and disturbing a lot of Deer in the process I gained the ridge towards Sgaith Chuil just by the last outlier (530m). 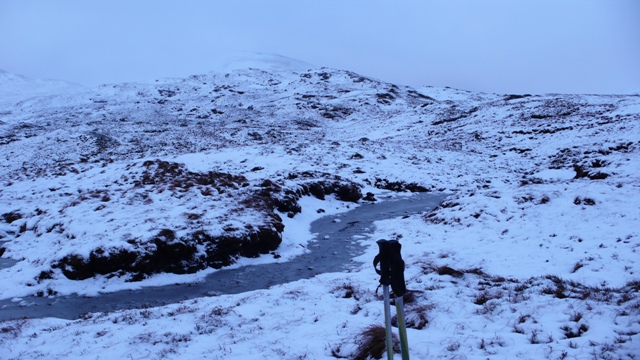 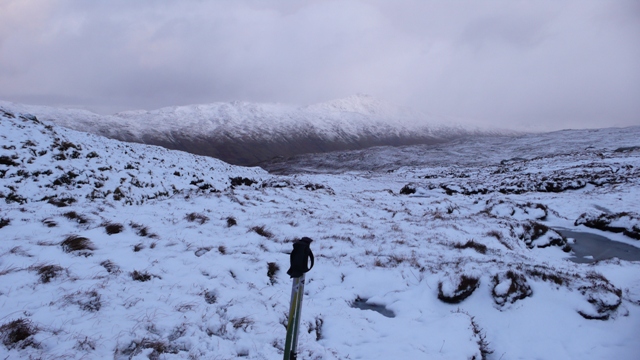 The going got harder and harder in the wind and my new goggles were brought out for there inaugural Munro. I had not used goggles before and if anybody is doubting there benefit, stop. They were brilliant. 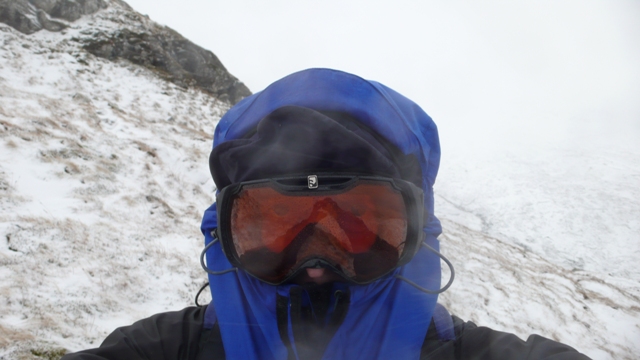 I had random views of what the day was going to be but eventually progress in the wind became more and more difficult. The snow was coming across horizontally and the walking poles were heading in the same direction. I could see a plume of sprindrift being blown from the top of the ridge ahead and thought that by the time I got there, in another 200 metres it would be approaching the foolhardy side of risk. So reluctantly I decided to keep the objective for better weather. 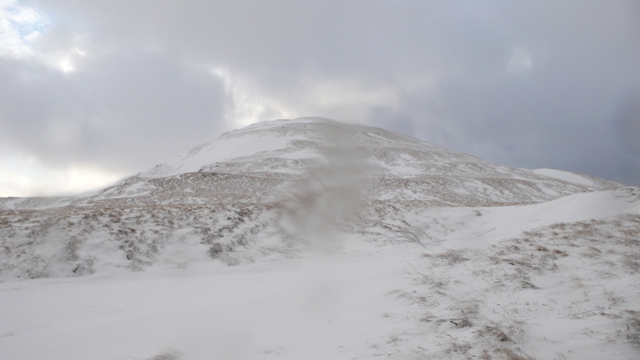 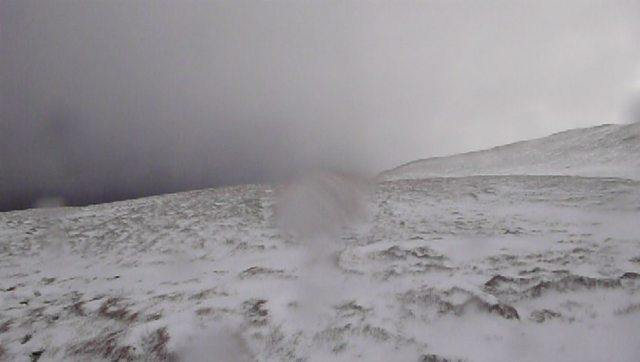 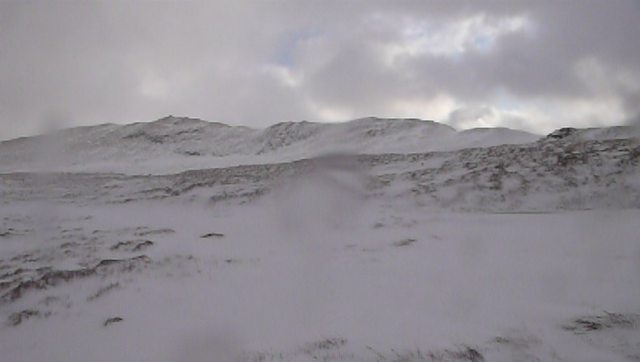 Once out of the wind lower down the sun made an appearance and I was able to take in some views whilst munching a sausage roll. More deer putting in random appearances. 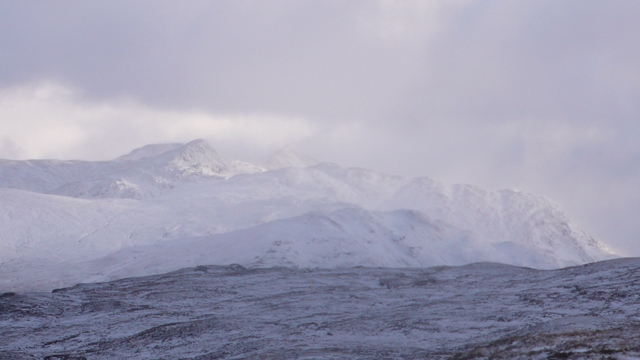 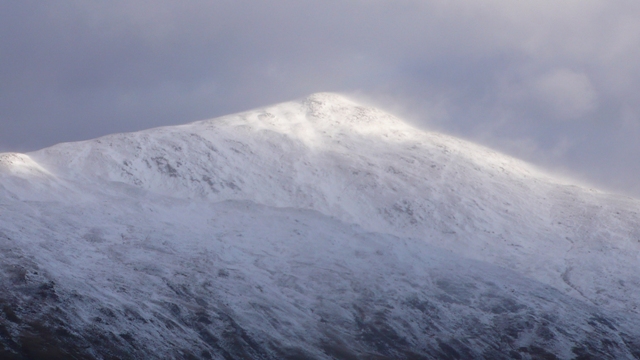 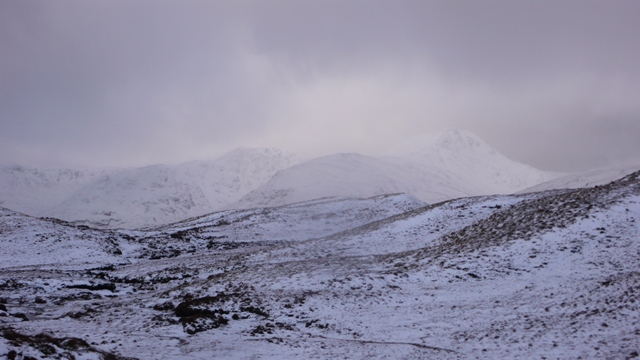 It was full on rain again by the time I was back on the track and all the way to the car.

Despite this I would still call this a good day. It is good to experience the elements in this kind of mood every so often. Keeps your feet on the ground (or not in this case!!).

Well done though for having the intelligence to turn back and live to fight another day. On the plus side- your tummy was nice and full

Have to agree with you about the goggles, once they're on you don't want to take them off!! No more watery eyes- yippee!!

This little blighter did for me the other week too, but that was in good weather (well, at the start anyway). These two hills are beasts and you really have to earn them, that's for sure. You'll get to 100 soon enough though and hopefully the slight delay will be worth it

No luck Steve ,was going to try beinn heasgarnich tomorrow but looks like quite a bit of snow still up that way ,could be a real bog fest as well so might look elsewhere.Good luck on getting to the hundred

These days are pretty good - also frustrating as hell...when the weather decides to show you who is stronger!
But it is also a good time to see if you could have done with different equipment etc...best way to learn I think!

Thanks for the comments all, always feel rubbish when turning back but it is usually the right decision.
I will be back there when hopefully there has been a long cold snap and more settled conditions. Glen Lochay was delightful and will be the way I tackle these next time.

And yes Pollyh33 I was replete with food! How can you still eat so much after the last few days festivities

, I do not know. Despite the extra weight the wind still had the best of it!

Trust you all, and all of the WH members have a great New Year whatever it brings.

Steve - bad luck! But, right decision - it's a lovely summit, worthy of chilling out at the top. Good luck on your next outing - didn't even know there was a Bakehouse in Killin - good to know.

There's been a few failures recently, myself being one of them but allways look on the bright side. The hills are allways gonna be there, no shame in turning back even though it does get you down

Thanks guys. Won't be the last time to retreat either I expect. When walking solo it's best to make the smart decision.

Kevsbald. The Bakehouse is just after going across the bridge on the right. Looks like a shed. I had not noticed it before but will stop there again when next in the area with an early start.

unlucky with the weather,but good choice to retreat(if i wasnt so stubborn i'd have turned back today at corrour

i'm not right in the head that way

were the goggles expensive?,i'm looking for a pair for the horizontal icy shards that winter throws up

I got a pair of goggles in TK Maxx today for £15. Bargain!

nothing worse than having to turn back. I had 4 failed attempts in last year. That includes 2 in the last week.
Was out on friday my mate fell through ice. Soaked up to his waist. Had to turn back 20 km walked with 1000m of ascent

Good try Steve - and no shame in turning back!

I have to keep reminding myself that a big part of keeping safe on the mountains is making right decisions - like you did - when conditions get tough!