I haven't been out in a while thanks to a busy spell at work that had me travelling up and down to England the last few months, so when my partner asked me what I wanted to do for my birthday it was an easy answer for me (and a sign of my age now?).

We checked the weather and knew it would be best to stick to the east if possible, still wouldn't miss the wind but we've done winter climbs before so knew it would be cold. Bags were packed ready the night before and a stop at the local Tiso would ensure we had our map (not making that mistake again!) I had also downloaded viewranger for my phone as I wanted to track our route so tried that out - but not to much success

We got there a little late - as organised as we might be we are guaranteed to be late for everything, it's just us. There wasn't much ski-ing going on in Glenshee so there were no skiers to avoid, a couple of sledges though which looked fun.

We headed for Carn Aosda first and the weather was fine until we got to the junction and then Oh My Gosh - I may have lived in Scotland for 30 years but never have I experienced wind and snow like that! It was just so strong - blowing all the snow up my face so I couldn't breath - I decided then and there my next wish list would include ski goggles and and a proper balaclava. We stood for a good minute just clinging to each other asking 'why are we doing this again?' - nothing brings you closer than gale force winds combined with snow on a hill side ha ha. We went right at the junction and ended up at a sign telling us that Carn Aosda was behind us. So back we went and carried on further down the track. The blizzard cleared and we stopped to consult the map and view ranger. Turns out we had circled the summit of Carn Aosda and then come away too far, so back we went and finally reached the top. Me at the cairn We headed over to Carn a'gheoidh as the intention was to do the Cairnwell 3, you can see in one of the pictures we had printed off the walking guide from this site to help guide us

About twenty minutes after the last storm had passed another one arrived and this one was just as bad. I couldn't see where we were going and it had got to the good old stage of 2 steps forward, 1 and a half steps back. For a brief moment we did consider turning back, we had managed one - albeit a very easy one really even in that weather so was it worth it to carry on? Well obviously yes as the storms were passing and when it cleared the views were undeniably worth it! So out with the compasses and onwards we went. By the time we got to Carn nan Sac my partner made a call - it was either going to be Carn a'gheoidh or The Cairnwell. We didn't want to risk still being up there in the dark and our water had frozen in the first hour. So we dived down the side of the cairn to get out of the wind and have a cuppa before starting over to The Cairnwell. Second 'summit' of the day (at a break in the weather) View from underneath the cairn 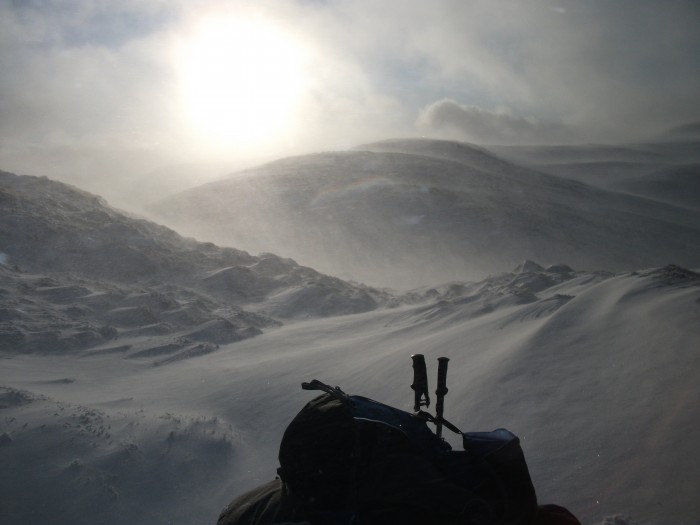 We managed to back track to the path going up and as we got there, yup you guessed it, another 'white out' such fun! At least we could still see the fence at this point

I'm not going to lie, it was a struggle up to the summit - the winds seemed to be even stronger now and I was well aware if it got hold of me and carried me off it wasn't going to end pleasantly! The towering transmitters also petrified me as I was convinced a bit of them would fly off and hit me. I came very, very close to almost crawling up the last little bit and had adopted a rather questionable pose when trying to brace against the wind (my partner called it my bear grylls pose ha ha). At the top we quickly jumped in to the shelter and even though I use that word loosely as snow was constantly swirling around in there it still shielded us enough for another cuppa. In the shelter catching my breath Beginning to lose the light

Coming back down - I don't know how I did it. At one point my partner was trying to pull me towards him but the wind was so strong he couldn't move me. At another I must have been blown backwards at least 10 feet (possible exaggeration there but it's my birthday, that's allowed

) Once off the top little bit all was good though - (except for my face which was shockingly wind beaten and remained red much into the next day) We retraced our steps - which couldn't be seen of course - back to the ski lifts and then headed downwards, cursing ourselves for not bringing sledges. I think I fell at least 6 times on the way down but I just see that as getting down faster, especially as I would end up rolling a good few yards every time!

We got down in time for a hot drink at the cafe and after we defrosted we headed home. It may not be the way everyone wants to spend their 30th but at least I will always remember mine and accomplished something

Next stop is the sales to buy some goggles, ski masks and a flask that won't let water freeze as he's now promised me a walk on the 1st!

Sounds like ye had a tough walk with the wind, hope the weathers a bit better on the 1st

its always good to be out on the hills

I spent my 30th birthday out and about today as well. Not nearly as exciting as where you were though, but still very enjoyable. Happy Birthday!!

Hi Littlemrs29
Yes the pic's never show how strong the wind gets,still go to get out and about though.

Although it was quite windy, at least you go some views to take in as well. I spent my 30th birthday in September in a pub or two