Tying up the year in Dalwhinnie

Tying up the year in Dalwhinnie

Pretty awful weather over the christmas holidays, so I was glad to see a weather forecast with lower wind speeds. The chance of some views looked higher to the east, so I decided to head to Dalwhinnie again, but on the train this time. The forecast didn't look that great though, so I didn't even bother to broach the issue of doing a bothy trip to my wife.

Dalwhinnie.gpx Open full screen  NB: Walkhighlands is not responsible for the accuracy of gpx files in users posts
There are lots of trains south, but the first one to stop at Dalwhinnie doesn't get there until 10:50 am. Another late start for me! The snow was down to the road but there was a vague smudge of sunshine over the Drumochter Pass. I walked up the main road past the distillery and up the first hill. A track at the top of this led to Allt an t' Sluic Lodge, where there a herd of stags scattered to let me past. Bypassing the lodge itself on the right hand side, the track ran pleasantly up the glen, with Meall nan Eagan filling the view ahead. Crossing the stream a few times, I was soon without a track. The Fara Dircs were visible on the left, and I hoped to see more of these later. I headed for the E ridge then worked my way up through small crags to a line of old fence posts. These led to the summit via an area of very deep wind-blown snow. 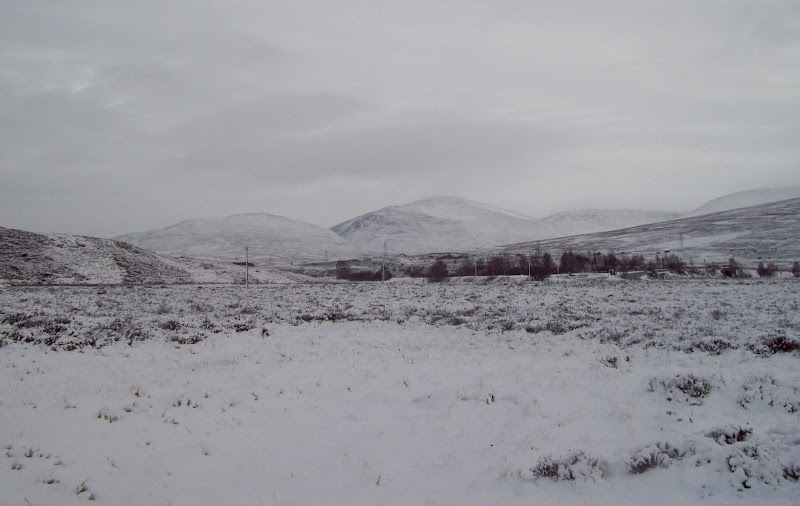 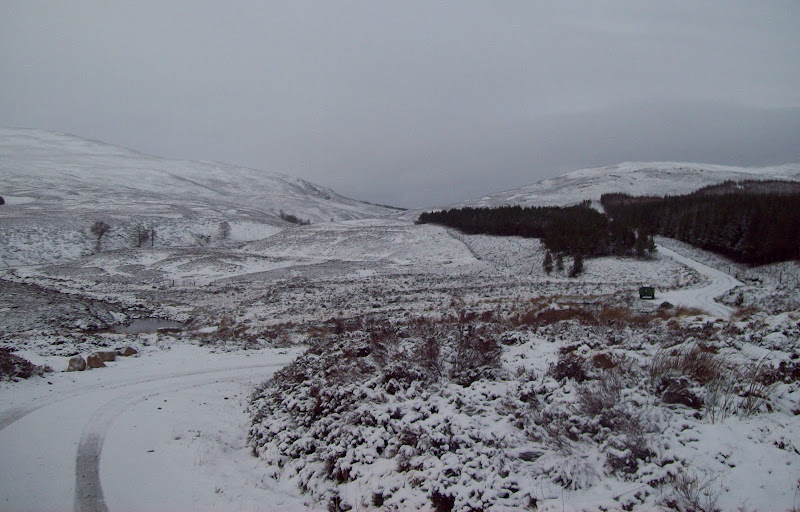 It all looked promising for a second - Carn na Caim: 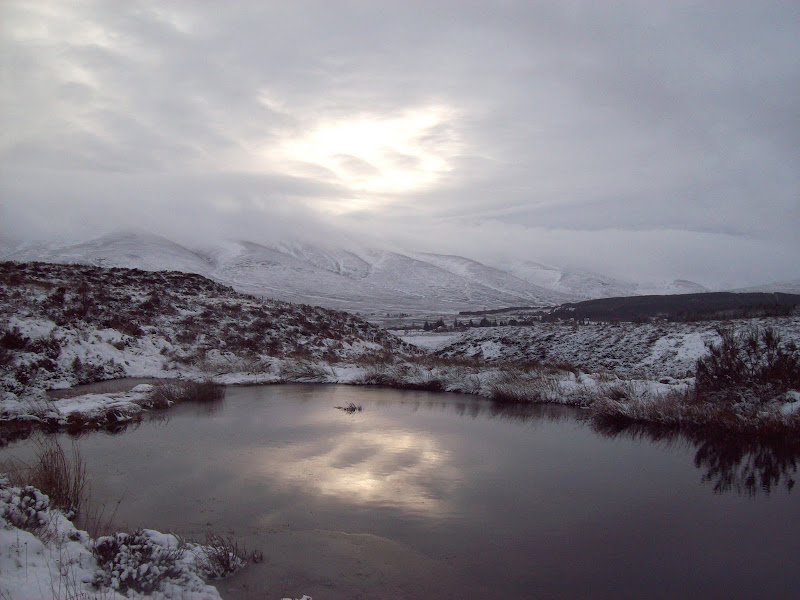 Deer on the track: 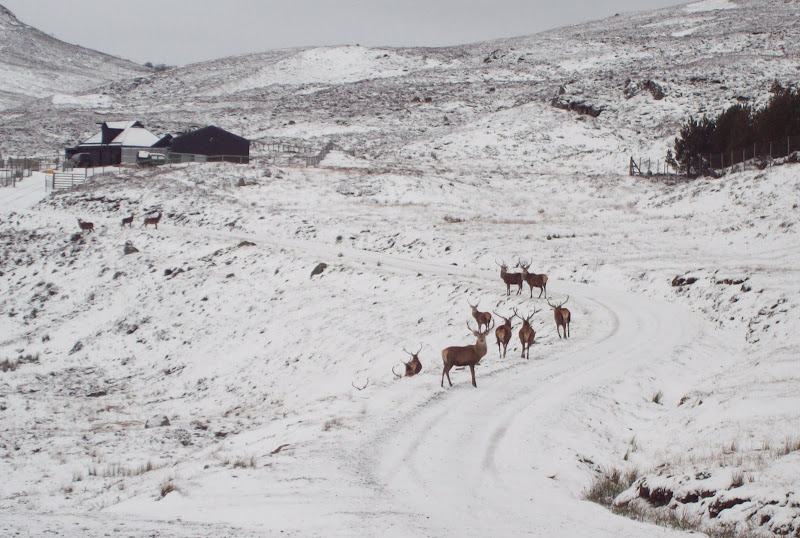 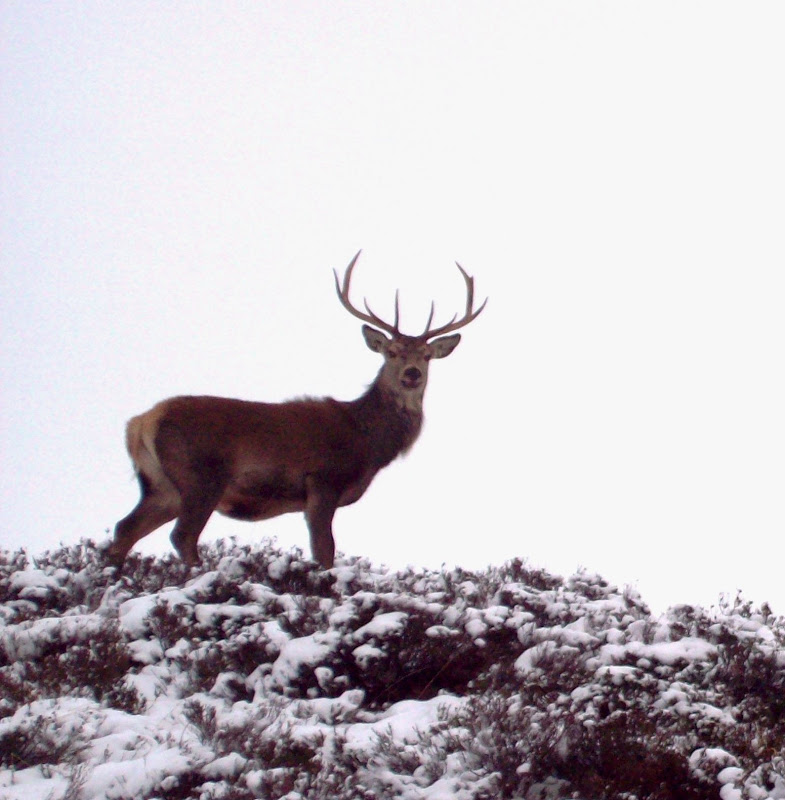 Up Gleann an t' Sluic to Meall nan Eagan: 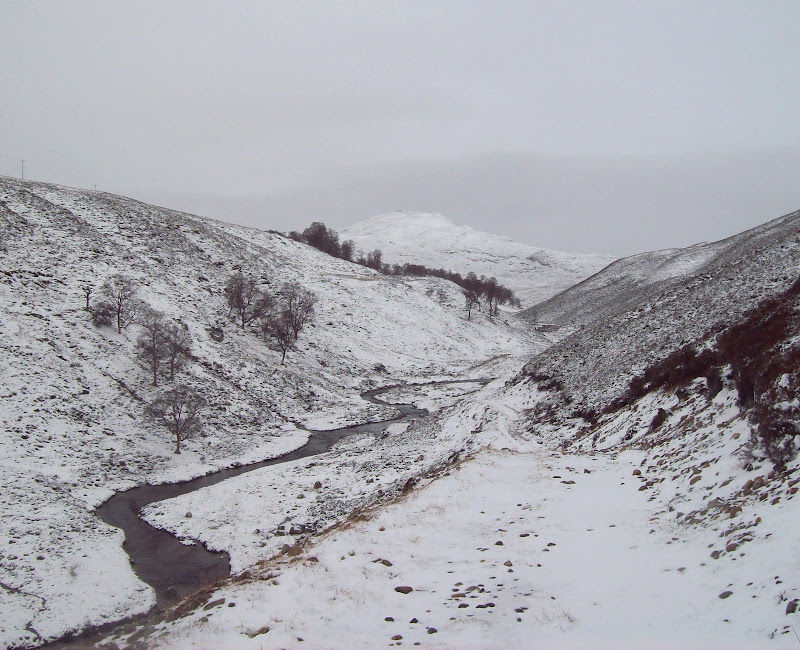 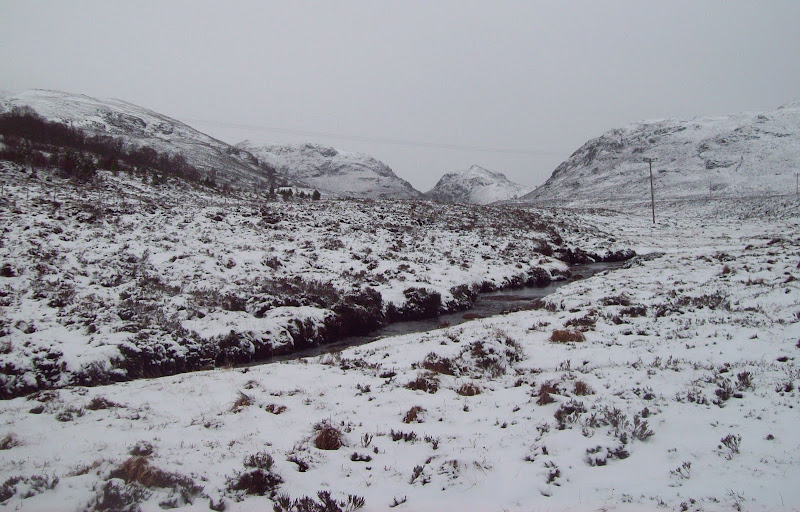 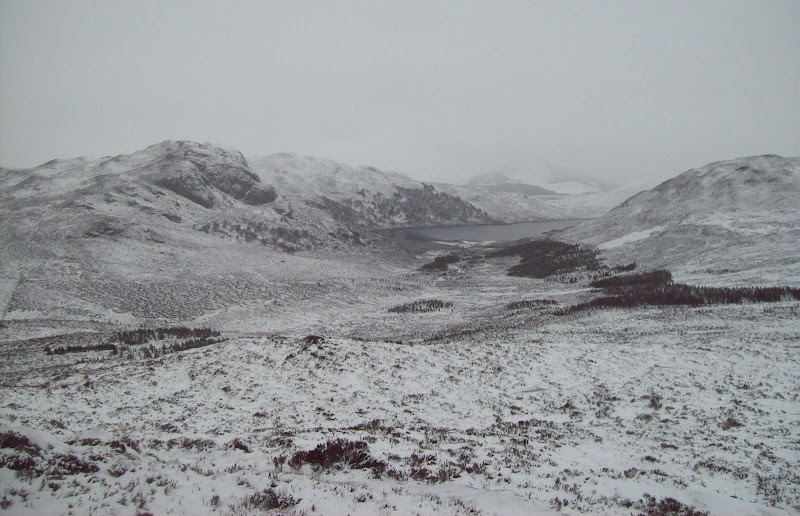 Looking towards the summit of Meall nan Eagan: 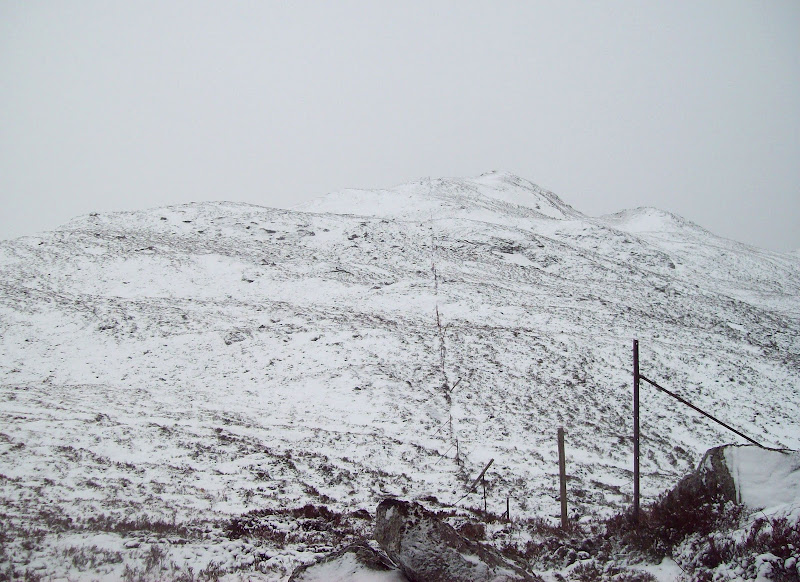 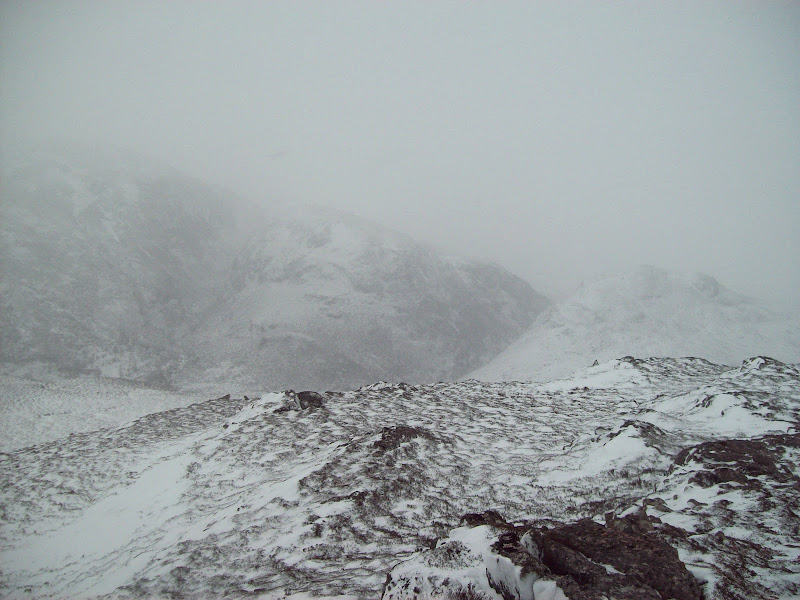 There was never a point when the weather turned noticeably worse, but it had clearly gone gradually downhill over the last hour. The wind was up on the summit (although barely registering compared to christmas eve!) and the Fara and the Dircs were barely visible. I decided that I didn't fancy a second trip up the Fara in the clag, so I made other plans. I decided that a full tour of the Dircs could wait for another time, as I also wanted to traverse the full Fara ridge.

I also thought that 350m of ascent was insufficient to work off the excesses of christmas, so I decided to head for Creag na Doire Duibhe, a sub 2000 that I han't thought of climbing before. I avoided the deep snow on the return down, finding a couple of patches of old snow, hard enough to slide down. Following a deer fence, I bypassed Creag Doire na h-Achlaise and climbed a couple of deer fences (some of them unecessarily). Despite a miserable mist hanging over everything, the surrounding landscape was intricate and interesting, with impressive views down to Loch Caoldair. I'm as guilty as the next person for rushing past areas like this in the good weather, bound for higher hills elsewhere. Definitely an area worth a look if you have a spare couple of hours in the area.

Creag Doire na h-Achlaise. Should have gone over this, not round it, but would've missed the train: 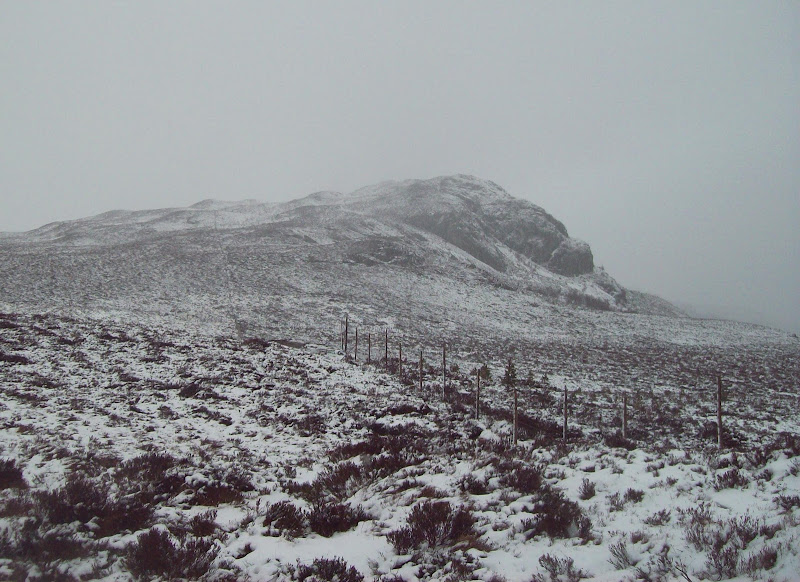 I might pretend this was actually taken in Knoydart somewhere: 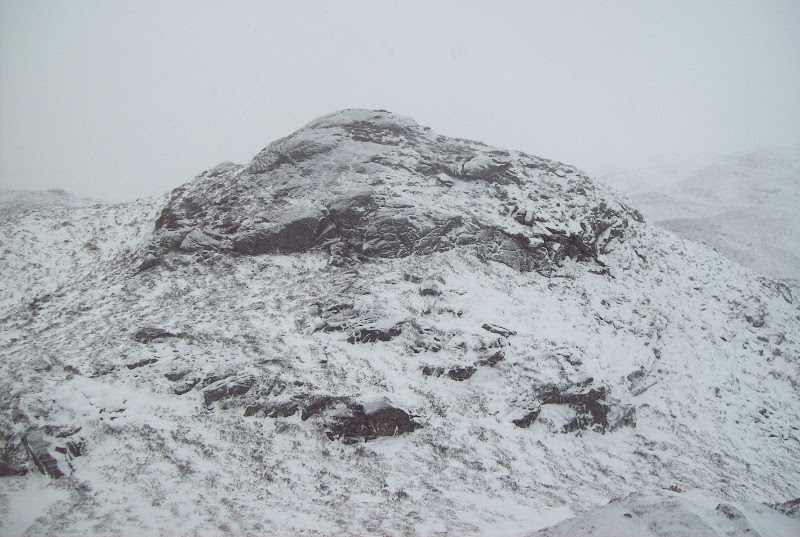 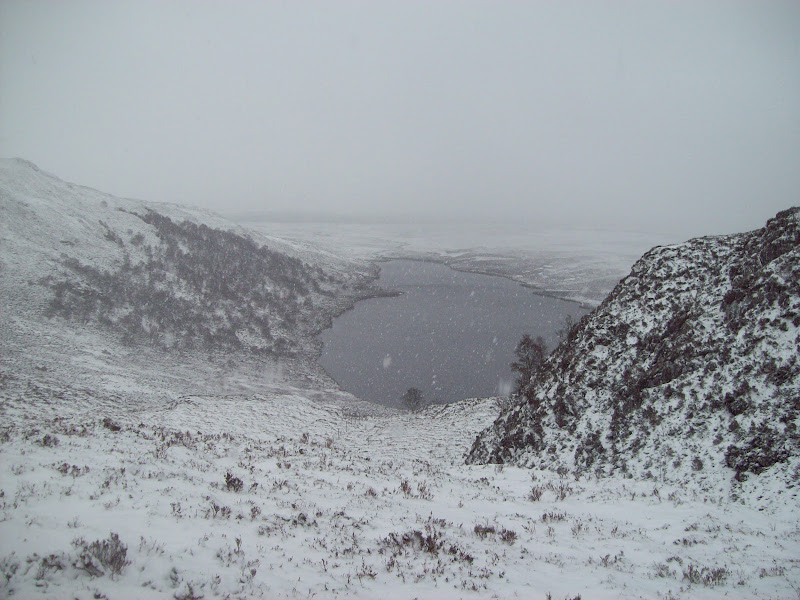 Back to Creag Doire na h-Achlaise: 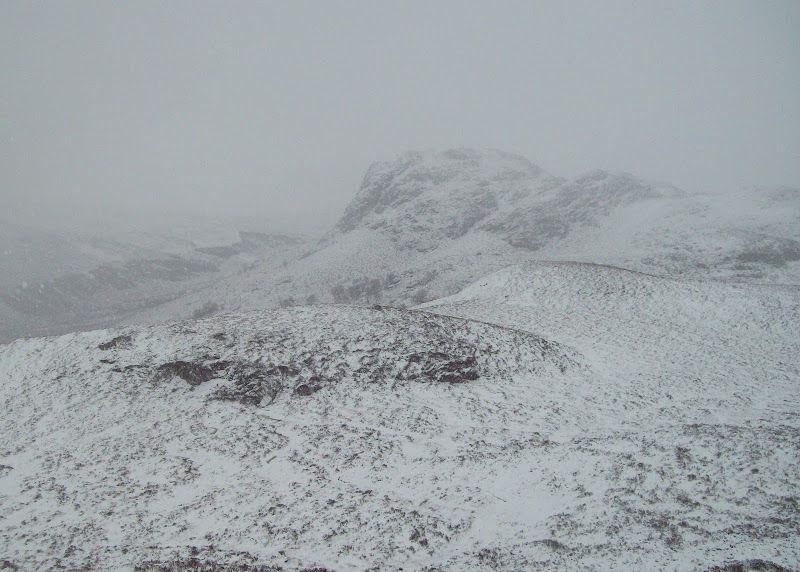 The final plod up to Creag na Doire Duibhe wasn't too bad. Despite the wet snow and thick heather of the lower hills, the going underfoot was surprisingly reasonable. Perhaps the temperature was keeping the ground harder than normal. Overall it had been a good move - away from the two summits there was barely any wind at all. 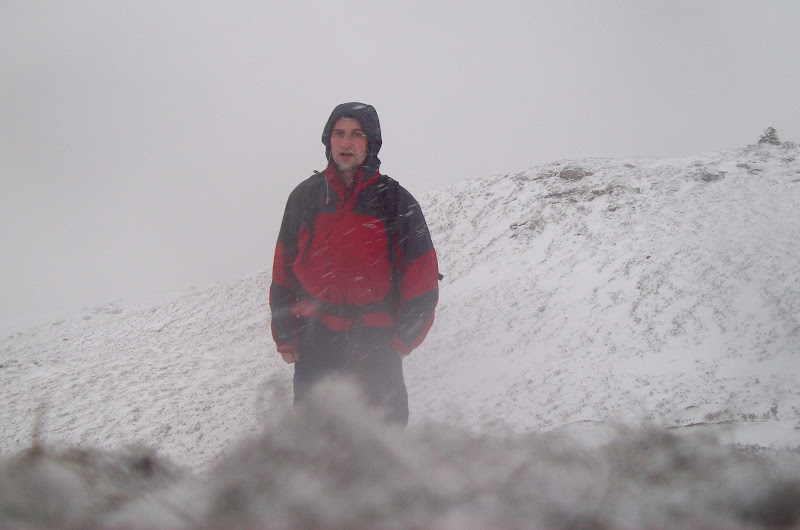 I dropped down towards Loch Glas-choire on reasonable slopes, following the edge of another deer fence at points and flushing a couple of stags. The ground around the loch was pretty wet, and I got wet feet for the first time (pretty good for me - thanks new boots!). There was a hut at the loch - obviously used for fishing. A better track led to the main Laggan to Dalwhinnie road, where conditions had deteriorated since I started out. I had a good 4 miles to walk back to Dalwhinnie, which had to be done pretty sharpish in order to catch the 4pm train. I thought about hitching a lift, but that would have left me shivering at the station for an hour. Anyway, most people seemed to be struggling to keep moving steadily, and I doubt they would've wanted to stop for anything. A decent pace got me back to the station with 10 minutes to spare, which was cutting it fine, but I wouldn't have wanted to be much earlier or I would have frozen!

Main road on the way back: 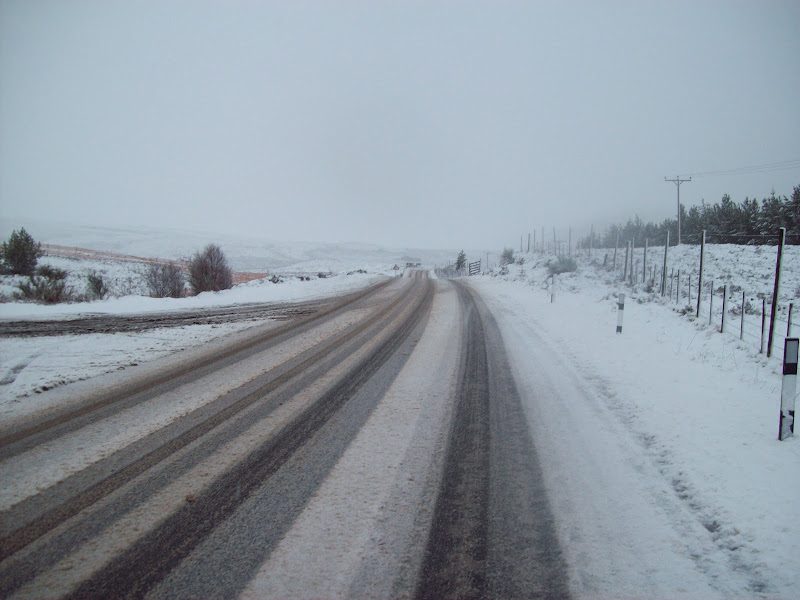 I considered getting changed on the train, but since I had a 4 mile cycle home in the rain at the other end, it seemed a bit pointless. I sometimes wonder why I bother carrying dry stuff with me on my public transport expeditions! A decent bit of exercise to end the year, but not really the conditions I wanted on this hill. Still, they can't all be nice! Hopefully the quality of my walks (and reports) will improve again next year.

Would agree on the weather malky - rotten compared to last year but hopefully it'll improve...

well done on getting out

your weather was waaaayy better than it was at corrour today,never been out in such bad snowy weather-mental!

Well done Malky - home in time so that's a happy wife right there.

That isn't even very far away from where I was. Must've been the extra height - were you on Beinn na Lap? I had an idea that things would have been fairly nasty higher up on the Fara, so I didn't bother with it.

Ta Kev - think I would have preferred your day on this

10mins is cutting it fine

Hate to think how cold you would have been if missed that train.....brrrrr!

Nice way to end the year.

Looking forward to much more next year.