Scotstown Moor and Glashie How - Aberdeen

Scotstown Moor and Glashie How - Aberdeen


After the fun of Hogmanay, we decided an afternoon walk was in order to burn off the alchol consumed last night, so we headed locally to Scotstown Moor. Arriving at 2pm, with the sun very low in the sky and with the moor looking fantastic bathed in sunlight and shadows, we set off on our walk. (My apologies for the quality of some later photos. The combination of low-light and unsteady hands, and possibly last night, didn't help my camera). Scotstown Moor information board at start. The start of our walk.

From the main carpark, we headed back to the entrance and took the path that follows the wall along the edge of the road. Its a nice path made of gravel, but is very close to a busy road. It finally reaches the very edge of the moor and turns uphill past some small, boggy lochans. This area is called Perwinnes Moss. 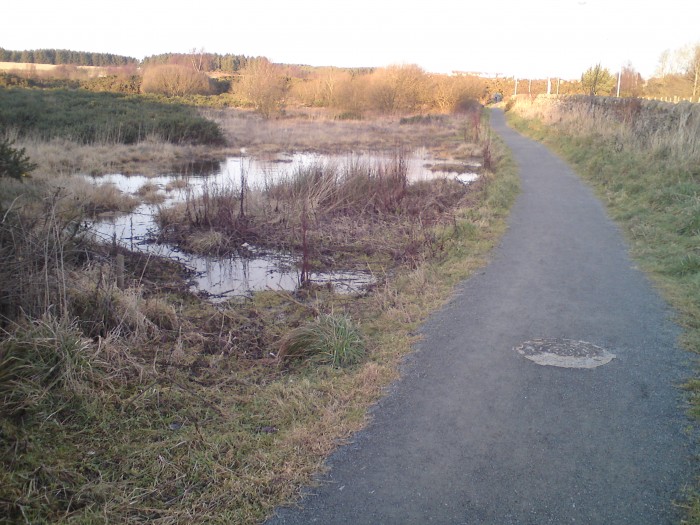 The path once it turns left. The path winds its way up a small hill through bushes and long grass. Halfway up this path is a small homemade monument to what we suspect was a family dog. Further along is a bench looking out across Aberdeen. A lovely spot on a summers day, especially when the wind is blowing from the south. Heading up the hill. Following the path uphill, we ignored all turn offs and followed the path as it turned left. There is a picnic table up here along with more benches. Reaching a junction, there is a path that makes its way through the pine trees and comes out to Corse Hill. We turned left and past the two buildings that are from World War 2. Supposedly they are to do with the RAF, but I dont know too much about them. The path through the pines. Building in the pine trees. Possible guards house as RAF Aberdeen was nearby.

Carrying on along the path, we reached a junction and turned to the right past another old building. The views from here are stunning. You can see the North Sea, rolling farm land, the airport and the Mither Tap. We followed the grass path down the hill from here. Path along the edge of the pine trees. 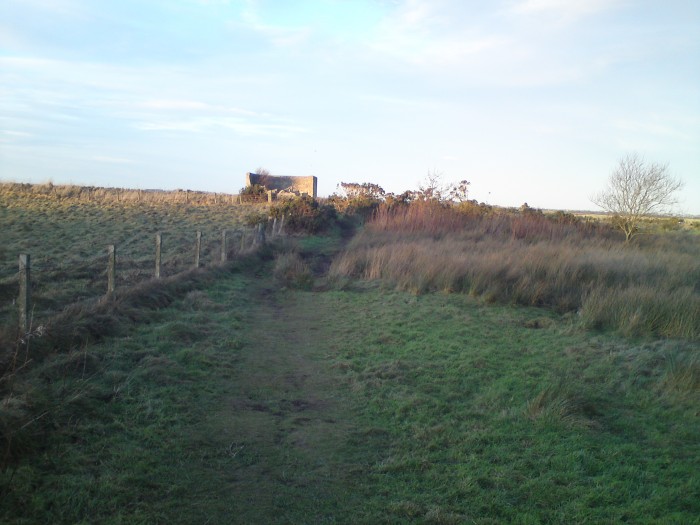 About to get to a lovely view. Airport radar across the hill. Across Dyce and the Mither Tap in the distance. Path heading down the hill.

It was becoming darker now on this side of the pine trees, but the sun was still out and the surround farms looking stunning bathed in a late afternoon golden light. The grassy path winds its way past numerous bushes and rocks and is a little boggy in some places. We eventually came to a land rover track and headed slightly uphill before heading down the path that leads between the bushes. Heading along the bottom of the path. 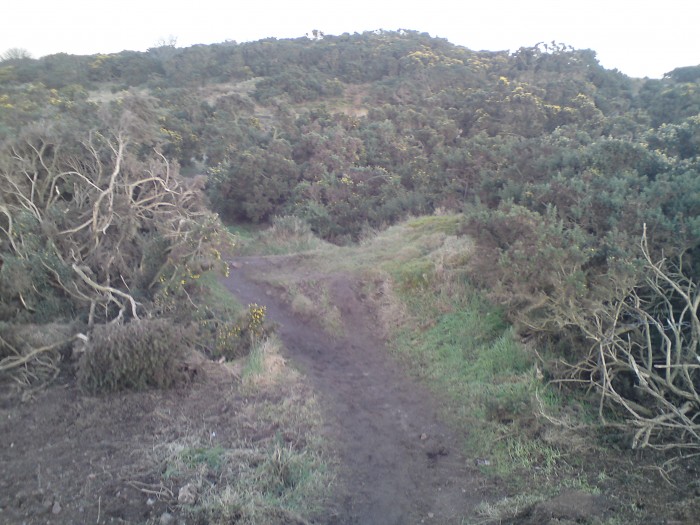 Cutting through the bushes after the land rover track.

This path brings you to a clearing with a man-made hill that looks out to the North Sea. We stopped an admired the view for a bit. We followed the path along to a fence and then took a path that looks like its been recently dug by a bulldozer. It was very boggy here, but there was enough grass on either side to keep our feet clean. The path climbs uphill before turning right at a fence and rejoins another path where we turned right. This brought us back to the pine trees. View from the man-made hill. Looking back down the new path.

Heading along towards the buildings again, we headed back along the path between the trees and then turned right. You can carry straight on past the buildings and turn left instead of right at the end as this meets up with the path we were now on. The path turned to the left and took us back to the car park. Crossing the road (be careful, it says 40 but cars still do 70 on this bit and its near a corner) we continued our walk in Glashie Burn. We took the path on the right and followed it along, ignoring all turn offs until the basketball court came into view. The path we took to the right, (apologies for the blur).

As it heads towards the houses, there is a path on the left that is on a 270 degree angle. We took this path which goes along the edge of a stream and heads into some trees. Heading along the edge of the stream.

The path becomes a little muddy near the end but it brings you out to the entrance again. Crossing the road (with care) we reached our car and headed home. Its a lovely walk if you only have a short amount of time and is perfect if you have a dog (or kids) as there are so many paths that can be explored, so you can zig zag your way around the moor. Spring/Summer is a great time to visit too as you will see bunnies, birds, the occasional deer and all sorts of different insects, the place comes alive!

Re: Scotstown Moor and Glashie How - Aberdeen

Happy new year to you both

Re: Scotstown Moor and Glashie How - Aberdeen

morag1 wrote:Another nice walk - you really love getting out and about in Aberdeen

Happy new year to you both

And a happy new year to you Morag. Aberdeen City and Shire is a great place. Hoping to post reports for many more walks that aren't on WalkHighlands this year. Just need to invest in a decent camera instead of relying on my phones camera.