Grahams included on this walk: Beinn Chaorach, Cruach an t-Sidhein

our_route.gpx Open full screen  NB: Walkhighlands is not responsible for the accuracy of gpx files in users posts
I decided to give the usual carry on a miss this New Year and get an early start to make the most of what looked like a very short spell of decent weather . I left the house just after half-seven for the short drive to Glen Fruin , passing a couple of folk trying their hardest to walk home from what must have been a very good party . Parked up at NS 276905 , 20m up the access road to Auchengaich reservoir ,with room for 4 or 5 cars here . From there the surfaced road continues to the dam , where I kept to the east side and passed through the small larch plantation before heading NE up the long but easy slopes of Beinn Chaorach. I reached the summit just over 1 hour after parking up , this hill on it's own would make a nice short outing. 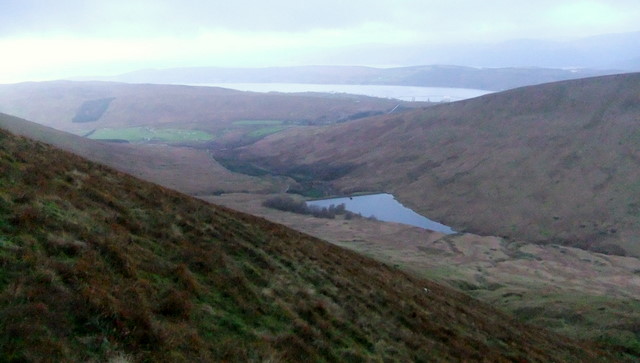 View back to reservoir from ascent 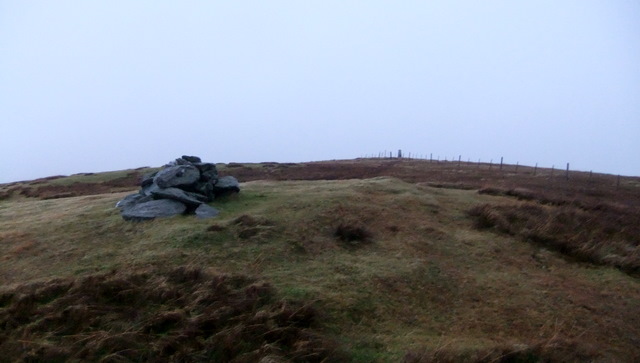 From the summit a long and easy ridge descends first NW then N to the head of Luss Water in Gleann na Caorainn , a beautiful and deserted glen , with a long abandoned farm hidden in its upper reaches . From the lower part of the ridge a stream crossing leads onto the shoulder of Beinn a'Mhanaich and I skirted around its slopes to reach the foot of the steep sided Cruach an t-Sidhean. 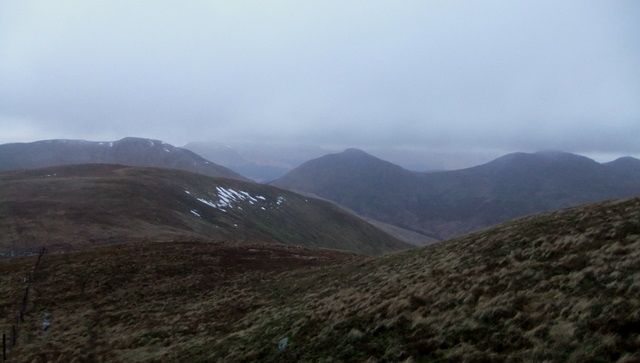 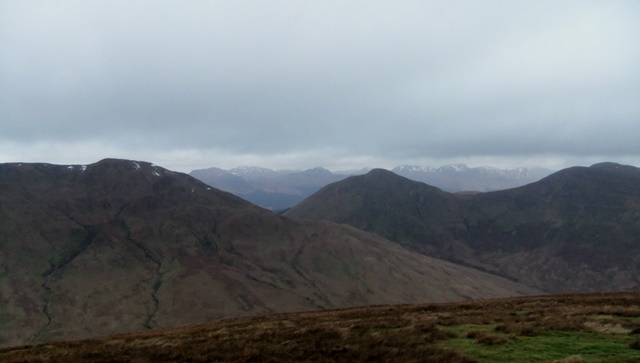 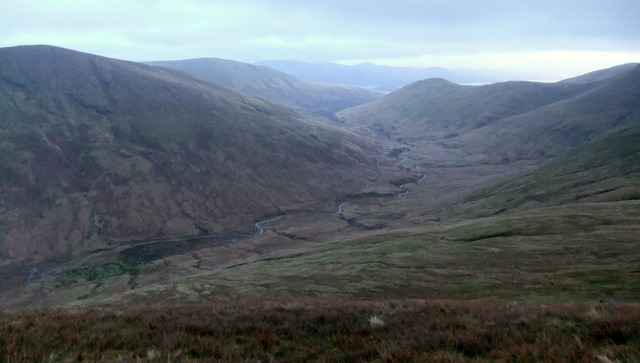 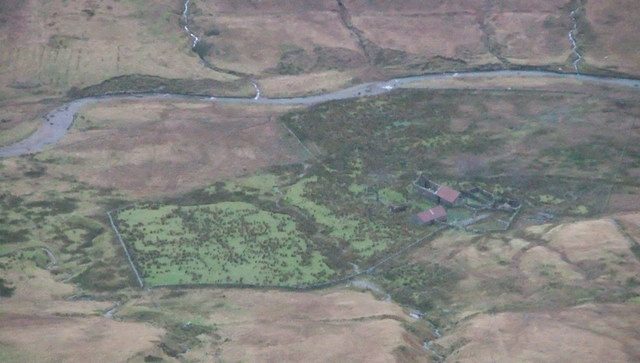 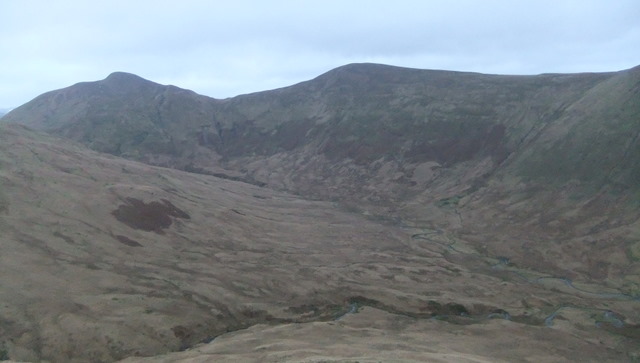 Route to Cruach an t-Sidhein 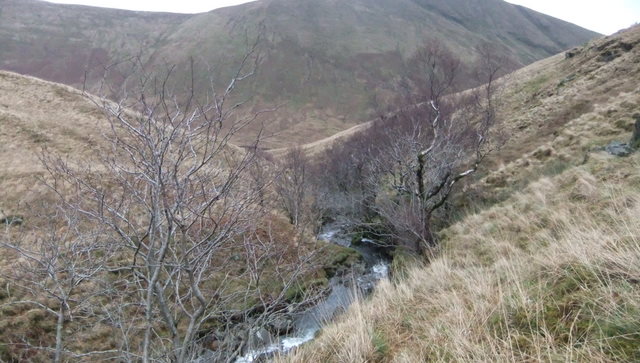 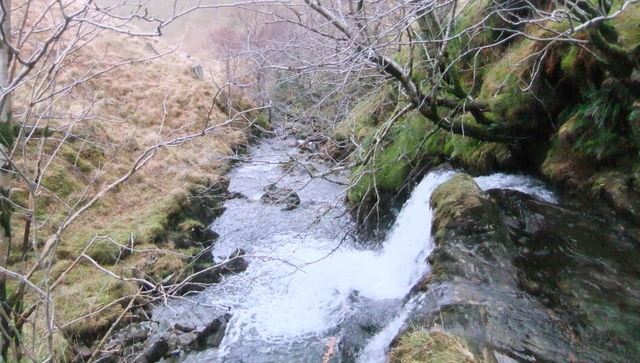 I picked my way up below the rocky face of Creag Tharsuin to reach a point between the summit and the 515m bealach which leads east to Beinn Lochain . This bealach would be the obvious way to reach this hill , I have no idea why I didn't tackle it on a recent trip to Doune Hill , guess I just forgot , it would have saved me a lot of bog trotting in from the south!
The summit is a short pull from here , I had planned to have lunch there but the weather had other ideas and wind and sleet made me hurry south for shelter. 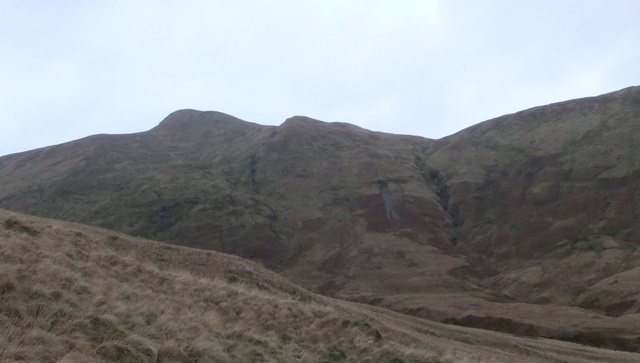 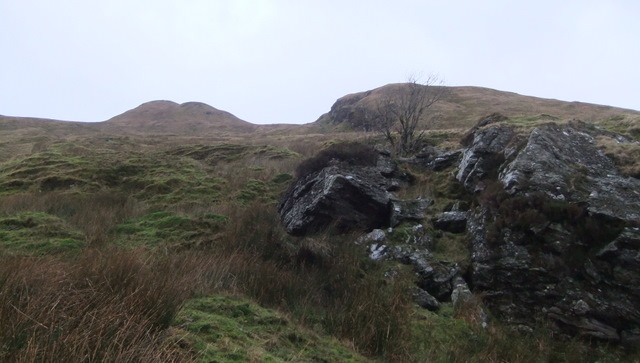 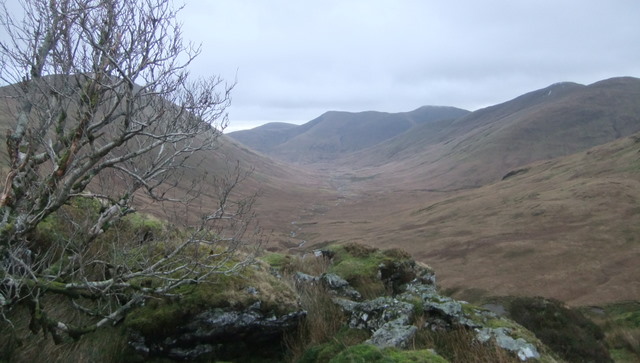 View SE down the glen Summit of Cruach an t- Sidhein From the 332m bealach with Beinn a'Mhanaich I contoured around towards the high pass which leads southwards to Glen Fruin , the going underfoot not pleasant ,tussocks and bog making for slow progress. This was a long slog down the valley , I even considered cutting up onto the grassy ridge of The Strone but eventually I reached the reservoir ,crossed the dam and rejoined the outwards route . Looking back up valley from reservoir

This route is probably not the most sensible way to tackle these two hills , if weather and time permit much better options exist staying on the ridges and out of the bogs , still , a nice wee walk to start the year nice to have these hills so close to Glasgow, like you we went to bed early as well.

Lastofthesummerwine wrote: like you we went to bed early as well.

I hope it's not an outbreak of common sense !

Good to see another report on the Graham in this area. I've been plotting a route to do all 6 in this group from Luss, seen a route but not sure how long it would take. Do you think they're all possible in one outing?

Hi Johnny, I think the northern four are quite a popular route from Glen Luss ; Beinn Eich,Cruach an t-Sidhein ,Doune Hill and Beinn Dubh make a natural circuit . The southern two , Mhanaich and Chaorach ,stand on their own so a good deal of descent and ascent would be involved to link them in , it would be a long day but would be a cracker of a walk , might need a bit more daylight than we have now . I found the valley floors very hard going with tussocky wet ground so the less time spent there the better . It's a lovely, secluded little area , looking forward to your TR ,

Thanks Gavin, i will leave it till the summer and one day that i'm feeling up for it. I have planned escape routes if i find it hard going

Nice report Gavin, the Luss Hills are my locals, so up that way quite often, good wee winter hills

so the six should be doable

Three is as many as my lack of fitness has allowed

What a fabulous walk

Definitely worth thinking about when the weather is so changeable....mince to really mince

lomondwalkers wrote:Nice report Gavin, the Luss Hills are my locals, so up that way quite often, good wee winter hills

so the six should be doable

Three is as many as my lack of fitness has allowed

Thanks LW i hadn't even thought of the eight, the six might even be too much for me but hopefully give it a go later this year.

Jings , I had enough after the two !

Good report Gavin and still a bog fest up there? Hopefully be out again soon and i was in the not sensible club although the dram was medicinal

Hi Dave , I was going to give you a shout but thought you deserved that ' medicine ' . Bog fest for sure !

thanks for posting. ive cycled through glen fruin a few times and didnt realise about these

Hi MT, they are well hidden away , a nice wee corner to get away from the crowds , you could cycle right up to the reservoir , if it ever stops raining !

Gavin99 wrote:Hi MT, they are well hidden away , a nice wee corner to get away from the crowds , you could cycle right up to the reservoir , if it ever stops raining !

its good to know.. im from dumbarton originally and down there a lot.. so will keep these in mind