Had camped by the Aquaduct beside Loch Chuaich last night and woke to the sight of the Caledonian Sleeper heading North to Inverness. A couple of crofters passed me with guns on a Quad Bike as I was packing up and discussed the probable outcome of the days weather with me as I wrapped up my tent. Wet and overcast was the verdict. In the end whilst it was misty and overcast the rain never amounted to much.

Started again like the day before from Balsporan Cottages and headed across the railway at around 9.30am heading for Geal Charn with its supposed 7 cairns for 7 brothers. Within 30minutes I had made the large cairn on the edge of the hill which offers views back into the pass but in truth is quite some distance from the summit itself which took a further 30minutes to reach but offered good protection for a little breakfast.

I followed the high land around to the edges and looked down over Loch Ericht and saw on the loch shore the money and buildings including Helipad of the Ben Alder Estate. Such a peaceful spot to have a mini empire and I tried to keep this in view as I made my way to my second top of the day , A'Mharconaich at 975m at just after midday.

From here my next hill involved the simple task of following the rusty fence post markers that divided Inverness-shire from Perthshire and easy rolling walking up to the massive summit cairn of the dolefully named Beinn Udlamain (Gloomy Mountain) which was my third Munro of the day and I reached it for lunch at 1.15. Quite a fast time I thought for a grand distance of walking.

As yesterday I had seen no-one whatsoever on the fields but as I headed down the slopes and back up to complete my round on Sgairneach Mhor I saw a large party of 12 all in red waterproofs heading down the slopes towards me but the mists swirled thickly around and we never encountered each other and my attention switched to obtaining a decent bearing before the world vanished.

This I happily followed to its successful conclusion of the summit cairn and trig point of Sgairneach Mhor by 2.50 in the afternoon to allow my plenty of time to return to base camp.

I briefly considered retracing my steps and retouching all the munros back to the car. Another idea was to go due north down and then back up to my second hill. I also toyed with the idea of tagging on the Sow of Atholl which was calling to me but my legs were not so keen. So eventually I decided in the thick mists of following a bearing along the rocks and then soothing down twixt the two hills and then picking up the estate track back to the A9 via a 1km diversion to duck under the railway lines and then a noisy end today tramping back 6km’s along the A9 to the Balsporan cottages – reason enough to have considered back tracking in the hills for a little more silence to end a fine long walk. 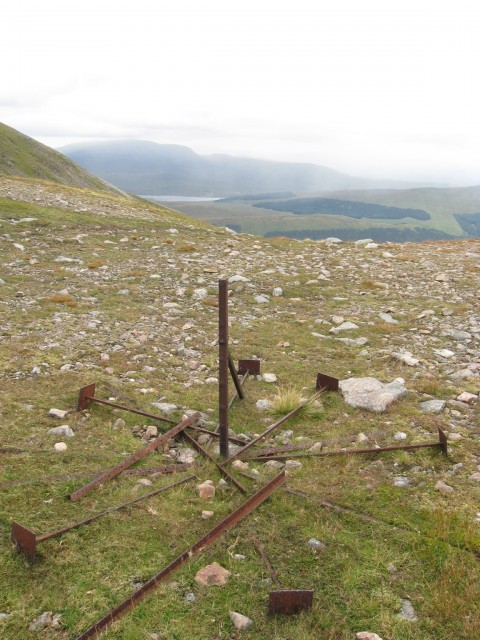 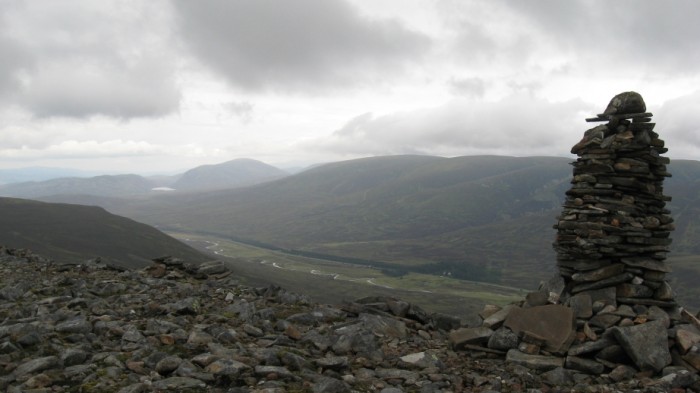 Looking Down To A9 From Lone Cairn