To go or not to go? – That was the question! After days of snow and wind, a weather window appeared and the festive season inactivity/over-eating had to stop and take advantage of this meteorological wonder.
The options were (on Calum’s Munro tick list) Stob a'Choire Mheadhoin & Stob Coire Easain or Geal Charn. Given that the wind alone was forecast to remain and given the former 2’s steep-looking sides to their ridges, GC was the choice.
On arrival at Laggan at 0845, the skies were clearing, as promised. My journey through Aviemore had shown hills streaked brown and white and I was contemplating which boots to wear (nice to have the choice ) The hills North of Laggan were caked in white icing however. After meeting up and transferring gear to 1 vehicle, we proceeded down the road to Garva Bridge.
Strange scenes greeted us – water everywhere! On the roads, in the fields, snow melt was everywhere. The Spey Dam had water cascading through it and the dammed loch above it was swollen. It is a curious body of water – what we imagined a recently flooded glen (for hydro power) would look like: buildings and a bridge disappearing into the water and mounds of land poking up as ‘islands.’
Onto the walk: after donning most items of clothing and my new ‘La Sportiva’ winter boots (Calum already had Scarpa Mantas) we proceeded up the glen. Although not a difficult walk to navigate, we missed the path veering off to the right, to continue beside the river and carried on a 4WD track that took us uphill. Realising our mistake, we contoured past a plantation and rejoined the route further on. Lots of waist-height fencing to breach!
By now the weather pattern was set fair – blue skies and weak sun, interspersed with snow showers – hail-type snow (small polystyrene balls!) As other reports say, the lower ground is quite boggy and the lying snow didn’t help by hiding the worst bits! Further merriment was to be had with legs buckling into deep bowls of snow. All good fun.
After crossing the burn that runs into the river – quite tricky as it was in spate, although there are stepping stone places on closer inspection, we trudged through the snow up towards the nose of the ridge. This was also fun – will it be soft, wet snow all the way? No, it got gradually more sugary, but also with a wind crust. Was it strong enough to support the adult human form? Was it heck?! More fun, then, to be had from trying to walk across it without disappearing from view momentarily. A conversation stopper it was – literally, on more than 1 occasion. Then the ridge...and the storm. This shower was fiercer than the rest. Powerful NW wind, blowing spindrift across the surface of the ground (not into the eyes at this point, thankfully) and falling snow! Gloves, hoods, buffs all appeared from rucksacks and bearings were taken...just in case. Who said this was an easy one?!

Upon reaching the summit cairn, our predecessors had helpfully carved out a large seat from the snow on the ‘leeward’ side. Some lee however. The wind seemed to swirl around the cairn and snow was everywhere in the air. A very quick bite and drink before wet gloves were replaced (bbrrr) and a hasty retreat was beaten. Tough at the top!

15 minutes later, a clearing appeared and the way ahead was confirmed – so much easier when you can actually see it!
Conversation all this time had ranged amongst many topics, as ever. Would our ‘chaser’ from the neighbouring car catch us up (it was threateningly plastered with LAMM and OMM stickers, meaning ultra-fit people!) Crampons were another favourite topic, as Calum had brought his new pair to try out (sadly not the right conditions today, although the axes made an appearance.) My older Grivel G10s were in a hand-made, blue bag – safely(?!) strapped to the outside of my rucksack. Or were they? Aahhh! The bag is missing!
Quick retrace of steps to the last stop – half way down from the ridge, above the last burn crossed...but no sign. I had reattached the bag (oh so well...not) at the cairn, so they must be somewhere between there (not at the cairn – we checked before leaving) and above the burn. On the way up - crampons may be lurking here!

If you find them, please get in touch!
davaness@btinternet.com
All in all, apart from that, a surprisingly good day! Maybe not much of a hill on a ‘normal’ day, but Winter conditions definitely lent it some excitement and required a degree of respect. Thanks to Calum for dragging me out and the usual good craic...and also the photos, when I get them uploaded!

Oops! I hope you find the missing crampons! They could be useful at this time of the year!

Still, it sounds like you had an enjoyable day out in reasonable conditions for the time of year!

Well if you don't get the crampons back someone else will get the good of them I'm sure. I have lost count of the number of hats, gloves and so on that I've aquired over the years. Actually each one reminds me of the place that I found it. One of the most memorable was a mountain equipemnent fleece balaclava found on Beinn Tarsuinn in Letterewe, round the back of Slioch. Still have it but it has now shrunk so much that it fits my wife so she wears it now and again.
We take the camper up usually once a year and wild camp by the side of Spey Dam. Cycle up to the head of the Corrieairack, great place.

Just a shame about the crampons. Hopefully someone finds and returns them...
Geal Charn is said to be one of the easiest Munros, but in winter conditions any hill can be tricky. I did it last autumn and remember the route up as a terrible bog-feast, squelchy and sticky, yuck. Good for ducks, though 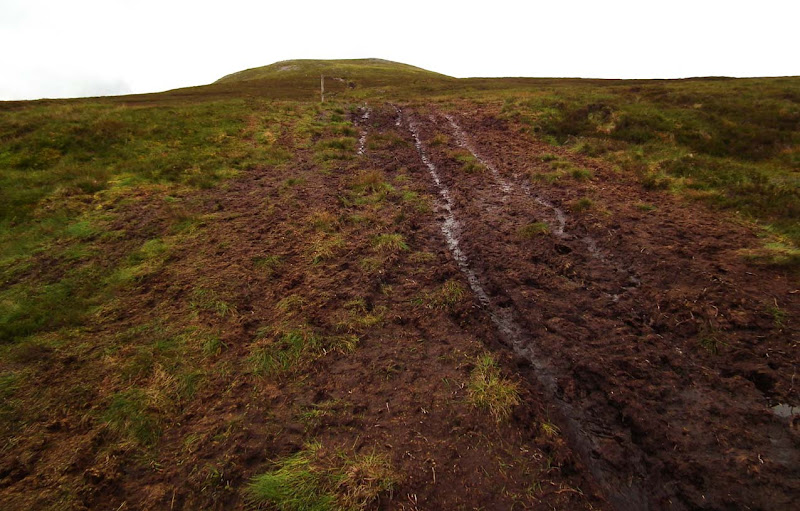 Hope you get your spikes back......... if you do, strap them securely to the inside of your ruc-sac.

Did you try out that bucket seat at the cairn?