Uill ... two weeks of larding it over food and drink and coarse weather has kept me and an cú of the hill

so we hooked up with my caraid Iain and decided on the Monadhliath for today.The forecast was cáic ..ish so we decided on an easy start and somwhere with snow so A Mharconaich and Gheal Charn t'was .

I set out from Ardnamurchan at 5.15am for the 6.20am ferry ...agus that gu dearbh bha an t uisge ann fad an rathad ..you ve guessed t'was raining !

Being on the Tir Mór at Corran it took me an hour to reach Druim Uachdair at Baile Sporran, which in the dark i managed to drive past , only when i reached Dail Na Spideal did i do an unauthorised U turn to head back North ,she is no the most handsome of places to have a house Balsporran

Wee note temp in the West was 6 plus ,dropped to 3 plus in Gleann Speann and finally dropped to 0 at Baile nan Sporran

I hooked up with mo charaid ,got an cú under control and off we went it was dull n damp and kinda sleety or as i would say mossach At about 500 metres in the wind was horrendous ,blowing spindthrift up and it was hard going in the snow which had no an awful lot consistency ! and crossed the raging burn only to have the greatest difficulty getting back across so i had to walk him back down to the bottom before he crossed again .. the hare by this time was at the dram in Dal na Spidal

.... anyway the grian poked her head in for a minute on her way up into the cloud Uinneag an t -side .... a weather window

..... well of sorts ,snow went off but the wind was still ferocious however wee views of the Bheinn Eallair range and a general clearing of murk was in the offing ! 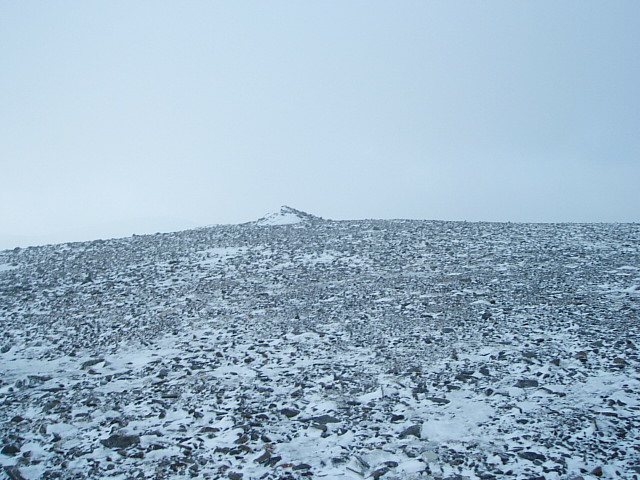 On the summit you could barely stand so we took a quick bearing for the bealach and looked to get some shelter to grab a bite to eat we found a wee bit lee on the way down when the weather changed again ...still gaoithach though but sun The wind chill was erm biting and we did nt hang around long so it was down the bealach and up A Mharconaich as the wind rose to a furious level ..oh and the stinging sleet/snow/hail made a re appearance ! An cú aig an cárn Ach uill bha sin an latha ann an Monadh Liath .... a good day in the hill again with the luck of the Gaidheil giving us a reward for bearing with that hurricane wind and they are no the bonniest hills the Mondaliath/Cairngorms completely different from the West (which is naturally the best). Its interesting A Mharconaich means "the place of the horse" and Baile na Sporan "the township of the purse" there must have been a Tryst (fair) there when the Gael was king of course he still is ...... he can hack the wind I fair enjoyed that report and the pictures Collaciotach, good to see the sun putting in an appearance, you dont really see the wind on the pictures

mrssanta wrote:I fair enjoyed that report and the pictures Collaciotach, good to see the sun putting in an appearance, you dont really see the wind on the pictures

Its a rare rare thing these days Mrs Santa

Bet that wind blew the cobwebs away.

It did indeed , furthest East i ve been

its a very different country but i ll be back ...frequently , although i reckon a lot of the hills in this area is Winter walking ! ...

Good effort in that wind,imagine this area is fairly exposed,gonna get back up that way soon

pigeon wrote:Good effort in that wind,imagine this area is fairly exposed,gonna get back up that way soon

Aye me too farthest East i ve been

enjoyed seeing a bit of sun !!!