With a half-promising forecast for Sunday, I decided to head for some more new hills. I borrowed a car and left the house at 9:15 in drizzly rain. Not what I had expected, and it only got worse as I passed through Carenarfon, Porthmadog and Trawsfynydd. An hour after leaving the house, I picked up the little road behind Trawsfynydd dry ski slope, and passed from the bustling A470 into one of the forgotten areas of Snowdonia, the valleys of the Gain and the upper Mawddach. I had done little walking in this area, but I had passed through here on a number of long distance cycles in the late 1990's, so it was all pleasingly familiar.

Parking up at the roadhead of Cwm yr Allt Llwyd, the only spot of lighter sky I had seen appeared to be hovering right over Rhobell Fawr, which I took as a sign of better things to come. The rain was still falling lightly though, and the temperature was surprisingly mild for January, so I decided that the conditions called for shorts, t-shirt and waterproof to minimise the amount of damp clothing I'd be wearing later.

Rhobell.gpx Open full screen  NB: Walkhighlands is not responsible for the accuracy of gpx files in users posts
I started walking up Cwm yr Allt Llwyd, going as far as the deserted farm of Dol cyn afon before following a farm track up the southern slopes of the valley. This ended as the gradient eased, and I was left with a kilometre of flattish ground to cross before hitting the main slopes of the hill. Some of this was easy underfoot, while other parts were extremely boggy and tussocky. I was in the cloud by now, but navigation was easy once I picked up the edge of the forest. 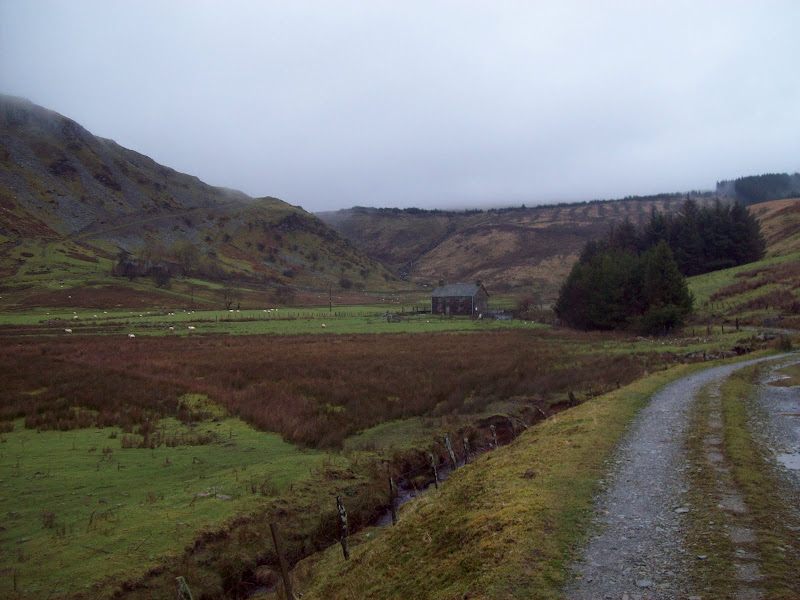 Once the ascent proper started, the going became a little better, and by the 600m contour, the ground was positively pleasant to walk on, with short cropped turf and some small rocky craglets to liven up the scenery. The summit came with little effort, and the crossing of a couple of drystone walls. It was a shame really, as I could tell that this would be a lovely spot to while away afternoon in the sunshine. The weather hadn't changed at all, and it was a little breezy right on the summit.

The summit of Rhobell Fawr - has probably seen better weather! 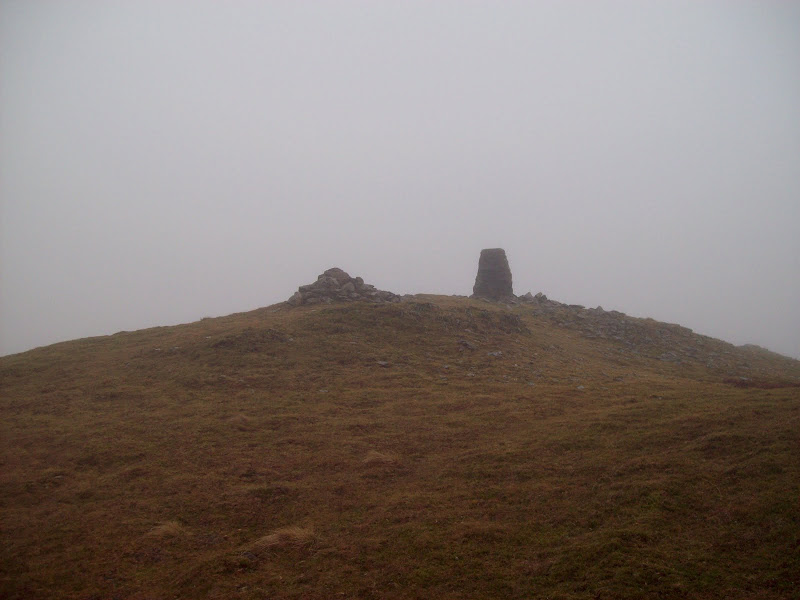 Rhobell Fawr must be one of the least climbed 2000'ers in Snowdonia, and it would appear that most people who do climb it approach from near Rhydymain in the south. This would certainly be the way to keep the bogginess to a minimum, although my route had a satisfactory pioneering feel to it. My dad had declined the offer to join me today, as he had no optimism for the weather forecast, and had once been up here before in the clag. However he had never been up Dduallt, which was my next destination.

I tried to be smart and navigate by walls and fences rather than getting my compass out. I messed this up though, by crossing the wrong wall too high up, before working my way west unecessarily. I sensed something was wrong, as I knew I shouldn't have been walking into the wind, and the wall I had expected to follow never materialised. Soon a vaguely familiar looking fence loomed out of the mist and I realised that I had crossed it on the way up. A quick bearing confirmed my error, and I re-ascended a short distance to the corner of the forest before getting back on track. Some rough ground and a couple of small waterfalls enlivened the route before I met the track that passes through the col. 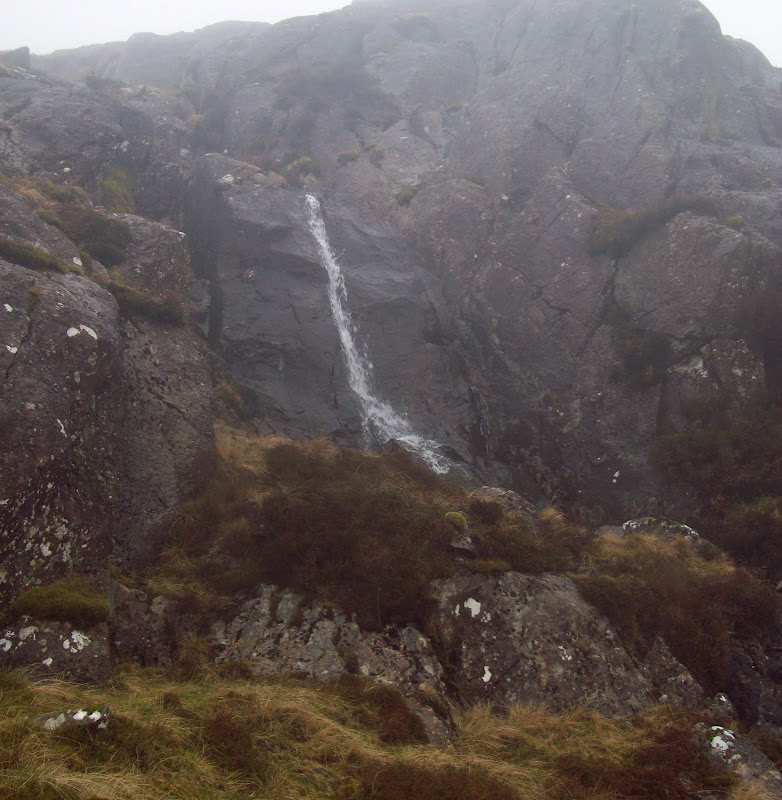 I remembered reading Poppiesrara's report of these hills, and had a notion that there was an easy way through the forest to Dduallt. I even guessed which ride it might be on my map, but I had no idea whether to turn left or right on the track to reach it. Therefore I tried the smart-arse route and ploughed straight through the forest. It was undoubtedly the boggiest, most dense conifer plantation I had ever tried to force my way through, and I was glad to stumble on the aforementioned ride after a few minutes. Going off-piste for the entire forest section would have been extremely painful!

While boggy, the ride was easy walking, and even had a signpost and a stile over the fence at the far end. I left the forest and entered a bewildering area of lumpy ground with bogs, streams and outcrops, still in the cloud. It had finally stopped drizzling though, so I stopped for lunch, still picking bits of twig and pine needle out of my hair and clothes.

The route ahead was rough but interesting, and I would have loved to have had some views as I weaved around the outcrops. After a short while, I broke away from the edge of the forest and moved onto the south ridge of Dduallt. This was ill defined, and split up into lots of mini-ridgelets until higher up, when I met a fence. Following the fence along the ridgeline, I almost missed the summit cairn, which was on the other side.

Following the forest edge towards Dduallt: 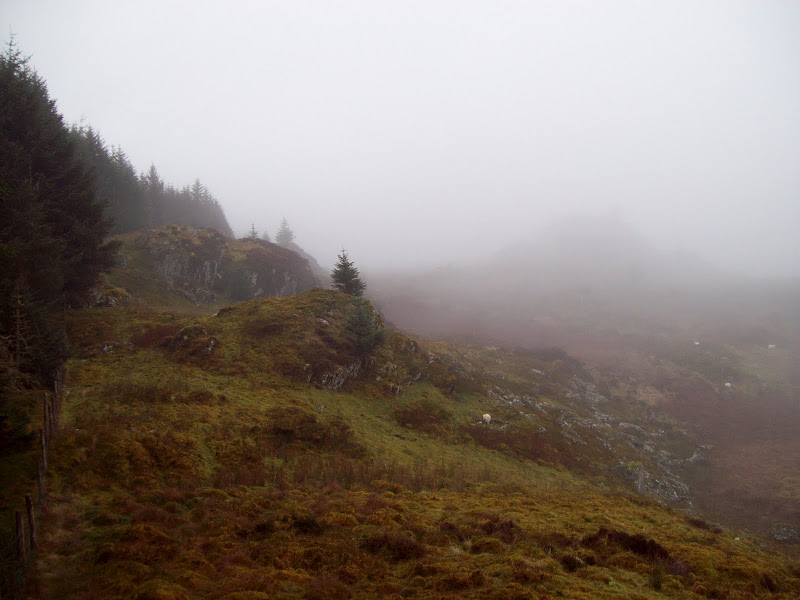 The summit was on the edge of a broken line of cliffs, which looked quite interesting, had I been able to see them properly. I could vaguely make out a spike of rock which looked a bit like the Canon of Tryfan sticking out, although it was so misty that it wouldn't come out in a photo. Nothing to stop for, so I made my way down the north ridge, which was rough, but not as rough as the ascent route. Heading west from the toe of the ridge,I picked up a well made but little used farm track which led across the infant Mawddach (interesting wade, but my feet were already saturated) and back down to Cwm yr Allt Llwyd. The cloud clung desperately to the ground all the way to the final descent into the cwm, at which point it cleared a little. There was even a brief glimpse of blue overhead. An easy walk back to the car had me finished before we had even started yesterday. 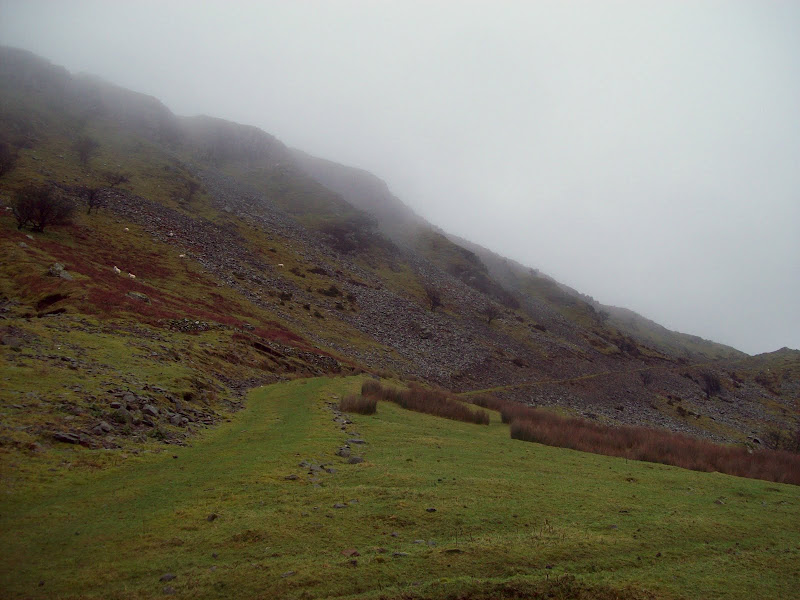 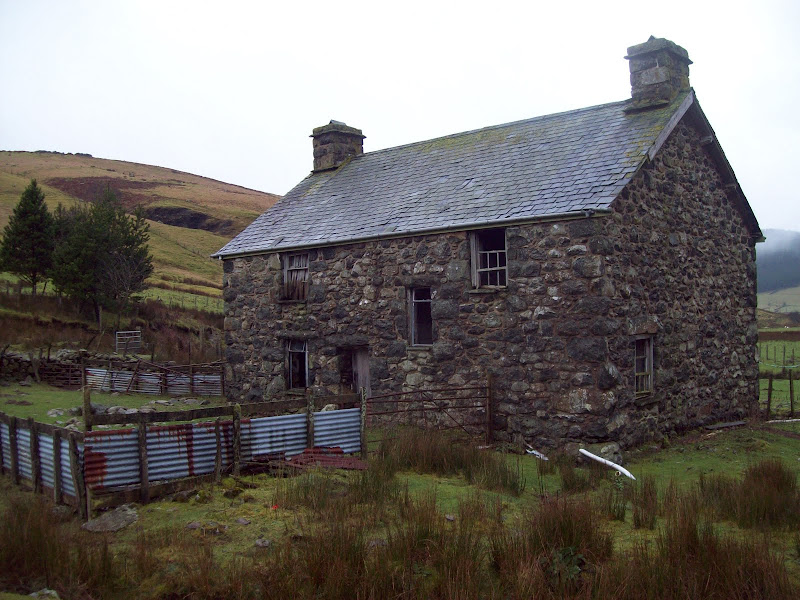 On the drive out, the cloud was beginning to break up, and I stopped for a couple of photos - the only half-decent ones of the day. 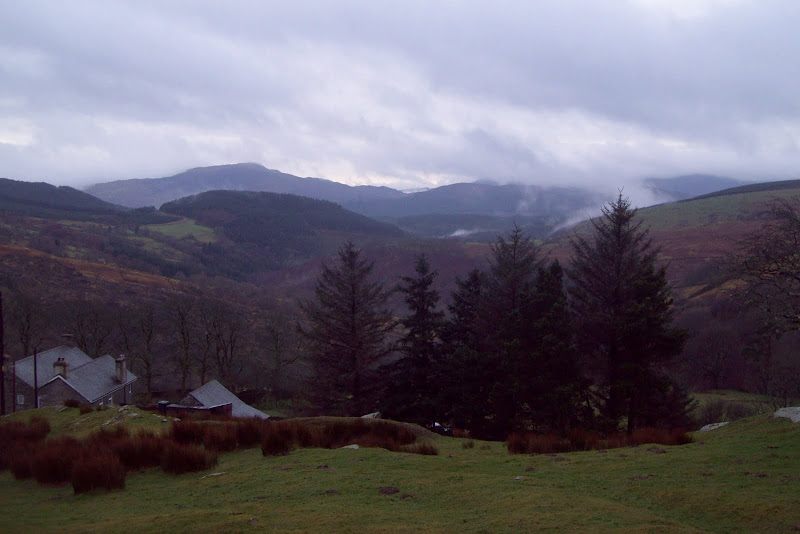 Since things were clearing up, I thought I'd take care of another summit very briefly.

Gallt y Daren is possibly the least exciting 2000er in Snowdonia. I have seen it added on to a round of Arenig Fawr and Moel Llyfnant, but I couldn't see myself doing that any time soon, and I probably wouldn't want to include this one anyway. So I decided to make the most of my driving and go for some out and out bagging. Luckily one of the features it does posess is a road running to within 100m of the summit, making it one of the easiest hills in the country.

Bwlch Pen y Feidiog had been a favourite to cross on the bike when I was younger, and I had camped at the foot of the hill a couple of times on multi-day rides. Things had changed greatly in the last 10 years though, with the felling of all of the forest which used to engulf the climb to the head of the pass. While this has made the immediate ground look scruffier, it has certainly opened up the views. I was briefly hopeful that the cloud might lift, but by the time I was parking at the upper Forestry Commission boundary, I was in the clag again.

our_route.gpx Open full screen  NB: Walkhighlands is not responsible for the accuracy of gpx files in users posts
Leaving my rucksack in the car, I set off up the old forest edge until it ran out. Then I took a bearing over rough grass, and in no time at all was on the lower summit of Foel Boeth. Little excitement here, so I pushed on to Gallt y Daren, arriving less than 20 minutes after leaving the car!

At least this had the decency to have a little outcrop on the summit - something to liven things up a little. There also appeared to be the remains of a telegraph line following the crest of the ridge - somewhat odd. 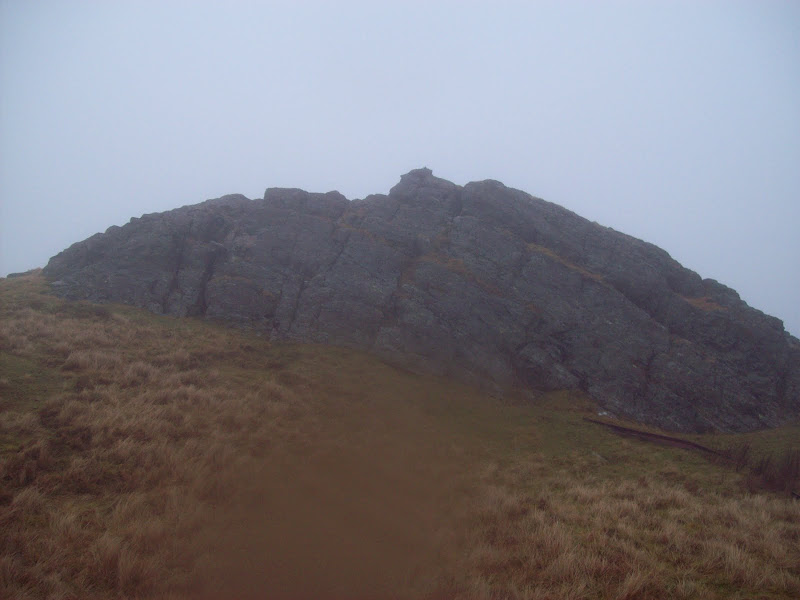 Telegraph remains - there were a few of these: 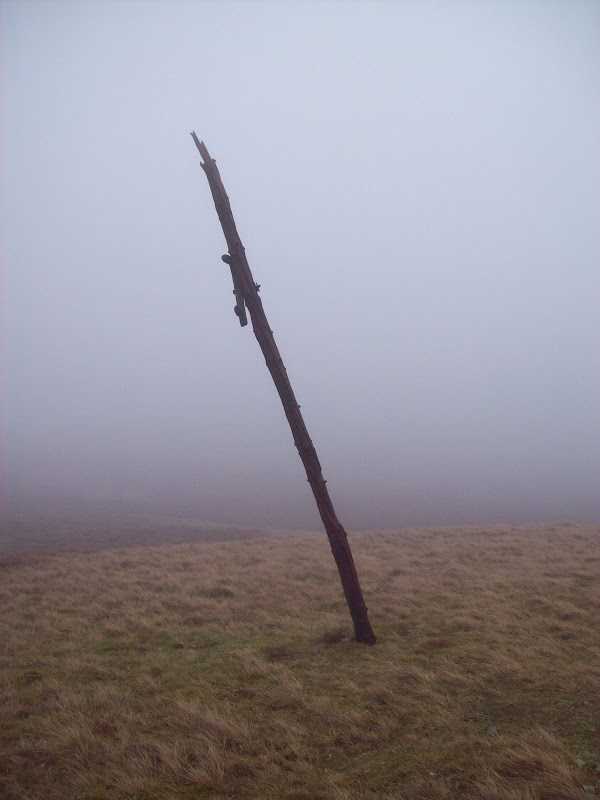 I took a bearing back to the forest edge, and was back at the car 35 minutes after leaving it. Shameless indeed! Again, the best photos were taken on the drive home, where the cloud did strange things, covering some hills completely while exposing others. I had agreed to meet my parents in Pete's Eats in Llanberis for tea, and was lucky to see some of the best weather of the day while driving up Nant Gwynant and over the Llanberis Pass.

Towards the Rhinogs from the Bwlch Pen y Feidiog road: 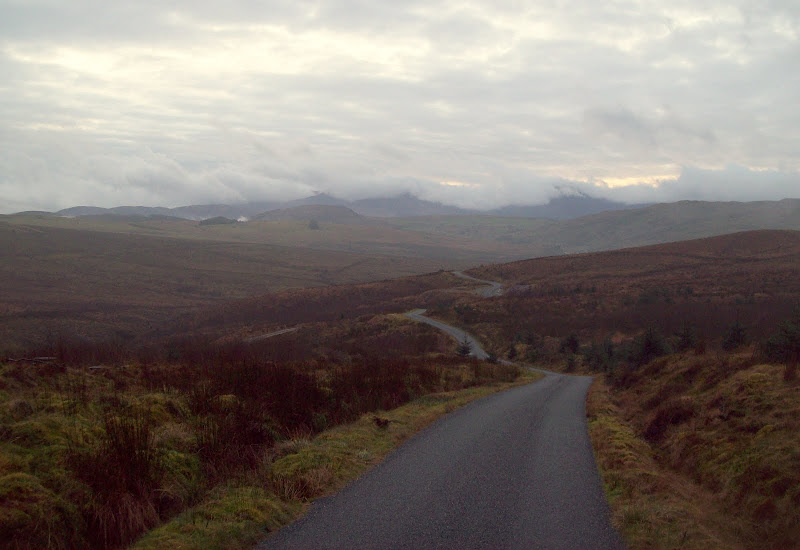 Looking down the Gain to Cadair Idris: 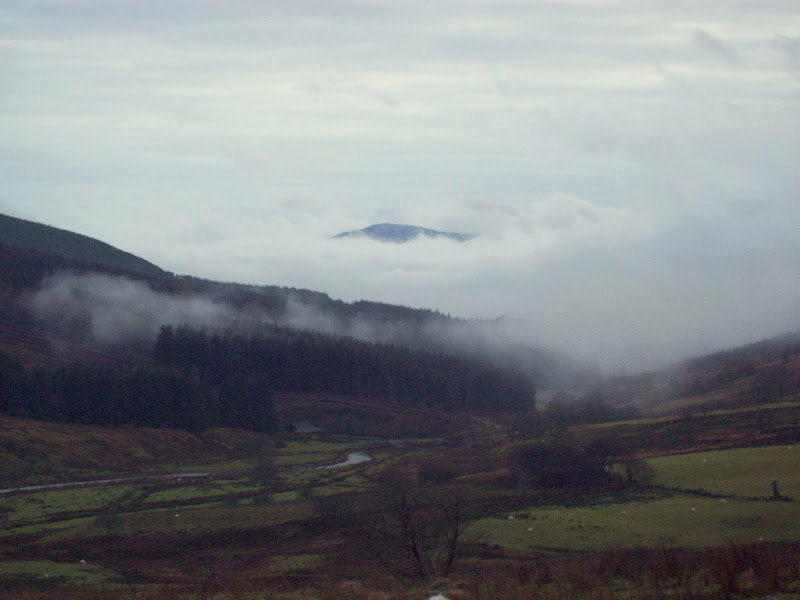 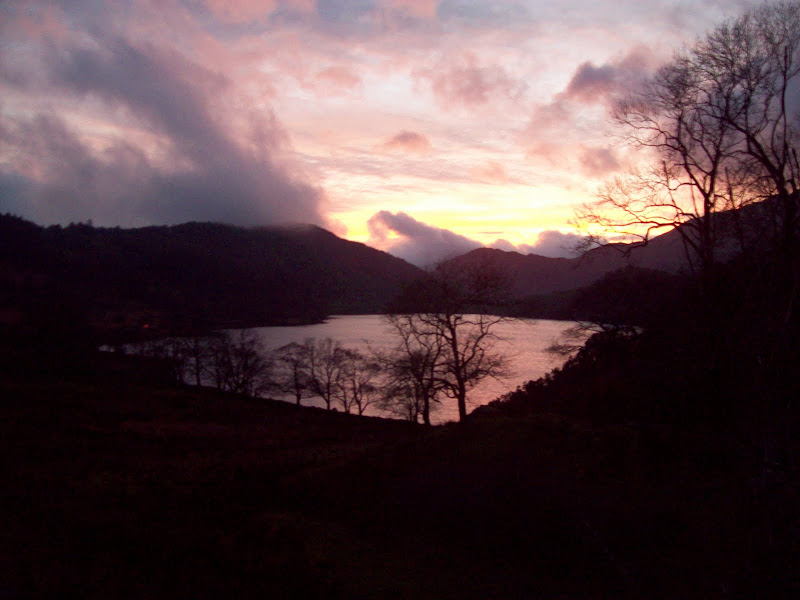 Good stuff again, Malky. I put off Dduallt and Rhobell for months waiting for a dry spell, so it takes a certain sort of bravery (if that's the right word?) to take them on at the moment...!

With hindsight, definitely the right option for Gallt y Daren, I think - it's a fair enough little top in itself but the route from Moel Llyfnant isn't too exciting and the long descent north is downright grim. At least you've 'ticked off' some of the worst of Snowdonia on a day when nothing would perhaps have seemed too wonderful.

Great report(s) Malky, I laughed at your 'off piste' efforts in forest on day one as it reminded me of the time I did the exact same thing and cursed every step of the way whilst doing it

That pic entitled 'Across Coed y Brenin to Y Garn' has a weird cloud on it away in the distance.

Doesn't look to be much sign of winter over there yet, Calgary is the same..thankfully

Well done Malky, and thanks - definitely a lot of info I can use here. Not been up these yet.

I might finally be able to get my boots dirty this coming weekend.

Cheers all - I hope to up the quality of my reports over the coming weeks. I almost didn't bother writing this one up!

I suppose I need to face the fact that if I've got a limited amount of time to finish off the 2000ers, they can't all be in good weather!

Keep meaning to re-visit these one day....you might have guessed it....for a wildcamp....but in better weather